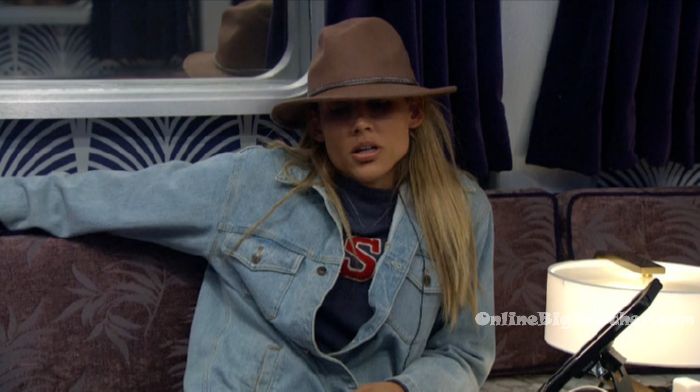 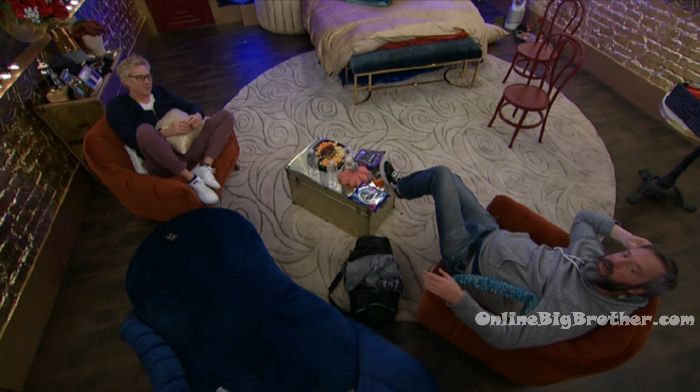 7pm HOH room. Tom and Kato. Tom – God, it would just be so funny if the power somehow came into this right now. Kato – that would be hilarious. Tom – There would be some twist like if within an hour Lolo is up on the block and walking out the door. It would be sweet revenge. I don’t think its going to happen. The best thing about today was when .. I thought it was pretty cool when I walked into the gym and told Ricky I know you know I’ve been trying to backdoor you for the last two weeks. We can stop being fake. That was pretty cool! Kato – 100%! Tom – I thought he would have respected it more .. you know?! All this talk about keeping it real. Kato – I thought you did it in a real admirable way. What did he do? Tom – he started yelling at us trying to kick us out of the gym. I thought everyone was going to respect the fact. Like okay we know your alliance isn’t real. Kato – I think how you did it was great. Tom – I thought it was real. Kato – I really don’t want to see anybody. Tom – lets enjoy our room.

8:30pm Bedroom. Joey and Tamar. Tamar – I have a problem with her.. She doesn’t understand that this is a game and we’re not selling girl scout cookies to her. Joey – I know. Tamar – but you voted for me in the last time. And my whole thing is I feel that you’re an excellent person. If I vote you in, I’ve got to feel that I have an ally as well. Joey – I know, people would be flipping like crazy around here. The only reason I voted for Ryan was because I knew it was 6-1 .. you know what I mean? I knew it was not even close. Tamar – would you have me as an ally?! Take me to the end? I would take you. Joey – of course. I’m cool with that. I’m not messing around. I don’t play, you know what I mean. They fist bump and Tamar heads to the kitchen. 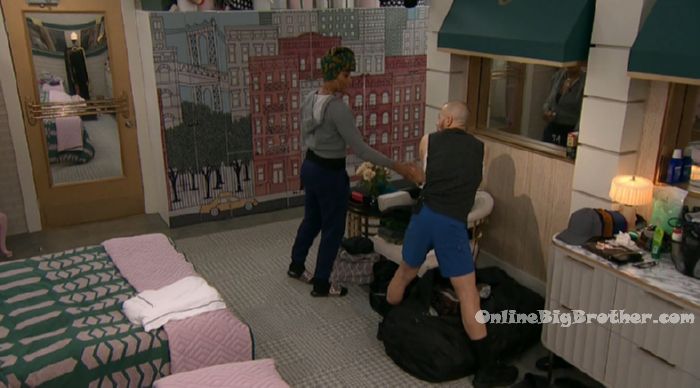 9:15pm Lounge room. Kandi, Lolo and Tamar. Lolo – since you’re the only one talking to him.. Tamar – I’m not talking to him. Lolo – that’s not an attack. Tamar – I don’t like him. I don’t f**k with him. I don’t like the sh*t he says. Lolo – what I am saying is he came into the HOH room … and if they don’t go or whatever.. at the end of this game there is a 12 person vote. And they will not win. So no matter how long they stay in this house if they even make it that long… There are 12 people that have to vote for them and they have f**ked their vote. We’ve been through two evictions .. and everyone saw what happened today Whether they cut the live feed or not everybody saw how they acted as grown a$$ men. There is not one lady here …that would vote for them. And also, Nat gave them that first win. 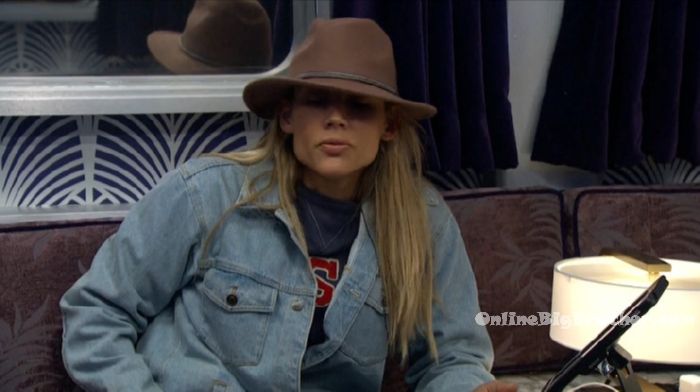 10pm – 12am The house guests are showering and chatting about random things.

No Longer Literally, But FIguratively

Lolo, Loco, Columbo, I’ve gone full cycle. God bless her, but I’m done. Not a fan of Tamar, but don’t drink the Koolaid; that girl is lying to your face. You can’ trust her and she can’t trust you. Call it a frickin’ day.

What i consider to be facts:
fact one: Tom and Kato tanked their own games, but despite accelerating the demise, the actual tanking began the minute they became Lolo and Nem’s fourth or fifth ride or die alliance in two weeks (big alliance, final four with Ryan and Jonathan, girl’s alliance, and the four that became five with their secret side alliance Ricky being shoehorned in). Going ride or die with people you KNOW have been in more than one other ride or die alliance (and voted out their ride or dies twice now) in such a short time span is a game killer.
fact two: miss Cleo should be far more offended than Tamar. psychic and psycho are not the same thing. I don’t think the miss Cleo thing is ‘racist’ as Tamar claims. more a statement of questionable fashion choices and exaggerating / overacting.
fact three: be a lot less drought in California if joey didn’t take hours long grooming rituals. Batman? aiming too high; he should try out for Jason Todd. I’m sure people would pay to see joey, the joker and a crowbar scene alone. dare i say ‘whoa’
fact four: any time Tamar is the linchpin swing vote in your plan: you’re playing wrong.

It’s like a house full of Vanessa’s various phases.

Lolo messes every alliance .she HAVE to go!! Natalie stay away from her

Natalie needs to go too, preferably in DE…. she isn’t as smart as y’all give her credit for…. she’s Loco’s yes girl and is easily swayed by her. Oh yeah, Ricky is a dicky….. at this point , Joey ftw…. whoa f**kin’ whoa

So hilarious that LoLo thinks she’s a lady. Ladies don’t act like she does. LoLo needs to go!

“ Lady” Loco? Give me a fng break…. she will surely be a legend in BB history, and not the good kind….. Ricky is a dicky and purple haired Nats is not as smart as some of you give her credit for… I’m seeing her as Loco’s bi*ch , gets easily swayed by her crazy psycho thoughts and paranoia…. Tamar is pathetic, even more so than Mama Lohan, Kandi bores the snot out of me…. as it stands now, Joey ftw…. whoa fng whoa

Yeah we heard you the first time. You’re starting to sound like Loco with her I’m an athlete every 30 seconds.

No Longer Literally, But FIguratively
Reply to  Festicular Logic

The “Whoa Ship” has sailed.

Can we all agree on this? Lady Lolo will most likely die a virgin

She just needs to get laid….full of aggression, let it out!

Not that there's anything wrong with it
Reply to  Festicular Logic

I think Lolo is gay.

Joey is the only one worth keeping. Lolo is bipolar!!!! Nat is a follower. Never have cared for any of the Braxtons,especially Tamar. Kandi just fake as hell.Tom and Kato got too cocky and blew up there own game,also voted out sweet Ryan. LL ‘s mom,well enough said.They got rid of all the good ones. Joey I’m pulling for ya.

Joey? Are you kidding me?!!! You mentioned everyone else’s problems but forgot Joey changes his pillow cases 2x a day and sheets every morning, takes 3 hr showers, blow drys his skin before and after a short, runs the blow dryer during his shower and when he uses the bathroom, picks his skin how many times a day, wipes down his skin with antiseptic all day long , lays paper towel down to do push-ups to avoid touching the floor, should I go on? The whole bunch of them have their quirks but I think he has some serious issues with his OCD

The paper towel thing makes sense, that floor is always nasty because it’s so many feet all day long and rarely does a mop touch it. If they had white socks on for just a few minutes we’d all see how dirty that floor is.

I wondered about that watching after dark. Does he really run the hair dryer while taking a shower ? Has he explained that ? I couldn’t figure out what the noise was when he was showering. But. With all his OCD. He’s at least a nice guy it seems and is trying to turn things around and play the game. He could be so much worse. I actually kind of like him and hope he stays a while longer.

Lolo is responsible for a lot of negativity in the House.
It was Kato who insisted Ryan be backdoored. I know that’s the game..but Ryan couldn’t play in HOH or the Veto…and he got on with everyone..It wasn’t fair IMO.
Moving on from my disappointment…Tom and Kato definitely messed up.
Tom is still going on about winning everything and it’s all going to go his way.
He needs to be realistic. He’s living the pipe dream.
Kato is being hung out to dry. Lolo is a piece of work. Every day she starts something. Today apparantly she started with Tamar again. Over the cost of lamb chops and fish. She is so full of anger and is so antagonistic.
Nat needs to jump ship quickly.
Tamar of course is quick to take the bait. And is a loose cannon. Her facial expressions are really bizarre.
Dina is just…..Blah.
So is kandi…They just add nothing to the game.
The only 3 I’m rooting for are Nat, Joey and Kato.

Not rooting for Kato, but I am OK with Nat. I want Joey to win.