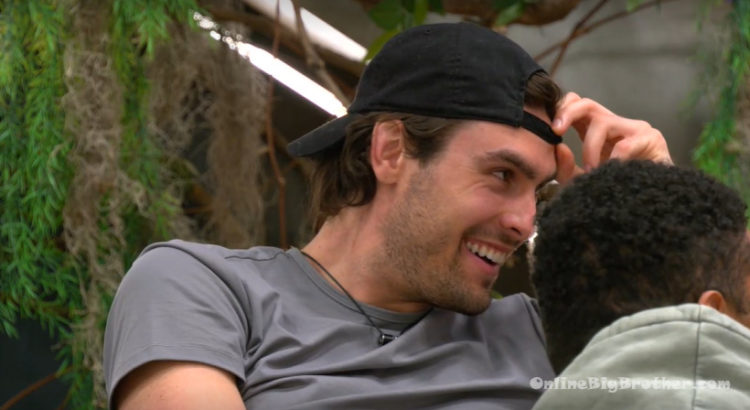 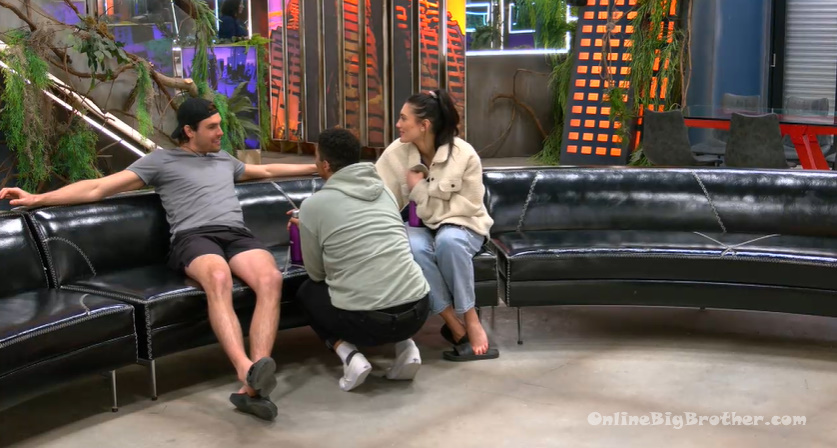 11:45pm Kyle, Austin and Breydon.
Kyle – when you were waiting for the setup? Breydon – yeah. They were like we’re going to have to dive in there. Kyle – so they’re probably nothing. Breydon – no they’re something .. I don’t know what. Austin – no, they found probably like 20 right now. Kyle – what?! Breydon – there are tons. Kyle – I just found it and then I showed Ron .. and then I got called immediately. He didn’t know until just now. Austin – I saw you in there going like this. Kyle – yeah I was in there with Vic and I just looked at it and slid it into my pocket. What are the other ones? Austin – there’s a lot. And they’re all colours. Kyle – are they all 065? Breydon – no. R40. Austin – N41. B13. G12. Kyle – do you guys remember all of them? Austin – the ones that I stole. We found a lot! Kyle – when did you first find them? Like early, early? Breydon – yeah. Kyle – so I’m late to the party? Austin – yeah, we’ve known for over a week for sure. Kyle – did you try to take them out? Austin – yes. Breydon – yes, that’s what I’m saying we did the same thing. Austin – I had four in my suitcase. Kyle laughs. Breydon – when she was HOH. Kyle – come on, that’s hilarious. I just found one and I was like what the hell is this? Do you think its something. Austin – yeah. Breydon – of course. Austin – why would there be random bingo balls?! Kyle – I can’t believe you had four in your suitcase. That is good sh*t! Breydon – I don’t think it would be a secret veto because.. Kyle – yeah because then why the hell could bring them up. God! I find it two weeks later and I think I’m awesome. He laughs. You guys are jerks.. why weren’t you telling me? Austin – I was going to eventually. Kyle – oh yeah!? Austin – we actually were .. we just needed to know for sure. Breydon – Beth doesn’t know .. she keeps saying there’s something with these balls in this room. Austin explains how she took the four but was told to put them back. Kyle – you’re such nerds! 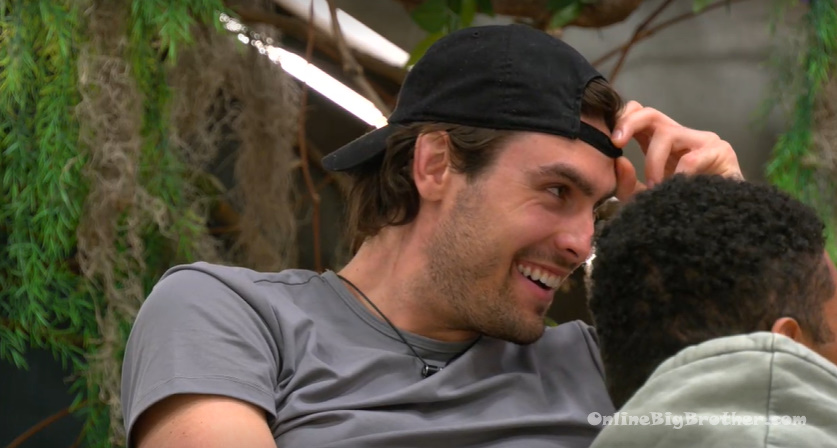 Breydon, Kyle and Austin head into the games room and talk to Ro about the balls. Kyle – I’m going to be looking for a secret POV all week. I’m going to be grinding! There is like a 5% chance this is just a smoke screen for a bigger play. Ro – I’m calling your parents when I get out of here and I’m starting a Kyle fan club. Kyle – there is still hope. There is still a little bit of shimmer. We still have the votes if someone else goes up.. that’s not Breydon and Austin. At the end of the day if we win a comp .. we both might stay. Ro – my only concern is him putting Tera up. 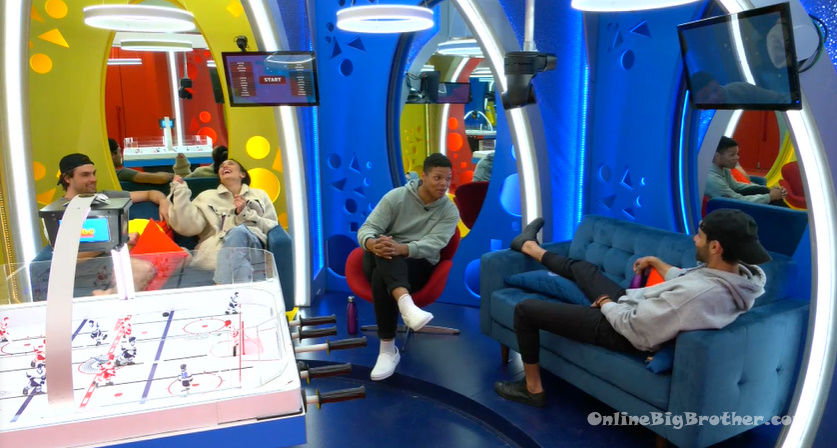 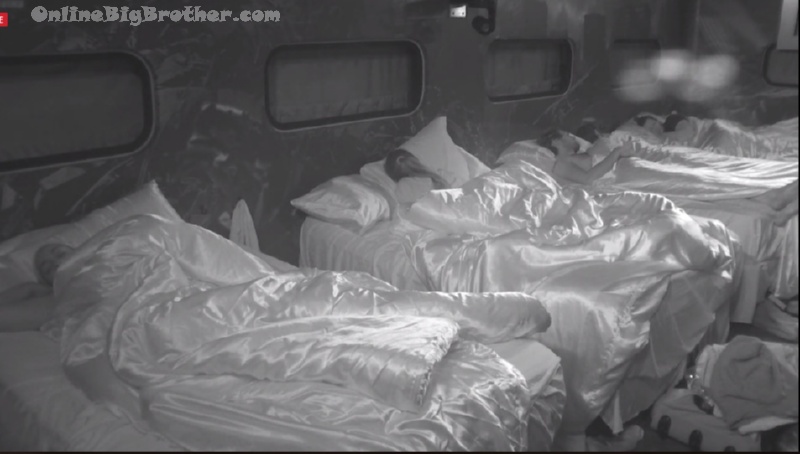 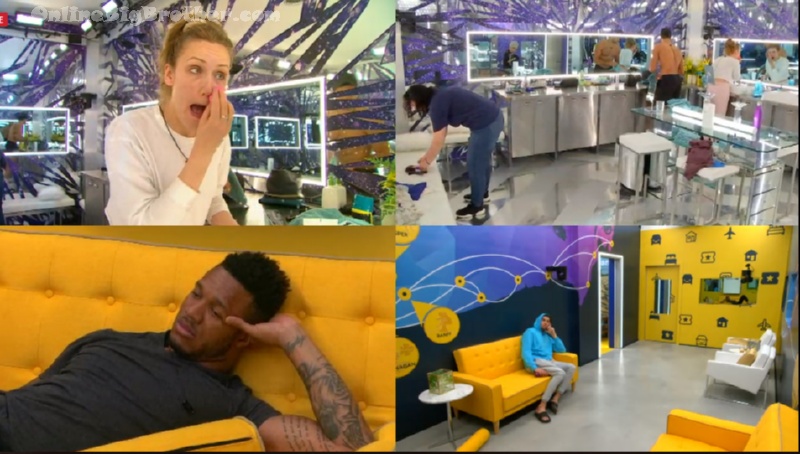 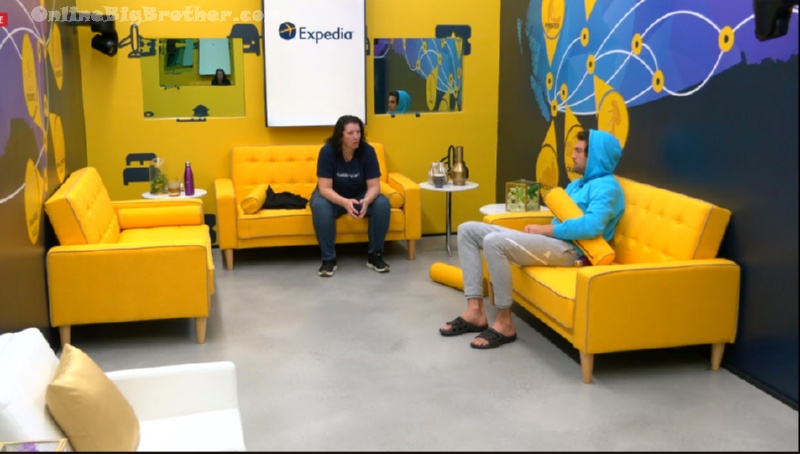 10:09 am Kyle and Tina
The expedia room is open again so everyone has been staring at the screen
Kyle asks Tina if he gets houseguest choice should he pick her.
Tina says sure she wants him to pick who he thinks is best for his game.
Kyle is unsure who the target is. THinks it’s Ro but then second guesses and thinks there might be a backdoor plan.
Kyle hasn’t played in a POV yet.

Kyle – hopefully, the draw is good.. Me Ro and two of you, Austin, Tera, Breydon, and Vic.. that’s five.

Imaginary scenario. Bouncing it off the wall here with the question: would it work?
Someone wins veto.
Kiefer threatens to put their buddy up if the veto is used.

Would the counter threat of revealing Kiefer was in on the LaToya project from the hop with the role of playing extra mopey to make LaToya and the boys more comfortable work?

He revealed it to every one of the Oddballs after promising Vic he wouldn’t say anything.
They all know. He even told Kyle.
Would the threat of revealing to Jed, Ty and Beth that Kiefer was in on the plot from it’s inception be something that would keep Kiefer from going through with his threat?
Tera already revealed that the decision wasn’t last minute made on Thursday. They just don’t know (or possibly don’t believe?) Vic’s level of involvement, and don’t know of Kiefer’s involvement.

Seriously. Since the game is already being played hard and messy, what’s one more mess? Probably should have been used by the nominees before Kiefer made his decision to keep him in check. I mean, Tera’s gripe that they saved the guy who is doing shots with the people that voted him out is valid, and should have been a clear sign that the gloves had to come off in nomination talks.

If the Karbs trusted Vic enough, she could be used as the veto winner by proxy that doesn’t have a partner they can threaten. They don’t. THAT whole kettle of fish we’ll only get the episode edit to tell us about. and it’ll be skewed however storyline sees best. And thus far, given the skew of the global articles… It will have a pro sunsetter bias. Believe me, they aren’t really even trying to hide it in terms of preferred storyline. HEAVY SKEW.

Okay, in all honesty, I just don’t want a Kiefer HOHITIS edited into hero week, because I don’t really respect how he’s played the game from a game tactical analysis perspective.

For anyone counting, they started with 160,000 balls in the ballpit.

So is that the back half of the expedia room (the secret part through the elevator doors)?
If it’s been opened as a nothing… that’s quite the let down.

I can see the storyline abberation coming where the sunsetters talk themselves into leaving Kyle and Ro together in the game and taking out Austin instead. It wouldn’t be much of an abberation really, it would be protection for their Paras edit, because Austin has the whole Beth hate going a lot.

Yup. Beth and Jed are already plotting how to keep both boys in the game by throwing them the veto and getting rid of Austin.
That’s right, not even 24 hours after Kiefer told the three one of the boys has to go because both will be out for him if they stay… they’re saying screw that, let him fry.

I think I just heard the weirdest thing.
Au/Brey continue talking after Ro leaves. re: veto.
it was cut off to follow Ro in a chat with Jed.
but…
did they say they still trust Victoria?
whu?

sunsetters seeds of doubt plan might actually work this week for one reason only:
last week the oddballs compared notes as a pack.
this week to draw off attention of an alliance they aren’t all meeting up to discuss the shenanigans.