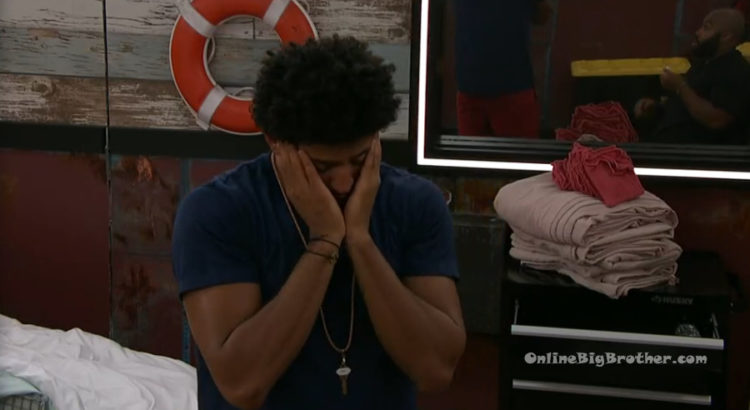 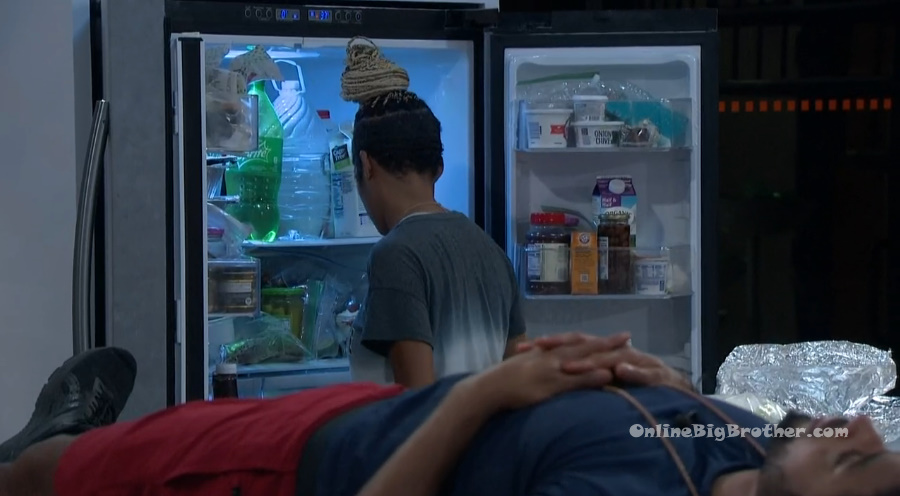 9:57pm Kitchen – Xavier, Azah, Tiffany and Kyland.
Kyland – this is the heaviest this necklace has been all season. Tiff – yeah because now you’ve got to do something we ain’t had to do. Ky – tough game. So what I am going to tell everyone. I think everyone is tired and hungry .. I don’t know what time noms are going to be tomorrow but I think all of us could rest and enjoy tonight. My hopes would be … I think that I would like .. what I would appreciate and it is up to everyone’s discretion is like literally kind of going back to week 2.. just a five – ten minute check in. As I process through the night a little bit and go to bed. I would appreciate it but nobody has to do it. Xavier – do you want to do that before or after you get your room? Ky – before. So maybe starting at I don’t know 10:30pm. Hannah – are you excited for your letter? Ky – yes but its just heavy. Tiff – heavy is the crown.

10pm – 10:27pm Havenot room. Big D talking to himself.
Big D – I can’t! I had it! These little hands had it. Damn. How do I continue. I don’t know. I am so …damn! I could have won that comp! The lord didn’t want me to win so I have to take it with a grain of salt. If it wasn’t meant to be, it wasn’t meant to be. Another comp I lost, another week I have to go.. Ahhh.. get your thoughts together. Pick yourself up! Don’t lose focus. I could still win this game! I don’t know how but I have to find a way! So beat right now .. I am losing constantly. I could have won that comp. It was a f**king egg! What is wrong with me!? Why lord am I not allowed to win anything! Why!? Ky joins Big D. Big D – its your win. I am not taking your win away from you. I am my own person and I had my opportunity. I did not follow through. Ky – I did take that win away from you. Big D – you didn’t take that win away from me. Ky – but I did! Big D – no you had an opportunity to win.. this is an individual game. It is on me. I am very happy for you. Its just hard for me .. because I was almost there .. for the first time in this game I thought I could almost beat everyone. Ky starts crying. Big D – at the end of the day you have to do what is best for your game. Ky – you had it. Big D – I saw the letter .. I saw the pictures.. I just took too long. It is just very difficult. If I go farther in this game I don’t wee myself winning. At the end of the day you won and I just have to make sure I have safety with you. Ky – yeah. I didn’t want to win. I didn’t want to be the first person to take a shot at all of you. Big D – I am happy that at least you won. Ky – I know I just hate it. It just would have been so much easier .. you could have done Tiff and Chaddha. Big D – What do I have to worry about. Ky – I would say as long as we’re still honest .. you have nothing to worry about. And I have no reason to believe that you haven’t been honest with me. Big D – The girls think that you and X aren’t going to get along. Azah isn’t coming after you. There are two people that haven’t been on the block. Ky – no I get it. Big D – Tiff has already threatened us. Ky – because of the next veto .. we can guess what it is (BB Comics). I know who is good at that and who is not. You’ve been loyal to me and I’ve been loyal to you. I am not planning on telling anyone they are good but if I was to tell one person it would be you. Big D – same. I am just f**king pissed. I can’t! I said I was not going to cry. I finally would have had it. 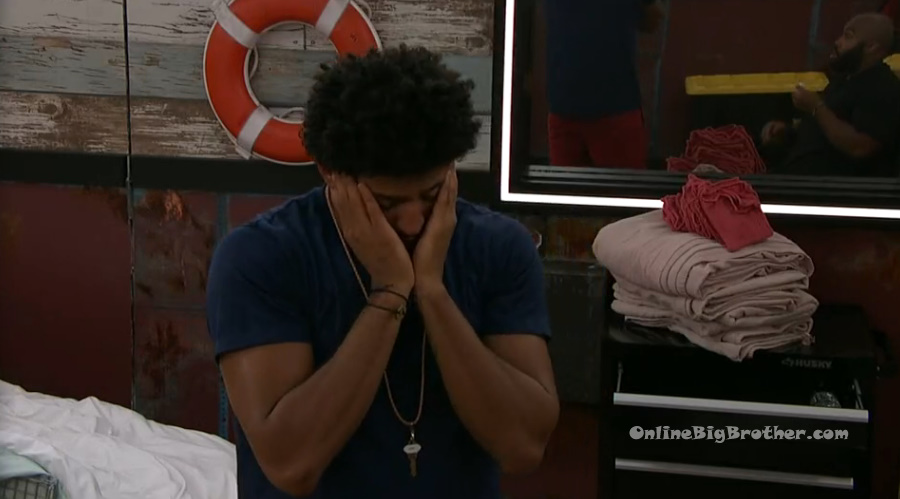 10:35pm – 10:45pm Storage room. Kyland talking to
Ky – I meant it when I said I wasn’t planning on sinking that last shot. I did not mean to get this. I was like this is the best case scenario. I do not have to make this move against the girls. More specifically against Tiff. And that is devastating to me because I wanted to help, I did not what to be in this position. And I think I would have been good this week. 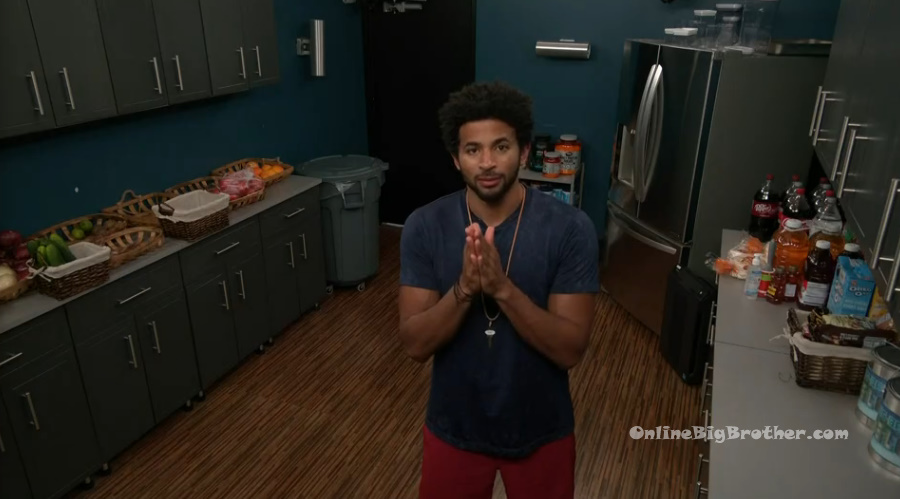 Show your support 🙂 Without your support this site and these spoilers wouldn’t be possible.
Please consider a donation to keep the madness going.

Tiffany and Hannah here you go, you both had bad HOH reigns this past week and today.
Claire had a tiffany final 2; Alyssa had a Hannah final 2. There is a reason why you dont get rid of finals 2’s?? For the likes of men that are just going to take you out next! Hannah and Tiffany they gave up their games to the men in the cookout; hope it was worth it ladies. Why you don’t make decision in big brother because of race….. Already at 6 Tiffany and Hannah are in big trouble now!

I hope u not believing that. These people make changes every week so nothing is ever truly guaranteed in the house.

I do think Claire would’ve been true to tiff until finally 2. Not believing Alyssa and Hannah’s final 2 though.

Same thing with all alliances. Hannah and Tiffany made decisions because of their alliance and only two can be final 2 with one winner, regardless of who goes now or later their goal of getting to final 6 is met. Now they are going to do what is best for their individual game. If there was a non-CO in the house, he or she would be on the block by Ky. So Tiffany and Hannah can get on the block, it is the game and they all know it well. Best alliance so far.

Not the best alliance In my opinion. The alliance was based on race, which is their right, but they really don’t even like each other. I would want a final 2 with someone I think deserved it and I could trust to take me. Azah and Derek were carried through this game, didntvwin nothing and didn’t have to, which is a horrible game to me. It was predictable throughout, which is boring. But like I said my opinion.

All true. It is upsetting that their criteria was based on race. However, I can’t help but be impressed by their devotion to their mission. I don’the think any other alliance of 6 formed on the 1st day and kept all the members together. Their mission bound them tight.
Signed, old, conservative white woman.

No Way around it, they screwed themselves. could have gotten out x and Kyland would have made it much much more likely to win the game. Oh well who needs $750,000? Give it to a man. Way to go girls. Thank you

Sorry Simon & Dawg. This will be a long week.

Ky is going to go in circles this week, lol Hahaha… I am waiting to watch the fun and fireworks.

Leave Them Behind Joe
Reply to  Dx_fan

I’m hoping Chaddha and Tiffany can pull it out. 🙁 Why is everyone after them? I guess Azah and Big D know that Kyland and X might pull them along because they’d be easy to beat.. But isn’t the point to win, so don’t you want to get Kyland and X out? Come on… I admit it isn’t smart for Kyland to take a shot at X, but I wish he didn’t know that.

I bet if Tiffany or Chaddha come down, Kyland would put up Big D or Azah.. and they’d never vote against each other… It’s like Tiffany and Chaddha’s fate is already sealed…….

DJ in FLA
Reply to  Jess

Tiffany and Chaddha are my favorites however, they had a chance to take out a guy but knew they were the only ones willing to do the deed. Those misogynists are gonna take all 3 girls out and fight over who gets lazy boy.

If tiff goes , i believe ky would be everyone , even the guys 1# target .

Yikes. See you next week.

Leave Them Behind Joe

I hope Tiff gets bounced.

Kyland needs to get out Hannah or Azah.

I could root for a female final 2 but the girls were all stupid, they had the numbers early on, but focused more on POC final 6. Now I hope the girls go first. At this point I don’t care who wins, this racial angle BB has had ruined it for me.

I totally agree with you. Everyone knew from day one there weren’t going to be any other race in finals

Hey and why the money this time? Because CBS wanted it to be about race instead who play’s the best game. CBS took it to a whole other level.

Why don’t they just split the prize into 6. And call it a wrap. See you next year.