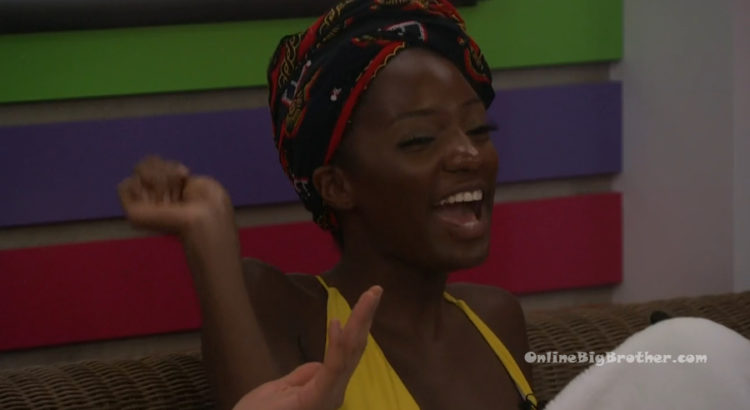 Big Brother Spoilers – Kyland will likely not use the veto. Nominations will stand. As of right now Tiffany will be evicted but a lot can happen. 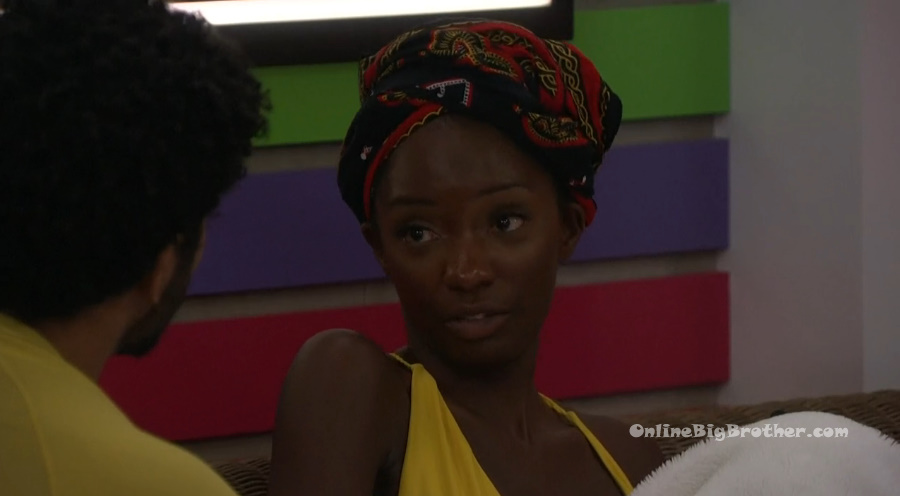 10pm – 10:44pm HOH room. Azah and Kyland.
Ky – so you do want to go up or you don’t want to go up? Azah – Ummm.. do you need me to? Ky – I don’t. I don’t believe I do. Azah – ummm.. okay!? Ky – so I am considering things and that comes from in all honestly its weird because .. this week has kind of been the most vulnerable we’ve all been and .. its like next week is like the most most most vulnerable that ahhhh.. that I … would ..that I have been for sure. I don’t know about would. That at least have ever been. And because its like moving into a week where I can’t play and I just put two people up at least two people… but I am trying to figure out with the noms as they are do you have a preference who you would want to stay or leave. Azah – I know what I told you when you won. For me I would prefer to honor the intended target that you have. Putting aside whatever personal preference or thoughts that I have. Both of them that are up there.. they are like sisters to me. I am fine going with wherever you would like to go. If you still aren’t sure and want some additional opinions then I can give you that. Ky – I would like to hear your preferences. Azah – I’ll start with Tiffany .. from your noms it was more who you feel like you can work with moving forward? Ky – no, I said I don’t know who I can work with moving forward. Ky starts rambling on and on… Azah – I, unfortunately, can’t .. I have to tell you that this is going to have to be a decision that you will have to make yourself. Azah explains their past issues and how she felt like Ky didn’t trust her. Ky – if Xavier went up in either of these places is there one preference you would have to vote either way? Azah – I am not sure. With Big D .. no matter who he is next to.. With Xavier I am going to go with what you want. Azah – Your toying with changing .. is it because your target has changed? Or you’re considering changing? Ky – I am trying to consider. Looking at next week and thinking of the options of.. not being able to play and thinking of who is more dangerous to keep in the house. Azah – do you still have a fourth person you are considering? Ky – I think I am trying to figure out .. I don’t know .. rather than be set on anything I am waiting for more information. Ky – what I can say to you and not to anyone ..not anyone objectively ..well maybe Derek but I just need to finish talking to a few more people but … welcome to final five! Azah – THANK YOU! YAY! I am so happy! They hug. Azah tells Ky about the girls alliance started week one called the king slayers. 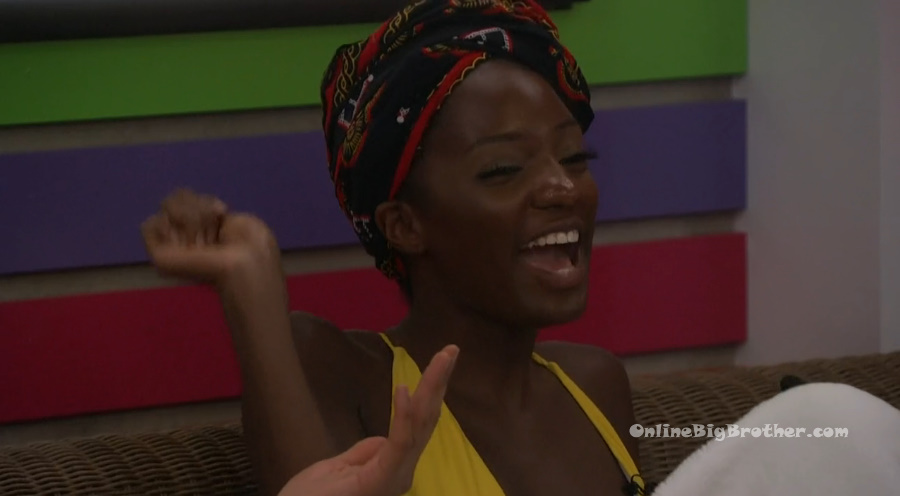 10:48pm – 11:14pm HOH room. Xavier and Kyland.
Ky – so I got to send you home I guess .. that’s the consensus. Nah just kidding. Ky goes into telling Xavier about his talk with Azah. Ky – I did feel comfortable to extend her getting through to next week. Xavier – I still don’t think she knows that we talk as much as we do. I don’t think anyone does. If Chaddha wins HOH, I don’t think she would touch either of us. Ky – I don’t think she would. Xavier – if she doesn’t touch either of us.. that following week.. especially with that following week being 4, I don’t think she would want either of us or potentially both of us in a position where we would both want to take her out. Ky – exactly. Yes. Xavier – I think she would put up Big D and Azah. Ky – I think Big D is the only one in the house that sees us working together. Xavier – I think the person that would be most upset about leaving would be Tiffany but because she had done what she did she is so understanding of it ..it is just kind of is what it is. That is the thing with me, if I have to take that shot at Chaddha… one I think my reasoning is valid and two I think I told her the other day you’re going to take a shot at me or I’m going to take a shot at you. It would just be straight up, I am not lying to you.. there is only so many of us left. From a competition standpoint and a jury standpoint you are arguably the biggest “threat” to me and that cheque. Ky – yeah in a different way.

11:20pm Xavier tells Hannah that she is up next to talk to Ky. Hannah – Uh.. Okay round two here we go! You kids give me a headache. You guys have aged me at least 5 years! 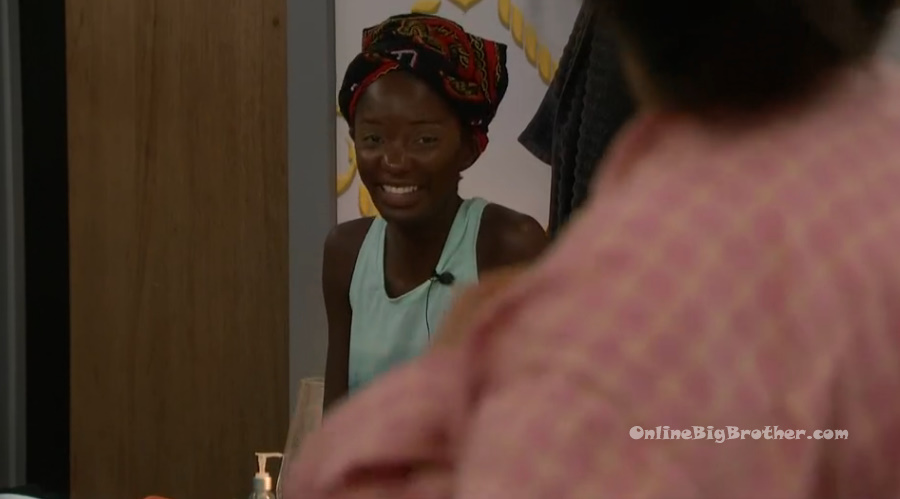 11:26pm – 11:55pm HOH room. Ky and Hannah.
Ky – so everyone wants you gone so I have to let them send you out. Hannah – I knew it! …is that good acting!? Ky – Unless something astounding happens… it seems like you’re in top five either way. Hannah – okay. So there is pretty much no scenario in which you me and Tiff could work together moving forward. Ky – there is no person that could go up that where I have had confidence in the votes to allow that to happen. Hannah – okay so either way one of us is going to go home. Ky – I would love to give you a welcome to the final five that you could feel good about but we will have to see what happens. Hannah – no don’t do that prematurely. Ky – one thing is that Tiffany definitely feels you distancing and based on how settled people are with their votes I don’t know that, that is necessary .. unless it is for personal reasons. If its for game reasons so that you’re not associated .. it doesn’t seem to be necessary. Hannah – for me that is not even game related ..well partially. From your speech you would like to see one person leave this week and so I would like to spend my time building my relationships with other people in the house. Ky – that makes sense. 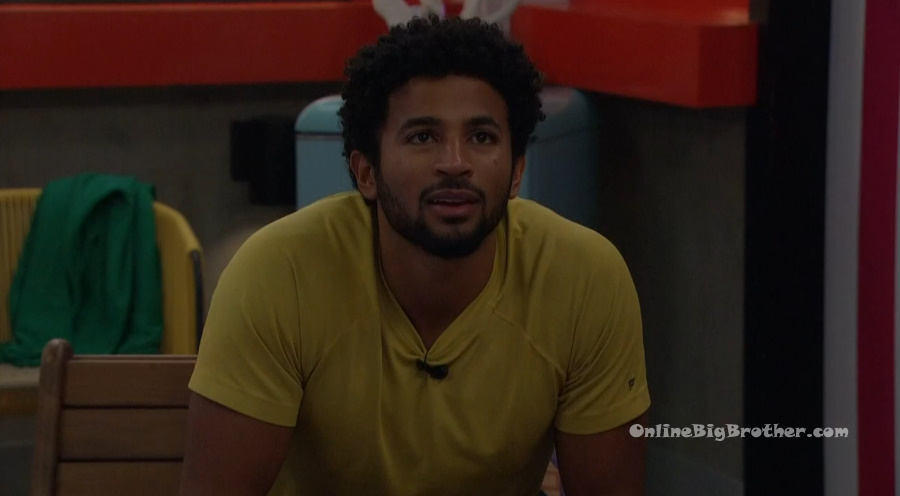 12:07am – 1am HOH room. Tiffany and Kyland.
Tiff – how do you feel? Ky – I mean its a heavy week no matter what. We are also so close to being done .. so it is just a very weird like.. Tiff – bitter sweet. Tiffany tells Ky about the conversations she had with the other house guests. They start talking about past events of the season. 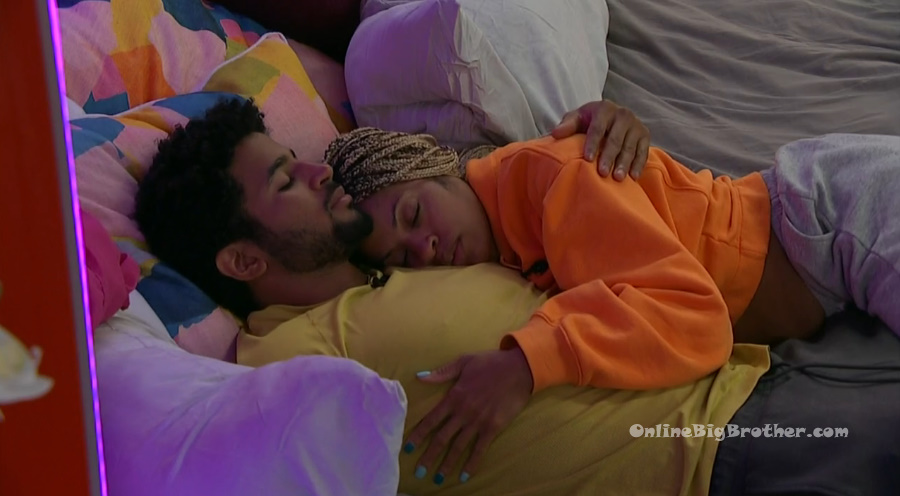 12:17am – 1am Living room. Azah and Big D.
Azah – based on if the nominations stay the same should we talk to X about a final four with Kyland or no? Big D – no. Because we don’t want to get ourselves.. because we’re already in the middle we don’t want to get ourselves more in the middle. Azah – okay, because Kyland is suspicious of you and X. Big D – I know. Xavier joins them. They start talking about movies and other random things. 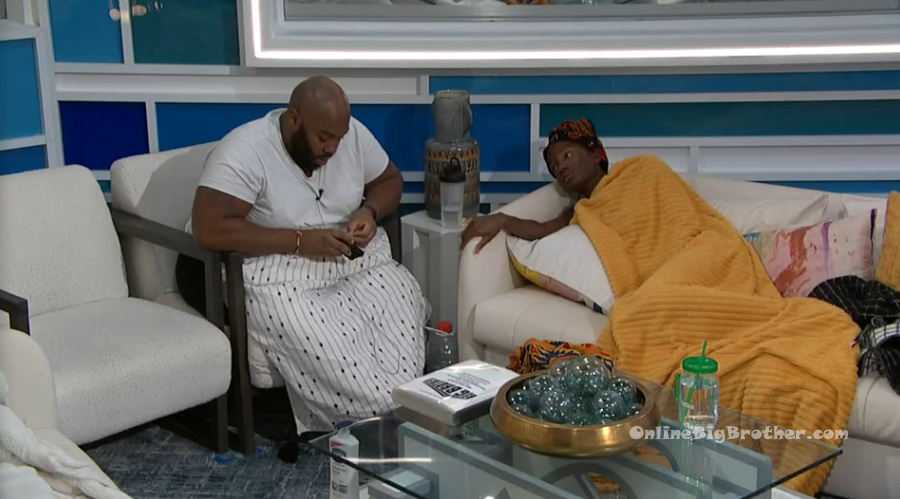 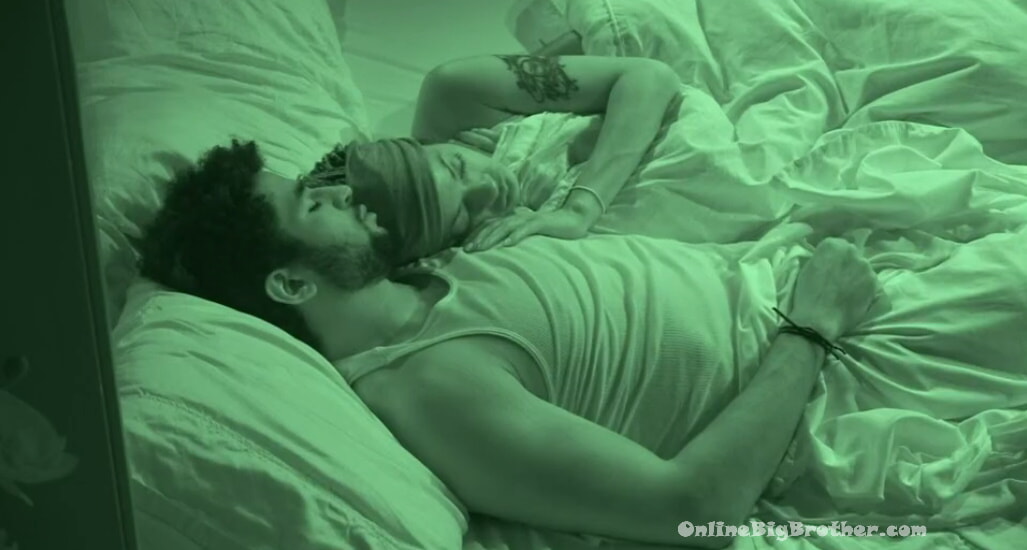 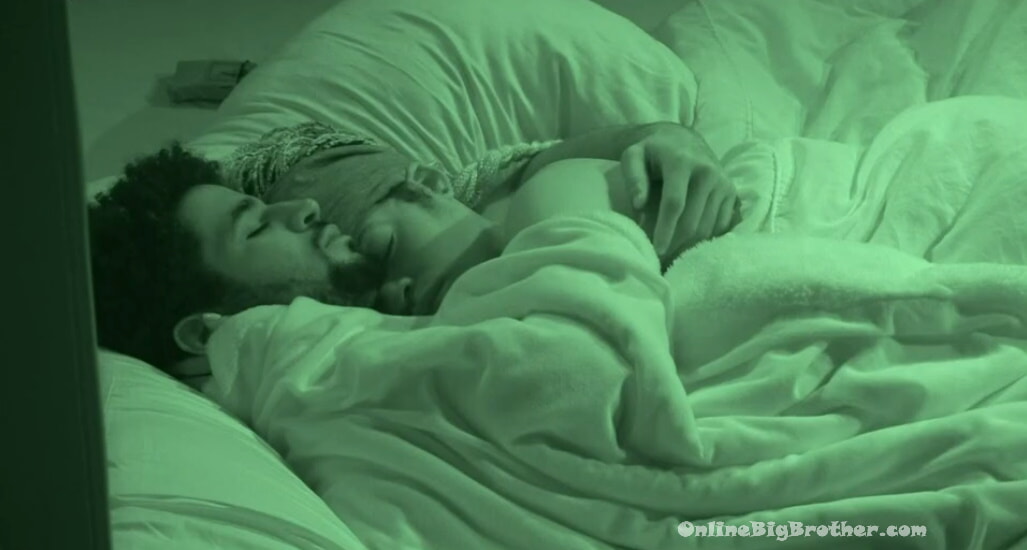 8:20 am House lights on downstairs but up in the HOH, it’s still cuddles. 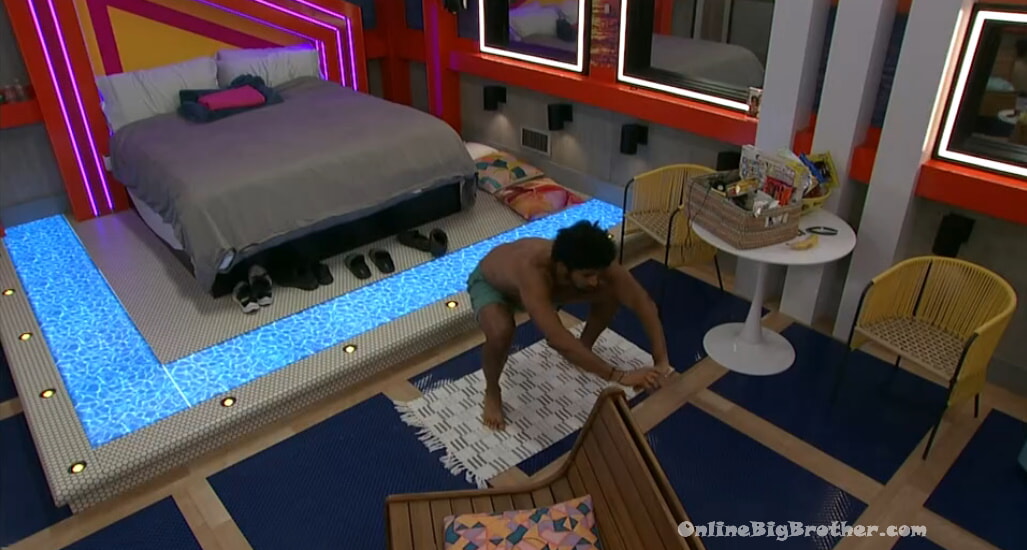 9:00 am Kyland doing some exercises to prep for not using the veto today.

If you’ve enjoyed our updates please consider a donation. Donations go directly to paying the considerable costs associated with running this site. Thank you to all those that have contributed ;)

orwell the out of work bbad owl

Tiffany did that for The Cookout. And now the Cookout turns on her? She has been the reason the Cookout made it to the final six. Now they get rid of her. Big D and Azah have literally done nothing and they make it this far? If either of them make it to final 2, I hope they win. That’s what happens when you drag floaters to the end! Remember Josh?

Tiffany has been playing 6th place game for months so she shouldn’t be surprised. That’s why you don’t go to the end with an alliance you’re at the bottom of

Here for the crowd
Reply to  Just a thought

Sorry but if she wanted to do something for the Cookout, she shouldn’t have won the HOH in the first place. She won it for selfish reasons, so now she pays for what she has done.

BBLM
Reply to  Just a thought

Definitely referring to Tiffany initially trying to keep Clair when every other CO member got rid of their “partner”… Resulting in the CO loosing trust in her. Tiffany is her own worst enemy.

Although lying is part of the game, Tiffany has been over thebtop with her game play. She is arrogant and selfish.
Arrivaderci Tiffany and now you can enjoy spending time with Claire.
You also know she will be a bitter juror as well.

San_Diego_Gal
Reply to  orwell the out of work bbad owl

Tiffany put the CO mission ahead of her personal game. She will go home knowing that she got the CO to F6. But she’ll go home without $750k. In fact, she’ll go home with LESS money than SB, the person she fixated on evicting for weeks. They’ll each get the $1k weekly stipend, but SB will also get the extra $5k from the prize comp.

The irony is that X, Ky & DF are droning on and on about Tiffany being “selfish,” when she could have cut any of them at F8. She kept them because she put the CO ahead of her own game. None of them would have done the same for her. Well, DF certainly wouldn’t have done it because he never would have won an actual comp to be HOH.

This is dead on.

I have a really bad taste in my mouth.

It’s DX at the top and DF/Azah at the bottom of the ranking grid for me.

DF is gonna be so pressed when he learns that DX is the most popular HG this season.

I really can’t believe that everyone expected Tiffany to throw the HOA, so was Kyland but he was hanging on as well! Azah should have lasted longer if she expected to be thrown the HOA, at least make an effort. That’s how people get sent home is throwing an HOA. There are 3 arrogant and entitled people in that house and they are the guys. It’s really unbelievable.

Would love to see tiffany walk out that door Thursday night

I did not get into this Season, it has been a boring one.