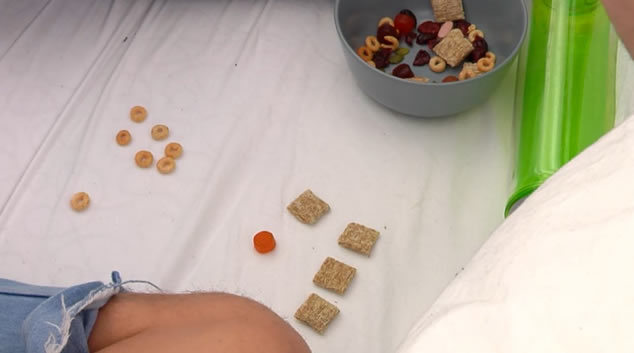 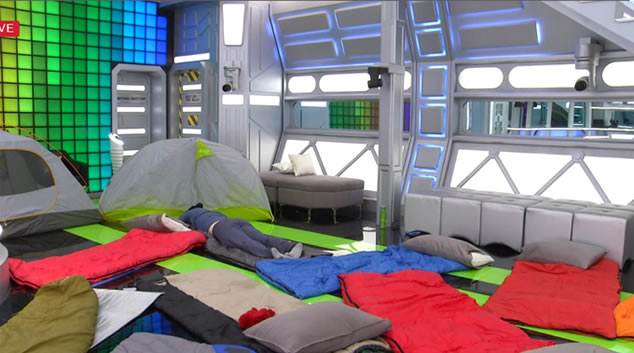 Everyone including William have to sleep in on the floor tonight.
Ika is giving them a rundown from a talk she had with William. Says he’s worried that Bruno would put him up, is pissed that people talk to Dre wants them to talk to him directly.
Ika says the best thing for them is any 2 of Emily, Dillon and Jackie. Ika stresses to say that Emily is the glue that holds those 3 together. If they keep Dillon off the block he might win the POV and take Emily down.

8:00pm HOH Demetres Dre William HOH
Demetres says Emily is the glue that hold Dillon and Jackie together.
Demetres – the best way to get her out is to put Dillon up

Dre and William HOH
Dre says he needs to find out who Dillon and Emily are working with and who their targets are.

Kevin – you’re the beautiful Gummy that just won HOH
Kevin – The Cheerios are my side of the house
William – you’re 7
Kevin – You guys 5. Ika, Demetres, Dre and karen.

Kevin says he wants to prevent any of the Cheerios from targeting William. Kevin says he really wants to be William’s Ally. He claims he doesn’t have a relationship with Ika, Demetres, Dre and Karen.
Kevin says he has to go after Karen if he wins
Kevin – I’m working with Bruno he’s my friend.. I know if he won we would both keep you Safe.

Kevin – I am not playing you I really like you on a personal level.. we’re on both sides of the house
Kevin says William can keep him safe with Dre and Kevin will keep William safe with Bruno

8:22pm HOH Bruno and William
William – if you were HOH what would you do
Bruno – that’s a good question.. Jackie would be one for sure. I would have to put up Dillon or Emily but jackie would have been my target.
Bruno – I’m not coming for you guys.
Bruno says he would love to play this game with William because he knows William is a loyal person.
William says he would love to work with Bruno.

8:45pm Jackie and William HOH
William says he’s mixed up with everything.
Jackie – you know where your heads at
William – not yet..
Jackie – Dre is not even in my tunnel vision I just one person out (Ika)
Jackie says she’s not coming after William.

Jackie says Bruno is very good with his words.
William – do you think Bruno would go after me and Dre
Jackie – when I’m venting to him I’m saying I want to go after Ika..
Adds that Bruno follows along with that.
Jackie says William is the closest person she feels that she has in the house
JAckie says she’s starting to get close to EMily because she genuinely cares for Jackie because she sees what is going on with Ika.

Jackie says if she wins HOH she would put Ika up next to Demetres to ensure Ika goes home. If POV was played she would put Karen up.
Jackie says when it comes to game talk she feels the most comfortable with Emily.

9:20pm Ika and William.
Ika – I don’t trust anybody but you Dre and Demetres, everybody else are f***rs
William says Kevin and Jackie are saying it was Sindy that voted for him.
Ika thought it was Jackie.
Ika asks him who was he thinking of putting up right after he won HOH.
William – Dillon and EMily
William says everyone is telling him Dillon and EMily are not coming after him now they are all saying for him to put up Jackie.

William says he doesn’t see himself working with Jackie, Emily or Dillon.
Ika says nobody likes Jackie so if they see him with her they will put him on the block with her.

William thinks at this point he might put up Dillon and Emily
William – I still don’t know if I can trust Bruno and Kevin
William adds that at this point he can trust them more that Jackie, Bruno and Kevin.
Dre joins them. They mention that Kevin is saying Sindy voted for William. Dre says that Kevin is working with Jackie, “He’s playing both sides”
Dre says she doesn’t trust Kevin, Bruno Jackie and Emily

9:42pm Ika Demetres William Dre
Ika is telling them to not go after both side of the house don’t split up the noms. Dre and Ika disagree on this. Dre leaves abruptly

9:50pm Ika and Demetres
They’re pissed at Kevin for saying Sindy voted for William.
Demetres – Kevin is a f****g loser
Demetres – so he’s taking the heat off Bruno by throwing Kevin under the bus
Ika says that William is saying that he doesn’t trust Kevin because all he does is talks in circles.
Demetres says they should get Kevin and Bruno up and they’ll vote out Kevin.. “No that’s stupid”
Ika – I f***G hate Kevin
Ika says if Jackie puts her and Demetres on the block she’ll snatch every single red hair from her head.
Ika says they need to talk to Bruno so he knows what Kevin is doing.
Ika is pissed at Dre.
Ika – she’s stupid she’s being dumb f*** off
Ika – Kevin is a piece of shit and he needs to leave this fucking house

Iak and Demetres suspect that Kevin was the one that voted for Dre so he could pin it on Sindy.
Ika repeats that Kevin is a piece of shit

9:55pm HOH Dre and William (they speak a lot of french in here)
Dre is annoyed that people are lying to William.
Dre keeps saying Kevin is not giving him any information.
William – everyone is saying they are targeting Jackie.
Dre is pushing for Bruno or Kevin to go up.

Dre doesn’t believe that Emily is the glue between Jackie and Dillon, calls it bullshit. She doesn’t think Dillon trusts Jackie and he won’t work with her.
William says he wouldn’t mind seeing Bruno going but going after him he might get himself in trouble.

Ika telling them that Kevin is telling William that Sindy was the one that voted for William and Dre. She adds that Kevin wasn’t pushing for Dillon and Emily to go up all William is saying is he talked in circles.
Sindy admits to be the one that nominated Dre and William. they tell Sindy to say she voted for Dre and Jackie.

C’mon William time to put your big boy pants on and nominate Bruno with Dillon or Emily this Week. Stop being so gullible or you will be gone next Week in the Double. Personally I would love it if Bruno went home this Week followed by Kevin and Neda in the Double.

I like Ika but she’s the one on a power trip, not Dre. Dre is rightly looking out for her & the hoh’s best interest. Ika is looking out for her own best interest. Pushing Em & Dil is sketchy as hell bc for weeks now, ika has been telling everyone within earshot that theyre coming for her so why wouldn’t Dre get upset if during William’s reign, in comes Ika pushing for them? Especially when Ika knows that the 6 are targeting Dre? Dre has great instincts & that bothers Ika this week bc her 6 alliance arent protecting her so she wants FC to. Ika needs to win hoh & go after her targets, until then, sit back, do ur makeup, flip ur hair, get to know Dem & watch everyone else squirm.

So, I’ve thought Ika was more amenable to working with the newbie ‘underdogs’ because they were more likely to follow her orders as queen, like good little peasants. Ika seems to need to lead, and has difficulty being part of a team. Now that Dre is trying to exert control on the hoh that doesn’t follow Ika’s plan… how is that going to work out?
It’s sort of funny to watch Dre and Ika compete for hohitis by proxy. William could probably just go for a walk or take a nap for the week, send Dre and Ika into the thunderdome, and let the winner have her say.

Dyl with an S

Neda lovers saying she’s getting a bad edit PA-LEASE. She used to be my fav player and now I can’t wait for her ass to get evicted next. I hope she leaves in the double that would be glorious and deserved.

William should just put Emily and Dillon on the block for the sake of them NEVER going to talk to him about his nominations.

I think Ika is a little shite head. Trying to make Kevin out to be lying about who voted for whom when he was clearly right about Sindys vote. “He’s just saying this because blah blah” I liked the way Ika was playing but now with all her “I hate this person” jeez man get over youself. How many people can you possibly hate? I hope William isn’t an idiot here. Maybe Dre should win something and she then can make her own decisions. Cant stand her and they should have gotten rid of her.

“I ain’t falling for no banana in my tail pipe”

little shite head. Trying to make Kevin out to be lying about who voted for whom when he was clearly right about Sindys vote. “He’s just saying this because blah blah” I liked the way Ika was playing but now with all her “I hate this person” jeez man get over youself. How many people can you possibly hate? I hope William isn’t an idiot here. Maybe Dre should win something and she then can make her own decisions. Cant stand her and they should have gotten rid of her.

“I ain’t falling for no banana in my tail pipe”