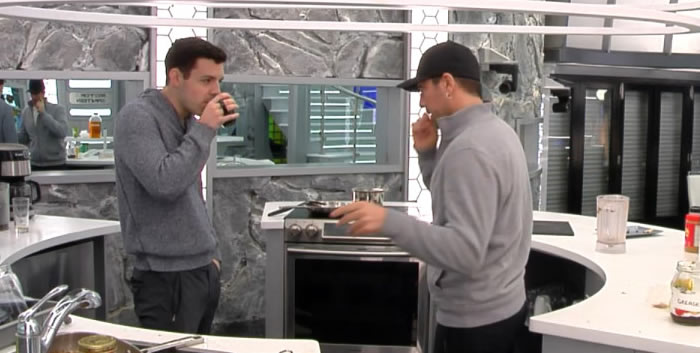 8:46pm Kevin and Bruno
Bruno and Kevin don’t buy Ika and Demetres saying they voted with the other side on purpose.
Bruno – they got caught..
Kevin – if they would just admit they were playing both side I would respect that more
Kevin mentions how dangerous their showmance might be
Bruno – they’re definitely together
Kevin – we’re super luck 4 weeks in no nominations, we haven’t had to win a HOH either.. I didn’t expect that
Bruno – I know.. It’s HUGE
Bruno mentions his conversation with Gary last night.
Bruno – he believes I was his final 2
Bruno says that Gary asked him “Help me get the numbers’
Kevin – No gary
Bruno – ya
Bruno – he’s gotta go.. He’s gotta go.. He was blaming Dre for the flip
Kevin – it was more him..

9:00pm Neda and Sindy
Neda says that Ika’s people are the other side.
Neda – he literally haven’t done anything.. It sucks it really sucks.. she was like you’re my number one you’re my number one.. no you’re not..
(Ika had some words for Neda last night because Ika didn’t nominate the same people as Neda’s side)

10:00pm Dre, Ika and Demetres
talking about Jackie and Sindy being “Up Neda’s A$$hole”
Dre – If Neda poops Sindy will be the first one to fall (HAHAHAHA)
Dre says Jackie is further up, “She’s in deep”

I believe the POV is being played this morning.
Power of Veto Players Dre, Gary, Kevin, William, Neda and Emily

Over dre and her whining, i rather watch Gary do his makeup at least he’s entertaining sometimes.

And it looks like Ika will follow her previous season and get evicted on week 4! As soon as Dre or Gary will veto, the house will nominate Ika and evict her!

Which is sooooo annoying because I like Ika, I just wish that she flipped and saved Cass because then this reverse week would be completely different! I don’t want to see Nedas side of the house just dominate, don’t get me wrong I like Neda and Kevin, but the other people they are working with are so annoying!!!

I don’t think she will be eliminated this week. Week 5? Maybe, depending on HOH. I would love to see Ika get out of this situation but she definitely got her work cut out for her.

Ya Ika is playing a pretty stupid game right now. She should have saved Cass and voted this week against Neda’s group or kept riding with Neda’s group. Now she just blew up her game. And how did the others even find out who she voted for? Was this not kept a secret?

guys I can’t wait for the jury twist where Neda gets evicted, but she gets voted back in cause cancer feels good sometimes, I guess.

I was a huge Neda fan in her first season and thought she played one of the best BB games ever. This year I am struggling to say a fan…. I have tried to stay a fan and I have wanted to but I just can’t. She plays with such negativity and it is hard to watch.

Neda is nasty. Who knew? Didn’t like it when she threw out food on her first season, but she wasn’t as nasty as she is now. The perks of privelege I guess.

we should just call it the NedaShow this is the worst season ever BBCAN I waited for this….. please do better next season :(