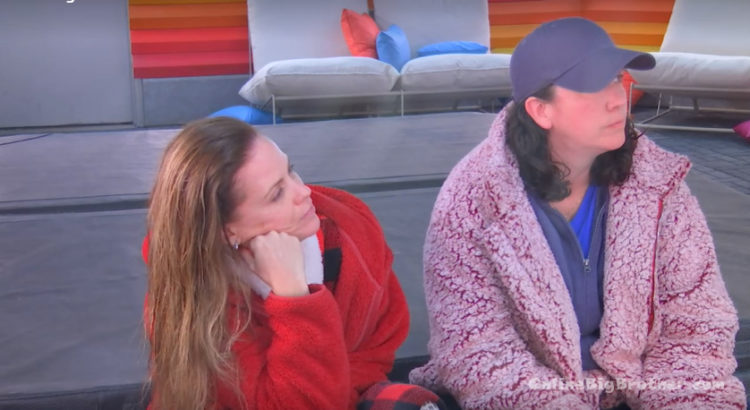 Big Brother Spoilers – Feeds were down for most of the morning. They had a special activity “skip the slop” Breydon won. 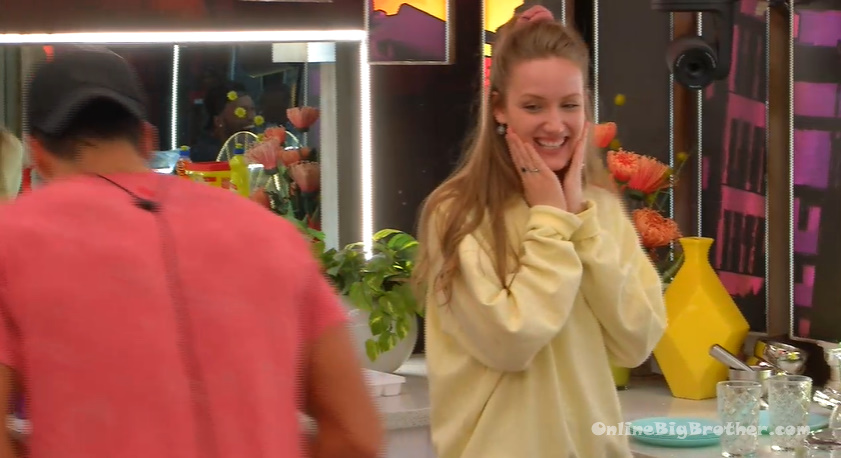 12am The live feeds return from being blocked. Most of the house guests are sitting around the kitchen table. Tychon, Jedson and Beth are cleaning. Latoya is doing dishes. Talk turns to talking about Beth kissing Jedson and Tychon. Latoya – so who’s better Ty or Jed? Ty – well based on the first kiss, I got the higher rating. Jed – whoa whoa whoa!! You can’t even compare. Beth – they weren’t bad ratings. Jed – If I kissed you one on one in a normal setting it would be a 10… a 9 or a 10. Ty – I agree! My retainer was in my mouth. Beth – was it in every time? Ty – one time it wasn’t. Latoya – if you were local would you.. Beth looks at Ty – I would try to pursue and Jed! 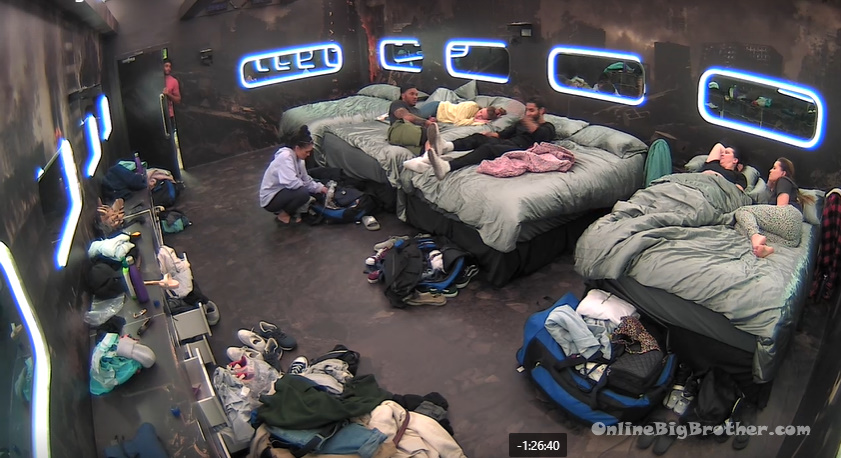 Hot Tub room. Tina, Tera and Kiefer.
Tera – oh they’re going to be so mad! Keifer – I don’t give a f**k! Tina – that’s when we are going to need from you to deflect away from me and Tera. Keifer – oh 100%! 100% Tina – because they’re going to be pissed!! Keifer – I would leave them if they put you guys up. It would be so f**king stupid! Lets be honest, the chances are a little bit lower than some of the studs.. you know what I mean?! Tina – yup. I want an average person to win this season. Keifer – oh yeah .. like a paris. Like they need to go after each other. Keifer – it just comes down to that final Comp. Tera – we just have to know our sh*t. We have to study. Keifer – I’ve got it all! Tera – and that is why I am so surprised that they think you’re weak. I’m like are you nuts!? Keifer – they keep telling me that they’re just saying that. Tina – it doesn’t matter. Keifer – I know. I just can’t wait until they watch it .. oh sh*t! Keifer was f**king out here. Part of me did think I was going to go home but part of me wanted to play it up even more to them. Tera – absolutely! Keifer – To give them a false sense of security. I was like I know you guys are going to keep LT .. I am going to leave here with my head held high. Like I played an honest proud game. Like I am even going to sauce it up in my speech I have to do on Thursday. It will be a good one! Tera – the more shocked you appear .. the better it is to you. Keifer – and I gave my pitch .. I am not going to talk game to anyone else but you two. Because it is starting to get to me that they’re talking about next week without me. Tina – its bullshit. It really is. Keifer – they’re going to be pissed because they think that Kyle is orchestrating the whole thing. Tine – and you need to let them continue to think that. Tina – we just have to navigate to where we’re sneaking through the cracks. Tina – and those guys haven’t approached me with any game talk in the last few days. Keifer – I know, they haven’t approached anyone. They’re just assuming. 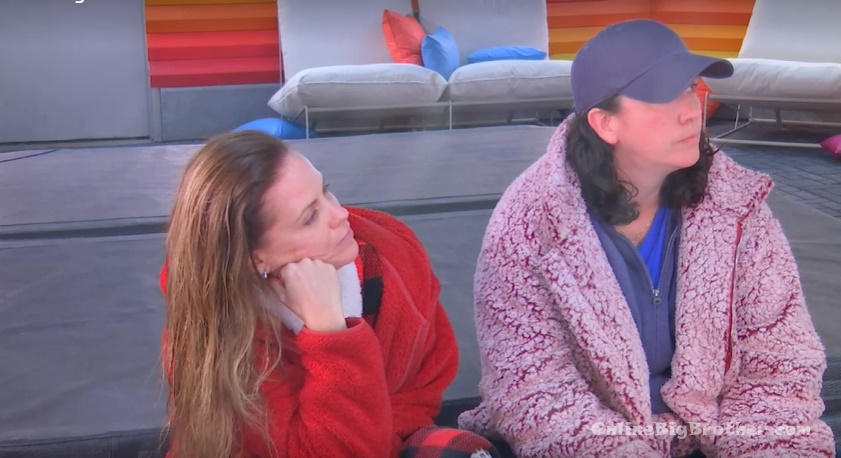 What we learned last night:

So what we learned is though Tina is shitting not bricks but entire houses at the prospect of the sunsetters targeting her for betrayal… she’s still gaming. The oddballs all now know Kiefer has been in on the plan, so his eeyore manipulation has been fake. Next time he’s depressed do they wonder who told him to play roadkill? Latoya’s answer was an effort to parrot Austin in a sense, so that she could go through with her stated plan for next week to bond with Austin.
BTW, dance session last night. Beth asks Kyle why her head keeps going directly to his balls. Do you have ANY idea the amount of smoke that was coming out my head when the clapback response overload circuit in my brain tripped? At least 15 sarcastic jibes simultaneously in my head.

I actually feel like I’m back at day one where I really don’t like anyone. Those I did like are making the stupidest moves, and those i didn’t like are annoying me even more. With Toya going home, everything is now so predictable. Good thing i didn’t bother overstocking the popcorn !

Beth thinks anyone not spilling their entire game to her is not playing the game or coming after her……well, no one trusts you girl!! Latoya, Beth, Jed & Ty have been so single minded OBSESSED with Kyle ever since Beth tried flirting with him week one and he wasn’t interested. He told Ro he could see she was a huge attention ho and that turned him off. Beth ran to Latoya and told her Kyle was targeting the women (he wasn’t). From that moment on Latoya has hated Kyle for merely breathing. She convinced herself he was her and the Sunsetters #1 target over things he never said or did. She’s going to walk out to meet Arisa and blame Kyle for masterminding a flip against her even though she was Victoria’s target all along. For a cop, her read on house has been pretty poor.