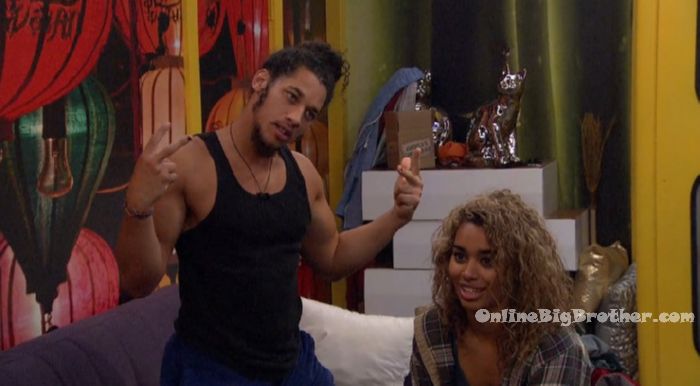 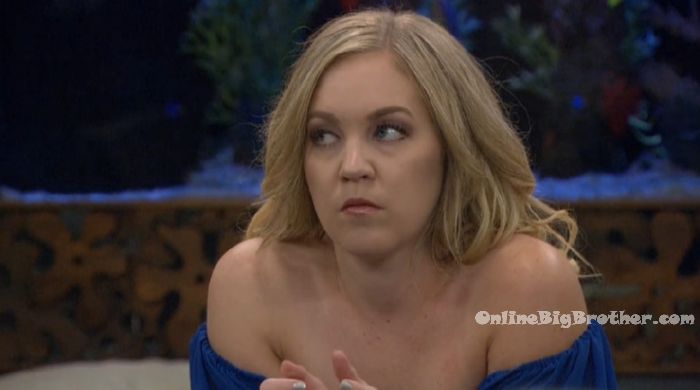 8:40pm HOH room – Shelby, Alex and Morgan. Shelby – I can’t wait for Morgan and I to release our inner b***hes together but with this double eviction .. we could go home right after. Alex – I really wish it was not. I wish double eviction was next week and not this week. Alex – coming in here I said I wanted to be close with the nerdy people. You (Shelby) are a bit nerdy and Scott was nerdy. Alex points at Danielle and says this was the type of person I described I did not want to be inside the house with. And here she is .. right here. I still think I would be friends with Whitney but not right now in here. I kind of know what I want to say in my speech. As I’m walking to the door I want to turn around and say something as I’m going. And I want to yell something calling out Jason. I might just honestly say something about him being the puppet master of his side of the house and running his entire alliance. Just something to make them think. He is literally the brains behind the operation.. their side. 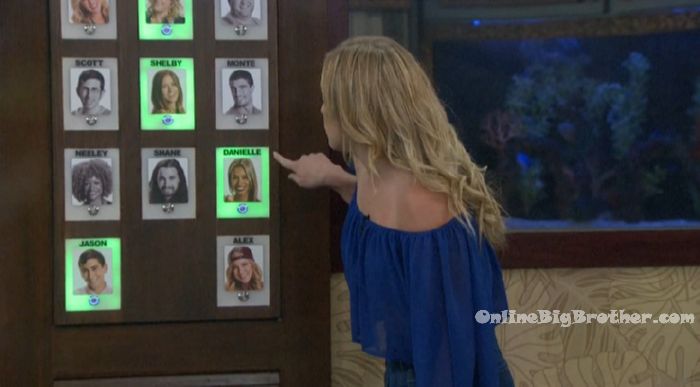 Alex – Dear hypocrit-idiots and yes Whitney this now includes you. I cannot sand any of you. And then as I’m being evicted whether its first or second. If its second I will say the sister thing. I would turn around an say Jason congrats on being the puppet master on your side of the house. And as I go out I’ll scream by the way Morgan and I are sisters! This is assuming I go second.

Shelby – you could say it in your speech like Alex and I are sisters. Morgan – If I am second to go I am just going to do the sister thing. If I’m first to go I don’t know. Shelby – you could be like Alex and I were sisters and we both could have been working both alliances but you all were so unbearable that we had to be on the same side of the house. And then when you leaves you could be like All you bikini girls…. And then everyone would be so dumb founded. 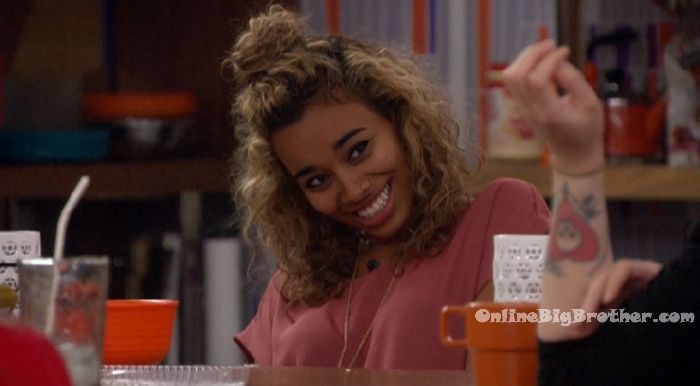 Morgan’s speech – tomorrow I’m going to give my speech to everyone. I would say in my speech I’m not going to campaign for your votes to stay but I have a few things for everyone that I’ve wanted to say. Kryssie I’m so proud of you for not quitting the game. I know you’ve only threatened a couple times, good job. Danielle I’m really happy you finally realized there are other people in this house besides just yourself. Justin – maybe you should stop throwing competitions so that you can stop riding Jason’s coattails. Jason – the real twist of this game if if the truth camDanielle – I’m going to have a nice celefrares 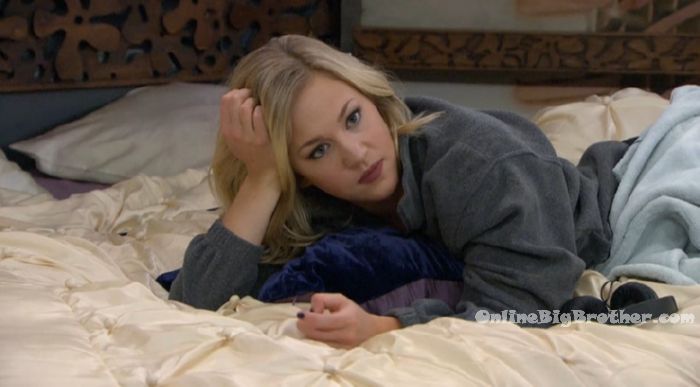 11pm Bedroom – Jason, Justin, Kryssie, Whitney and Danielle are hanging out and joking around. They talk about how Alex hasn’t said anything to them. Kryssie – Alex has been stomping around ever since she became aware she was going home. Jason – she should be trying to work. Danielle – really! I don’t understand. Jason – I thought she would have got to work and I wouldn’t have even told you guys no. I would have done whatever you guys want. But she clearly isn’t as good a player as I thought she was because she ain’t working. Danielle – I would have been going to everyone being like listen. Jason – she should have been on it and been like can I have my 3 voters with me. F**k my other friends. Justin – I would have respected that. I would have been more than happy to send f**king Morgan out of here. Jason – you don’t have Scott to make deals for you anymore. If you want to save yourself you have to pull up your big girl pants and do it yourself. You can’t stomp around. But clearly she can’t do that. Danielle – if you’re not going to save yourself, who’s going to do it. Jason – if these b***hes don’t know what to do and don’t have anyone to show them the way. That’s why they’re on the webisode version. Danielle – hey, we’re all on the webisode version.

12:35pm – 1:40am Danielle, Jason, Justin, Kryssie and Whitney. WHitney – Justin sing us a patriotic song. Jason – sing us one where our country isn’t going to be a hot mess when we get out of here. Justin – I’m not feeling very hopeful. I think its really going to be f**king hell. Jason – lets just hope Donald Trump didn’t win and then it would be a little less hell. Clinton will probably be a little less hell. Justin – she’s going to suck but she is going to suck a little less than he is. Danielle – it will suck either way. 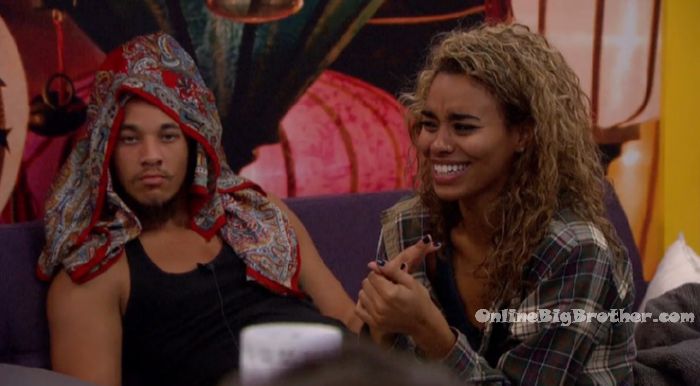 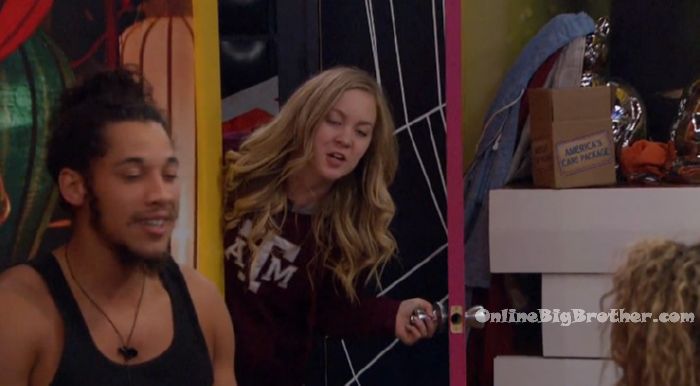 2:45am All the house guests are sleeping..

Welcome to TRUMPLAND! The deplorable voters have spoken

That anyone thinks voters have a real say… would you like scrambled eggs and cheese or a cheese omelette?
The 99% get their choice between multi multi millionaires or for a change of pace billionaires
System sucks and needs to be changed we need to stop thinking the rich politicians are ever going to help the 99%
And now back to BB one of the many distractions that they create so we don’t figure out how to create change

Sound the TRUMPets
Reply to  Anonymous

There’s a man goin’ ’round takin’ names.
An’ he decides who to free and who to blame.
Everybody won’t be treated all the same.
There’ll be a golden ladder reaching down.
When the man comes around.

Hear the TRUMPets, hear the pipers.
One hundred million angels singin’.
Multitudes are marching to the big kettle drum.
Voices callin’, voices cryin’.
Some are born an’ some are dyin’.
It’s Alpha’s and Omega’s Kingdom come.

And I heard a voice in the midst of the four beasts,
And I looked and behold: a pale horse.
And his name, that sat on him, was Death.
And Hell followed with him.

It really stinks that America had to choose between corruption or idiocy.

President Trump will be waiting for you all when you leave the house.

Well, If the LNC knew, Tuesday was not the perfect day for them after all. Jason and the crew are gonna be bummed.

Well i guess Trump winning was a blessing in disguise then… lol.

So the Girls choose to still play by the rules even though it is obvious one of them is going home and they get bashed for playing by the rules. Jason says they girls should be out groveling trying to save themselves. Why would they do that now when they already tried and the king of the liars already lied to them about forming a new alliance with himself, Dani and the 3 BS girls. They have no votes except for America so it is totally up to the 3 LNC members who goes. No point in trying to grovel anymore. Smh, again……

Goz…..I just wanted to say…..I’ve had a pleasure reading your comments this season:) We’re always on the same page with our thinking:) I hope you continue to come here for updates, especially when the real season starts. Speaking of….have you always followed OBB? I don’t remember seeing your name before this season…..or u changed your name?? Or I just don’t remember.. LOL!! Anyhow…..here’s to hoping Shelby and Morgan survive the double!! It would be sooooo sweet if Morgan won the double and Shelby wins the one right after. That would be amazing!! I think their only hope of surviving is to get Danielle to realize she’s on the bottom. Even Whitney said in the Backyard she’s only loyal to Justin, Jason, and Kryssie. If they can get Danielle they might be able to use her to take out Jason or Justin. I think Whitney would even vote out Jason. IDK. I just hope they make it. I really don’t wanna watch it with just the LNTrash left. Some would say it would be fun watching them turn on each other. I agree, however, I don’t think they will. I think Jason has them soooooo mind Fu*ked right now that they’re just willingly gonna bow out and let him have it. LOL. It’ll go like this. Danielle will win HOH and Kryssie will go. ok it’s my turn to go…….Jason will win HOH and it’s Danielle’s turn. LMAO!!!! so on and so forth:)

The buttkissing is strong with this one

Agree Goz posts are always on target!! Go Shelby & Morgan!!! Shelby has been my fav from the beginning…I can’t wait for the reactions of LNJ when they find out her lawyer secret and the sister secret!

When Jason and crew see Shelby, Morgan, and Alex on the top of Jokers list XD

When they see them at the top of the jokers list they will be happy they voted them out because they would have lost to them at the end. Good job LNJ!

Touche, my friend. I just remember Jason being relieved last year that he wasn’t loathes on his first season. I’d love to see his reaction once he leaves this time around…

It’s very fitting that the day hate reigned in America it also did in the BB house. LNJ has many similarities to Trump and his campaign. They are nasty, extremely hypocritical, and have no conscience. I could add more…

Those are the same words to describe yourself too.

Trump won with less votes than Al Gore lost with. Those people who did not vote should not complain.

One more reason to be glad that Trump won!! The LNJ are the real “basket of deplorables”.

Here’s to hoping Shelby and Morgan make it through the double eviction. I am hoping they send either Jason or Danielle out the door…

I’ve put my votes in to evict whitney!
Hopefully she gets the eviction vote and realises that her leaving the ballsmashers is not a smart choice and she won’t win america over with that.
She needs to go back and be number 3 of the ballsmashers otherwise she’s toast

It was already proven to be a smart choice, she’d be at home if she had remained “loyal”.

I think I would rather have $250,000 than be at the top of Jokers list….just me though. I think I could appease myself somehow with that.

Can we please save Morgan tonight if she doesn’t win HOH? I believe the CP vote is from 7-8 pacific time.

From what we’ve pieced together this is the schedule for tonight double eviction shit show.
** Pacific Times **
5pm Weekly recap Followed by the eviction, Whitney VS Morgan Vs Alex @ 6pm.
~ 6ish After the eviction they play the first HOH
7pm the care package voting is open
No America nominee or America vote
8pm The second eviction

Production just played Shelbys DR audio of her mentioning her LSATs over the loudspeakers for all the house guests to hear. Lol!