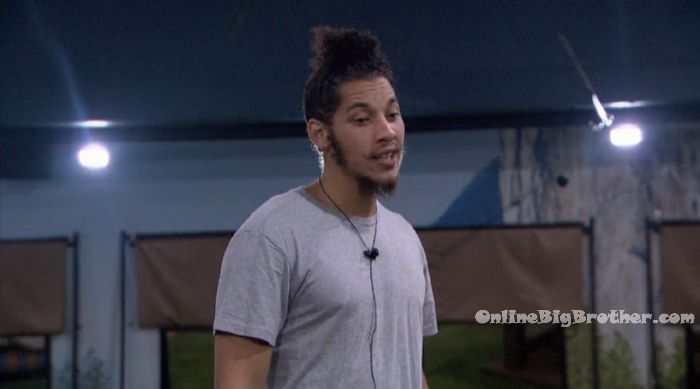 3:25am Backyard couch – Jason, Kryssie and Justin are chatting. Justin – I know Shane and your boy Monte .. I know they’re coming for me. I could really give no f**ks, I don’t care because come that veto. Him voting me in sh*t would probably be one of the worst decisions. Its so early in the game! Like I’m a monster! I’m a real savage when it comes down to this sh*t. I don’t care what it is I ain’t losing. Kryssie – and you don’t want to poke the sleeping bear first week. Justin – like dude you don’t want to wake up the sleeping giant. I see what’s going on. He got your girl coming down here to get towels and sh*t. Jason – the only person I don’t… I worried if Scott is going to break. The squeaky wheel gets the oil so just keep on him. Justin – I don’t think he would turn on me. At the end of the day .. if anything like this three right here.. straight. Shelby is really ditsy. When I was in the shower she was like I’m playing the game. The quicker I get his (Monte) a$$ out of here the better it is for me. I’m not even worried about Shane. I’m not even worried about him (Monte). I’m here to stay! I have a feeling Monte is coming for me. Jason – we just have to hope none of us are the initial nominee and then we need to get that veto because if it is used he is going to backdoor you. But he probably will not put you up initially. Justin – I don’t think he would put me up the first week. Kryssie – the people he first picks to be safe are going to be one of the people he backdoors. Jason – he ain’t going to take a real shot at you until after the veto. We just have to make sure we win it. If its not one of us three up there …we will have to leave them up there. 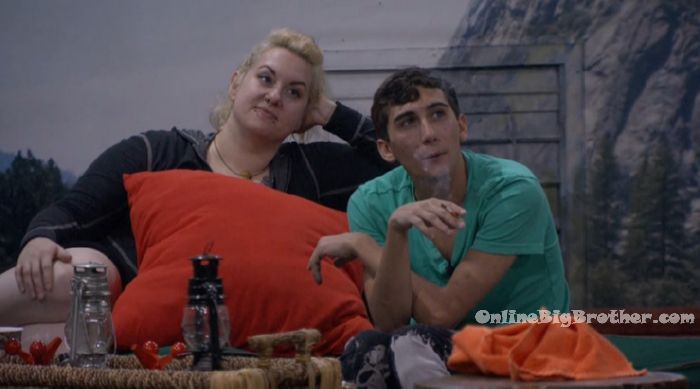 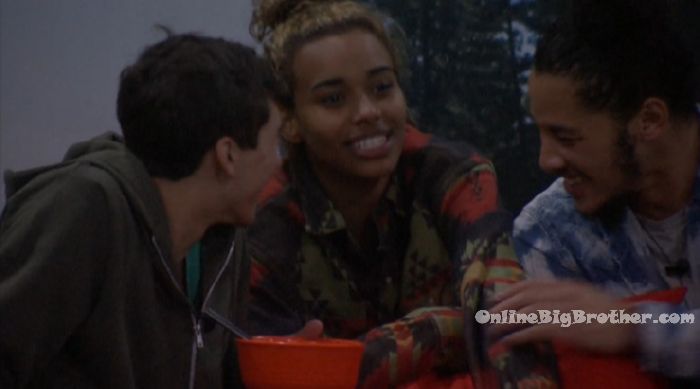 3:55am – 5:30am Justin, Jason, Kryssie are still talking. Danielle joins them. They laugh and joke around. Justin and Danielle head inside to go to bed. Jason – I’ll give you this one so that next week I can go out and bust as to win it to take you out. Kryssie – sorry personal trainer can’t stay.

Watch the 1st WEEK of the BBOTT Live Feeds for FREE!
Click here for your: 1 Week FREE Trial!

5:45am – 6:45am Kryssie – we have the most to lose being here.. you and I NEED to be final 2 because America wants to see people who deserve to win. If I have to lose the only person I am comfortable losing to is you. You know you’re going to play your d*^k off. You and Me and .. the jury is still out on Scott. I think we’re the only ones here to like DO THIS. Jason – Morgan is the head. Whitney is the tail and Alex is the middle. Whitney, she could actually be the head I don’t know. Kryssie – all she does is sit there and listen. You and I and Justin are the only personalities in here. Jason – here comes the sun .. we should get some sleep. They head inside. 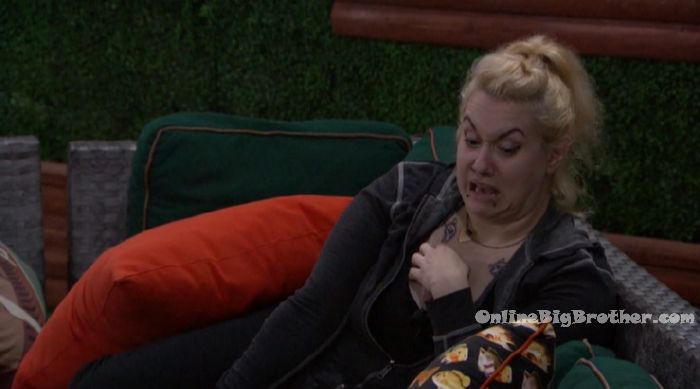 6:50am All the house guests are sleeping 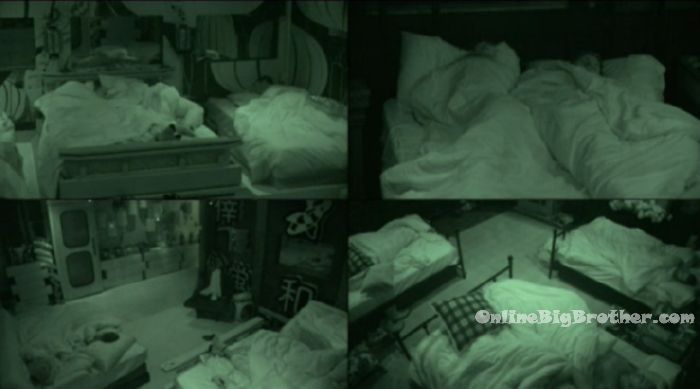 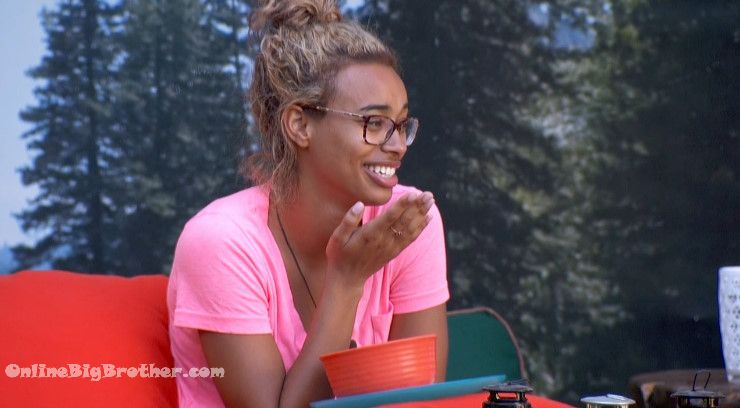 11:11am Danielle and Jason backyard
DAnielle says she was cuddly her feet with Shane and she fell asleep. Danielle says he had his hand on her leg. Danielle adds that she’s going to keep passively flirting with Shane just so he knows she’s still there but she wants him to have his space. 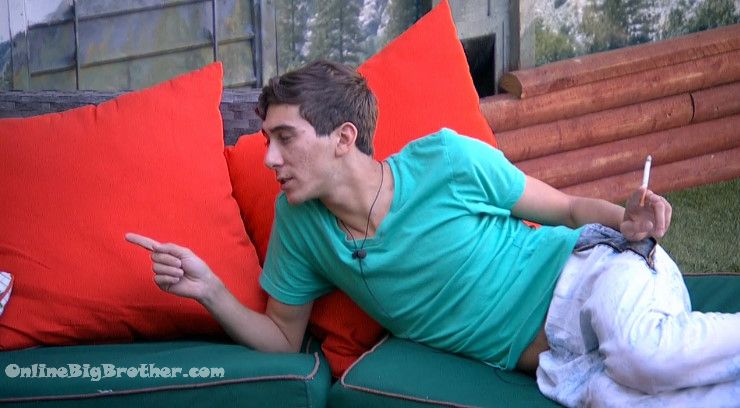 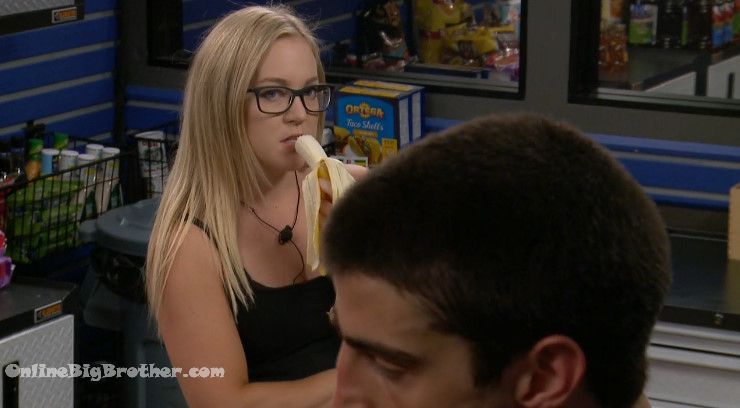 11:13am Storage room MOnte and Alex

talking about the nominations.
MOntes says he’s going to space it out, ‘Scott’s good..”
Monte – Neeley’s safe.. in my head.. her first to shock people I want to see how people react to being uneasy.. ”
Monte says taking Jason out this week benefits all of them because he’s played this game before.
Alex – leveling the playing field
Alex – who are you putting up next to him
Alex – i don’t know yet.. we all gotta be careful.. quiet.. 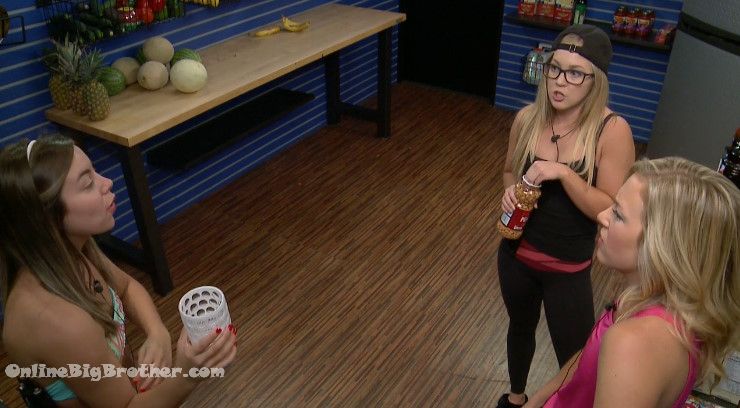 12:11pm Alex and Morgan storage room
They talked to Cornbread.. he told Alex he feels really good about Morgan. Morgan says Cornbread feels good about Alex.
Morgan says she’s not putting on a front with Cornbread.

Morgan – we need to figure out are we working in the same group.. the people we vibe with are the same
Alex – i’m totally dumbing down I’m a weird person.. the only weird one is scott.
MOrngan – I love Scott.
Alex – it’s a weird dynamic (the house in general)
Morgan – if we’re in the same group of people I don’t know if that’s the best idea.. i’m trying to stick with Shelby because Shelby can give us insight on….
Whitney walks in “What are you thinking today… ”

Alex – we’re good for this week.. I’m worried about next week, It’s almost like there’s too many of use getting along.. I feel nervous
MOrgan – we’re good for this week
Alex – if Shane wins HOH next week I feel nervous
Whitney – He’ll split up us girls
Alex says she doesn’t trust either Shane or Monte
Whitney says she really likes Kryssie
Alex and MOrgan agree but say Kryssie has been talking Mad game even though people say she doesn’t.

Morgan – we have a solid core..
Alex says at this point she doesn’t want to “Over Strategise” they need to play it cool but also set up for next week.
Whitney agrees says she’s “trying to stay calm right now” 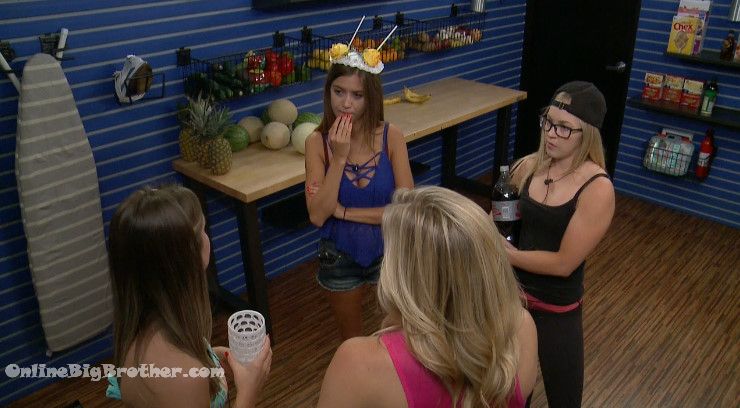 Shelby joins them with a new hat… She says she needs to talk to Monte “I’m not bonding with him”
Alex and MOrgan say they feel the same way about Shane
They agree Danielle and Shane are dangerous same with Shane and MOnte.
they girls complain about Danielle putting the “Good tampons” in the living room.. Shelbey says she doesn’t care took one anyways… (HUH?)

they warn MOnte has Scott in the palm of his hands right now.. 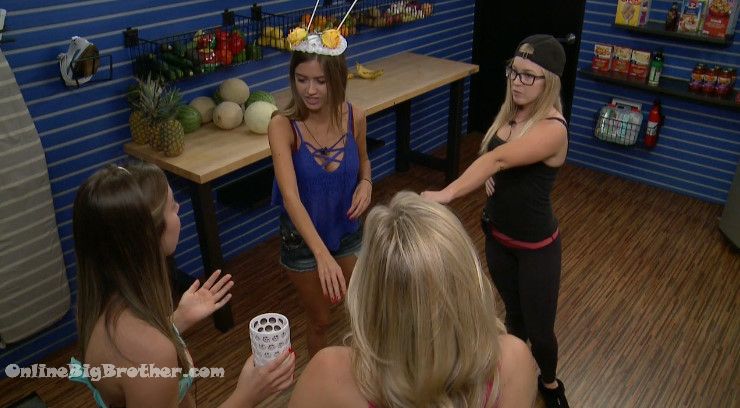 Shelbey says the girls have to stick together, Alex, Morgan and Whitney agree.
Shelbey says girl power puts her hand in the centre.
Shelby to Whitney – put your f****g hand in here… Girl power.. (OMG awesome)
Alex tells them to each get a “Partner” tells Shelby to go for MOnte.

Shelbey says she’s been trying to flirt with Monte but she’s not getting anywhere.

I am just getting started here. Did I hear that we get to vote who is evicted?

Pretty sure we only get an additional eviction vote. So like instead of like 5 people voting it would be 6 with us basically.

I love Justin! I hope he is in the house for a long time. He is giving us some of the best stuff I have seen on the feeds in a long long time.

It’s so refreshing to see players actually playing the game. Alex is playing a great game so far. Whoever did casting this year needs to do it for BB19.

Yet Another Hillary Lie
Reply to  Amy

Isn’t that the truth. We actually have players not lay low floaters.

Hi Simon. I have a US DNS, signed up with AMEX and created account. It all went though then a message came up verifying my location and then another message that it’s not available in my area at this time. I’m sure I’m on as a US region. Not sure what to do now. Did this happen to you?

You also need a VPN. Any VPN will do, PIA is the one I use and it works great.

I totally agree with you but please consider using punctuation, a comma, a period. I am not the punctuation police. I say this, not to be a dick, but to say that your post was hard to read.

Why should Jason get a care package? Is it only because he’s gay. The guy just smokes and talks $#!+. And his crap talking is not even funny.
Looks like another season of the commenters siding with the lazy, worthless novelty acts again.

I can’t even understand what you are attempting to say. Do you not speak English or something?

These girls are legit players. Have a very good feeling that they will stay united. Casting did great with the girls this season.

I don’t understand how anyone could like Justin, he admits to drug dealing and human traficking. he is the scum of the earth

Still love the new format. Production can’t edit these folks. Still don’t quite understand how America will play. Don’t like that it is only on AllAccess but, then it would be edited like before. This is better. I’m starting to see a few that I don’t like very much.

The fat chick is too crude. She and Shelby can’t ever shut up. The shot of her thong is enough to jump camera views.

I think Shelby is a “slow learner”. She is ditzy af. It’s almost like she’s on drugs.