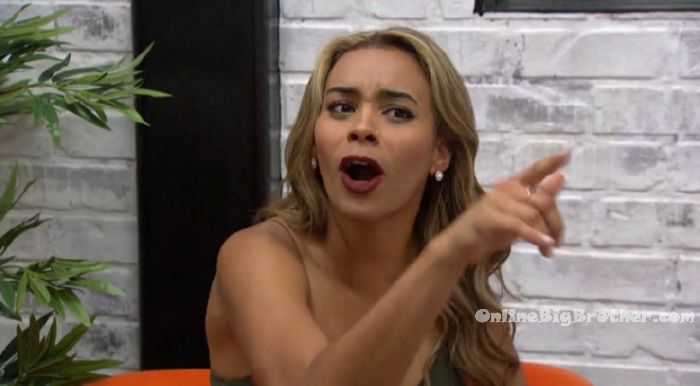 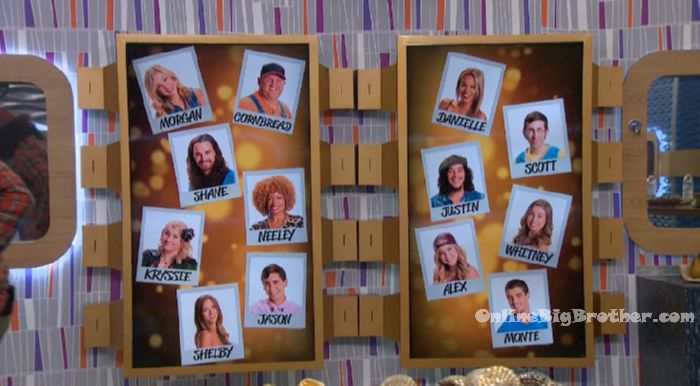 Watch the FIRST WEEK of BBOTT for FREE! Click here for your: 1 Week FREE Trial

10pm All the house guests are milling around having a million different conversations. Justin heads into the storage room saying to himself that Danielle is FINE!

In the lounge room – Jason and Danielle are looking at the BB message board from Paul, Nicole and James. Danielle reads “drop your egos” “Play your own game, you’re not Derrick!” “You’re going to cry” “Big Brother, NOT Big Baby!” “Try not to fall in love” Jason says she (Nicole) should have told him (Corey) not to say f@ggot so much. I thought she would have … but nope! Danielle says she didn’t watch the live feeds. That’s probably why I’m not a superfan. I hope Paulie isn’t like how he was in the game. I’m a mom … and when Paulie said something about her (Da’s) daughter I was going to lose it. I can’t even be mad at her. If it was me, I probably would have done the same thing.

10:45pm Backyard – Jason, Scott, Shelby, Whitney, Shane, and Cornbread are chatting. Jason talks about how Jace from his season was so over the top they had to get him out. It wasn’t even for game reasons. He was always running around shouting out his Instagram. Jason – this season is a young season. No offense Cornbread. Cornbread – We have such a small amount of people. This season is down to the basics. Jason – its down the the creme dela creme. I don’t know how I was chosen. They talk about what seasons they’ve watched. Scott says he’s been a fan since he was 10 years old. The rest of the house guests except for Morgan (who’s in the diary room) join them. 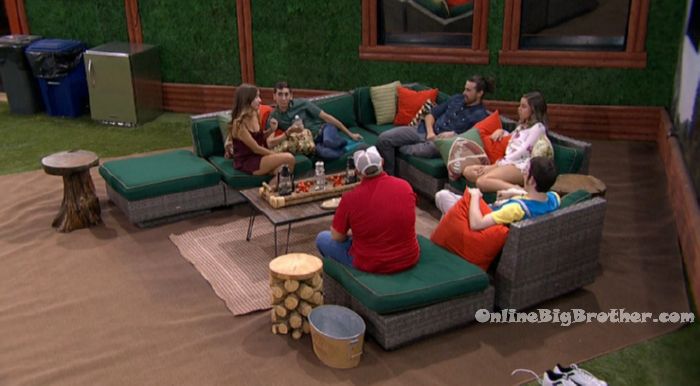 12am The live feeds go down :( Not sure why. It’s the first night. I’m sure they’ll be up again soon. 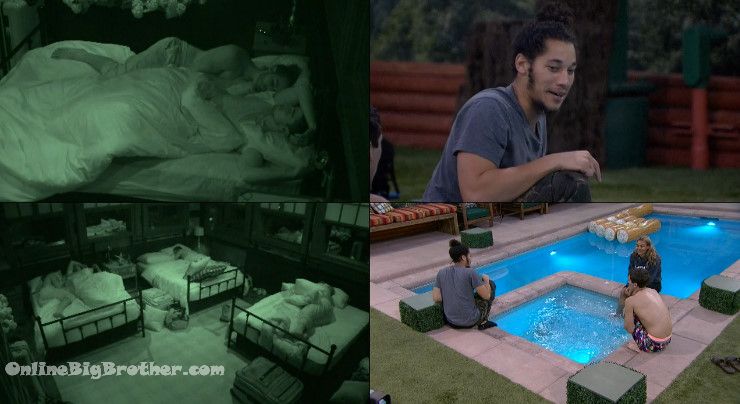 Simon and Dawg will be back later today to recap the day.

I think I wanna marry Shane. That man is FINE y’all!

Sh*t talkin the backyard already. Gotta love this show. Glad Jason got back in. I kinda feel he got screwed last time. Sisters in the house! Do they know? High hopes for this fall season!

Jason has already figured out that Akex and Morgan looks so much alike. He was looking at the board and wandering out loud if they were the same person

Feeds already down? Lol. Why does that not surprise me?

Grodner is a liar like usual, no surprise here.

Some same bb viewer is working too, but it tells me”unable to connect right now” when i try to login

Any idea what time the HOH comp will be today?

6.56am and three STILL up at backyard

hmmm… i truly think Jason NEEDS his sleep and LESS make up.. its clogging his face so much. He needs to let his zits clear, and his face BREATH…

i saw some live feeds, but it started kinda late, at 10pm, and kinda passed my zzzz time, but i thot CBS is kinda lame to not have a nice launching, just like UK BB.. its like, straightaway we see live feeds.

CBS is not doing this on a budget, and attempts to collect revenues for live feeds.. come on!!! Spend some moolah on at least some sort nice launching, or at minimum, some sorta intro with live audience, paid or unpaid.

i remember vividly that guy with a hat talking with excitement in the storage room. I believe he has African American blood and has fairly fair skin. Among the chaos, thats what pops out to me the most.

Caught a huge chunk of the feeds last night. Was fun watching them come in for the first time. I wish regular BB did this.
– Cast, so far I like them better than the BB18 season :) :)
– House isn’t as different as I thought I got WAY too excited for the have not room.. LOL
– Like the season so far. I’m seeing myself watching more and more as the weeks go on which means more updates :) :)
– With all that positiveness aside I’m sure CBS will find a way to ruin this season but at least there’s enough interesting people that I might not care.

I agree about the cast….so far.
I told you the house was barely changed! :) I couldnt believe yall were so excited. haha
Thanks for all the updates!

HAHA yeah I remember you did.. I’m easily excited when Halloween is involved :) :)

I like the way the cast already seemed to mingle & feel comfortable around each other. I have been watching the live feeds since Season 14 so I am curious as top how the HOH ‘s will played live on the feeds(I believe I heard that right). That should be interesting to see it live. Off of a 1st hunch though it is hard to tell who could potentially work together but for some reason I see Jason & Shelby(reminds me of a Jennifer Aniston & Kristin Wiig mix) linking together. Didn’t really have high hopes but the Hg’s seem pretty good could be better than I thought & Danielle is fine. She would have made Zakiyah & Big Meech’s head explode if she was in the house. No way the girls this summer would have kept her around.

I would have rather Jozea over Jason but Jason is better than a lot they could have picked from BB17 and THANK GOD nobody from BB16 was selected.

Truth. As long as I don’t have to see Nicole or James ever again I’m good. Ratcole winning over Paul was terrible. Paulie and his girlfriend voting for her was all about their friendship outside the game. I’m hoping if this works out maybe they will make some changes to the game next summer. No more vets

I was worried with a Halloween theme they might bring Victoria back. No ghost ever floated like her :)

Don’t the viewers vote though? So it doesn’t matter much who they target if we get the final vote :)

Simon / Dawg,
ok ..if you get american express gift card at shoppers…i hear ya but…when you have to subscribe to CBS All Access . ..it asks for addresd, state and postal code?
if you live in Canada what do you put down? they have all the states there and no provinces also isnt it A zip code in the states?

Hey MrjWall, Try making a US address up.

Yet Another Hillary Lie
Reply to  Frank

Now that was funny.

Trump's faulty microphone
Reply to  Yet Another Hillary Lie

thanks, is that your address Frank? Can i use it then?

Just pick any US address and zip code. Theyre not mailing anything so it doesnt matter :)

k..havent got this far yet…but i guess so eh?(about making up address )
i plan to do this…the hidemyass thing is relatively simple? or complicated to do? sorry for the questions but im hoping other Canadians are wondering the same thing
i appreciate your help and will show by way of contribution when it all works out and im catching up watching on cbsallaccess

Hey hi MrJWall, Cape Breton here.
I’m going to do the same, get AM Express card. I think all you need is state and zip code. I just googled zip codes for LA and lots came up to choose from. lol Let me know how you make out. Simon helped me as well. I will also be contributing to this site also, as soon as I get things on the go here this weekend. I hope everyone will send these guys something as it’s a great website!
Thanks again Simon for your help!!!

Hey hi again MrJWall. Sorry, I had another question. Are you paying by the month? Please let me know how you did it all. I’m also wondering if there is a way I can also stream this to my tv? Thanks.
Also thanks again to Simon and Dawg!!!

Heres a BB question lol
Do you think Jason will make same mistake like he did before? by that i mean all he did is sit outside smoking and gossiping , putting all the other HG’s down last time and had no clue what was happening

I know it’s still early, but the casting is already 100% better than the last few years. More diversity! Like the sisters and Cornbread. The sisters almost blew it last night with a nickname and another HG noticed. Wonder when or if it will be reveled.

Seems like everyone is from Texas and CA all of the time. Kind of annoying but oh well – seems like an ok crew – Kryssie is so annoying AF though. Talk about arrogant.

I don’t have the feeds,is someone related and they are not telling anyone?