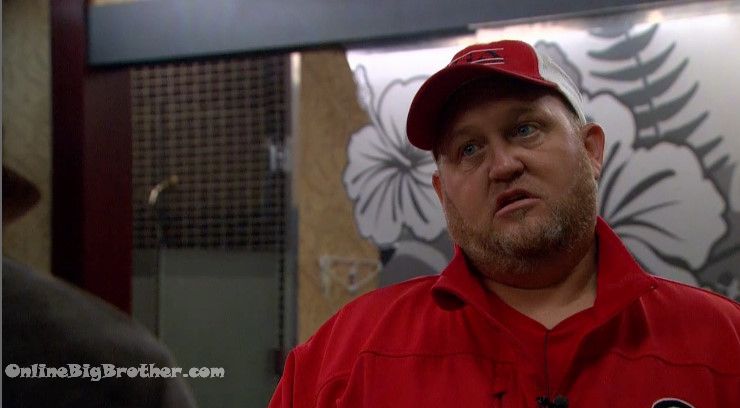 Monte says he “seriously likes Kryssie”they are both “Musicians” and both ”Work out all the time”
Monte wants Jason out says he has an unfair advantage being a return player.

Monte about Justin – “Everybody loves him he’s a good cook”

THey go round and round about scenarios Monte keeps reassuring himself that he’ll be safe next week.
Monte thanks Cornbread for being around and working through scenarios with him 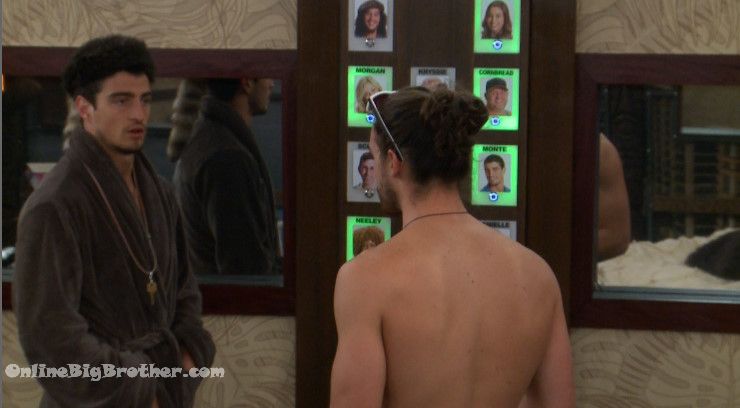 Shane joins them ..
Monte tells him he doesn’t want to put Danille up just wants to know how close SHane is with her, “I feel like her and Jason will start working”
MOnte – by the way Justine is coming for my head

Shane is suggesting Shelby goes up.
Corn leaves.
MOnte says Justin is playing dumb he’s coming after him
They start talking about who the pawn will be. Monte wants Jason out and he’ll be a nominee. HE’s thinking Maybe Shelbey but perhaps Danielle.
Shane says he doesn’t want Danielle to go up. Asks if Jason wins the veto who do they put up “Kryssie then?”
MOnte – Exactly, I will put Kryssie up
THey agree Jason and Danielle should go up.
MOnte says if they can’t get rid of JAson the back up plan is to backdoor KRyssie.
MOnte tells Shane to say to Danielle he has insider info that he’s close to Monte than they think and she’s safe.
Shane – you’re a pawn
Monte – ya I think you’re a pawn.. 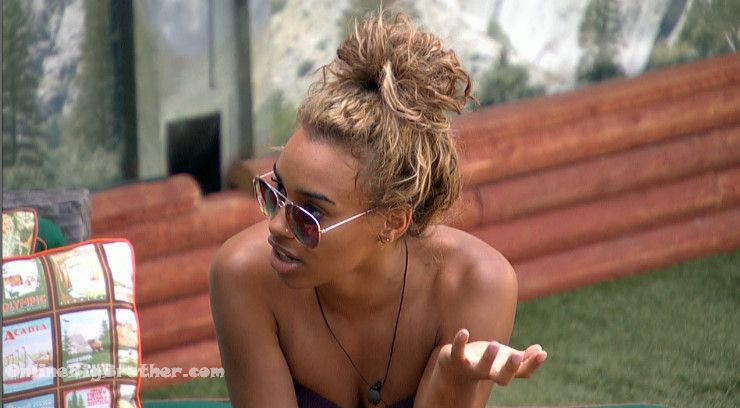 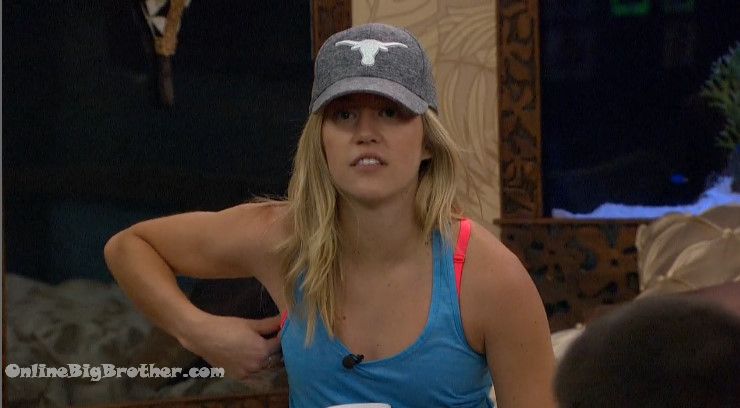 1:33pm Whitney, Alec and MOnte HOH
MOnte saying he’s putting Jason up along with Danielle. He’s going to say that Jason’s played the game and has an unfair advantage and that Danielle is strong she’ll be good competitions for him in the Veto.
MOnte is sure he’ll be nominating Danielle and Jason his target is Jason. 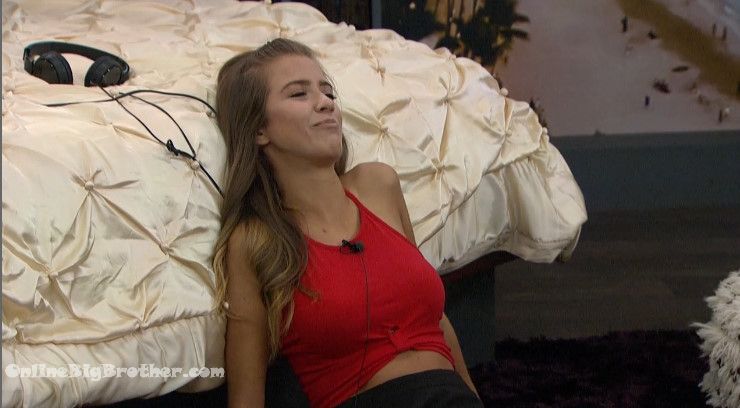 1:45pm HOH Shelbey and MOnte
Shelbey says someone is saying they are pissed they had to “Set their profiles to private because they want to be a public figure”

Shelby warns someone that is here to be known will make some “Big F****g move” so they become famous. Shelbey says the person says “Promote my album”
Sh;bey scoffs says she’s here to play a game not promote her album. (They are talking about Kryssie)
Monte- I’m a musician she’s a musician.. I work out she works out..

Shelbey says Scott has been soaking everything in adds that he’s someone good to have on your side. 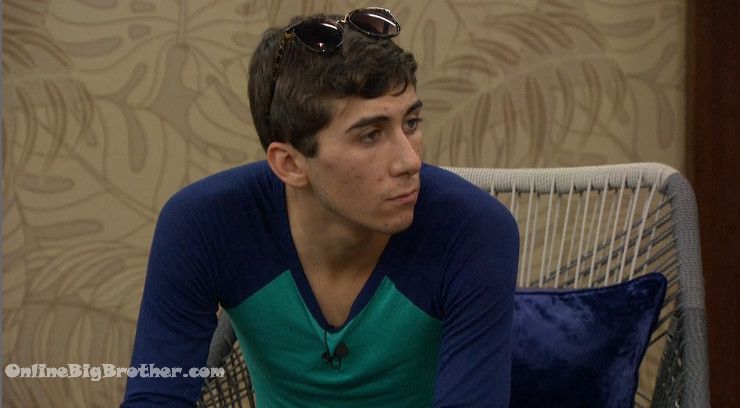 2:22pm Jason and Monte HOH
Jason – it’ll do me no benefit to site outside and not talk to you one last time
Monte says she likes everyone “This sucks” Says he wishes there was 2 people he really didn’t like.
Monte – with it being the first time I’ll have to dilly dally… what the heck.. (WTF)
Monte says it’s not personal
Jason agrees none of this is personal
Monte highlights this is his first time.
Jason says other than where the “Swiffer is” he doesn’t know where anything is.. “It’s s a shuffle and card game every time“
Jason – just really consider your option.. I’m a easy option but like I said you never know where the benefit might come I’ll be the pawn..
Jason says he’s good with vibes doesn’t think he’s in a good spot this week.

Jason – if no one wants to weaponise me everyone is missing out on the chance…
Monte – you’ve been on of the more bold people here…
Monte says he’s concerned it’s him Shane and Jason as the main targets in the house.
Jason tells him he knows if he goes up and doesn’t win Veto he’s going home everyone in the house is already ignoring him.
Monte – you’re smart and they know you are playing the game
Jason – if you can help me… I’ll scratch your back you’ll scratch my back twice…
Monte tells him he likes that he’s not sucking up to him.
Jason – everyone wants to hang out here with the power
Jason – you know where to find me I’ll be out in the cancer section… BUT.. at least you know He ain’t up here kissing ass.. . He’s not like that..
Monte – that’s the thing with this man… Even if you do go up…. THere’s still going to be MASSIVE respect to you just for how you’ve approached this leading up to it.
Jason – oh of course
Monte says he’s not saying Jason is going up… but if he does mad respect …
Jason warns about getting tunnel vision..
Jason says if he’s safe this week he’ll give Monte “the hand shakes of all handshakes…” meaning “you are good if I win HOH” 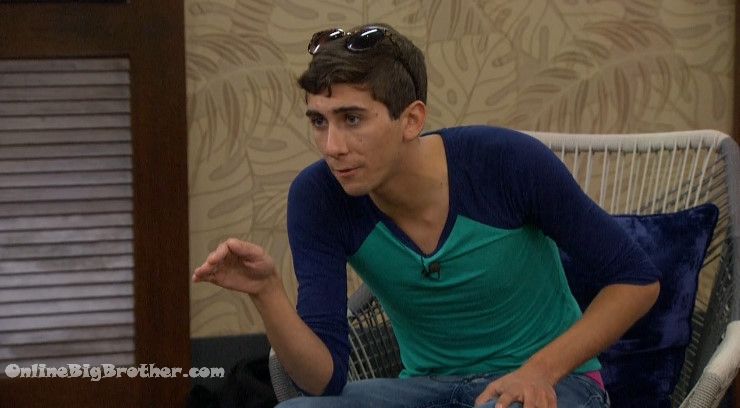 Jason – If I have Power Monte I ain’t looking at you…
Jason says he’s a shield keep him in the house.
Monte says in a round about way if Jason goes up and Jason wins the veto and is safe he’s cool with Jason. Otherwise ……. Not so sure.. (This HOH is a …. interesting thing to watch)
Monte – that dude is legit… he knows what he’s doing…
Monte – I like everybody here..

Jason tells him he knows he sways “Way left” to the rest of them but “The last person they think you roll with is the best person to roll with”
(Drop the mic)
Jason – that is all I can really say…
Jason – if you take me out you are just going up a list with some of these people…
Jason – if my ass aint here…. I’m looking out for you in the long run

Monte tells him he has his respect he “Straight shot”
jason tells him people will make alliances left and right but when it comes down to it this game is based off loyalty “You know what I’m saying”
Jason – If you won’t give you’re loyalty to someone than no one will give it to you you’re a floater you are screwed you don’t gain the respect of the publicv you dn’t gain the resptect .. nothing.. ”
Jason says he might have a small group and he’s happy for him
Monte – it’s a small group of people/
Jason – the cracks in the cement are going to come form no matter how good you pour the concrete
Jason tells him he’s not coming after him for 3 weeks if Jason survives.
Jason tells him he doesn’t know if Monte is number 1 on peoples list but Jason knows he’s number 2 on People’s list. This is why Monte needs Jason to stay.
Jason warning if he goes everyone moves up on the list. 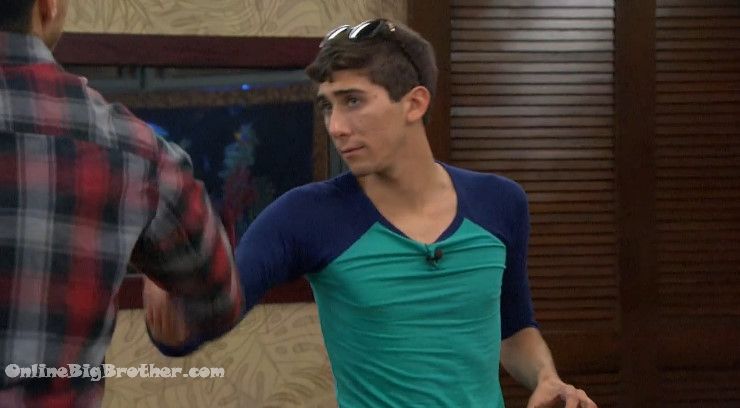 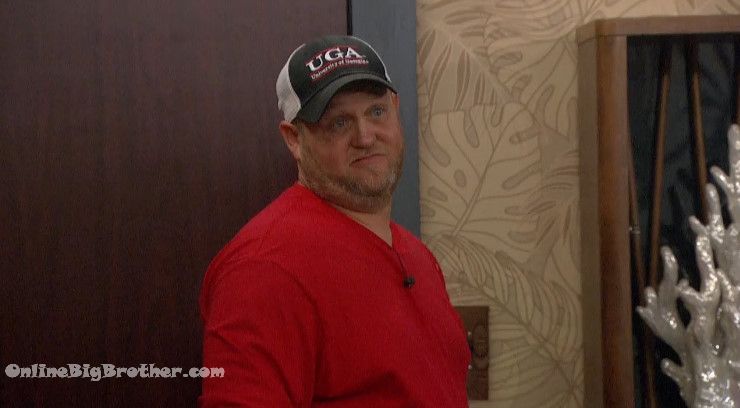 2:53pm HOH Monte and CORN
Monte – I’m not going to do you wrong cornbread…
Monte – I haven’t guaranteed them safety to Jason, Danielle… Shelby … Because it’s not guaranteed.. Sometimes you gotta beat around the bush
CORN – It’s a game BRA don’t feel bad about playing the game.. CAUSE I DON’T.. I’m having Fun doing it..
Monte- If jason was a first year player he wouldn’t be going up.

CBS All Access Live Feeds! Test them out 1 Week for FREE! 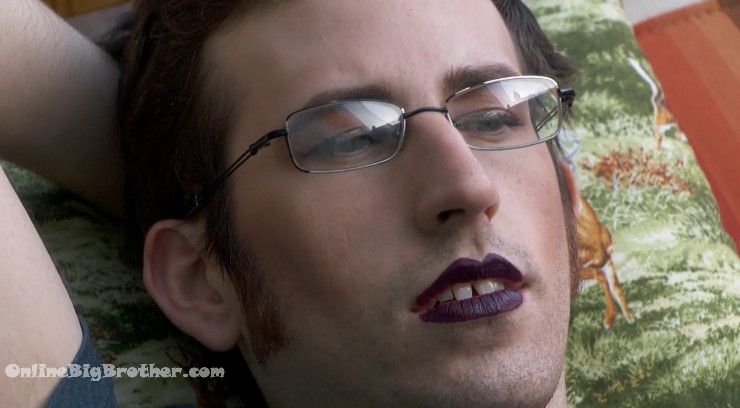 4:58pm We all gotta try something new sometimes…..

Monte has nominated Danielle and Jason for Eviction 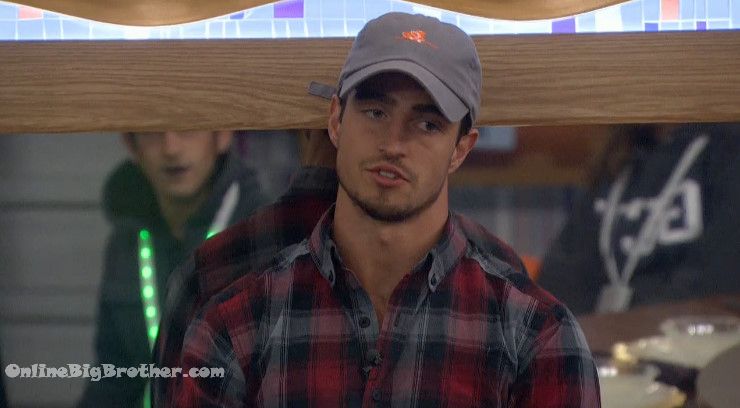 Monte says his nominations were a “Stab in the dark”.. ” Nothing personal guys” 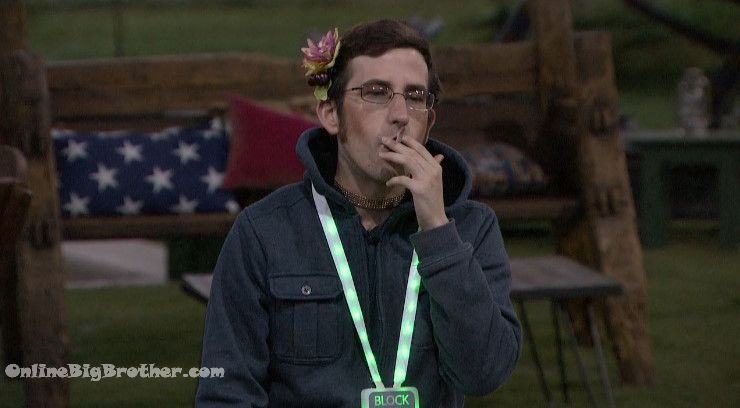 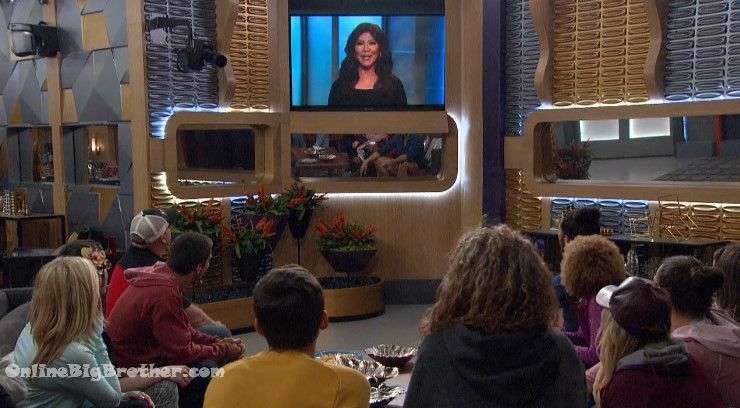 The safety Ceremony’s are over this week. 2 of you are now nominated for eviction those of you not on the chopping block are not outta the woods yet.
I Promised you all that on Big Brother Over the top Viewers will be impacting the game more than ever. It’s time to deliver on that promise.
Each week viewers will vote and nominate a third houseguest for eviction America’s nominee will immediately join the HOH’s nominees on the block that means each week there will be three houseguests nominated for eviction.
No listen closely.. I have some important rules about America’s nominee First America cannot nominate the first houseguest 2 weeks in a row..
Second all three nominees will complete in the veto competition.
Third, Should America’s nominee come off the block because of the veto America WILL NOT NAME A REPLACEMENT Nominee.. That means at each live eviction there could be 2 or 3 houseguests on the chopping block.

Didn’t like Jason previously, but boy…is he good with the logic rap!

And with that pic, Scott immediately shoots to the top of Americas favorite list!!
This dude knows what it takes!!

Doesn’t shoot to the top for me! He stays at the bottom!

Jason making a deal with the devil. Improvement!

I disagree that Monte is the worse HOH. He had one target and that was to get out the Jason because he is a vet. He gave everyone the chance to talk to him. They’ve only been with each other for 5 days. I don’t see him up on his high horse either. Yes the HOH was given to him but there was no competition like BB has and Jason had the opportunity to give Monte the crabs but he chose not to. I hope all HOH’s are not like this…I want to see some competitions.

I think it will be interesting to see what America’s power is, since it’s clear it’s going to change the nominations/eviction results in some sort of fashion etc…they may not be all-stars, but this cast is continually growing on me!

Definitely unhappy with idea of taking out Jason out 1st. I’m going to protest in the only way I know by casting a vote for Shane as the 3rd nominee. If America agrees, maybe it will send a message, maybe not.

Hi! I was wondering if we could get a pull up?

I like Jason and I get taking him out first since he is a vet… I am hoping Jason survives this week though, as I would like to see more game play out of him. The only way to help Jason is nominating someone from Monte’s alliance, possibly a care package and not voting him out if America can effect the game in that way…

Well I like Jason, but for their game they should evict him. Every season that has had a vet, a vet has won the season.
Also he already has fans from BB17, so he will always get the voters support. Reminds me of Elissa from BB15. Because her sister was Rachel Reily, she would always get voted MVP.
For once, I would like a season were there are zero connections to other seasons, or famous siblings. *cough Frankie *

Lets get Cornpone out then Monte or flip the order I dont care……..I kinda like most of the rest and it would be nice to keep the entertaining ones in the show longer than usual……..and Justin well he’s tv gold.

If cornbread, which the houseguests love, gets nominated… Red flags will rise up amongst all houseguests which will maybe cause a house flip…. Yasssssss!!!!

Okay! This is the plan! Nominate “Can’t Talky” (Kentucky for those who didn’t get that)to scare her (did you all see her face when Julie announced America’s voting?!!! Ha America sees you boo scheming and not doing any chores! And vote out Danielle! We don’t need another Zakiyah! Imagine Justin with the sitting ducks?! Priceless! Victor and Justin being from New Orleans would be great TV.

Will there be 3 noms because of America’s vote?

Looks like everyone is voting Cornbread to be America’s nominee

Yet Another Hillary Lie
Reply to  Chessie_K

That is my vote.

Another Liberal Loser
Reply to  Ummm