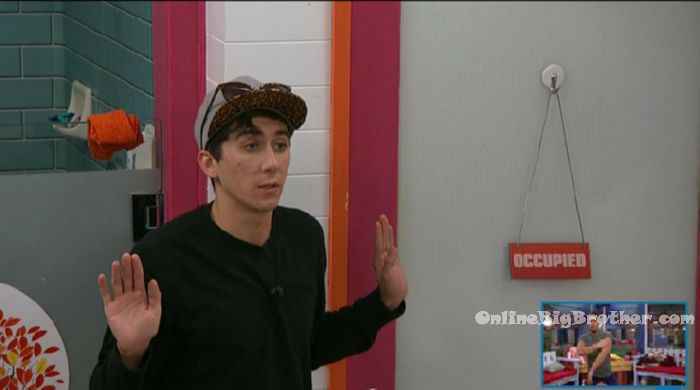 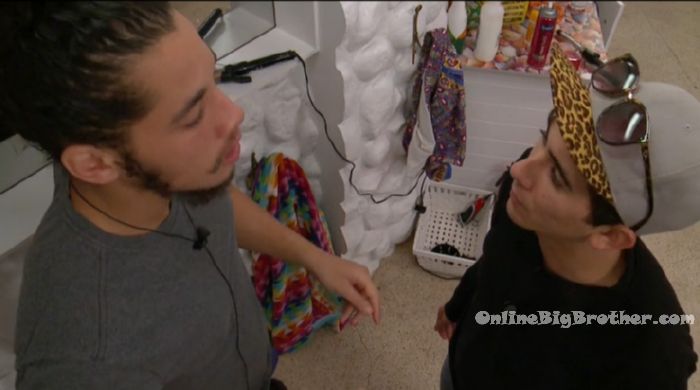 9:20pm Bathroom – Justin & Jason. Justin – I’m going to talk to Kryssie so that maybe we can get Scott’s head off the block this week because it would be good for our game. Jason – no, no, no. Justin – we need to get Shelby out of here. Jason – its not good for our game. Plus he’s already told everybody that they’re working with us. Justin – that’s not true. Jason – Alex’s been the one saying that. Justin – so you think it’s a bad idea? Jason – I think we just let Kryssie do whatever the f**k she wants. Jason – I don’t trust him for sh*t. I think he’s someone we have to deal with in these comps and he’s untrustworthy. He’s never going to win any of these damn comps. Jason – we’re going to show our a$$ more to Kryssie trying to save him. I tried to save Alex and it made me look bad, so I’m not trying to do nothing about nothing. I want her to do what she f**king wants. It will just look like we’re playing too hard and trying to run her and sh*t. That side remains plenty strong without him. He won’t be coming for us but I don’t see the long term benefit. I’ll think about it.

9:55pm HOH room – Morgan & Krssyie. Morgan – I know its either going to be be or Alex going up and I just want you to know I’m okay with going up. I know people say pawns go home but I trust you. Obviously I would not hold that against you in the future. Krssyie – that’s good to hear. What I need from and your side if anyone wins the veto do not touch Scott. Scott is here to get tv time and just here to do Scott’s stuff. Morgan – if you’re we’re here in the future I definitely think we should work together. Kryssie – if Scott and Shelby are the next to go… 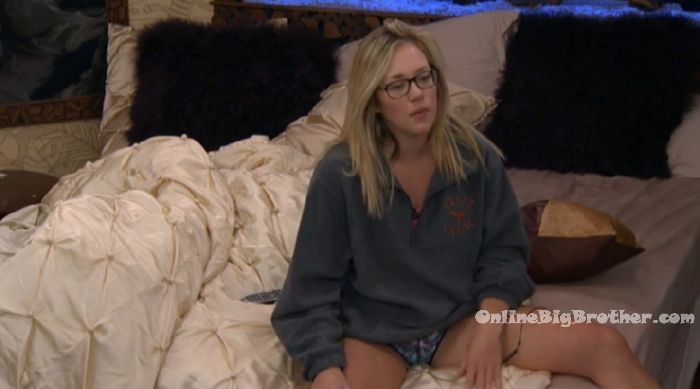 Scott tells Alex to lay low. Alex – I think he keeps trying to reassure us so that we’ll be good this next week. Scott – Justin said he would prefer if Shelby went home. Kryssie said she would prefer me or Shelby go home. Alex – for our game its best if Whitney goes home. I don’t want her to but…. we can talk later. Alex – if Scott stays’s he’s the key for me working with Justin and Jason. Scott is good and bad for me. 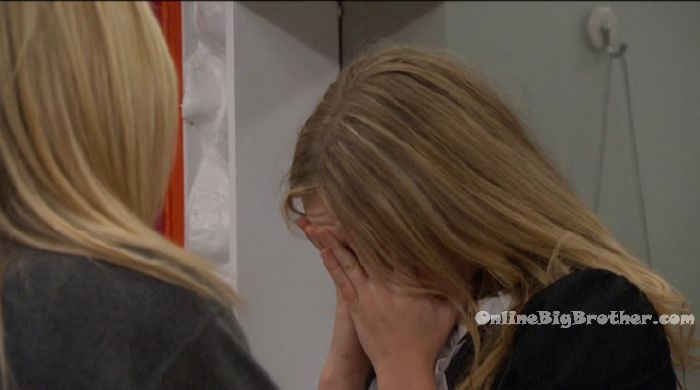 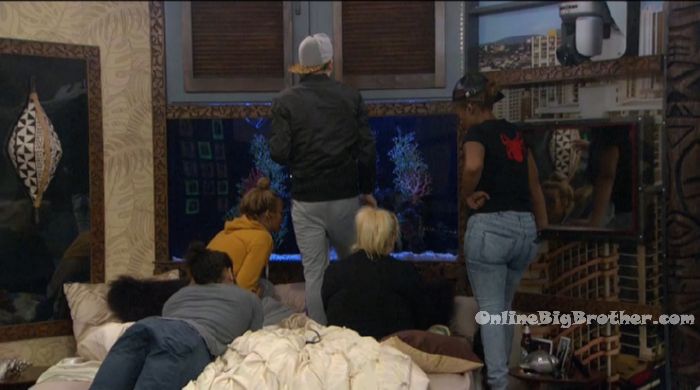 12am HOH room – Kryssie, Neeley, Jason, Danielle and Justin help one of the fish that was stuck in the coral. Big Brother tells them to stop that but they get the fish unstuck. They all watch the fish for a while and then get ready for bed.

1am All the house guests are sleeping. 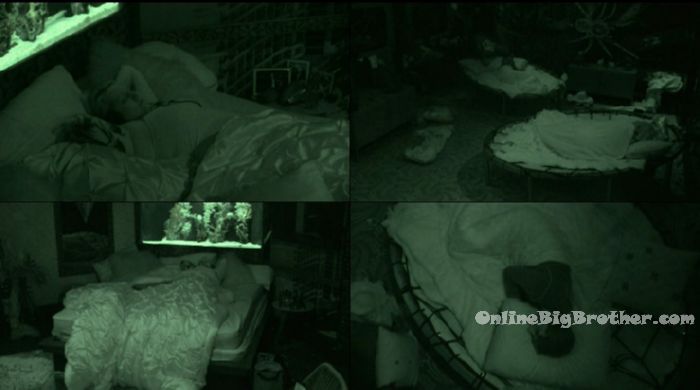 Anyone else hear when Danielle made fun of the ‘girls’ for playing ‘what are the odds’ then later we see the LNJ all playing it with them! How about Jason saying he wanted to ‘KILL’ all the girls in their sleep tonight…….true colors shining! Someone from their side needs to go to knock them down a few!

Get over yourself. You take everything these people say so literally.

No, just pointing out the massive amount of hypocrisy shown by the LNJ. They are the ones continually claiming to be the adults and taking the high road because they are the ones with a soul. They keep proving that they do not have a soul and act like juveniles.

Do not have a soul? Lol what in the world are you talking about?? You’re taking an online show wayyy too seriously.

Gary and Mallory
Reply to  Anonymous

Whitney has cl@$$! She blindsided nearly every evictee that has happened so far and has all their blood on her hands! If she gets to the end, she will win!

Can you say Hawt! Woo!

Seriously, what show have you been watching? Whitney is a MAJOR floater. She hasn’t done anything in this game, except to putting down other ppl.

Yes! Whitney is a little higher than Justin on the polls for America’s Nominee!!!!

Isn’t playing the game at all, hope she goes

Neely going home 4-3 if she is 3rd nom and stays on the block after veto. I wouldnt be surprised to see Justin vote her out too just to make sure, making it 5-2 as he wants both Danielle and Neely out and he likes the Ball Smashers and thinks keeping Scott in the game will help him.

Yet Another Hillary Lie

I’m really looking forward to the day Jason gets voted out.

I see the “adults” in the house really gave a lesson on how we should live our lives yesterday and last night. The self proclaimed life role models put their true colors on display agai. Death threats by Jason, crude sex talk by Kryssie, Dani, and Neeley, Jason saying that all of the girls are 22 year olds that have done nothing with their lives. This coming from the 27 year old still living in his mother’s basement. This is all over and above the usually bashing of looks and body parts and random nastiness from the LNJ. Yep, a real display on how to act by people who claim to have a soul yet show that they are soulless. Truly amazing…..

Yet Another Hillary Lie
Reply to  Gozurman

LNC has never heard of practice what you preach.

What’s truly amazing is that you care so much about these people.

Hahahaha if you didn’t care you wouldn’t be reading and commenting on the comments! Idiot!

GASP. Crude sex talk? How ghastly! Alert the masses to burn those ungodly wretches at the stake!

I think its hilarious that Jason says Shelby/Whitney/Alex/Morgan haven’t done anything in their lives. He’s a GROCERY STORE BAG BOY and LIVES IN HIS MOM’S BASEMENT! Shelby graduated from law school in 2 years (huge accomplishment), Whitney works in the medical field, Morgan is a publicist, and Alex is an animation designer…all of them have already eclipsed Jason’s “accomplishments.” #TeamPlastics #TeamB%&#SMASHERS #blondesdoitbetter

I do not have the feeds and this is the only site I go to but I have not seen or heard of a time when Kryssie has taken a shower and it looks like the same outfit since the start. Maybe it is just the same black sweater but it looks like she has never changed. As skanky as she is her boyfriend must require batteries (and a 2 X 4 as to not get lost)

My thoughts exactly…don’t think her black jacket has been washed….pew

Maybe they just don’t put her on camera when she showers since we already have to see her cleavage all day, every day.

Kyrssie cannot have a her tattoos shown so they don’t film her when she is going to get a shower. Maybe that black jacket is the only one she brought so she has to wear it everyday

I don’t know why all the thumbs down it’s the truth!

She has said she has tattoo’s which are copyrighted so cannot be shown on TV, that’s why she has to have her arms covered at all times.

With the same ugly black zip up that has to stink to high heaven by now?

I can’t understand why people on this site like Jason, I know not everyone does. The crazy thing about that is when Cornbread make a joke with the word Jew, America turned on him. When Monte said Justin probably stolen his clothes, which I think was taken completely out of context. America turned on him. The LNC has said so many hateful, and childish things. Then you have Jason saying how much he hates these “bitches,hookers,hoes,the c-word,and many more.” Then on top of that he’s talking about killing them in their sleep. And America still loves him, that’s hypocrisy at is finest.

Jason likes to elevate himself by knocking others down. I really believe he is a insecure man. It’s a sign of weakness!

Nothing manly about him.

As nasty as some of these houseguests are (and that can be really bad) some of the nastiest people are found right here on this site. You take everything literally, and bitch and moan constantly. There are very few comments here anymore that are worth reading. And before you go off “half cocked” and tell me not to come here and read the comments any more, don’t worry, it no longer is worth my time. Some of you are worse than the houseguests. Sitting behind a computer screen bashing people because you don’t like their personalities and because you might not see them showering, and continue on to call them skanky etc., is just too much. Practice what you preach, and get a life for goodness sake.

Yesterday I saw a few comments that Danielle was getting better, not sure what those people are seeing. Her and Jason were just sitting on the couch talking so much crap about Shelby hiding the frosting. Wasn’t it them who started the chocolate war, and she gets pissed about the frosting. She was also talking about how much she can’t stand Shelby, well a lot of America can’t stand you Danielle.

week 4 Oct 27-28 Eliminate Three Eviction Votes
The winner of this care package receives the power to eliminate three eviction votes – whoever wins it could single-handedly flip the house by preventing three houseguests of their choosing from voting in next week’s eviction.

week 5 Nov 3-4 Co-hoh
This care package gives the Houseguest of your choice the power of being co-head of household. The winner will be safe for the week, share the perks of being HOH, and also name one of the two nominees for eviction.

Week 6 Nov 9-11 Double Eviction Veto
During this week’s double eviction, the Houseguests will not compete in a veto competition. Instead, the winner of this care package will be awarded with the power of veto.

Week 7 Nov 17-18 The Final 4 challenge
The winner of this care package will receive the opportunity to automatically advance to the final four. In order to earn safety this week and claim their spot in the final four, they will have to complete a challenge given by Big Brother.

I don’t like Kryssie either, but the kind of comments posted about her by “anonymous ” are ridiculous.

what is ridiculous is her thinking America (or any country) wants to hear about how she thinks she would look good getting “railed” on TV or some of the other things besides burps that come out of her skid mark mouth and a$$ as she calls other women hoes and skanks. She has brought it on herself and I hope they can find a boot big enough to kick her fat a$$ to the curb soon

So I see Morgan or Whitney getting the next one, then the other and hopefully that means Jason or Justin get the last 2 Care packages! Yes!!!

For the remaining care packages I will be voting to receive them: Morgan, Shelby, Whitney, or Scott if he is still there. Possibly Justin if I think he siding more with the girl ball bashers. But it looks to me like the girls are getting the guys out and the guys appear to be letting them. I hope Neely goes home this week as America’s eviction nominee. If that doesn’t shake up the LNJ Then I don’t know what else will.

Shelby for the care package but okay with Whitney. I want to see everyone’s face if Shelby gets it. Jason needs to go soon. Tired of him.

In life we all have different personalities, how boring would it be if we didn’t!! So one person is disgusted/offended by Jason and one thinks he is hilarious. Verity is the spice of life they say, embrace the differences!!!