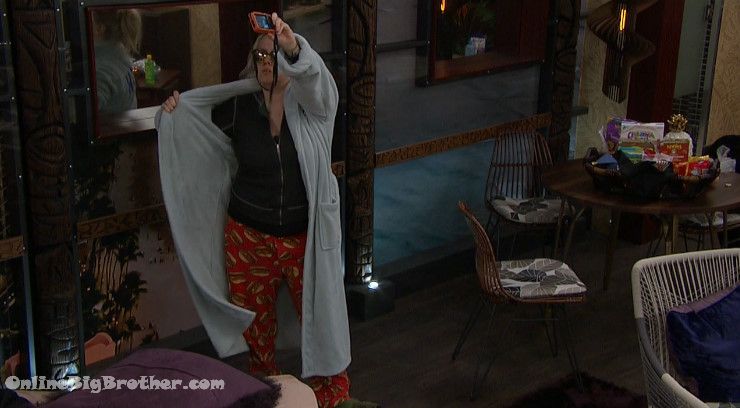 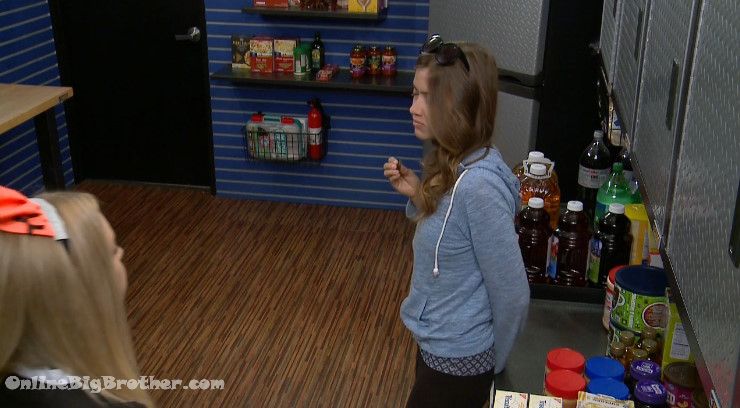 Alex telling her she’s the safest out of everyone.
Alex says Morgan and Whitney are being told Scott’s the target and Scott’s being Told Morgan/Whitney are the targets.
Shelby – no one tells me anything..
Alex – seriously you’re ion a good position.

Alex – have you talked to Kryssie
Shelby – I’m going to ..
Shelby – I’m probably going up and it’s in my best interest to go up
Alex agrees everyone should want to go up to get a chance of playing for the veto.
They agree if Kryssie puts Scott up it would be stupid because it will free up Jason and Neeley for America’s nom 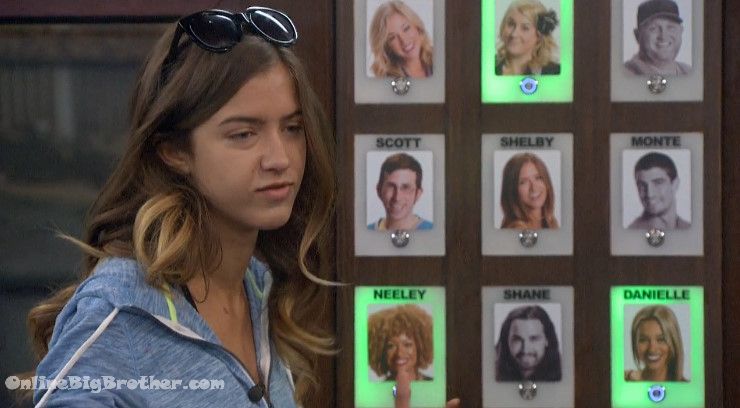 12:12pm HOH Kryssie and Shelby
Kryssie saying she doesn’t have a beef with Alex.
Kryssie – there’s one person in this house that I disrespect all their game choices.. (Scott)
Kryssie tells her Scott is her target.
Shelby says don’t put her up if she thinks she’ll throw the veto because if Shelby is nominated she’ll fight for the VEto.
Kryssie says if she puts Scott up he stays up.
Shelby says Scott is her friend she doesn’t want to see him go but better him than her.
Kryssie points out Scott is the only person Shelby’s side of the house has suggested as a target.
Shelby mentions that Neeley or Jason will be America’s Nom if Scott goes up.
Kryssie doesn’t think that’s a guarantee

Kryssie going on that Scott is attracted to Alex and it’s gotten to him. That is why he’s attached to her, “Alex and Scott being an applied side alliance is hurting her in the house that is why America gave her that safety this week” 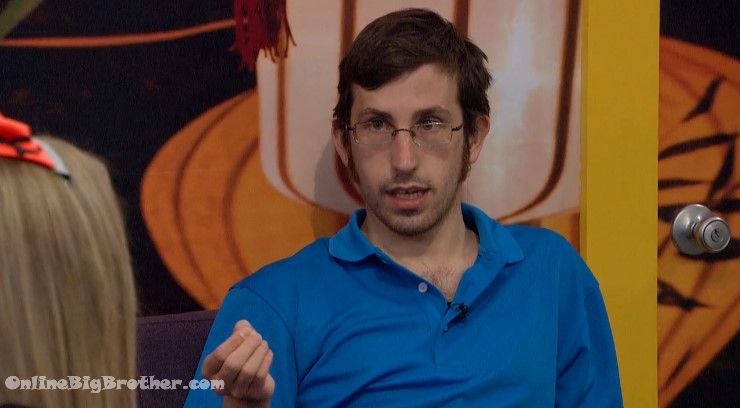 12:15pm Alex and Scott
Agreeing that MOrgan and Shelby will be going up. THey hope Neeley is America’s nom then at least they have a chance. Scott says Whitney is better for their game than Morgan. He points out that Jason winning HOH would me he’s going after Whitney. He also think with Whitney in the game their chances of gettign a care package go up. With Whitney in the game they can always move the target on her saying she’s so well liked that makes her a finale threat.
Alex points out that Justin, Neeley and Kryssie LOVE Whitney they will never put her up over the two of them.
Scott – Whitney’s an actual contender to win this game.
SCott doesn’t see Morgan getting a care package, he thinks she’s a bit basic. 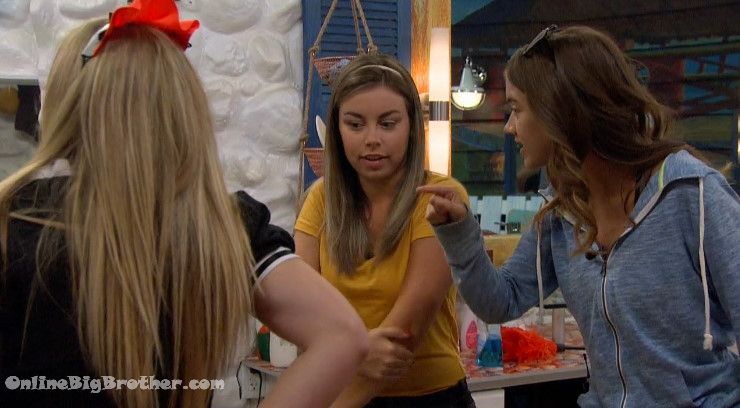 1:15pm Alex, Whitney, Shelby and Morgan
Shelby relaying to Alex that Kryssie told her that Alex and her boyfriend aren’t “Solid” because even thought they’ve been together for 5 years they split up for a bit and only recently have been together for the past year.
Shelby adds that Alex should reduce the time she spends with Scott because people like Kryssie are thinking there’s a side alliance between those 2.
Alex – Oh my God she is crazy .. she’s a plant.. like are you not allowed to talk to guys in this house
Shelby – apparently not
Alex – Can I start a rumour that she’s in love with Justin
Shelby – start a rumour that She’s in love with Neeley
They’re not sure who the target is Scott or Morgan… 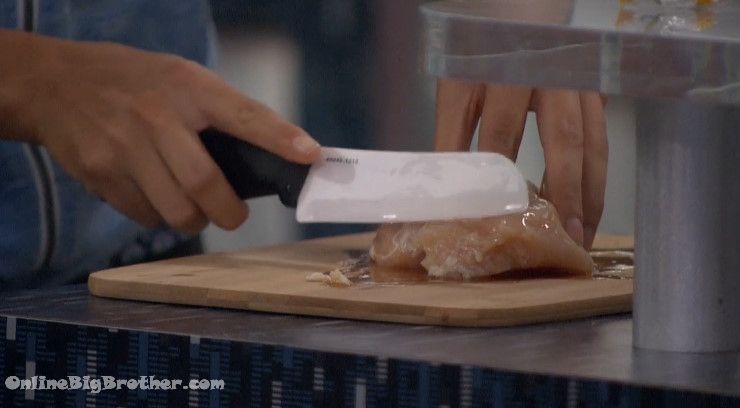 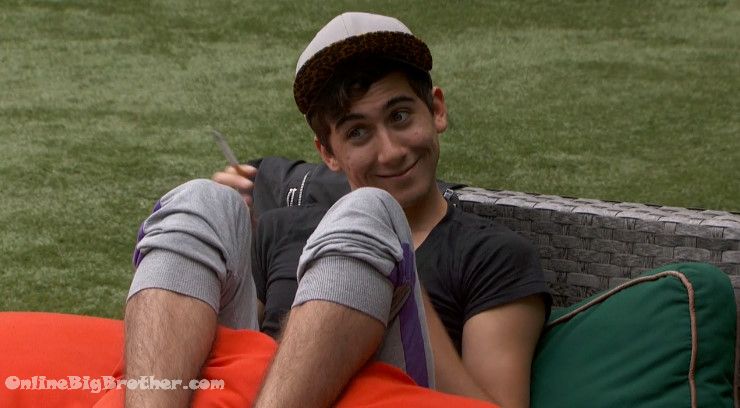 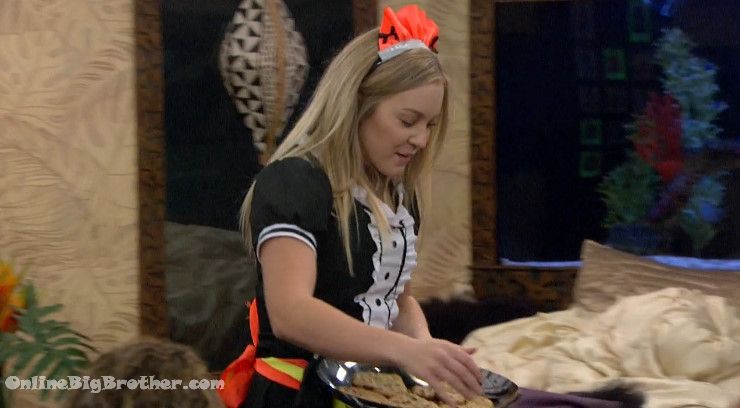 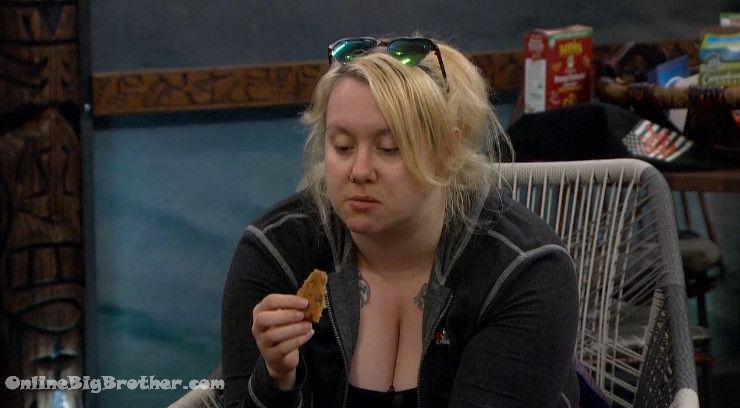 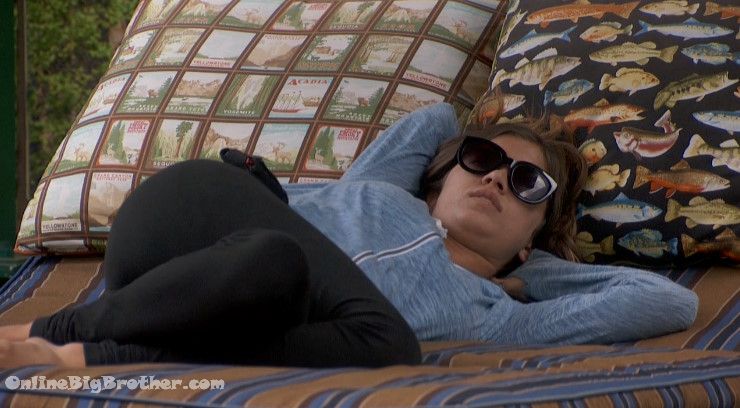 3:58pm Scott and Shelby
talking about Kryssie Finally “picking up the terminology of Big Brother”

5:11pm Kryssie tellS Whitney she has nothing to worry about tonight. She’s not going up as a pawn, if Morgan is a nominated she’s not the target. 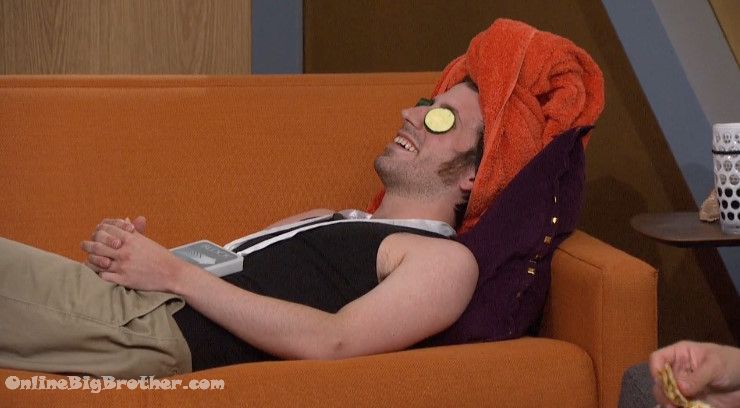 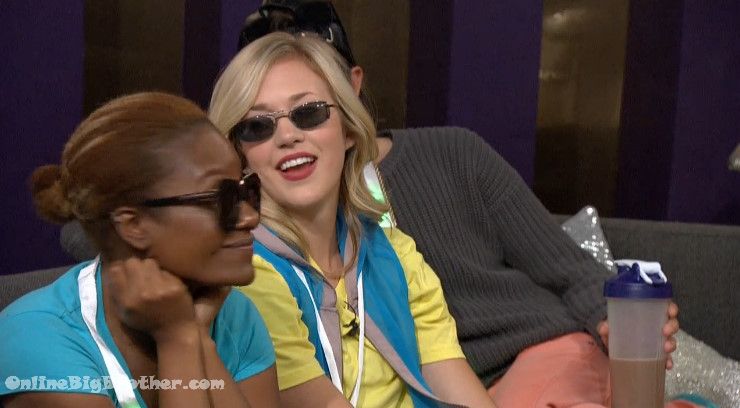 Scott and Morgan are nominated for eviction. 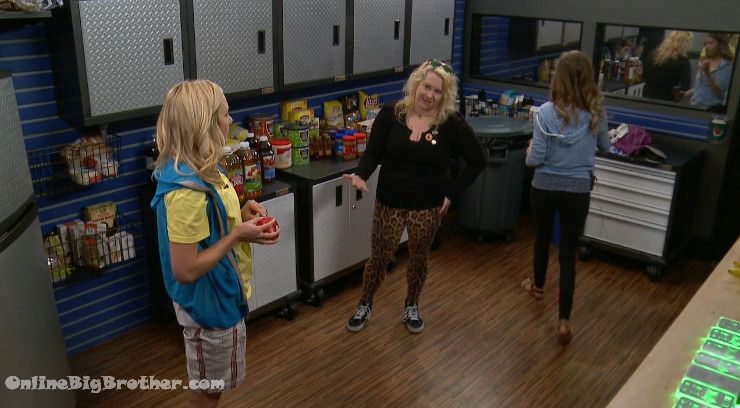 Kryssie tells them she’s trying to have the cleanest HOH possible. 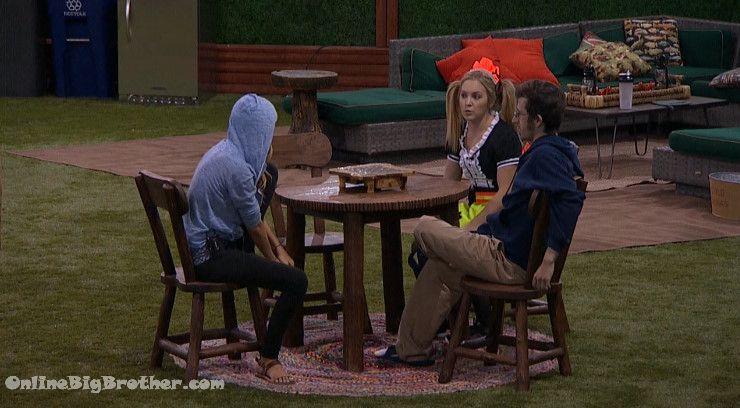 7:30pm Shelby, Scott and Alex
talking about trying to get Neeley out if she’s America’s nomination.
Shelby – is there anyone on that side that doesn’t like Neeley
Scott -Maybe.. if Neeley is on the block I have a shot
THey agree if Neeley is nominated they have a chance they are going to go out “Swinging”
Alex – we can flip this aroun d
Scott – I’m very hopeful.. I’m going to bed early tonight.. (to be ready for the POV)

Alex asks them who the target is
Scott says he’s the target. Morgan is nominated because she can’t win comps. Scott knows if it’s him and Morgan on the block he’s going home.
Alex says it will be amazing if Neeley goes home on Kryssies HOH. 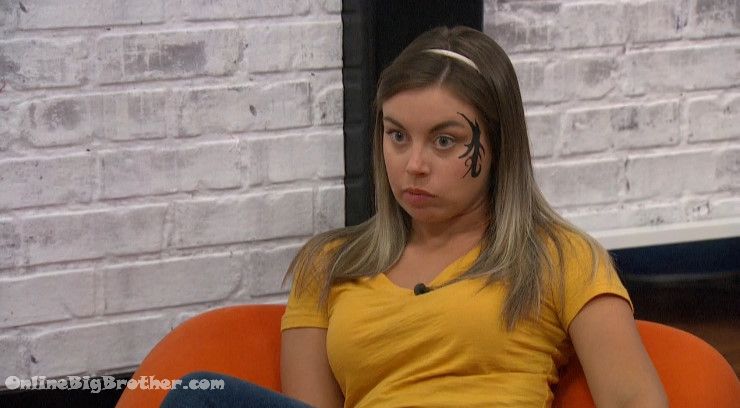 8:27pm White room Shelby, Whitney and Morgan
Trying to figure out who to pick for POV. Knowing if POV is used Whitney/Shelby go up.
They agree not to pick Alex
Shelby – she needs to save her victories in HOH righ tnow 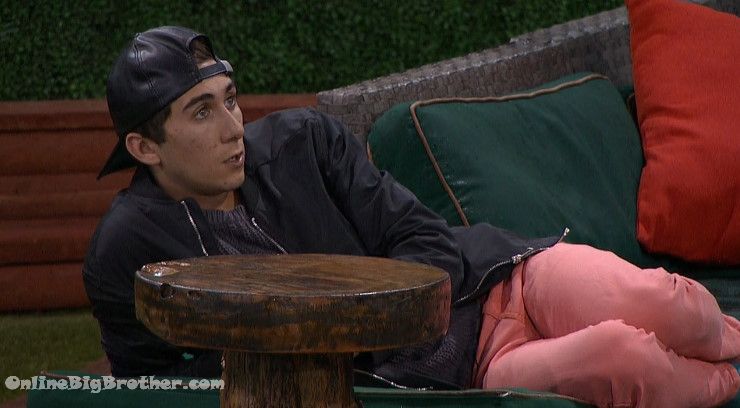 9:20pm Justin and Jason
Justin says Neeley has something with Morgan.
Jason – She was pushing hard for Whitney
Jason says they have to pull some shit to keep Shelby safe.
Agreeing they can get Morgan out over Shelby if Scott wins the POV.
Jason – Morgan or Scott win they will be replaced with Whitney.
Justin – we got to pull the trigger soon on Neeley’s a$$

Jason says they are in trouble if the America Nom is him or Neeley. If they get Neeley out they will cause big problems on Kryssie’s side.
Jason – it’s going to be shaking.. the smoothest is America nominates Shelby.. We have teh power Shelby or Morgan to go.. I don’t want Whintey out yet
Justin – f*** me neither 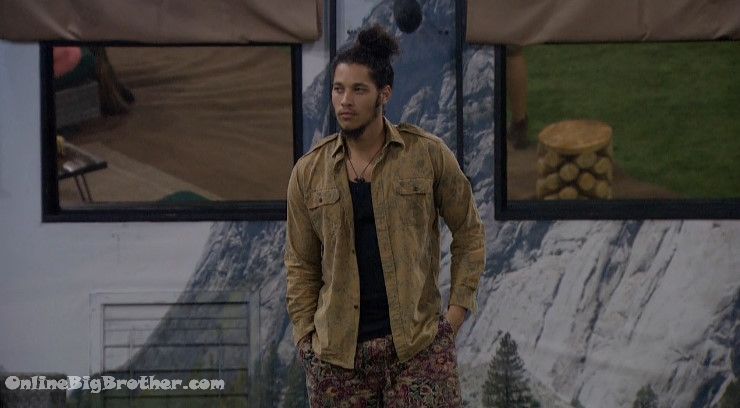 I’m one of those victims that used to love LNJ and now I am starting to like the ballsmashers way more. Hoping that Neeley gets nominated and sent home. Rooting for Alex and Whitney I believe.

Oh is that why we never see Neeley in there? I thought I saw Danielle in there but she stayed on one side of the room the whole time. I thought it was strange but now it makes total sense (eye roll)

My mission this week as a long time BB fan (since July 2000) and Ball Smashers supporter, is to put all my votes toward getting Neely on the block as America’s Nominee and all my votes to getting her evicted during Kryssie’s rein as HOH! Lots of chatter in the chat rooms indicate I will probably get my wish!!

BBMOMI
Reply to  Marsha The Moose

Can you tell me what chat you go to?

The Shield
Reply to  Marsha The Moose

I know! I love the fact that Alex is now wanting Whitney gone! Like not right now, but EVENTUALLY!!! And she is showing her “TRUE COLORS”!!! It’s called playing a games bitches! Stop Hating!!!

I’m so over Kryssie and Neeley. They say something in just about every scene I watch, even on the feeds, where i like them less and less.

It is weird the house being this divided. So clearly defined. Its still big brother, so its still fun for me.

Thanks Simon and Dawg

Morgan keeps using “ Thats so gay” and “ It’s gay” to describe things she doesn’t like. I don’t see people making a big deal out of it though. I guess it’s only a problem when someone from the LNJ say it.

At this point people from both sides have said messed up things, so I hate them both and I’m just going to be rooting for people based on gameplay.

I don’t understand why Kryssie doesn’t shower more often. As greasy as she looks, I can’t imagine them smell that she emits.

Can you imagine the sweat stink under her boobs? Obese women need to shower twice daily due to the flab layers harboring bacteria. My neighbor has this problem.

I feel like you should update the poll now that Scott and Morgan can’t be nominated by America.

Mark give Simon and Dawg a break. They had 99 days of Big Brother 18, one week off and now they are doing BB OTT. They are doing a great job. People should know not to vote for Scott and Morgan as a 3rd nom.

Since I can’t vote Scott or Morgan, I think I might vote Shelby then

Kryssie is so disgusting…. Does not so burping and it’s loud. Get some manners. At least day excuse me.

if she wasn’t constantly grazing all day long like a cow with 4 stomachs, she wouldn’t belch so much. The methane coming out of her mouth must be foul, (yes humans and animals belch methane). good thing she doesn’t smoke or she blow up when she sparks up a smoke.

There was a point where I liked the LNJ but that is gone now except for Justin. The rest of them are just disgusting people, especially Kryssie, cant take her at all. I like the ball smashers and Justin. Alex is my fav. She is a good person. A nice lady who is playing hard. Neeley will get my vote as I want the ball smashers to have there best opportunity to survive this week. Neeley going home on Kryssie’s watch would be epic.

I’m just glad that Whitney has more votes than Justin in the poll for America’s Nominee. Like I know she won’t be it, but at least she is not the person with the least amount of votes.

passes the sniff test! Kryssie’s? not so much.