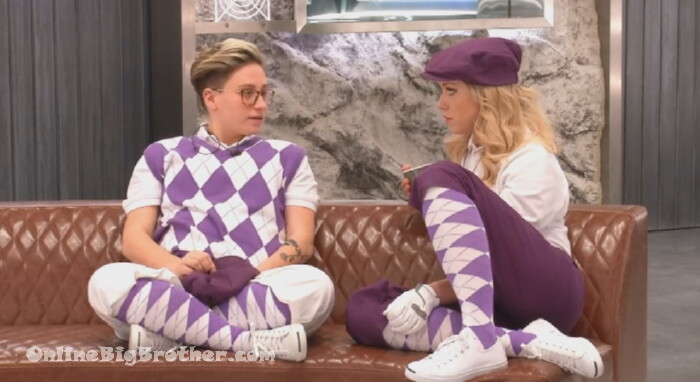 Big Brother Canada Spoilers Laura was evicted 11-0. Dane is the Head of Household.

Chelsea and Kyra
Kyra says she doesn’t want her to fight for them.
Chelsea – of course you do that’s what a ride or die does
Kyra – no but I don’t want you to because I’ve tarnished my name and I don’t want you to get dragged down with me.. let me do it for myself.
Chelsea – Kailyn is just really good at deflection
Kyra – she is manipulating them so much
Chel – she’s doing a real good job
CHel – it’s not really you f*ed up you just gave information to the wrong person
Kyra – I didn’t even give that much information he was the one that first started.,. I think he was trying to see where my head was at and I took that As I could trust him but instead he was manipulating and I underestimated that .
Chel – we’re all learning right.. I’m learning that I’m WAY less an emotional player than I’m going to be
Kyra says they’ve been keeping it together since “then” she hasn’t talked game “at all”
Kyra – I don’t want you to think you can’t trust me like honestly my hormones that and like everything just f*ed with me and ..
Chel – I guess when I heard that .. I was like..
Kyra says she swears on her life that she never said “those words” she said I want you in this house you deserve to win 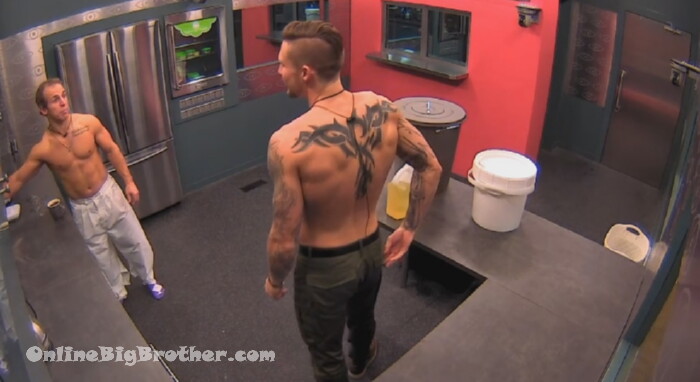 Adam and Dane
Talking about how Dane is going to put Adam on slop to confuse people. 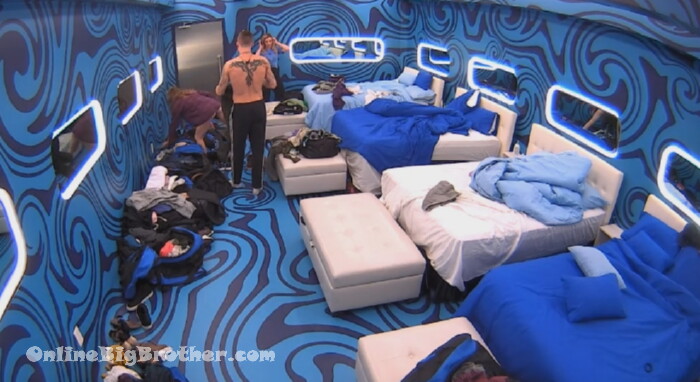 Adam, Sam, and Chelsea
Adam says Dane likes Momma K (Kailyn)
Chelsea – she’s very sneaky
Adam – doesn’t matter they’re solidi with us.. she’s not going to turn us against us
Chel – long term be aware..
Sam – she’s very good with twisting..
Chel asks them what they think of the “new chick” They start calling bullshit on Cory saying she’s 29.
Chel – why do people think 29 is a passable age.. that’s ridiculous.. 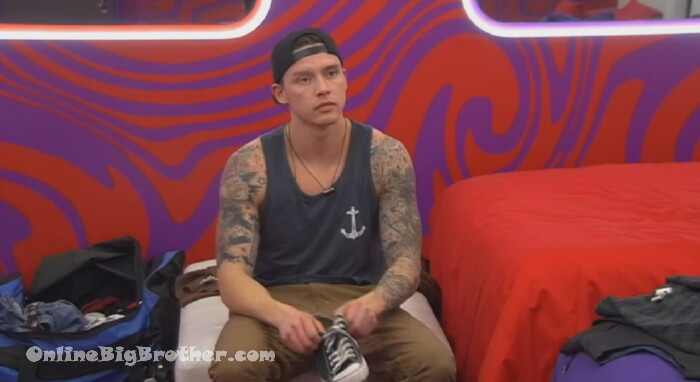 Damian and Kyra
Kyra- people want me out..
Damian – Yeah Straight up.. Dane wants to hear what everybody has to say.. Do your thing do the best you can
Damian says he was about to go home during Adam’s HOH but than “Laura F*ED up” tells Kyra they should hold back and see if someone else messes up their game.
Kyra – everybody wants me out.. Hope for the best happy face.. 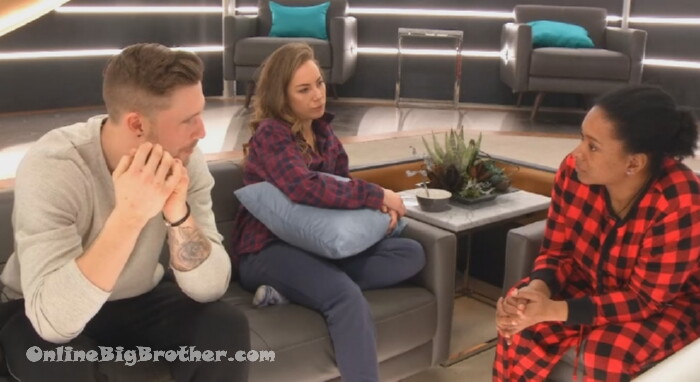 Adam, Sam and Momma K
Speculating that Cory was able to watch them on the feeds before coming into the house. 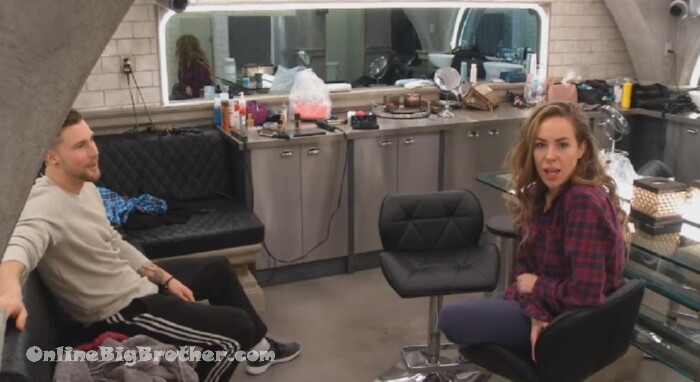 Adam telling Sam that Mark really likes her more people are noticing.
Sam says that she doesn’t like Mark.
Adam mentions that every time he see them mark is hanging over her and in her neck or she’s playing with Mark’s hair.
Sam says that Mark is playing into it a little bit, “to test this… ”
Dane joins them start saying F** F** F** F*** …
They start speculating about the Cory.. 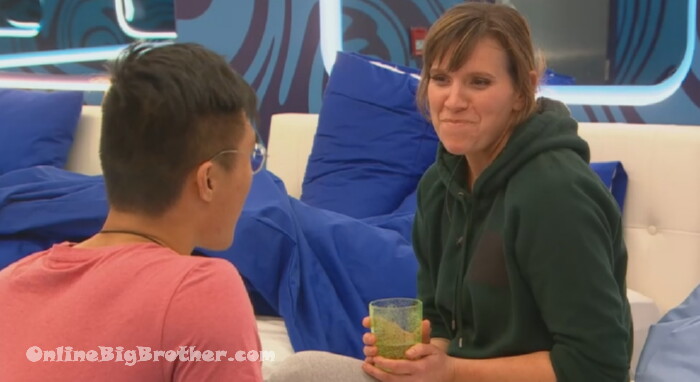 Eddie and Cory
Eddie talking about his parents being the Bravest people
Eddie says his parents sacrificed themselves for him. “we’re comfortable in China our economic situation is comfortable.. ” Goes on to explains that the exchange rate for his tuition is very high and is a huge expense for his family.
Eddie says he’s very grateful for his parents for paying his tuition “I want to make them proud”
Eddie says Cory is very easy to talk to and he likes talking to her.
Cory says she likes Eddie’s Aura
Eddie – I like your Aura too.. you’re so likable.. and you are so glamorous when you walk in .. when you were on the big screen I was like OHH I’m rooting for that girl …
Eddie goes on to tell her she looks very quirky he likes the quirkiness all calls her Wholesome 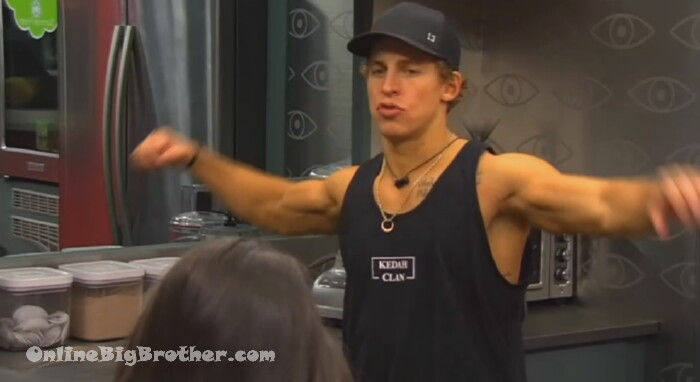 Dane and Estefania
Dane says there’s going to be a lot of people spinning things
Dane says he’s not putting up Eddie “I love Eddie.. ”
Kiera comes in .. The girls mention that Chelsea obviously dropped out of the HOH
Dane – she was literally solid during the practice.
They continue to about the competition Dane says there was two people he didn’t want to win was Kyra and Maki. During the HOH they were “Solid”
Estefania – I was getting nervous.. 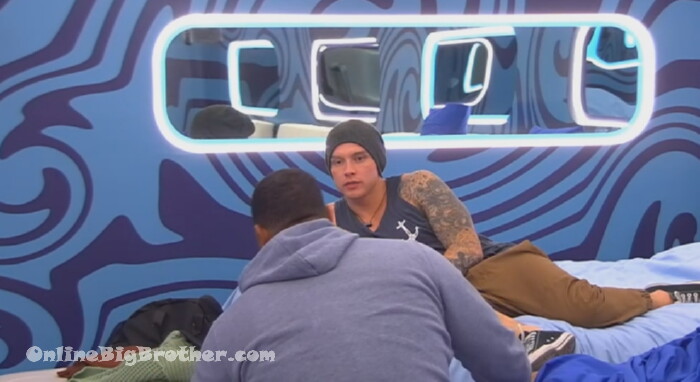 Damien and Anthony
Talking about it being all about finding people that are “real” and riding it out with these “real People ”
Damien says the reason he got nominated was he saw how fake everyone was with Adam so he thought that maybe Adam would see through that and Damien would see him when the time is right.

am i getting this right? so out of 14… 9 of them are possibly in a superalliance that seems to be the core 4 guy alliance along with five women: sam and chelsea brought in through adam presumably, with keira and estefania being closer to dane, and kailyn being kept close for now. but the keira stef side seems to want to target adam and sam. what?
realistically, this means that the only viable final 2 deals cory would have a strategic chance in getting would be eddie (which she got), damien, kyra, and maki (so make deals with the house targets, that’ll make friends and influence people). making final 2’s with anyone else in a 24 hour period would mean the whole crew would know in minutes.
i get the feeling the brolliance is going to go the way of five hours in the hammock by week 4. i half expected sam to be on dane saying too many teeth on a guy are a turnoff once he won hoh. i fully expect chelsea to keep feeding doubt seeds to adam about sam and mark (to keep them apart, and to hide chelsea’s pre-existing tie to mark). it’s my impression both want to be the alpha female of brotown.
strange moments that could show alliance or relationship building last week:
kyra took the place of laura in the sam and chelsea with friend alliance. and barring a veto, will probably go the way of laura.
keira and mark have some sort of tie. dane wants more of a tie with keira in a showmance way.
nobody buys that kailyn is 29. she seems to have a tie to eddie. i don’t think sam and chelsea like her much.
of course we missed a house meeting before feeds came on. this is why we can’t have nice things. what’s the point in having a nominee call a house meeting on eviction day if we don’t get to see the whole crash and burn.

So how is everyone liking the season so far?

I don’t see much discussion which is kinda sad.

So far this Season looks like a blast. I plan on watching the Live Feeds every chance I get. There is some delusional Ego’s in that house together !!! I can’t wait until BB mixes in some alcohol after they all have been pent up for a while.