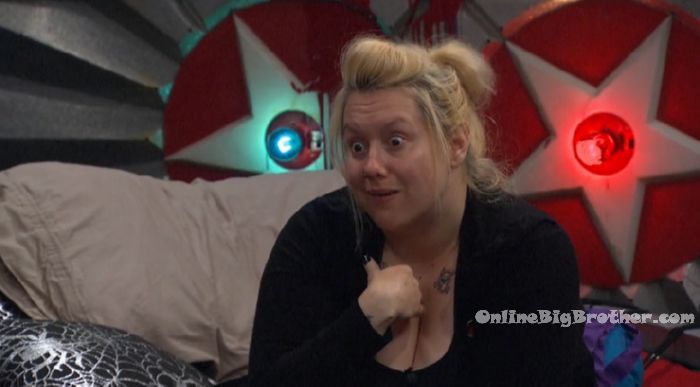 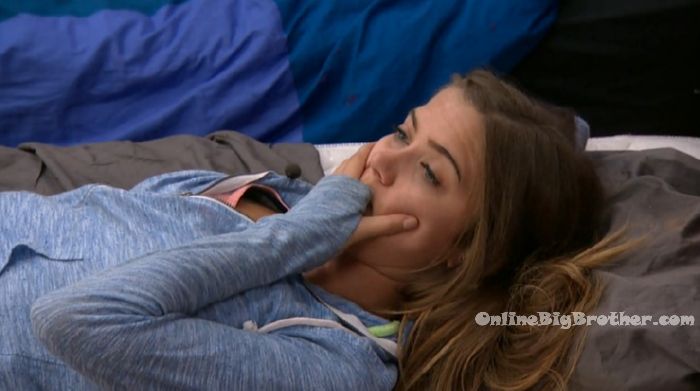 8:30pm Shelby and Alex are laying in bed talking. Shelby – So what do I do just put on a happy face when he (Scott) asks us to be in an alliance? Alex – I think its best we just keep doing what we’re doing with Scott because he might be .. you know doing his thing but at the end of the day he is putting you and me in front of everyone else. Shelby – but would you want to be in an alliance with someone who obviously, blatantly puts you above me? Its just very awkward. Alex – it is awkward and he is basically screwing himself when he is like hey here’s my hierarchy of the alliance but lets all be loyal together. That’s big brother 101, you don’t do that. He has basically screwed up his game a little by doing that. Shelby – he just needs to stop saying that and stop having conversations on that hammock because he doesn’t know how to have a conversation. If he’s watched this game he should know someone is going to get pissed if you say yeah I’ll vote you out. Alex – I don’t know why he said that. I don’t get the logic behind it. Shelby – and he brought it up to me again! Alex – we know now he has this hierarchy thing …we can’t do anything about it this week but we can use it in the future. 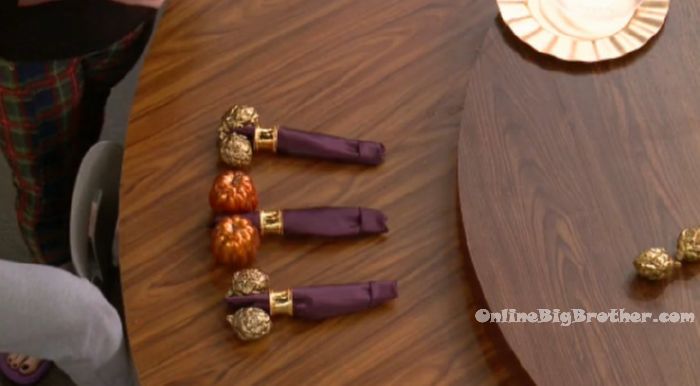 10:45pm Ball Smashers – (Morgan, Alex, Whitney) Alex to America – we need your help. Whitney – we need a signal. They chant – USA WE WANT TO STAY! PUT SOMEONE US THAT’S REALLY GOING TO SUCK! Morgan – that was really good, we’ll have to teach Shelby it. Whitney – we didn’t smash any balls last week, but this week we’re going to! Alex to America – do you a strong all girls alliance to win? Morgan – there are balls left to be smashed. We need them up! Whitney – 6 balls left to be smashed. Alex – and we need your help to get two of them. Whitney, Morgan and Alex – we need your help. Justin joins them. 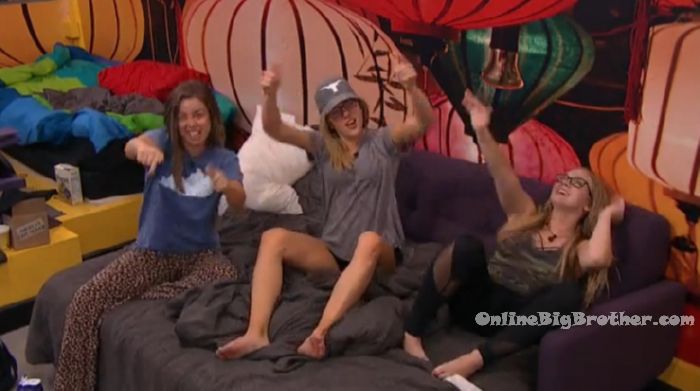 11:20pm Whitney and Justin talk about who they think America might nominate. Whitney – I’m just going to try and win the veto tomorrow. Justin – if I win it I would take you down and put Morgan up there. Whitney – but what if Jason is America’s nom? I don’t think it will be Jason. Justin – I don’t think so either. It will be Scott or someone else like Alex. Whitney – it just sucks because I know you and Kryssie aren’t even going to have a vote this week (Shelby’s care package can cancel out 3 votes.) Whitney – Scott is going to vote me out over Shelby or Alex. 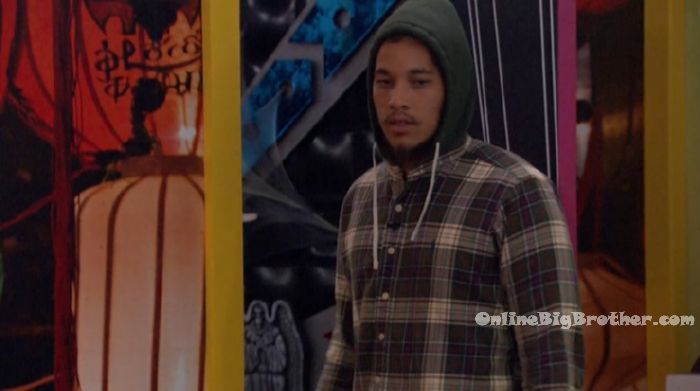 11:25pm – 3am Havenot room – Justin tells Kryssie – I’ve been in Whitney’s ear so that later down the road she might ditch them. She is extremely loyal. She is someone we could work with. Whitney joins them. Kryssie – last night I was under the impression she was nominating Morgan and Kryssie – if for some reason you can’t come down. .. someone has to convince Shelby to not eliminate Justin’s vote. I realize that will be really difficult. Whitney – I don’t even think Shelby is going to think about anything and just leave it up to Scott. And Scott will vote me out of here before he will vote Shelby out. Kryssie – he is only protecting Alex. Whitney – I think she (Danielle) is threatened by me because I have relationships with people. Kryssie – they need to put up Alex or Scott. I hope they put up Scott because he has less chance of winning. Justin – I don’t want them to put up Scott. Kryssie – I want them to put up anyone but me. Kryssie – Shelby, Alex and Morgan all gave Danielle the exact same speech. They gave me the same bullsh*t too… the only one that didn’t is this one (Whitney). Justin – whatever happens this week .. is what it is. Jason joins them. Kryssie – I’ve extended trust to every a$$hole in this house and literally every a$$hole in this house has sh*t in my mouth! Jason – I didn’t quit my job for a second time for Scott and Alex to prance around this house and run sh*t. Over my dead body! Justin – we need a name. Kryssie – not if we can’t save one of our own. We need to win the veto first. Jason – they have their entire group brainwashed and the only person that isn’t .. they want out. 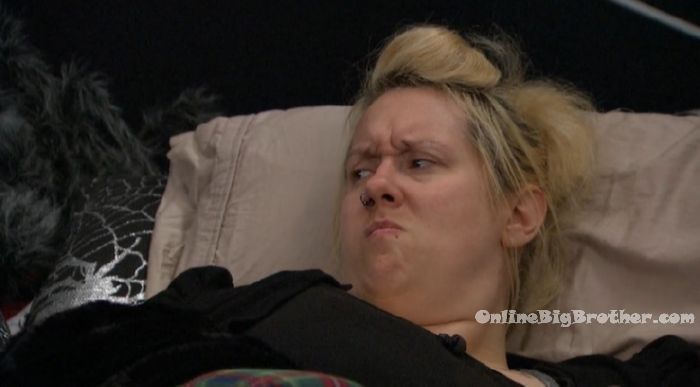 3:10am All the house guests are sleeping..

Show your appreciation by making a donation!

Well, it looks like the make nice ploy by the LNC is fading. Kryssie complaining about trust now. She has given no one from the BS+Scott side any reason to trust her. The one time she could have instilled some level of trust was with Morgan. When Kryssie was HOH, she promised Morgan safety but yet put her on the block. Jason complaining about quitting his day job for a 2nd time and whining that he is not winning. Nothing is guaranteed in BB Jason. You of all people in this season should know that. Even though Kryssie is expecting to be America’s Nom, betting she will go off the deep end after Veto today when she is still on the block.

Whoever keeps putting this is right! Morgan looks so much like me!

Kryssy leading the jokers poll to be 3rd nom by a decent amount. 43% for Scott as 3rd nom and it is 48% for Kryssy as 3rd nom and has been increasing. If you only count votes for Scott and Krissy to make it a head to head vote and exclude the other 4 house guests, it is Scott with 47% and Krissy with 53% to be nominated. Over 12000 vote sample size.

Well…so much for that. Lol

Kryssie always has this look like a bug crawled up her butt on the way to the outhouse!

I’m all for getting Kryssie out this week BUT based on how Whitney is at the bottom of the BS/Scott totem poll I’m suddenly less opposed to seeing one of them go should Plan A go awry.

Willow
Reply to  Whitney For Champ

I agree and disagree with ya. After I found out Shelby won the CP, I started thinking now would be a good time to take a swing at Jason for America’s nom. I don’t want to lose a BS but in the event one does leave, I’d prefer it to be Whitney(that’s where we disagree). Since I don’t mind Whitney leaving I thought that if she was nominated by Danielle, America should nom Jason. This way if plan A fails, it’s no biggy, Whitney goes home. If Whitney wasn’t one of Danielle’s nominees, then I’d say put up Kryssie for America’s nom and she goes home. The BS+Scott will eventually lose some members, so I wouldn’t mind seeing Whiney leave. She’s at the bottom of my list. I think it’s just a matter of time before she turns on them anyhow!! Justin has her ear and that’s not good.
Alex and Shelby were talking about Scott’s hierarchy…..What’s yours???
Here’s mine:
1. Alex
2. Scott
3. Shelby
4. Morgan
5. Whitney
6. Justin(Could be Danielle though if she starts playing with Alex/Scott)
7. Danielle
8. Jason
9. Kryssie

LOL! That is so so true though. She did make deals with people that broke the deal down the road. But she should also realized that she was never in real danger… up until now. And, honestly, had her had a more upbeat approach and reaction to everything that is going on in the house – i.e. sportsmanship – she would be in a different place with everyone. It’s her crassness and debbie downer attitude that makes her an unwanted presence. Best example is when she won HOH: Scott when up to congratulate and hug her and she kinda flinched. That’s not nice. She forgets that is all a big game and they are the poker cards and the players at the same time. The way she reacted to Scott was like as if he had killed someone in her family. Ridiculous. She has poor judgement and is purely a reactor. For that reason, I truly hope she – or any of her friends – doesn’t win veto today. She needs to be evicted ASAP.

Paranoia running rampant in the HN room! Love it

I wanna know what people gonna say about Whitney calling Dani a slut, that’s name calling too… But I can hear it now, they (LNJ) have said much worse…. Only person I like in this house is Justin and that’s cause dude is funny…

A.K.A. Monica Lewinsky
Seriously though, the resemblance is at a super parallel.

So far the comments have been civil…
I can’t wait to see what Anonymous and Amy have to say.
Where the hell has Stephanie been?

all the stupid BS fans out there just want to make this show boring and hand the girls the game on a silver platter. what are you all going to do when you have eliminated all the other side of the house? watch a bunch of dull ass girls sit around with sulky looks on their face, playing with their hair, refusing to clean, and refusing to have any interesting conversation? they literally lay on a bed/couch/hammock and sulk all day long….that should make for super entertaining feeds. one of those girls needs to go this week if you want to keep this game at all entertaining, but it seems like none of you bs fans care about entertainment. the rat king, alex and morgan can just sleep their way to f3 at this rate because america is doing all the heavy lifting for them. their social games don’t need to even exist – and guess what, they don’t. this is going to wind up being a horrible season if america keeps going with this one sided bs crap.

Guess the poll here had to be wrong one time………Who are the girls gonna pick if the noms stay the same?? My gut feeling is Whitney……