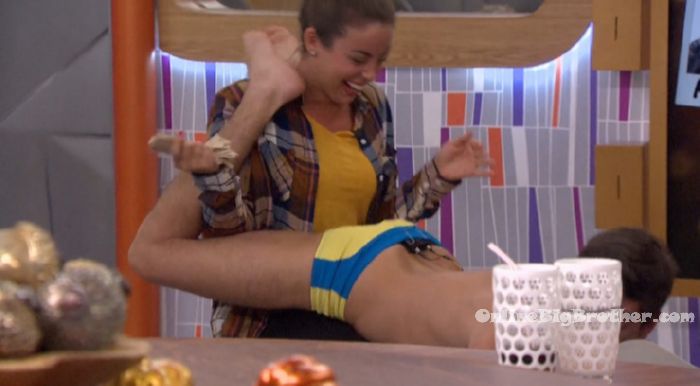 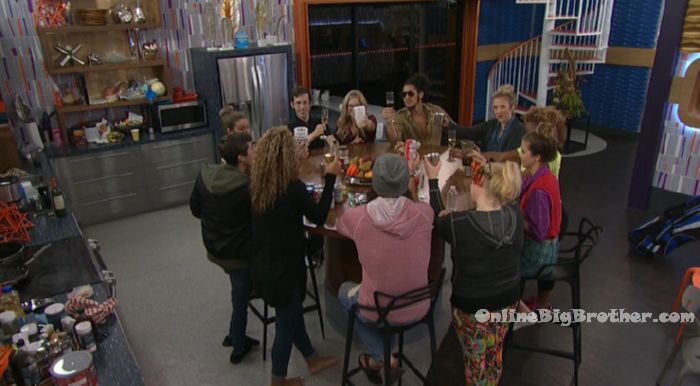 9:20pm – 10:30pm The house guests are hanging out in the kitchen talking about how they didn’t get the stuff to make a cake for Whitney’s birthday. Jason goes to the storage room and finds 2 bottles of wine and some beer. Jason – Happy Birthday Whitney! I knew I heard them in the storage room. Good job Big Brother, I don’t have to snatch your wig! They ration out the alcohol. Jason – thanks for Whitney being born. They cheers to it being Whitney’s birthday. Someone says the beer tastes like piss. Jason – I pissed in someone’s beer at a party one time. They drank that 40oz. We were trying to get just one guy to drink it but he shared it with his girlfriend and some other girl …. so sorry y’all can drink all three peoples pee that was in that 40.

Whitney and Neeley droppin’ it low… 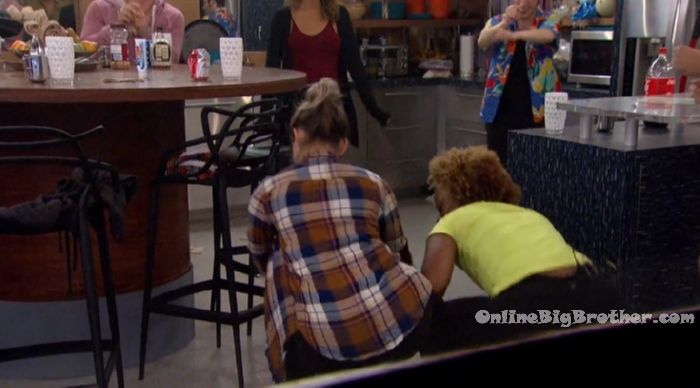 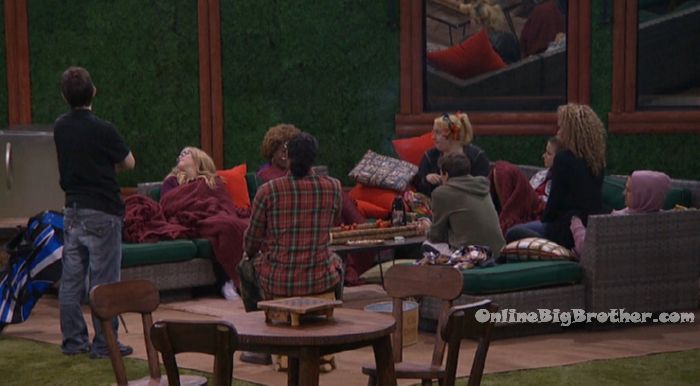 12:10pm The birthday girl (Whitney) heads to bed. Kryssie and Neeley are alone. Kryssie – I think after tonight Scott isn’t going to put up any of his friends up. Its going to me, Shane or Danielle up. Neeley – well I’m going to try and work it. I can’t promise… I can just try to promise you. Kryssie – no offense to Danielle and Shane but I’m here for me.. so if you bargain for me.. Neeley – I’m going to be honest she (Danielle) was getting on my nerves today. Kryssie – I have concerns with how petty she’s being… in front of everyone. Neeley – she’s getting on my nerves really bad. I just don’t like how every time someone has an issue …its just got to come back. Girl, it don’t always have to come back to you. People can have their moment. Everyone can have their moment. You’re gorgeous .. no one will ever take that away from you. I want her to do well, I want her to succeed but I just can’t. I don’t like when no one else can shine. This is Whitney’s night.. no one elses. Kryssie – but we need her this week. Neeley – I’ll see what we can do. 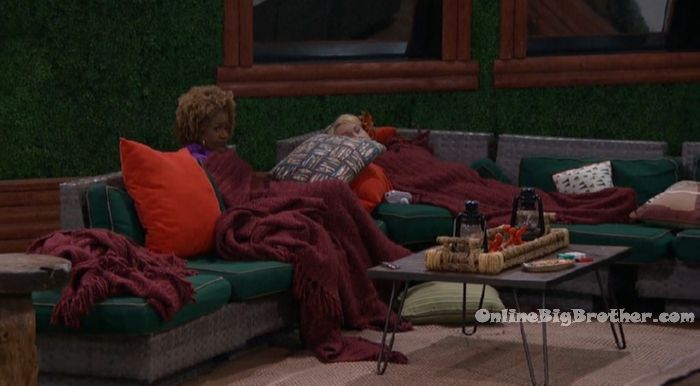 12:25am Jason, Kryssie, Neeley. Jason – Scott is fighting against America’s nominee.. that’s why he wants to use the double (veto) because he thinks you move one of you from the block and you remove America’s (nominee). Danielle joins them. Danielle – he told me he is going to put up Neeley and Kryssie and then try to back door me. Jason – he isn’t trying to backdoor you. He’s trying to backdoor Shane. Kryssie – that’s f**king horrible. Danielle – he better hope I don’t get picked to play in the veto. Kryssie – so he’s going to take America’s nom and Neeley down .. leaving me and Shane up there. Danielle – he better pray we don’t win veto. America’s nom cannot come off. Jason – he’s seen that we have the power to eliminate America’s nom that’s why he wants them off. Justin joins them. Danielle heads inside. They talk about how Scott definitely wants Shane out. Jason – its better he’s aiming at them (Danielle/Shane) than us. Its better we lose Shane or Danielle than one of us four (Kryssie, Neeley, Justin, Jason).

1:35am HOH room – Scott tells Neeley – First I have to apologize that I have pull the deal that I offered you off the table because of this America’s care package. I think you will be upset with the noms I choose but I am planning to choose the double veto. Its obvious that Shane turned his back on me and Monte. I came here to make deals / not break deals and its obvious that’s what Shane is doing. (Scott is breaking a deal while saying that’s why he wants Shane out. LOL) I know I did offer you the deal and unfortunately because of this particular .. instead of targeting him (Shane) directly I need to put up two pawns to do a backdoor strategy. Neeley – okay, well I appreciate you telling me that. Scott – absolutely, I want to be 100% straight up with you. Scott – my mindset a couple days ago was to target him directly but with this care package it makes a lot more sense for me to do a backdoor strategy. Neeley – okay, okay. Scott – I’m not here to fish any information from you. Neeley – I am really loyal to Kryssie and if I have to choose, I’m going to choose her. Scott the end result is the same as what I wanted a few days ago.. its just the tactics on how I get there. 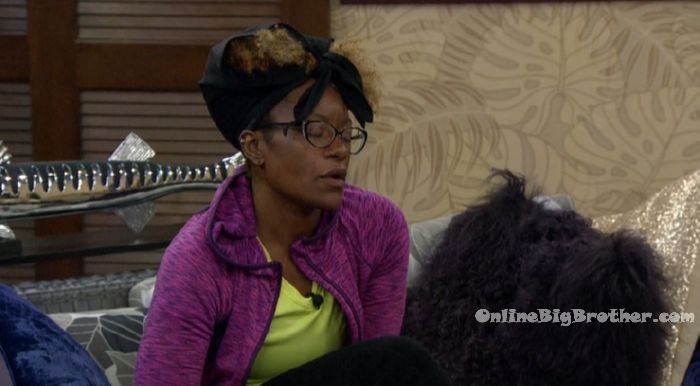 2:05am Shane, Danielle, Kryssiea and Jason are talking about Scott wanting Shane out. Danielle if it comes down to that we should definitely convince him (Scott) to breakup the showmance.. so that he will leave America’s nom up. Jason – yeah I’ll be like I’ll vote out Shane. Tell him whatever he wants to hear. The only people you’re really loyal to are the people you’re playing for at home. If you don’t want to lie, you’re in the wrong game. 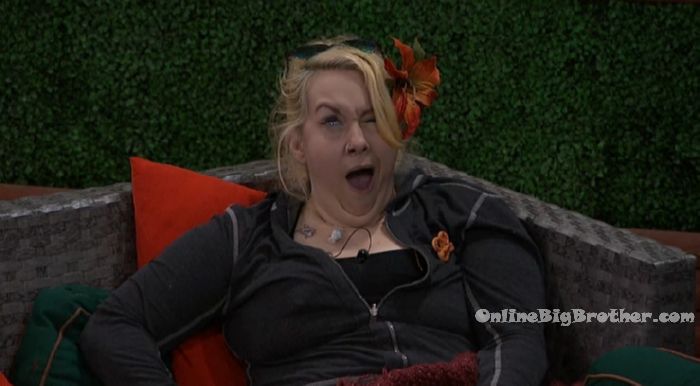 3:15am All the house guests are sleeping..

I SO wanna see the look of shock on Danielle’s face when she realizes that she’s America’s Nominee. Let’s make it happen, y’all!

Yet Another Hillary Lie
Reply to  Oh Please..

That would be great.

Hopefully the idiots on twitter don’t ruin it, they seem to be pro LNC on there for some reason.

I can’t wait to see the look on their faces when America nominates Danielle/Kryssie. The only ones from that side I like right now are Justin and Neeley.

I just hope after we nominate Kryssie or Danielle, that the Plastics+Scott don’t become as cocky as the other side did in the last two weeks.

Are Shane and Danielle a cute couple? YES
Do they genuinely seem to like each other? YES
Does that mean I want to see them in the house for the next 7-8 weeks? NO

I saw a clip Paul retweeted today that was showing Danielle and Shane laying together cuddling, then production switches the cam to show the message board that Paul, Nicole, and James wrote to the OTT houseguest. One of Paul’s messages was “F**k showmances” and bb zoomed in on his showmance message. Lol.

To be honest, I know I don’t have a popular opinion, but I’d rather see Danielle stay over Shane. As annoying as she is, she causes more drama and she has actually played the game. I mean let’s not forget, she’s the one who caused all of the fights last week and she’s the one who flipped the vote week 1. I’d rather see her stay and fight over Shane.

Truth
Reply to  D VS S

Would it be possible to get a poll?

What type of poll y’all want?

Mdc
Reply to  D VS S

I completely agree with you! I hope she wins veto and I hope Neely wins veto and they backdoor Shane!
Danielle is self centered but I don’t care about that, I care about her game play, she was strategic in the veto comp whereas shane and montes go big or go home attitude isn’t smart in big brother! So I like Danielle slow calculated moves. And she is tighter with Jason and Justin.
If shane stays I don’t know who he would align with

Nodding
Reply to  D VS S

I can see your point, DVS. Each season it seems that we rejoice every time one of loud and obnoxious, or overly dramatic, or hyper-sensitive players that we love to hate, get the boot. Then we bitch and moan for the rest of the season about how boring all the remaining HGs are. Just sayin…

It would be really funny to nominate Danielle since the LNC are so cocky. Especially them talking bout leaving the AN up, and voting them out. As long as Danielle or Shane leave I’m here for it.

I love how they’re all assuming that a ballsmasher will be America’s nominee. It hasn’t occured to them that we’re targetting individuals not a particular side of the house. The two least liked houseguests just happened to be on the ballsmashers side. lol.

So I voted for shane in the poll and there’s only a small 2% I’m really happy Neely and Whitney have 0%
But I’m kind of upset that Alex has 4% she’s playing really well and even if you support the late night crew she never wanted to target all of them, just the showmance which is smart game play! I want her in the game for a long time

I really do think we have to knock down Jason’s side of the house a couple pegs. I really think as we have a major say in what happens, we should control what power moves occur and who moves foward in the game.

It looks like Dani, Kryssie and Shelby will be HN today, yay!

1:03pm Alex, Danielle and Shelby are have nots

I was hoping for Kyrssie to be a have not. She needs to be taken down a notch!

Right, after the meeting kryssie and Neeley were saying see America loves us. Thats why we need Danielle this week and Kryssie next week. Come on America lets knock them off their pedestal nominate them for America nomination.

She said that just proves America loves us. No Kyrssie you just chose the right person to be aligned with. According to Jokers poll all of the other side is ranked higher than the LNC except for Justin.

I totally understand Danielle, but why shelby, and Alex?? I just hope America still nominates Danielle.

Because Shelby’s a tw@twaffle. I don’t understand Alex either. Should have been Kryssie.

I think it may have to do with Alex making some comment about how they’re running things (Talking about her side). I’m not sure what she said exactly, that’s just what people were saying on the feeds.

Alex was talking bout Danielle is running the game. If they nominate Morgan or Alex that’s just plain stupid. How are they running the game, they have already lost 2 of their own. We need to get rid of someone from LNC

Maybe brcause they won 3 HOH in a row?

It looks like Morgan’s and Dani’s names are being thrown out there for Amercias nom. Really, why Morgan?

All I saw on feeds was Morgan, and Alex. I saw a couple dani’s here and there. I guess Twitter is saying Morgan.

Why is Kryssie crying? She needs to go home!

Kyrssie is flipping out because the girls went through her dirty clothing drawer to look for the Krackles. It was all fun and games when they looked through the girls drawers and when Jason and Shane rubbed their dirty armpits all over the girls pillows, put their stinking dirty feet in Morgan’s shoes and stretched out their sweaters. I can’t believe America or rather Jason’s fans are keeping her and Danielle safe! And Neeley is not so innocent either calling Alex a heifer!! I hope they go before any of the ball smashers go! And I hope they are the 3rd nom and get Americas vote this way they know they are not as loved as they think they are.

LNC is so disrespectful not to even come out of the room for safety ceremony. So immature but America keeps voting their way, so unfair