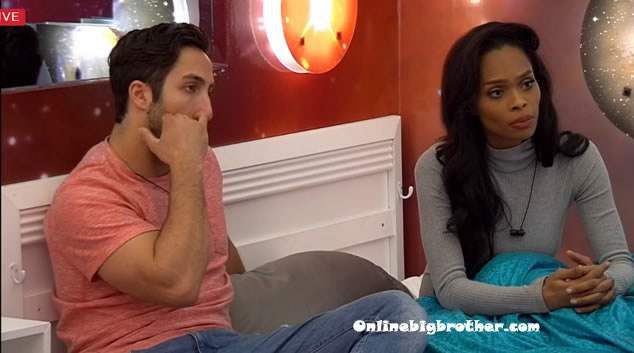 Watch the feeds for free from the US using a VPN. We recommend HMA https://www.hidemyass.com/vpn/r16399/

10:34pm Ika, Demetres and Dre
Defending their actions when they were with the 6 alliance.
Ika says she only wanted to keep Dre safe. Adds that all along it was the three of them.
Ika – in this game my care for you f***d me in my alliance.
Iak goes on about how she protected Dre.
Dre says thank you for protecting her she wants to play solo. Dre doesn’t want to be carried in the game.
Dre tells her she has done sneaky things in this game and when people do it to her she freaks out.
Ika – Kevin made the best move for his game..
Dre – he did
Ika – I’ll go out for the team.. I’ll leave the f***G house. to do that I’ll ensure people evict me for being a f***g b1tch

Ika says she feels like she screwed Demetres game up.
Demetres says he trusted Dre more than anyone else in the game other than Ika.
Ika says that Demetres didn’t know about the alliance of the vets either. (LOL)
Ika – I’m not some master manipulator..
Dre says she doesn’t get how Ika is saying that she screwed up Demetres game.
Ika storms out
Demetres to Dre “She really does have your back”
Dre – I don’t understand any of this.. I want to play by myself. 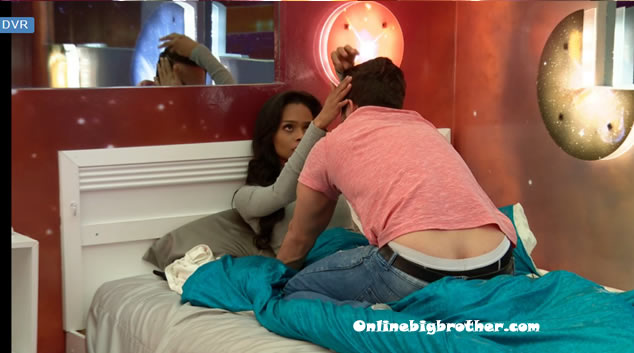 10:42pm Demetres and Ika in the red room
Demetres tells her the only person that would have put them up is the person that won the HOH. adds that you have to be lucky in this game.
Demetres – I look around and all I see is people that will put me up.. I look around and I can’t get them out fast enough
Demetres wonders how he can get the house to turn on themselves.
Ika says they should just leave them all alone.
Ika says she wishes she would stay to watch them dig their own graves and when they dig it deep enough kick the dirt over them.

11:05pm Dre and William Bathroom
Dre starts to retell her chat with Ika and Demetres. Karen comes in to do laundry and Dillon comes in to take a shower. they Switch to French.

he should backdoor ika

just remember the way played last time triple night eviction kecin so screwed over not in less he get pov!plus bb canada really scrwed secret veto not in less there another 1 in the house

IKa Lost her mojo & is going down hilll!!! She’s starting to look really unclassy fuck all these people WILLIAM FOR THE WiN !!!!

not in less she pov watchout all it take 1 pov!look how sarah h played lost steam picked up won it

lol frodo can you please edit your posts before you click submit. Like just take a couple seconds to look it over…

Ika is a soar loser obviously they had to know Kevin would put them up they were never working with Kevin after the whole entire game why would they start working with Kevin now duhhh i’m times I wonder about these people in this game it’s always changing you can’t be on top all the time ika played a one sided game the line was drawn with her from the very beginning and now she has to take that line to the End! Even if Dimitrie wins veto cuz ika won’t because she can’t win nothing apparently they all want ika to go & demetrie is her shield but he needs to save himself & i hope he wins cuz he fought hard & is a beast!!! He is the least liked houseguest for some reason I think it’s because he doesn’t really give much of himself to people he’s not really emotionally available to anyone but Ika & The houseguests have all mention that they have a hard time connecting with him so it’s a good thing that he can win competitions because he’s not winning them over in any other way. Was nice watching u this season Ika but ur time has come!!!!

not in less he win poc everthing stays the same

Ika wins all the “nothings”, she can not win “anything”…
Ika still my fav
Its not over till all the Kraken is gone (‘,)

Dillon has the best personality

Ika is suchhh a soar loser & she has to go now!!! Shes is attacking people individually it’s not right she is bullying everyone and it’s only going to make everyone hate her even more she’s isolating herself & really digging a bad hole for herself!! She never even one any competitions if it wasn’t for Dimitrie being her shield she wouldn’t even be there it’s funny how the tables turn I thought she was on top of her game but now she showing some really weak sides to herself it’s like Old Ika has returned, well at least she went further this time but still she did this to herself she isolated herself the whole entire game with Dimitri and she said it herself fuck this house fuck these people I don’t like any of them and now she can’t handle her own medicine she should have chosen her words more tenderly because now she’s eating them and they’re hard. Ika is gonna Ika tho so be it Girl Bye !!!!

Chances are Dimitrie will win the power of veto take himself down off the block and no matter who the replacement nominee they are just a pawn Since Queen Ika turned herself into a peasant & sabotaged her game so she will be kicked off nobody likes her anymore and she’s attacking people so now they can’t wait for her to leave!!!! From hero to zero just like that IKA is IkaFried & all out of shields!! I say William Dre Dillon & Dimetre final 4 Kevin will be the next target still don’t understand why William saved him he should’ve used that Veto towards the end this game is very unpredictable at this point as a matter fact the whole game it was unpredictable but that’s what kept me on the edge so either way I love this game & overall this season was great!!!!!!

It was only good for that week.

For all of you who don’t speak french. Allow me to translate. Dre called William the Pilar this season of big brother. She reminds William to not trust Kevin as he does not love her just like he did not love Pilar.

kevin fucked himself and my interest in this game. All he had to do was rat out dre and put up any combination of dillion, karen, or jackie and one of them would have gone home. Leaving the rest of the house to go after ika and demetri the next week, or ika and demetri going after will and dre, while keeping himself safe until he could play in the following hoh. As it is, either demetri or ika goes this week and the following eviction kevin and demetri are on the block and depending on who wins veto one or the other will leave. If kevin survives that, he’ll be gone the following eviction. So, next thursday. Worst final 5 (karen, dillion, will, dre, jackie) in BB history.

Ika is such a lying b#%^ch! She says the deal for Kevin and Dem to work together after she leaves is all Kevin’s idea. Argh! I hate that b#%tch!!

Dre come on what lameness is this? I want to play the game as an individual? After you’ve won nothing and others have kept you safe?

Ika’s family must be thrilled that she’s throwing away her game for a guy that she’s known 2 months.

It would be hilarious if Dem won veto and she realizes that she blew any chance of both of them staying because she decided to be, in her words, “a f-ing bitch” to be voted out. But really, I’ve already had enough of Demika to want to see that. Hope both are still on the block on Thursday and leave in the triple eviction.

This is a “next level” player? lol

kevin will want (and does want) ika to stay to act as a bigger target.. so as much as ika’s trying to be a target to be evicted in order to save demetres, she’s inadvertently doing the opposite :(