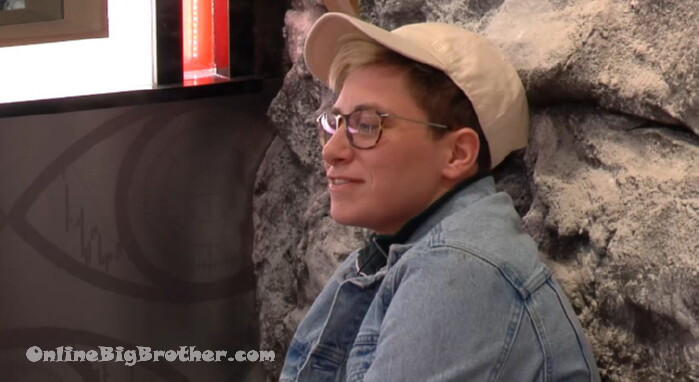 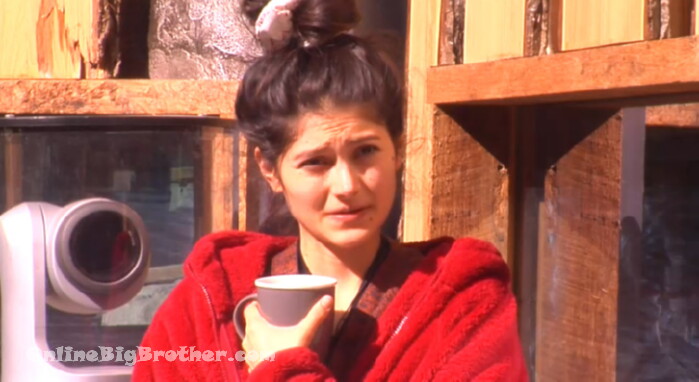 11:00am Esti and Dane CAm-1
Dane – F***
Dane – Damien’s name has been tossed around..
Esti – I think .. it depends on the competition
Esti wants them to wait to see what the competition is they should win the one that is tailored for them.
Esti – it’s so weird that people think he is a floater and he needs to leave but he’s such a loyal dude
Dane – ya I dunno at least we’re safe this week..
Dane – it would be nice if me, you, KIKI or damien win something next week.
Esti – we don’t want to keep losing numbers each week.. If we would to wait to take a shot until to long we won’t have the votes.
Dane says getting Sam out is getting a number out on the other side. 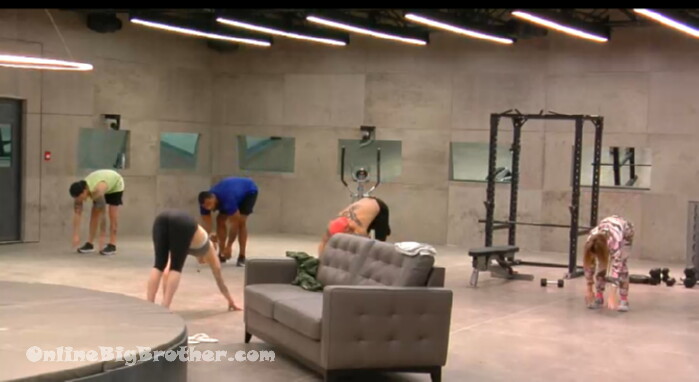 12:40pm Kyra and Chelsea HOH Cam 3-4
Kyra – KIKI is being so weird with me
Kyra – I jokingly went to kiss her and she’s just been really weird ever since.. She just needs to man up and kiss someone and stop being so paranoid about it
Kyra – everyone needs to kiss me .. so after that she’s just been really weird.
Kyra – I don’t think she’s ever had s$x
Kyra snickers..
Cheslea – no don’t .. .. don’t say that
Kyra – she’s been weird to me.. Esti and Dan have been talking a lotta game this morning.. 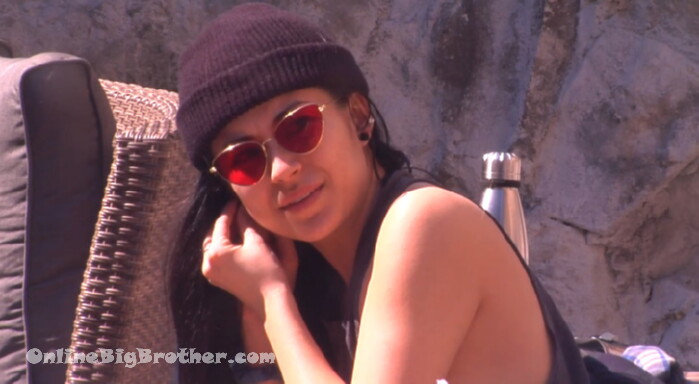 12:56pm KIKI and Dane cam3
Dane – can’t wait to take shot
KIKI – oh my god I was just going to say that..
KIKI says she really wants to win the HOH
Dane – I would love you or esti to win so bad..
Dane is certain that a double is coming up so hopefully mark has their back because he’s getting good at thee questions.
Dane brings up that he told Mark that Chelsea is throwing their names out as targets
Dane says KIKI needs to be comfortable with Mark because they need him for the double
KIKI – i’m trying to be comfortable with him ..
KIKI says Mark is shady mentions how different things feel when they talk to Mark over DAne and Damien. Mark doesn’t want to say much.
Dane – he’s keeping his cards close.. Like I said he’s going to win the double he’s really smart man..
They talk about how amazing it would be to get rid of “two of them”
KIKI – Kyra was in the morning like HEY
Kyra now joins them. They try on KIKI’s sunglasses. Dane tells her how trippy they are they make everything look pink. KIKI goes on about Smoking a “little” and heading to the beach wearing those sunglasses. 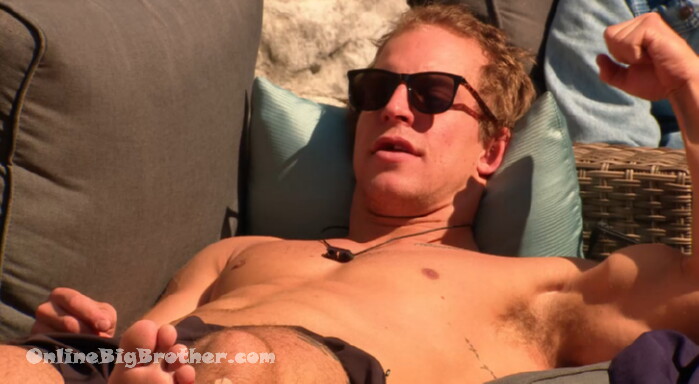 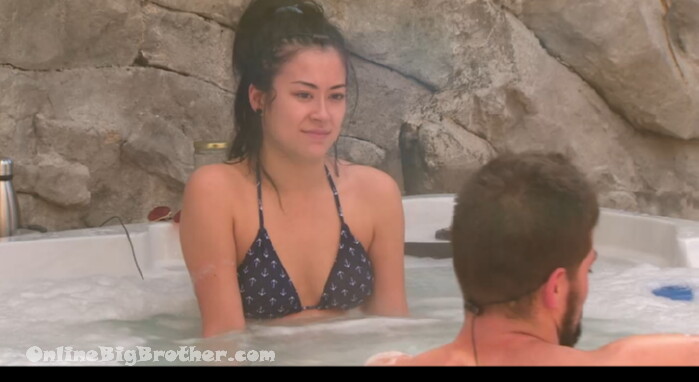 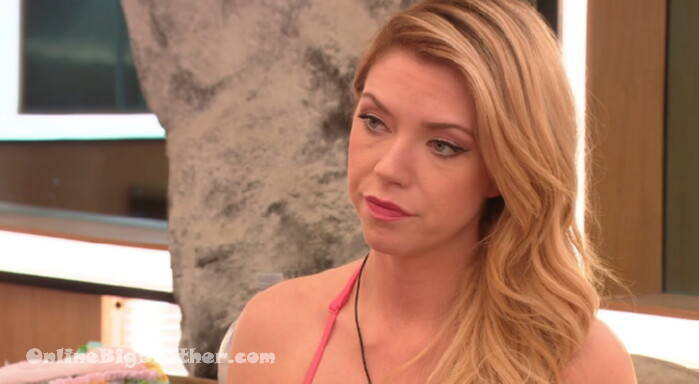 2:31pm HOH Chelsea, Sam and DAne
Dane has his shirt off as they study/speculate competitions.
Chelsea and Sam say Dane is “so distracting” right now.
Chelsea – HOLY
Sam – all you need is a tan
Dane – I don’t know who is in the SEVEN but..
Chelsea – we know where to contain the information
Dane says that Kailyn is just campaigning for herself. Sam says that MOMMA is throwing her and Adam’s names out there.
Chelsea believes that because it’s just easy for her to throw those names out there..
Chelsea names the people in this group they are thinking of forming, “us three, Adam, Anthony Cory and Mark that’s 7”
Dane – if would be good to get Mark on board… he’ll win the mental
Chelsea- it’s perfect timing right now..
Chelsea says she’s close to Damien but in the end of the day everybody has to go home
Dane leaves says he’s onboard with that group
They talk about this 7 person group they want to form to survive the double
Chelsea – there’s people in that 7 if they are not working with us they will be against us.. If we have a big group we have that safety in numbers.. Otherwise it’ll be a couple trios and a couple pairs..
Sam – I really want Esti and KIKI
Chelsea – I really want them gone too
Sam – I really trust Dane
Chelsea – I think we can for now..
Chelsea says during the double eviction Dane is going to “cut his [Adam] throat”
Chelsea is worried that COry will in the HOH and go against them.
Sam doesn’t think Cory, Anthony or Dane would take them out if they won the next HOH.
Chelsea -if HOH is one of those people in that 7 we can figure it out.

Chelsea – what about Kyra
Sam – is Kyra part of that 7?
Chelsea – I like talking about the game with Kyra but I’m not blind to the fact the house see them as someone they don’t want around .
Sam says they should leave Kyra out of the 7 She doesn’t want people in their 7 to think they can’t go for Kyra
Chelsea – if that group of 7 is working together and each person has someone on the outside..
Chelsea – Makr has Damien
Sma – Adam has Anthony
Chelsea – Dane has the girls ..
CHelsea – if Damien wins [HOH] mark and Anthony has his ear..

Feeds down for 3 hours 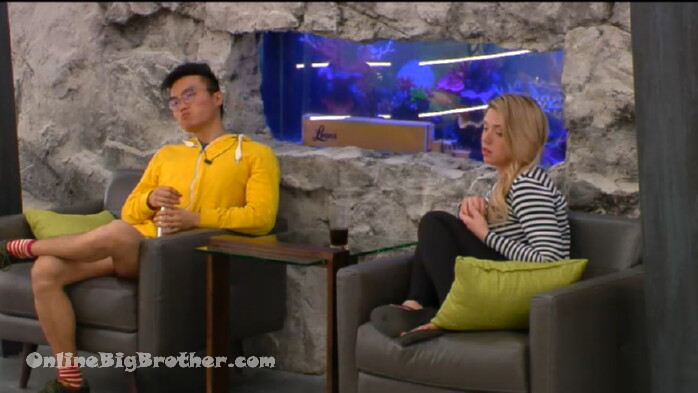 6:00pm Feeds come back.. Chelsea talking to Eddie.
They complain about how there’s another full day to wait around. Chit chat about the obvious like after the next HOH there will be a double
Chelsea – Crazy
Eddie – Double is crazy
Chelsea – we’re getting there
Eddie – crazy .. how many spots in the jury
Chelsea – 7
Eddie – after this week we still have 3 weeks to go until Jury..
Chelsea – that will be crazy
Eddie – Crazy 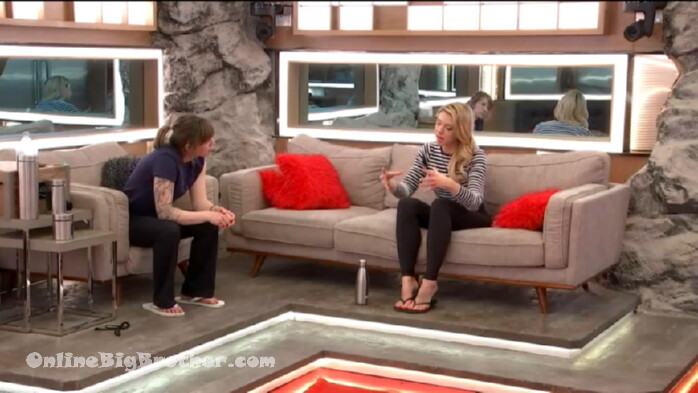 7:38pm Chelsea and Cory
They agree to get the logical people in the jury house. Cory says she would want to make sure the people in the jury know what you did and appreciate the game you played.
Cory – I would be that person for you
Chelsea says she would do the same for Cory.
Chelsea – if I go.. Good game you got me. I want to vote for the person that played the best game.
Cory says she doesn’t want CHelsea, Sam. Adam and Anthony nominated next week.
Chelsea – I’m thinking about the idea of strength in numbers i don’t know where your head is at with that type of situation
Cory – I would love to be
Chelsea – if you know you have smart strong players that have your back .. the game isn’t as crazy
Chelsea – I feel good about Kyra but I understand how the house is seeing people. I’m not blind to that.
Chelsea – at some point everyone’s got to go home.. I’m noodling around with the idea of a group of people that are trustworthy and smart.
Chelsea talks about the benefits they get by forming a 7 person group to go to Jury.
Cory mentions Adam bringing it up the topic of a group that covers all the bases. She’s open to the idea.
Chelsea asks her who she’s worried about putting her up. Cory thinks there’s a few people that would consider her a easy nomination.
Chelsea saying how she’s not really talking to Kailyn anymore because of the tension there’s no point


some kissing around 10pm

I know. I like Damien, he comes off as fairly unassuming person but he is not playing the game at all. He has done nothing with the intel he got from Leon’s lounge so I would rather Kailyn stay than Damien.

OMG! I don’t want Brigade 2.0. I really don’t. I want someone from PB to go out next week. I kind of feel like they have wrapped everyone around their fingers which is good strategy and in spite of their personal struggles with each other, they are proving their fidelity to the group. It makes for boring TV however, as the people in that alliance are far from likeable. Since, I am not getting a penny out of the winner’s pay check, I may as well get some good TV. Vote PB out of this season other houseguests and bring their arrogance down a notch.

Kyra! Kiki is not interested in you and not everyone has to kiss you or your self-pitying high and mighty ass. Get off your high horse and stop telling people to man up.

And Chelsea, you are a smart lady. You have restrain, balance and sensitivity to play this game. But, are you even listening to Adam? He has said so many times straight up that he has an alliance going on with the boys. Wake up!

Can everyone rally against the Pretty boys already….

Not going to happen .. “they’re too pretty for this..”
lol

hey simon or dawg,
had an intenet issue this evening, so one question:
how many waffles in target did i miss?