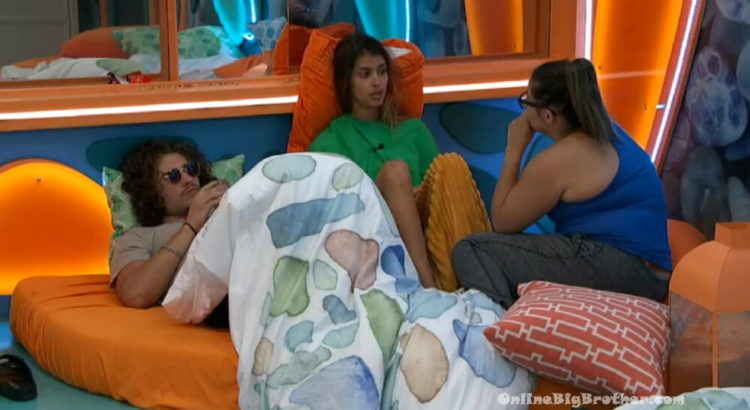 Big Brother Spoilers – Brit and Frenchie the clown have been having one on ones during the afternoon. Frenchie is still going and I’m so looking forward to a Frenchieless Big Brother 23 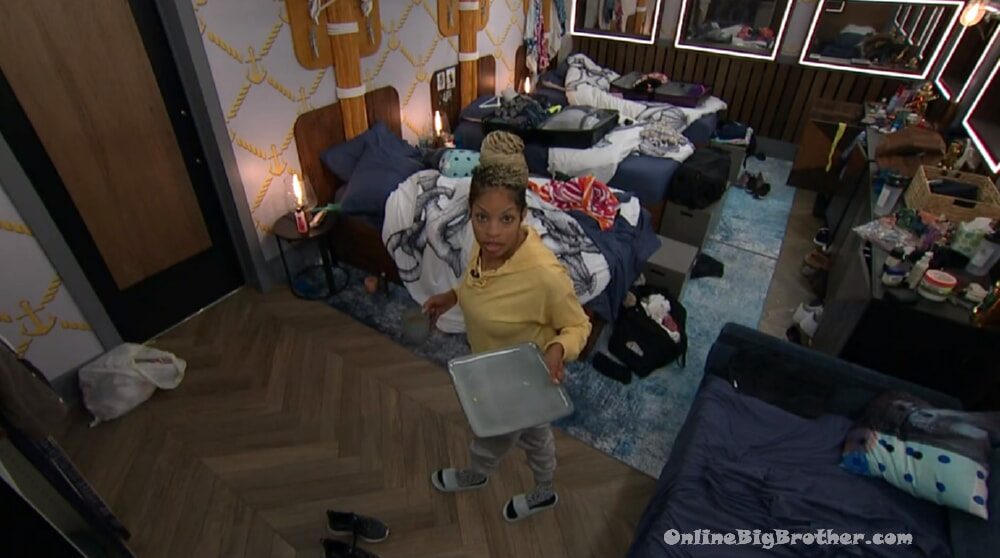 4:50 pm
Britini tells Sarah Beth that Brent is going after Azah, Her and Claire
They pinky swear “this stays here” 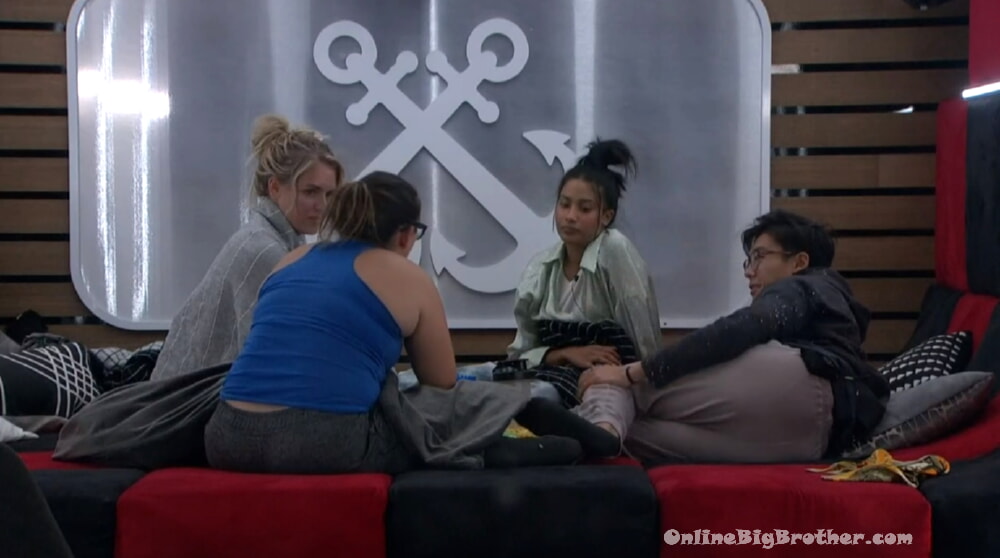 5:06 pm
Britini says her One on Ones “Flew” by she started at noon and it’s not 5. Dx says they are counting down the hours at midnight they are off slop so time is going by slowly 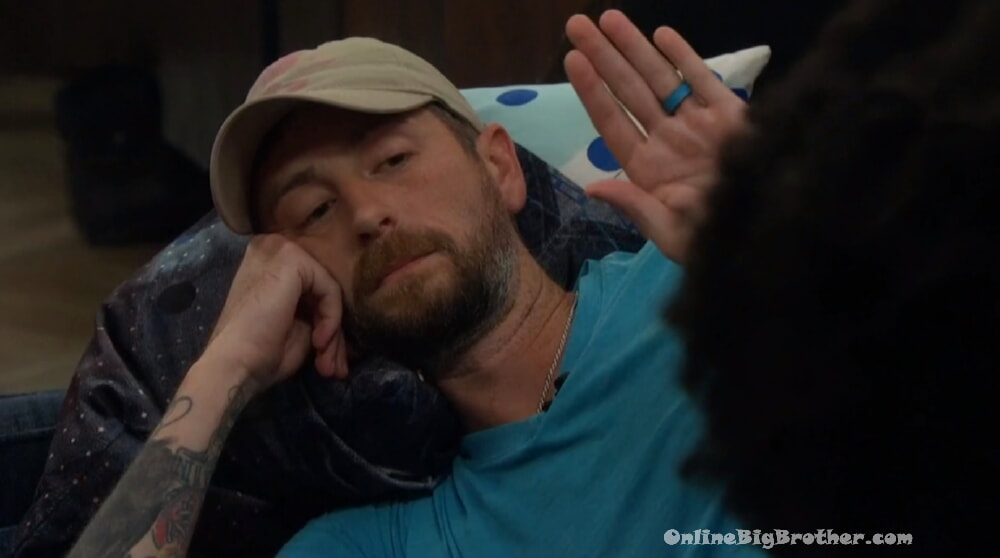 5:37 pm Frenchie the clown and Azah
Azah – I work in tech
Frenchie – I knew.. I knew you were super smart. I’m proud of you
Azah – I love my company I love my work.. I came here to play
Frenchie – I’m rooting for you so hard
Frenchie says in terms of Game “I’m done.. last night I turned it off. My ignition is off”
Azah says it’s a good idea for her to hide that she works for Tech even though other people in the house have come out saying they work in Tech.
Frenchie agree “We all know how people can be”
Frenchie didn’t think he was going to be the oldest person.
Azah is happy to see the age spread “I like that there’s more people in the upper spectrum” (yup)
They talk about not liking Trump
Frenchie – f** him
Frenchie says hating Trump is the “Cool thing to do” because “everybody hates him now”
Azah – I would keep quiet on that stuff
Azah – I have some friends that are Republicans that were part of the never Trump train..
They continue sharing their political Hot take like “I really admire Mitt Romney” 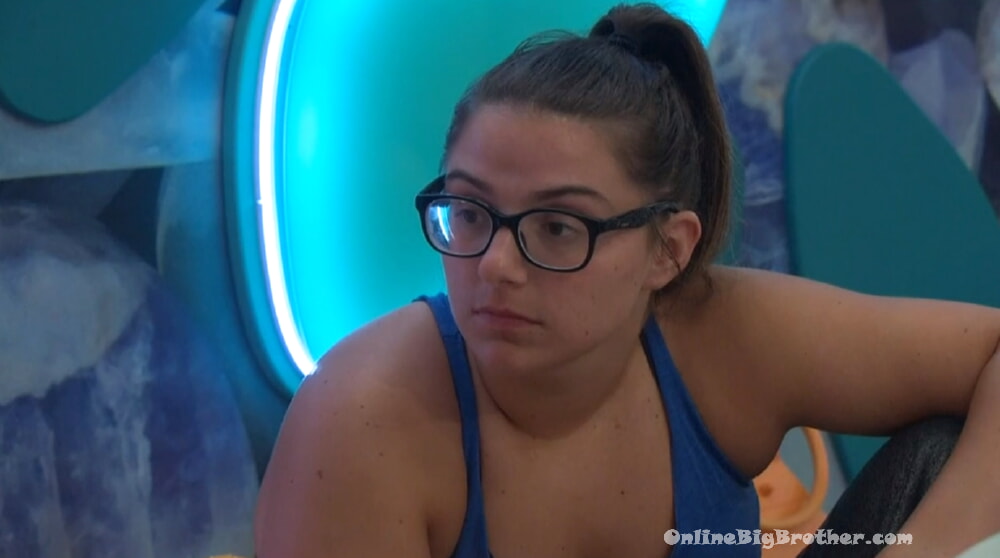 5:56 pm Britini, Alyssa and Christian
They’re talking about Frenchie blaming the girls allance on Brit.
Brit – I can tell you I had nothign to do with it I wasn’t even there
Alyssa – Don’t show him you’re upset
Brit – I’m cool let’s move onto next week
Alyssa – just know if he’s seeming comfortable and confident it’s just because people are just not wanting to deal with him. I haven’t talked to everyone but for me, I don’t think anybody’s mind is changing and I don’t see that happening at all so don’t worry about it. There’s literally no positive keeping him here 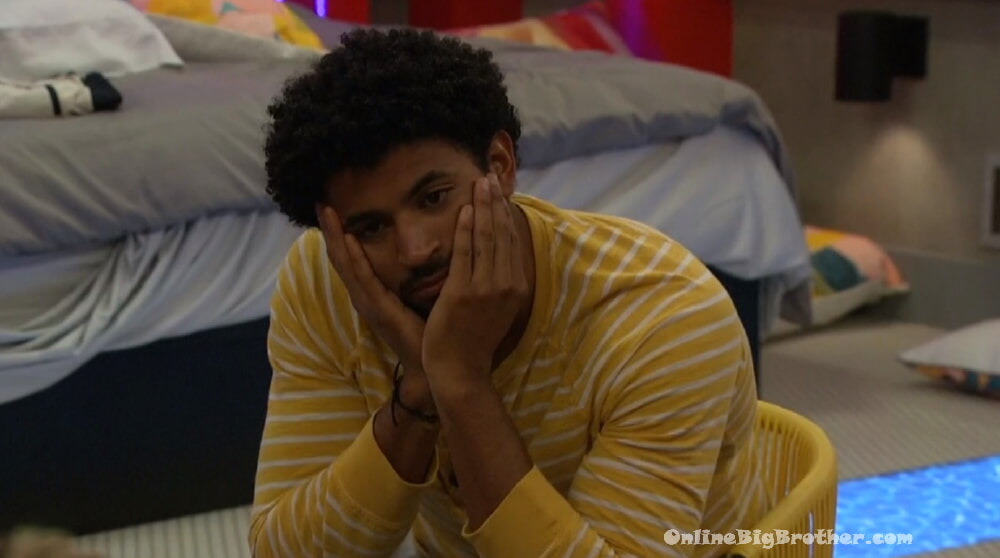 5:20 pm – 6:30 pm Claire, Kyland, and Tiffany
Tiff has only had one One on ONe with and that was with Brit. She’s not sure if she’ll have one with Frenchie because he thinkg he already has her vote.
Tiff – I’ve been hearing that he’s been saying he’s for sure got two votes. On of them me
KY – I didn’t hear that. I heard I’m not campaigning if I stay you won’t have to worry about me and..
Tiff – he made everybody the same promise
Ky – exactly again.. did you learn nothing
Claire – seriously
Ky – he said that to me and Derrek literally everyone
Claire – I talked to both. Frenchie’s pitch was me was basically like “you know I’ve always show down your name when someone brings it up.. there was no way you were touching the block last week..
Claire – I’m like ahh ha sure I was like what will you do if you stayed.. ‘Play quiet.. I wouldn’t want to play the game anymore
Claire – I’m like that isn’t remotely true if you were staying wouldn’t you want to try and work with me
Tiff – camp comeback?
Claire – he says ‘have fun’ I’m like this is the worst campaign
Claire – I talked to Britini. I felt good if she stays neither us or the kings have to worry
KY – did she say that?
Claire – she alluded to putting Brent up.. ‘there’s a big threat and I want to come for him’
Claire – I feel like that’s true

Tiff – she said to me that Brent has to go
Ky – name?
Tiff – yes name. I also heard.. someone said to me someone from our team should win it because their team which is the aces is working with the kings.
Ky – can you repeat that
Tiff – someone on the aces told me that someone on our team needs to win it because their team is working with the kings.
Tiff – either you don’t know or we don’t know something
Ky – I would say the first one
Tiff – the Kings are definitely with the queens.
Tiff – something else I did hear. Brent said not to the person that told me so it’s hearsay. Brent looks at Britini and Claire as a strong competitors and those are his targets.
Tiff – I am voting for Frenchie
They laugh

The conversation moves about Frenchie constantly coming up to the HOH asking to pee.
Tiff – everything he does is for game
Claire – he’s pitching to everyone.. everyone sees through his BS
Tiff – britini is uncomfortable about X
Tiff – she said he’s the only person she talked to that didn’t promise her his vote. He said he wanted to give Frenchie the opportunity to pitch his one on one to him.
Ky – that’s fair
Claire – she mentioned Hannah was very vague..
Ky – if the two went up who would you vote out.
Tiff – If Brent is on the block I’m voting him out
Ky – against anyone?
Tiff – it would be my desire yes.
Claire – for me, brent has aggressively said my name, and people have said my name. I’ve heard sorta Whitney hasn’t said my name much not that I’ve talked a lot of game with her. I think she’s smarter than Brent in terms of the game.
Claire – Brent is more transparent.
Tiff – Brent is very in check with his emotions, he knows how to use his powers of persuasion. He is intelligent. He persuades people by adding statistics, scientific theory, and data behind it. He is engaging in his conversation. Even when the pressure is on him he doesn’t do what people usually do. He stays relevant he doesn’t hide in the shadows. He continues to integrate himself into conversations and stay relevant so he’s not viewed as a threat. He’s a much smarter player than Fnrehcie. Frenchie will blow up his own game.
Tiff and Claire agree most of the house will agree that Brent is the stronger player.
Claire says Whitney has more connection in this house “She has better ties with the kings”
Tiff – Alyssa and Whitney keep the kings and the Aces together. There’s one thing I like about Brent I do believe he’s loyal.
Ky – to who?
Tiff -that’s the thing. I believe he was loyal to Frenchie. To this day he has not said one bad thing about him. He has not exposed any of those secrete they shared. He hasn’t exposed any of those conversations they had. The only thing he said about Frenchie is he’s throwing my name around.
Tiff – He has not blown Frenchie up after all the talks Frenchie had about Brent. Brent has kept Frenchie’s secrets safe.
Claire says the targets seem to be Brent and Whitney then Christian and Alyssa “from the other side’
Tiff says Brent is a good target to keep in the house “A shield”
Tiff says she’s fine with either Brent or Whitney leaving adds that she thinks Whitney should go pre-jury “it’s only fair so she can go home and see her kids”
Tiff says she knows Brent is coming for Claire and that is why she’s more uncomfortable about him. She thinks if Claire is the target she might go up beside Claire.

They continue to go through scenarios about who should go. They are happy with the Kings+queens+ one ace alliance. Tiff mentions plus Hannah but warns them that Hannah is very smart much smarter than your average 21 year old.
Tiff – I can’t live in here with Frenchie seriously. If he would have gotten that second week of safety OH MY GOD.. like .. I would be like.. I might be like f** this I’ll go home. A peace of mind means more to me I will sleep on a floor in an unfurnished apartment by myself to have peace of mind rather than a huge a$$ house fully furnished with people driving me crazy.
Tiff – Alyssa has been very forthcoming with information.. The loyalty she is showing and the trust makes it hard fo me to look at her as someone that should go up
Tiff – if we can split up Brent and Whitney and the aces are down to three. DerekX is with us I think Hannah will listen to Derek we can have Hannah to.
Ky – that’s a good group I would like to hang out with the most
Tiff – how do you feel about Britini?
Ky – She said that .. I promise that me and my team are not to go up or up as a replacement so. It’s one of those things she went out of her way to make a promise

Claire is worried if Whitney goes next Brent is close behind. If Brent goes first Whitney will sink into the background.
Tiffany says she’ll latch onto someone like she latched onto Xavier.
Tiff – you know who hates that.. Frenchie. He’s like if I wasn’t married she’d be on me last week. 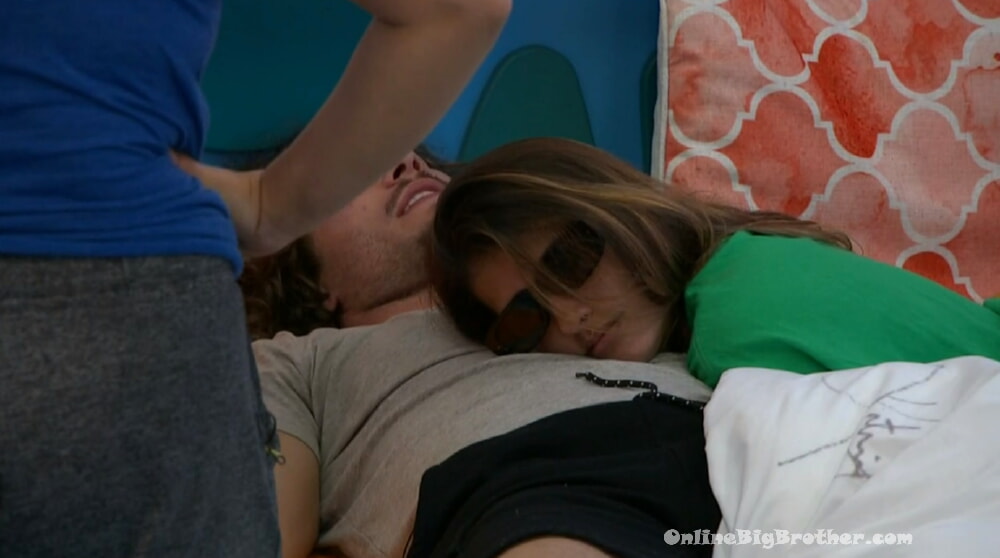 Meetings in the HOH

I dont get the feeds this year, so can someone tell me why tiff has such a boner for getting the clown out?

Daniel
Reply to  sick of it

Because Tiffany is shady and the glue clown knows this.

Fake crying about her children in front Alyssa and Derek X … throwing a rogue vote to get Alyssa out … Alyssa should have reason to be Skeptical of Tiffany.

He trusts Tiffany more than anyone.And she did the rogue vote for him.

Miss Impression
Reply to  sick of it

Mostly she’s just annoyed by him because he’s too much to deal with and game wise he’s too unpredictable and emotional and will turn on anyone at any time.

Mitch
Reply to  sick of it

EVERYONE wants The glue clown out. You can’t believe a word he says & he turns on his own alliances. He’s a legend in his own mind. He’s actually an idiot who thinks he’s a genius.