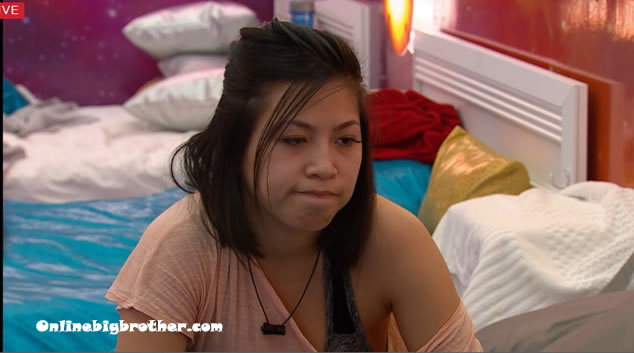 (FYI.. uploading these videos can take anywhere from 10 minutes to 60 minutes)

10:15am Sindy Ika and Demetres
(they’re talking about last night’s meeting of the six)
Ika denying she yelled at Neda says it had everything to do with Neda’s attitude..
Ika says she literally wants to take Neda and pitch her in the F****g pool
Ika says they should have brought Neha back instead of “that f***g b1tch” *Neda) goes on about how Neha is a “Bad B1tch”

Ika says they should evict Neda, “Sorry it was a joke”
Sindy – I understand both sides.. I don’t have a personal pull.. Either one of them staying isn’t going to benefit me

Sindy says there’s a vibe a tension in their group now
Ika blames it on Bruno, Kevin and Neda calls them F***G liars
Sindy – we have a good alliance we just can’t communicate

Ika – I have never accused any of those people of questioning us (Alliance) .. but that f*** little b1tch (Neda) .. where does she get off saying sh1t like that
Ika calls Neda a “smart a$$ mastermind B1tch” says if they had told William about the 6 they would have been on the block this week.

Ika – you suggest we smooth things over with Bruno
Sindy – if you guys want to move forward with the 6.. You and Bruno should talk
Sindy – I feel very in the middle and the mediator.. I really want the 6 to work
Ika calls Bruno, Kevin, Neda a$$holes

Sindy says Ika is aggressive when she voices her opinion and is very short. Parts of the alliance don’t feel like they can talk to Ika.
Ika calls Bruno, Kevin, Neda “F****G liars”

Sindy – I’m telling them I’m fine with voting for whoever but I need to talk to Ika and Demetres to
Sindy says Kevin agrees with her.

Ika says she wasn’t the one having trust issues it was Bruno, Neda and Kevin.

Sindy says if Dillon stays they are going to reel him back in
Ika – and have him target us.. especially now..
Sindy says if Emily stays she’s going to “you guys”
Ika says Emily will go with Dre, William and Karen
Sindy points out that (Karen, Dre, William, Emily) side can only attack people in our alliance and Jackie.

Sindy says she’s in a bad place regardless of where she votes.
Ika says William is done with Kevin if he votes out Emily.

Ika calls Neda “Toxic” “she’ll be the death of this alliance”
Ika – if you guys evict us you’ll regret the day you kept her
Demetres – everything this alliance has done has been for her (Neda) game
Ika – she’s ruthless..
Ika says Neda wants Bruno, Kevin, Sindy Jackie and Dillon
Demetres – we’ve been replaced by 2 stupider people
Ika says if Dillon or Jackie win HOH they will take either her or Demetres out

Ika says Dre, William and Karen are not strong she’s been with them for the last 30 days but they are loyal.

Ika says they will keep Dillon because they need to be in a good spot with them.
Sindy – are you really OKay with that if I keep Dillon..
Ika – Yes, because I care about you and I don’t want you to feel uncomfortable
Sindy says if she votes to keep Dillon she doesn’t want Ika to think she’s picking a side
Sindy – I trust you two so much.. will you be OK
Ika – yes.. I would tell you, as a friend it’s in your best interest.
Sindy starts crying.. says for her to say that it’s really nice.
Ika says she’s Okay with keeping Dillon
Demetres gives her a hug.

12:45pm Bruno and Neda
Talking about Ika not being capable of having a civilized conversation
Bruno says he heard Ika and Demetres whispering last night saying it’s them 4 and Karen..
Bruno – they will turn Karen against us instead of Jackie
Neda says she really nervous.
Bruno says he’s taking a straight shot at them, Ika and Demetres.
They agree if Sindy wins the HOH it might be bad for them. They talk about Sindy trying to play both side.
Neda warns that Ika has her claws in Sindy.
Bruno agrees stresses they have to really be careful with Sindy not to turn her against them because if she flips sides they’re f***ed
Neda tells Bruno they need to keep talking to Sindy and stress it’s stupid if Sindy joins 2 pairs (Dem/Ika, Dre/William)

Bruno talks about how Ika controls Demetres. He was talking to Demetres and while he was in the middle of a sentence Ika walked in said “We’re not talking about that anymore” and immediately he stopped rolled over and shut his mouth.

Neda – he’s going to look so stupid on TV
They want to tell him but they can’t.
Neda – she’s ruining his game
Brubno says if they got rid of Ika Demetres will get closer to them.
Neda wants to rile Dillon and Demetres up to go after each other.

2:30pm Ika and Dre
Ika – mark my words if I win HOH i’m putting Neda or Bruno or Neda and Jackie up and I’m not changing it.
Dre says she told William to put Jackie up and he told her it’s not your HOH
Ika – really
Dre says William just chills with Kevin for pleasure he’s not getting anything for his game out of it.
Dre – I love William, we’re just not on the same page
Ika says if she had Neda and Jackie on the block Sindy would vote to evict Neda.
Dre – Jackie is alone.. she works alone..
Iak – does she think they’re using her
Dre – yes
Ika – can we get Jackie
Dre – no

Ika – Kevin, Bruno, Emily, Dillon and Neda are in an alliance
Ika – Sindy, Neda, Bruno and Kevin are working together
Ika – Sindy and Bruno are close, Sindy, Kevin and Bruno have a tight bond.. if we get Kevin we can get Sindy
Ika says Sindy thinks Neda is trying to put a wedge between her and Sindy.
Iak says in the beginning it “Should have been” Ika, Neda, Bruno, Sindy and Kevin. “and I would bring in Demetres but lines got blurred when I started liking you and they saw that”
Dre – you don’t think you can get Neda back
Ika – no

5:00pm Sindy and Bruno
Bruno asks if Ika is voting out EMily.
Sindy says Ika is going to talk to Dre and William.
Bruno points out how Ika is now getting close to Kevin after all this time being against him.
Sindy says their three (Kevin, Sindy, Bruno) is very important to her but she also wants the six to stay whole.
Bruno says how hard it is to talk to Ika when she’s pissed.
Sindy understands says she brought that up to her adds that Demetres was there and he was agreeing with her.

5:40pm Dillon Emily and Karen
Dillon says he might put up William and Kevin because William nominated him and Kevin kept him on the block adds Jackie’s name in the mix.
Dillon tells Karen if he stays he’ll team up with Karen they’ll go far.
Dillon says he likes the William, Dre, Demetres, Ika side because there isn’t as many vets in it.
Karen says that Kevin told her “I’m playing the best social game of my life”
They mock this.
They talk about Kevin always mentioning his “Followers” outside of the game.
Karen – I’m a nobody thats a realtor that just happens to be here

They list off the people that haven’t done any cleaning in the house: Neda, Sindy, William and Ika
Karen says that Neda doesn’t make a big mess but Sindy sure does.
Dillon says it will be so funny if they can get Neda out right after her immunity is over.
Dillon – Canada doesn’t like her I know that for sure
Karen says if she wins HOH it’ll be Jackie and Kevin, “they have made my life miserable”
Karen calls neda the queen bee if they can take her out that side will crumble.
Dillon says getting rid of Kevin would be big too he’s a integral part of that side.

If there is one person in that house Bruno is totally honest with it is Karen. He doesn’t ever target her, sits with her and talks totally honest with her. He always has. He has said before to his own alliance that he won’t put her up. Too bad the trust doesn’t come from her as well. If anyone is lying in the conversation it is Karen. She has never gone to anyone and told them that Bruno assures her every week that if he wins HOH he won’t put her up, and she doesn’t have to worry. Yet she continually throws his name out there. I don’t get her logic. Go after someone who is going after you. There are several, but she always comes back to targeting him. He never says anything nasty about her, yet she is vile when speaking about him.

Bruno attempts to delude Karen with the same crap he throws at everyone else. How many people has he said, “if I win hoh, you can kick your feet up.” With so many people with their feet up in the air, who is he putting on the block?
Let’s be real. Bruno considers Karen a non-threat simpleton with a vote.
I actually doubt anything that has come out of Bruno’s mouth has been authentic to anyone. In thirty days.

I just realized the collective IQ of this group is abysmal. Just realized Neda is petty and an idiot – the hyperbolic reactions and convenient ‘tattles’ are so obvious and transparent. Kevin is not actually that smart and sort of terrible at reading people. I can’t believe Sindy and William of all people are the smartest there. That’s not saying much for this group.

I miss Gary and his shot of unique entertainment.

If Neda’s IQ is so low why is it she has determined who gets evicted and when so far when she has only had 1 HoH and the other side has had 4?

Is it her fault Ika and Demetres keep doing her bidding? Are they her puppets?

Charitably speaking we say she has a weak social game; some would say her mean/b*tch side was exposed.
She had the cards stacked in her favour at the beginning of the season more than anyone, including vets already knowing they would play with her —
Despite these things, she has no ride-or-die, and her number’s up now.

She’s not smart enough to play with women.

She single-handedly decided to outwardly start a fight three days ago with Ika: clearly a mis-calculation. Because of her poor relationships, Sindy is not with her, causing Bruno & Kevin to also not be on-board with her. Now she only has Jackie.
Why did Emily so readily turn against Neda? because of the many times she showed Emily her b*tchy side (which Emily publicly said multiple times it bothered her) — its all in the feeds.
Bruno/Kevin see through her. Sindy sees through her. They aren’t going for Ika/Deme. The rest of the house already call her ‘Queen Neda’ (ironically).

She’s the one who the most advantages and the best reputation stacked for her at the start, and who lost the most.

That’s a crash and burn.

Ika is pure hatred. She is never happy.