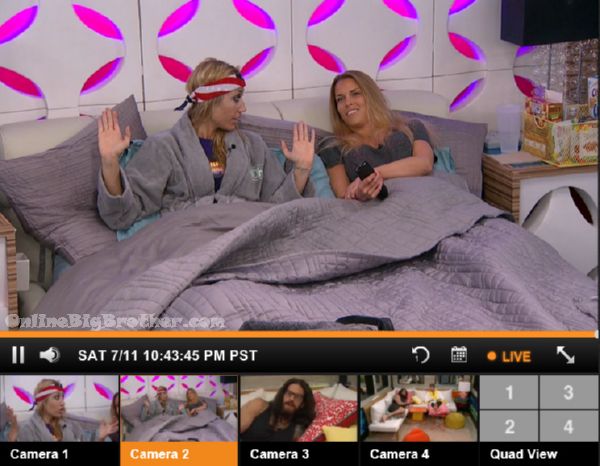 10:43pm HOH Shelli, Vanessa
Vanessa has a plan to make Jeff look like Audrey 2.0
She threw someone under the bus and called out on it.. She wants Jeff to blow his game up and get in an argument so she comes out as the hero evicting him. 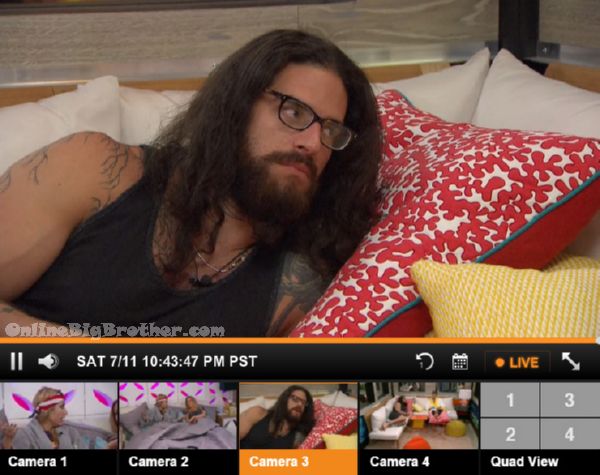 10:43pm Clay and Austin
Talking about the plan that will help give her justification to put up Jeff.
Austin says he didn’t want to do this but feels they have to help her out stick their necks out
Austin really needs to get Jeff out
Clay agrees says everyone is on board.
Clay points out getting Jeff out will be seen as a defining moment in the game.
Clay says Jeff is connected to more people than James. Jeff’s the much bigger target.
Austin mentions Vanessa was mentioning jackie at one point
Clay – that would be a waste.
Austin says Jeff wants to take him out next.
Clay says Shelli is up in the HOH she’s on the same page as them/ (Put up Jeff)
Austin – Meg is f***, when he (Jeff) goes there’s so many options
Clay is going to get close to James Austin is going to get coseo to Jackie.
Austin – Meg and Jason will be all alone.
Shelli comes in to get Clay. 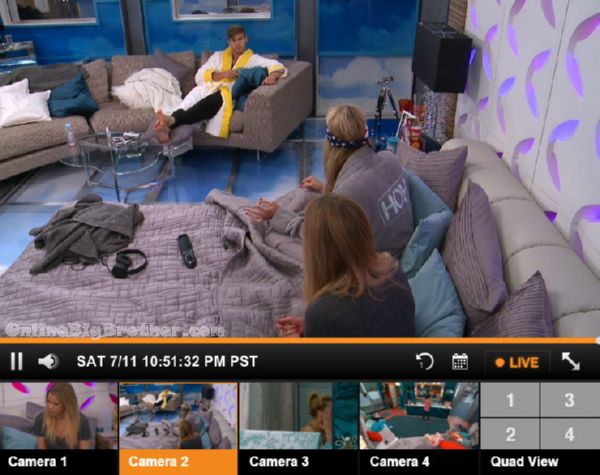 10:51pm Clay, Shelli and Vanessa
Vanessa – how did Audrey become Audrey
Clay she got too involved.
Vanessa- to starting a rumour about someone acting like their friends then having it all exposed.
Vanessa -0 we have all those ingredients for Jeff… making him the public enemy
Vanessa is going to expose Jeff saying he’s targeting Austin. Becky and Steve can come out and say they are targeting them, ‘His name will become mud”

Clay – Jeff has promised me a final 2 deal
Shelli- when was the last time he brought that up
Clay – A While Vanessa says she needs Jeff to have an argument with someone and have it expose him as a liar.
VAnessa says nothing is staged Jeff is going to get Blindsided Austin is legitimately pissed.

They talk about using Becky she’s an asset to them. 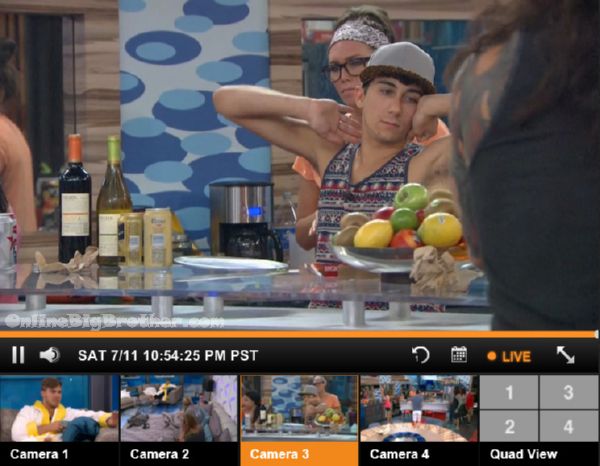 10:55pm They get two bottles of wine and 6 Beers
Everyone cheers for JohnnyMac winning the POV. Jeff doesn’t look too happy complains about the amount of beer they got.

11:24pm After a couple drinks everyone’s moods have lifted.. Jeff talks about the game “Edwards 40’s hands” (You duct tape a 40oz of alcohol to each hand and have to drink your way free)
Becky’s head about it say people play in in dorms.

Jeff excited about the amount of beers they got #BB17 @DawgsBigBrother pic.twitter.com/qKTbILJJgn 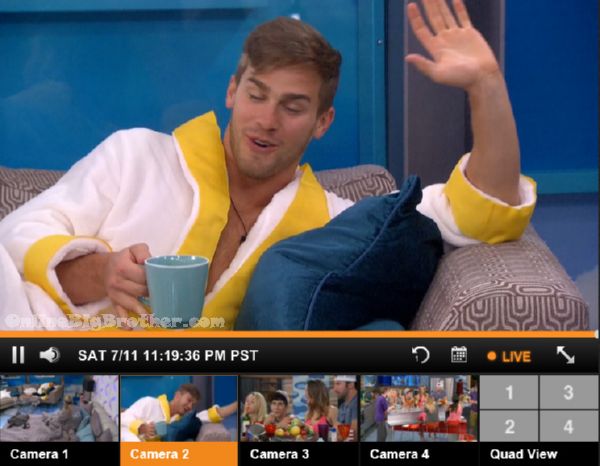 11:19pm Vanessa asks him if he has a twin.
Clay swears on everything he loves he does not have a twin Playing the game. She doesn’t believe it he’s now convinced she’s gone crazy. 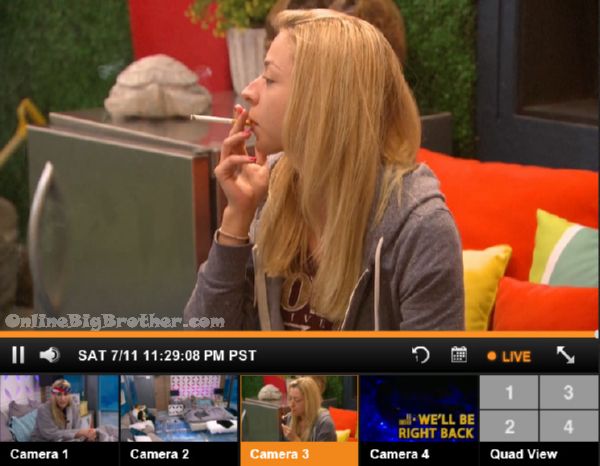 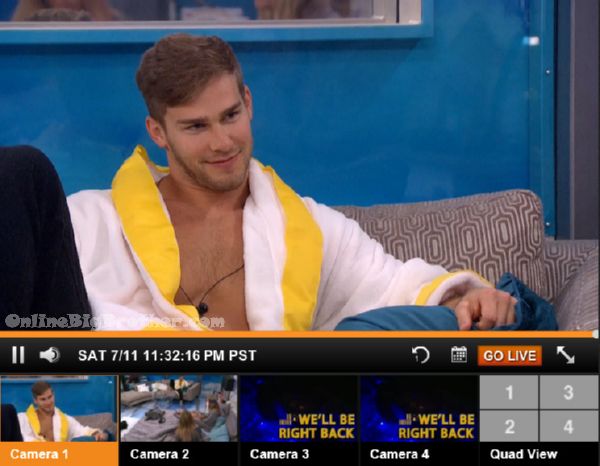 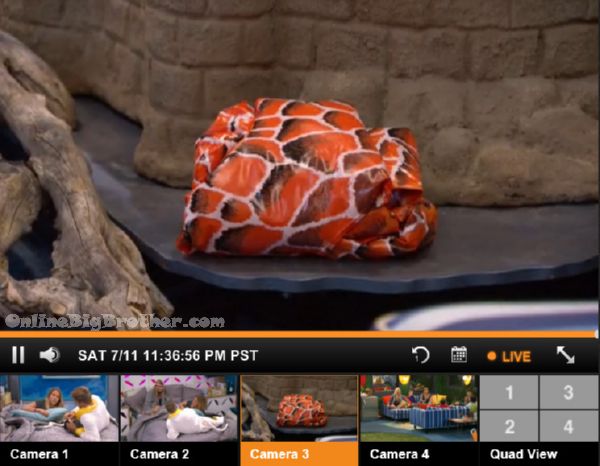 11:39pm They have a wake for Gizelle the blow up Giraffe that James humped to death

Audrey !!
Meg is not this years Christine you are !!!!

Meh…Audrey is starting to grow on me again..at least she brings potential drama and game play. Meg brings tears and ..what ? ….
Exactly.

nope, Audrey is definitely not Christine.
She has some Evil Dick’s tactics though i think.

Vanessa must be the worst poker player bc she is horrible at reading people.

Oh YES Mia, Vanessa is so horrible at reading people, uh she ONLY has made
millions playing poker.

Not all top poker players specialize in reading people. Some of them are just great at probability.

If she honestly even considers that Meg was lying and not Audrey, then she isn’t nearly as good at reading people than he thinks she is. Same with Clay being a twin. She’s not as good as she thinks. Her poker game has to revolve around probability because there’s no way she’s winning all those tournaments by reading people.

Vanessa is a thinker, and I love that about her, but her one downfall (and it will be a big one) is sharing too much information with Audrey. WTH? She just said she was done with her a day or two ago, and now she’s sharing her master plan with the most untrustworthy person in the house? None of her ideas matter if she shares it with the wrong person. Disappointing.

Vanessa does not trust Audry at all
She has to have it perceived that way to keep everyone calm
She is only telling Audry what she has to to try to keep Audry
from doing God knows what?
Van doesn’t even trust Austin anymore
I think Van pretty much trust Shelli and Steve only
Austin was one of my favorites but over the last week he has
shot towards the bottom of my list … his true colors are coming out
If the other side gets power and someone has to go I’m hoping its Austin

I understand that she’ll have to give Audrey a certain amount of information to make Audrey feel safe, and that’s a great manipulation strategy, but she’s telling her TOO much. Vanessa told Audrey she isn’t the target, and she couldn’t say who it was, then 10 seconds later said it was James or Jeff. She’s letting Audrey in on the plan to turn the house against Jeff. I don’t think that’s smart. Yes, Audrey is a liar and no one should believe her, but in that house, all it takes is for someone to plant a seed, and you are screwed. Vanessa also said James was her target, and now it’s Jeff; it should have been Jeff all along. Everyone in her alliance wanted him on the block, and he’s more of threat socially. Plus, he doesn’t trust her whatsoever. There is a just a lot of flip flopping going on with her, and it’s making me nervous because I think she’s been playing a great game. I just hope telling Audrey too much doesn’t come back and bite her in the ass.

Holy smokes Vanessa seems crazy. The eyes are enough to make someone wonder, but then she has that rapid-fire manic delivery. It feels like she is about one missed dose of medication away from completely flying off the handle. I have been rooting for her from the start since I remembered seeing her on ESPN telecasts and liked her. I’m beginning to not be so sure.

Van is my favorite also
And your right … she is getting quite loopy
I think she is overwhelmed n over thinking right now
She is treading in unknown waters and needs to adjust herself
I think she will pull through and get a grip on the situation
After POV she will step back, take a breath, and reexamine her game
especially the Austin situation
If she gets Jeff this week and their side regains power and they evict
James or Jason next week …
Van will be in a fairly good position in the game

Oh Please, leave the people’s personal medications out of it, you have no clue.
RE: Withdrawals etc.. Everyone goes crazy in that house, you would also.
Personally attacking someone because of their meds is just an easy snarky
way for you to look clever. Vanessa is far from crazy, she is hype intelligent
and to me seems more rational in the way she listens and speaks then say
Meg who just laughs & acts ditzy.

Christine is a whore

This cast sucks so bad that I almost miss last years crappy cast. That’s all.

Anonymous
Reply to  Christine is a whore

Your opinions are just as bad as last year’s crappy cast.

The cast
Reply to  Christine is a whore

This year at least there is some actual game drama. Last year, after the HoH was picked and Derrick chose the target, you might as well have started the next HoH challenge. If that was alright with Derrick. Alliances are more fluid and most people are actually thinking about the game, even if they aren’t thinking about it very well-Austin.

Who thinks Clay is a twin?
I actually thought his hair looked different a few days ago
I wasn’t sure though … I’ll keep an eye out
It would make sense to have Male/Female twins
That would explain the missing 2 evictions … someone coming back in
I’ll stay open minded about it.

This year’s cast all seem so fake and sketchy. Usually there are some loyal people in the game but this year nobody is loyal. Everyone is saying different things to different people and you can’t tell who they are being honest to. Send them all home and bring in a different cast. The worst are Audrey, Shelli, and Clay. Just about everyone thinks they have an alliance with Shelli and Clay but they don’t have anyone’s back. If it comes down to it watch how quickly they’ll turn on each other. Someone said they are the new Jeff and Jordan. NO WAY!!

Vanessa is a good reader. but I don’t understand how she don’t see Austin is setting her up to take all the fall for not putting Audrey up this week. he getting her to do his dirty work with out getting his hand dirty and not getting any blow back from the other side of the house. and why is she so willing to believe Audrey over other ppl u never take the word of somebody that lied on u to the entire house. that person word should be mud to u from that moment on.

Finally watched Vanessa’s conversations with Steve and Austin/Liz(Julia).
I think she talks a lot but she’s throwing out things to say (better speech, bad speech) and get feedback to see if she can trust Austin and Steve. Austin gave her answers she didn’t like while Steve mostly didn’t. I will wait till her nomination speech to decide for sure. It seems like her ultimate goal was for house majority to realize that they need to do something for her. But maybe I am giving her too much credit.

As her her idiocy of Clay Triplets, I have no idea why, except to keep him on his toes. She shouldn’t annoy him right now. Sign of playing too hard.
John, Becky, Jason, and Jackie need to talk…. They could get somewhere with their comp abilities. Jackie is super odd right now, she’s sitting around like Victoria last year when she was told to play silent by Derek.

I am so glad this seasons casts talk so much more game. Last year they played pool, cuddled, joked to the point where it seemed like the game was secondary.

Twistin' for the win