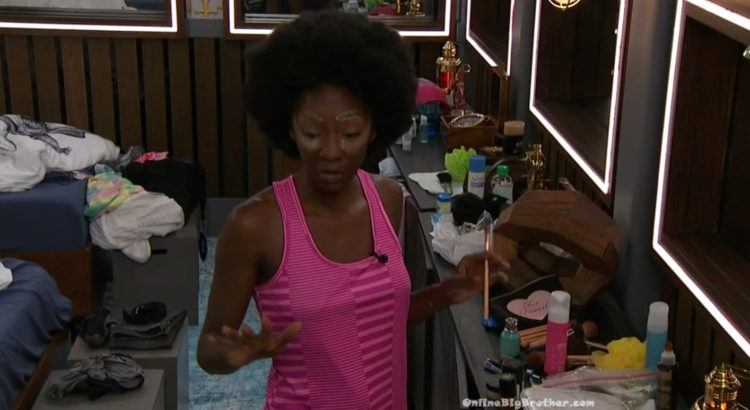 Sign up with Paramount+ and watch the Live Feeds! Try it FREE!

WILDCARD Winner: the winner will also be safe for the week (just the winner, not the winners team). With this reward there is risk. If the winning HG chooses to accept safety for the week, it will result in a punishment that may affect them, their team, or the entire house.

The ranking is back up for BB23 now with a new value.. ZERO! – RANK THE HOUSEGUESTS –

Big Brother Spoilers – Frenchie is a mess .. Sounds like he’s targeting a girl now it’s Alyssa. A combination of her being close to Christian who is was his OG target and none of the girls volunteering to be a pawn this week.

Hopefully, these updates shed some light on how much Frenchie sucks.. 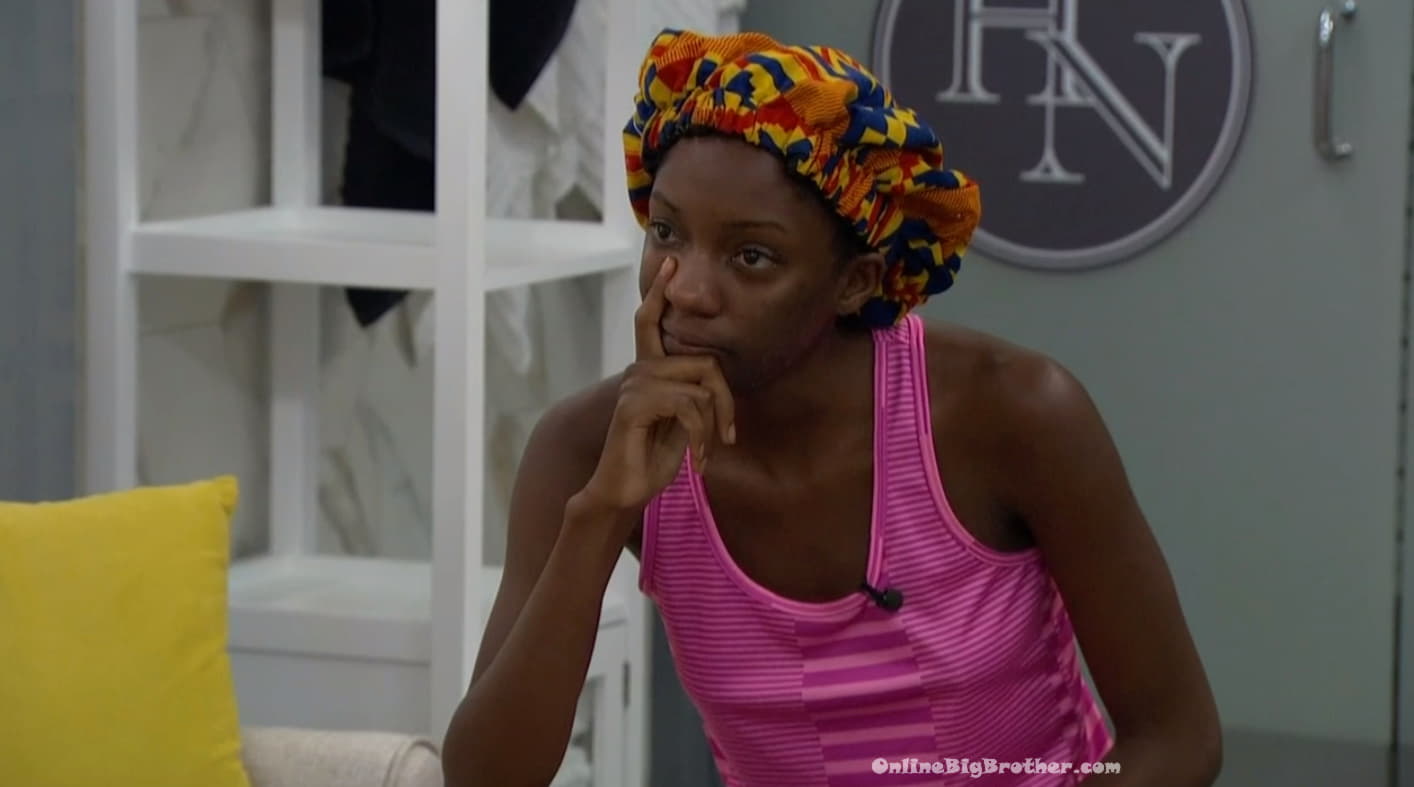 8:13 am Azah and Xavier
They talk about how late everyone stays up talking to Frenc hie
Xavier – let the man have his rest
Xavier mentions he feels like the two of them play the game the same. “It’ll benefit us the long term”
Xavier was happy that he got safety from Christian but he’s also pissed because it’s making it look like they are close to each other
Azah – it was strategic on this part
Xavier says Christian is good at the competitions which is good for them, “We can use that to keep us safe for a while”
Azah – he will keep you safe..
Xavier says the people they can trust are BigD (DerekF) and Frenchie
Xavier – I do like Brent he’s solid
Azah – I like Brent too 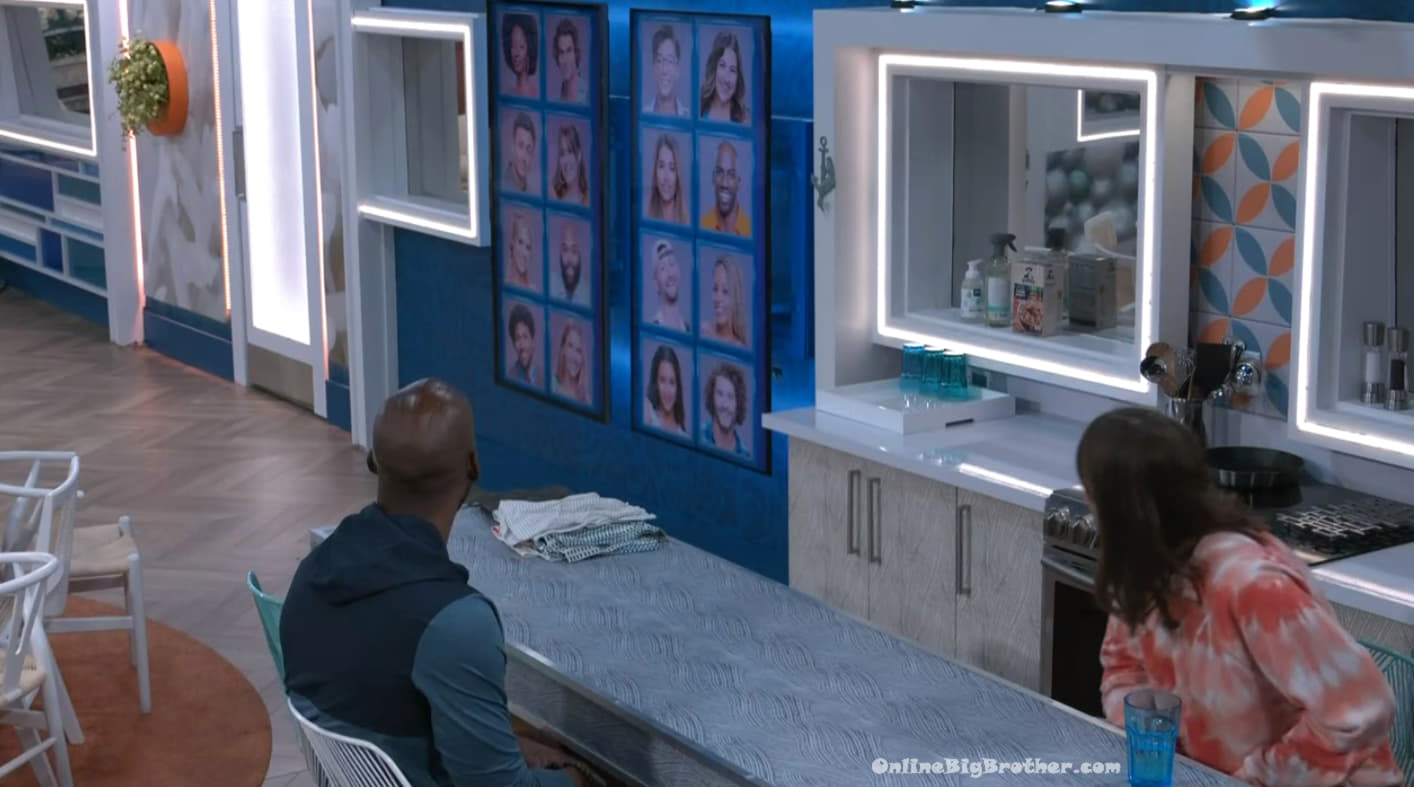 8:30 am Sarah and Xavier
Sarah saying it’s hard to get A one-on-one in with Frenchie.
Sarah – there’s a lot of people
Xavier says he knows he’s safe and Frenchie knows his team is good with Frenchie next week.
Sarah says they have 1/2 the house to vote for Frenchie to stay.
Christian and Alyssa join them… Chit chat…. 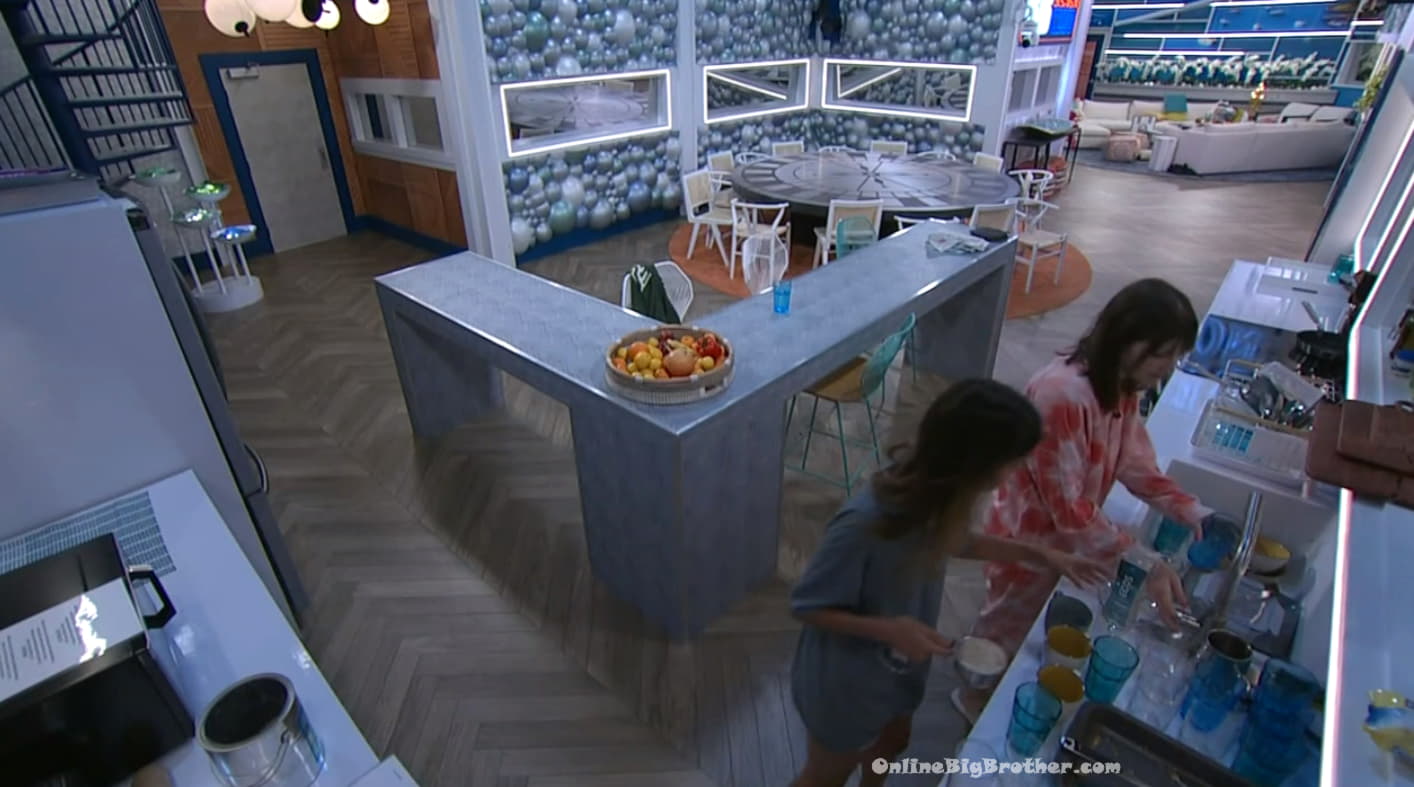 8:40 am Sarah and Alyssa
Sarah says she’s going to try and co-mingle with other teams so people don’t target them as a “strong team”
Alyssa – that’s a good idea.
Sarah – I’m thinking I’m safe
Alyssa – I feel like I am but then I feel like I’m not
Sarah – you can’t be certain in this game. 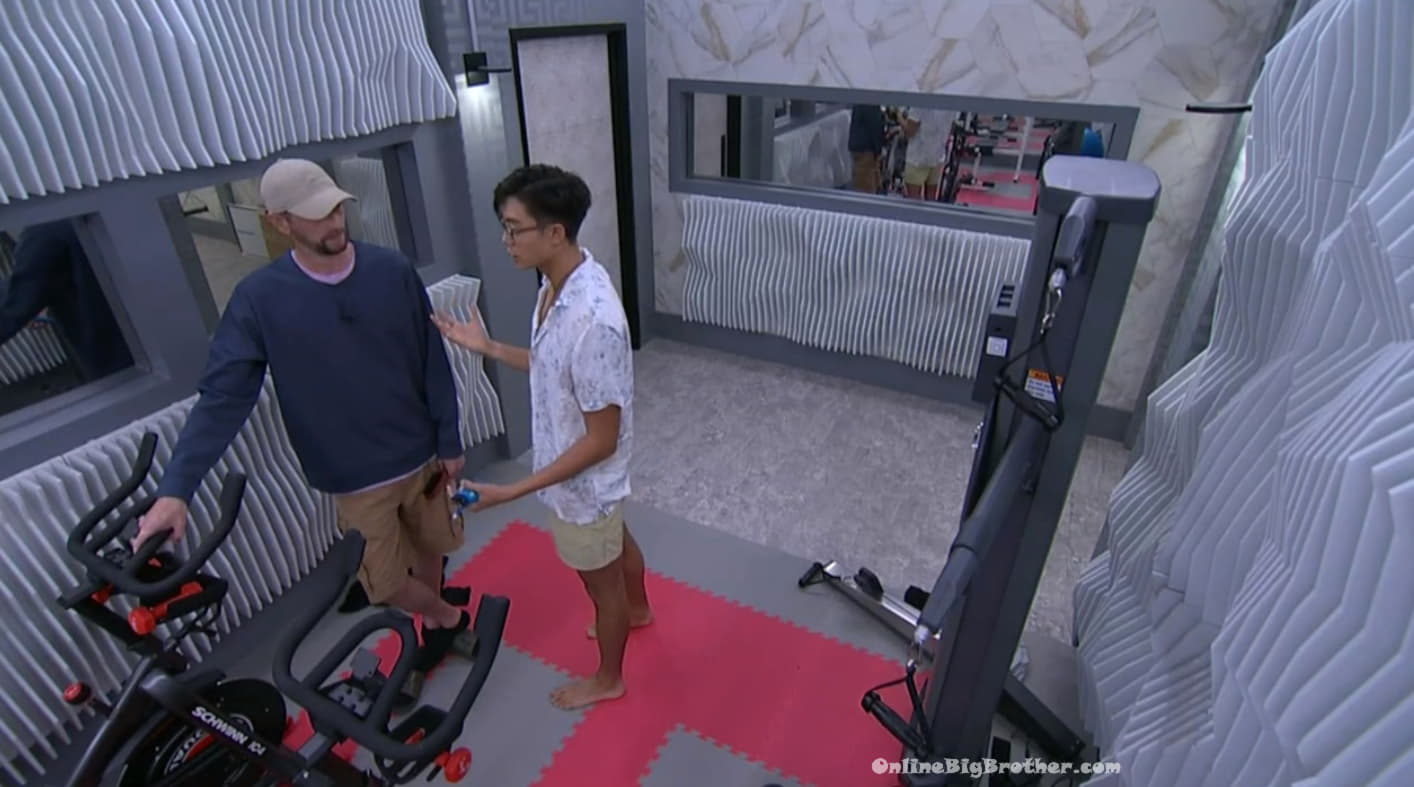 9:44 am DerekX and Frenchie
Frenchie – what I ask is from this point forward I get eth same respect that I’m about to show you. From this point forward. There are people gunning for me after this week..
DerekX – I got you bro..
Frenchie says the reason he was upset is DerekX lied to his face.
DerekX – I played myself.. I don’t know..
Frenchie – you were scrambling.. You had no idea that I knew the names. I can tell wholeheartedly what you don’t realize I am very observant and I knew things. just because I don’t saw things doesn’t mean I don’t see it or know it. 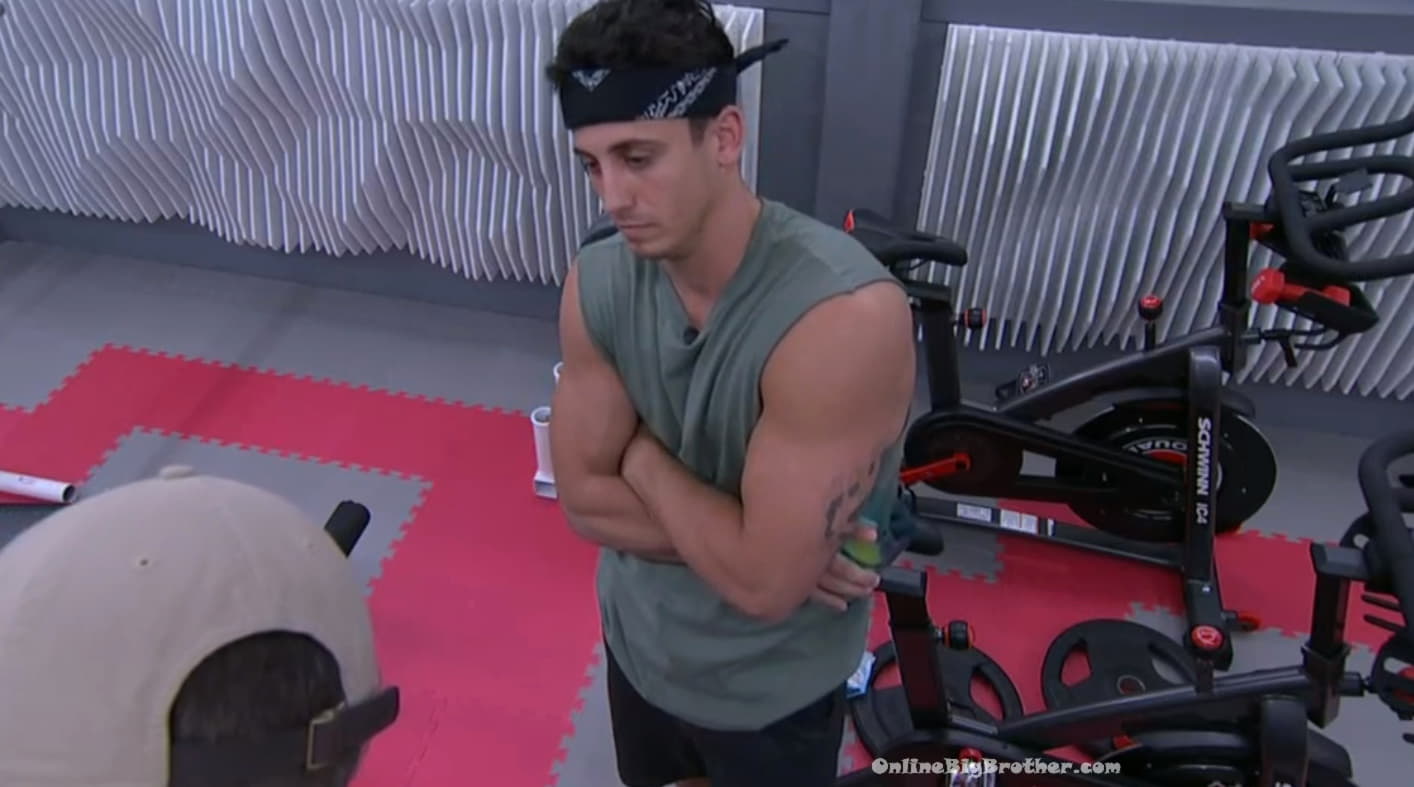 9:52 am Frenchie and Brent
Frenchie – I need you this week.. I’m doing something that is going to piss one side of the house off.. Do I care? No it needs to be done in my eyes
Frenchie – If I can’t get him, you and I can’t get him we’re getting the person he’s closest to (Alyssa)
Frenchie – you want to take a shot at me lets do it.. I’ll take a shot at the person you are closest to.. Nobody will expect it cause I hadn’t said that name to nobody

9:58 am Frenchie and Chrsitian
Frenchie – honestly it’s in the best interest of the butchers I just want o make sure I have all of the butcher’s support it will further our game as a group.
Christian – ok sounds good.. 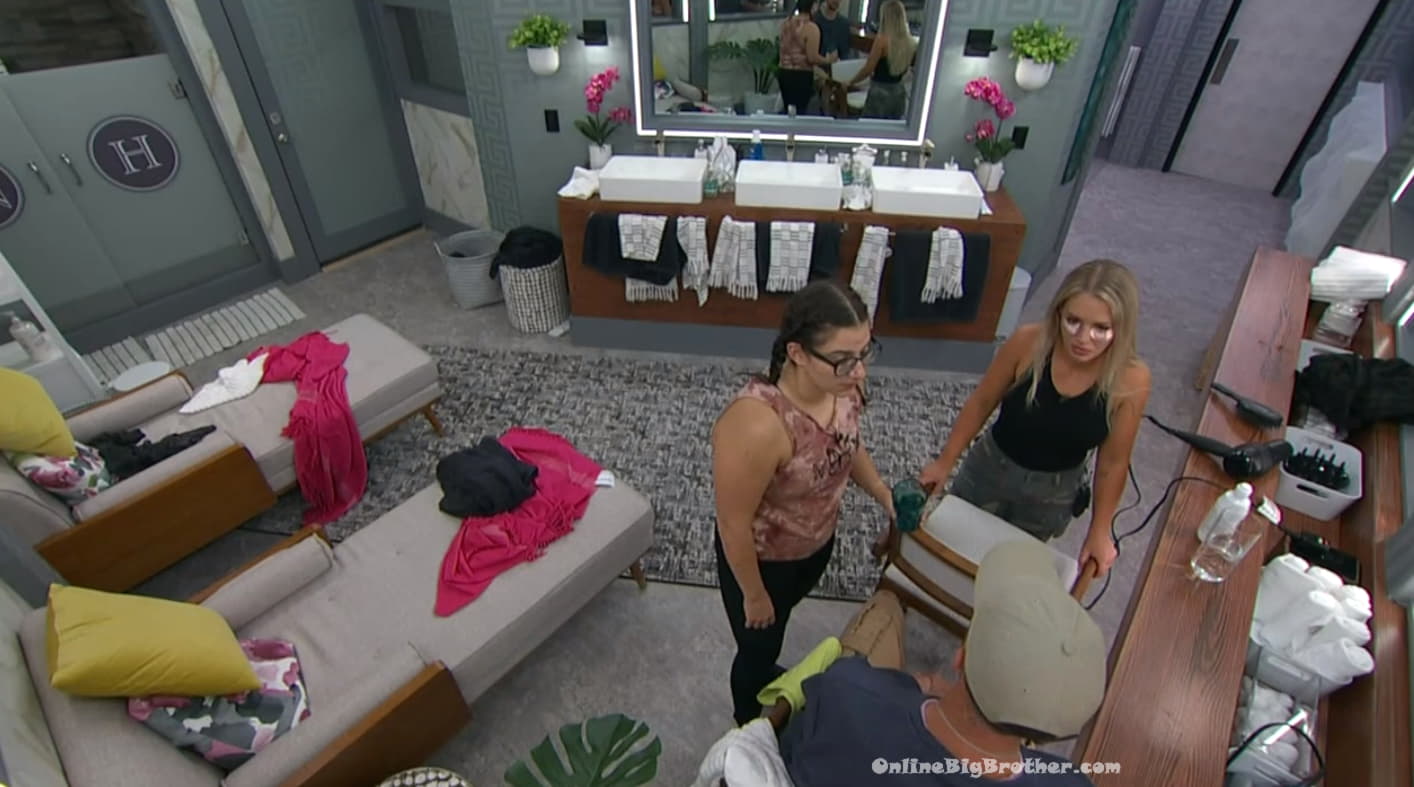 10:00 am Frenchie, Britini and Whitney
Frenchie says his conversation with Christian “told me everything I needs to know”
Frenchie – he doesn’t give a f* what I think he just wants what benefits his game.
Whitney – what he say
Frenchie – I said I will do what benefits us all.. he said it better be so and so.. I was like .. better be EH

Whitney wants to bring their teams together to go after the other teams.

Frenchie – I’m going to make a splash this week.. with this splash they will be gunning for me. If I have the numbers to make this happen I’m going to need you.

Frenchie – I am super ANTI meatheads.. they get all the prettiest women.. I’m like damn Meatheads.. I had a job and Meatheads kinda dominated that job. My part of that they dominated.. so when I spoke to him.. Brent.. Normally you got that Alpha male get away from me..
Frenchie – I just don’t want to talk game for the rest of the the day 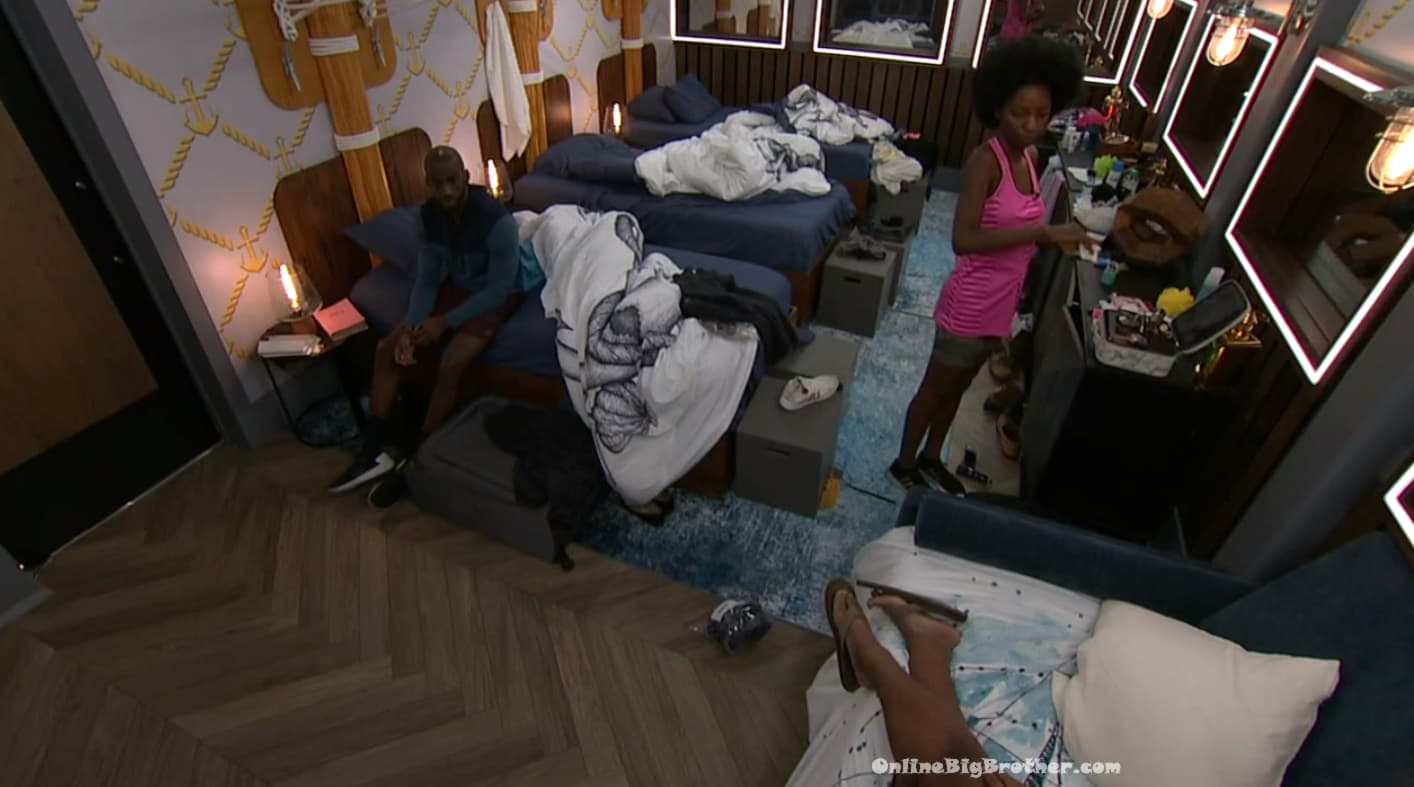 10:04 am DerekF, Azah and Xavier
DerekF brings up Frenchie calling Travis out for having an alliance.
Xavier – he’s talking too damn much..
Derekf says they need Xavier to keep an eye on Frenchie.
Azah – I don’t know if we can control Frenchie I say that because the conversation we had upstairs on the Skydeck was completely different than the conversation we had when we sat down which was also completely different than what he went and told them.. The target changed three f**ing times in 2 hours .. I can’t
DerekF – lets say he gets exposed and his team gets f***ed there’s nothing really we can do
Azah – I love Frenchie but he’s playing for Twitter and the audience 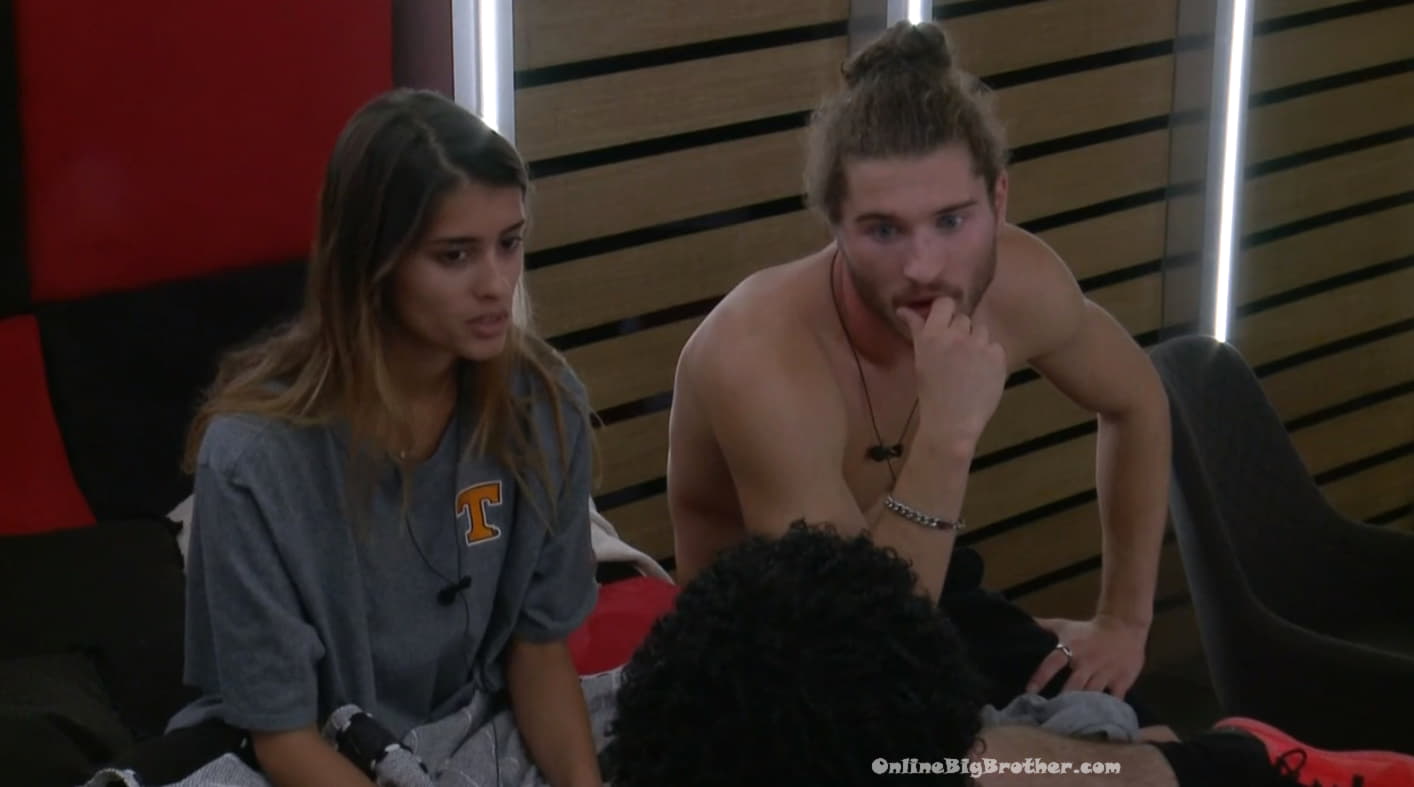 10:31 am Chrisitan, Alyssa and Kyland
Kyland saying that Frenchie is better at this game than he thought. Mentions DerekX is not the target anymore. 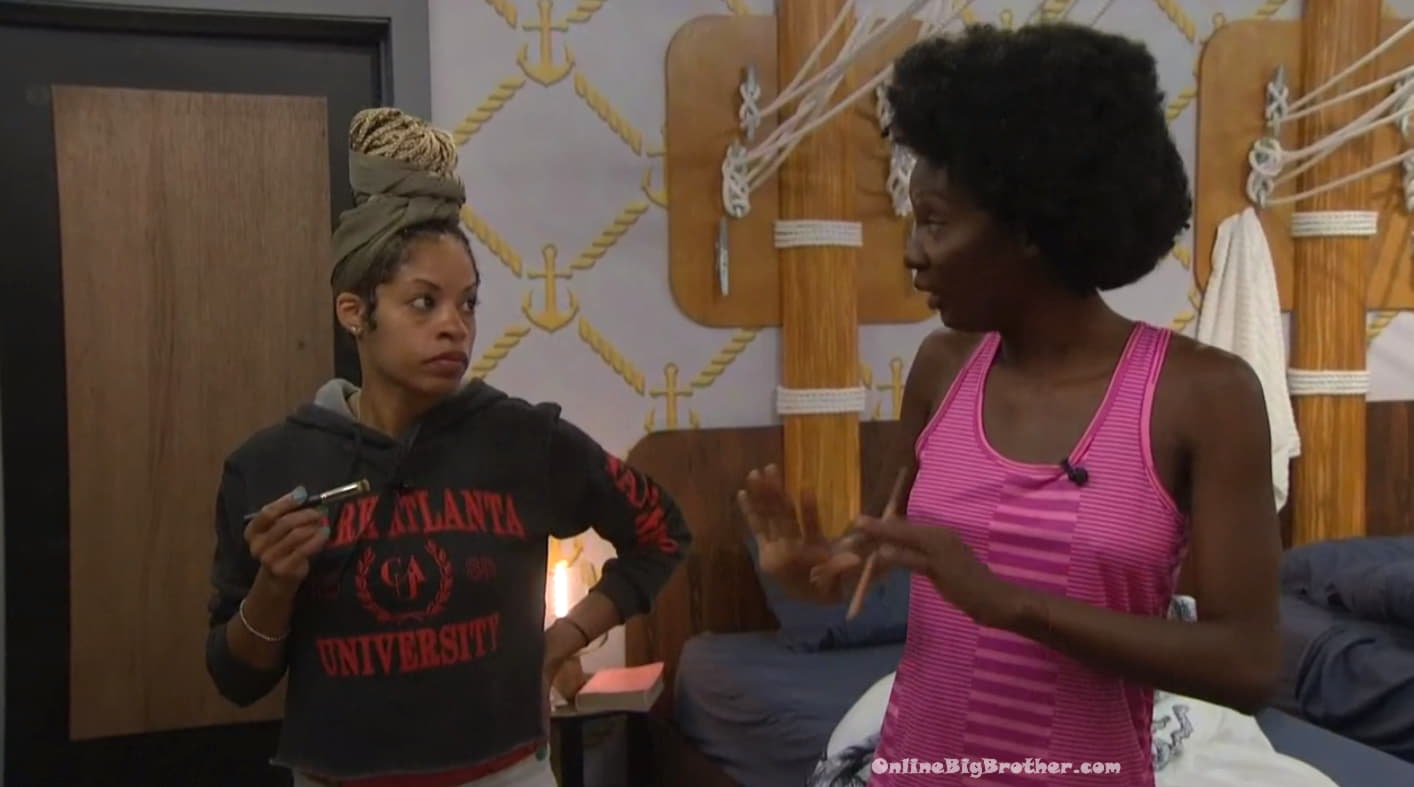 10:20 am DerekF, Tiffany and Azah
DerekF says they have to keep Frenchie grounded.
DerekF – all these young cats are getting to him.
Tiffany – he changes how he feels all the time
Azah – I don’t think we can keep him grounded
DerekF – we know that
Tiffany – I did ask him yesterday are you playing with your heart or your head and he was like right now my heart.. you do realize this is the game of big brother everyone has a story. Just stick with you how felt on day one.
DerekF – that is what I said.. he was playing with his head until this kids started talking to him
Azah – he’s playing for Twitter.. I don’t think he’s playing for Twitter but your concentration should be to make a big move ..
Azah – no your concentration should be how do I set myself up for the next weeks
Azah brings up that Frenchie was involving 9 people on his backdoor plans.
Tiffany – 13
Azah – don’t tell 10 people about your plan
Tiffany – I went to bed and I don’t know where his head is at
Azah says one of them need to be the last person to talk to Frenchie before he makes the nominations
Tiffany says it might be too late they already called him into the Diary room.

Azah says she likes Brent but wonders how close him and Whitney are.
DerekF – oh they’re working together 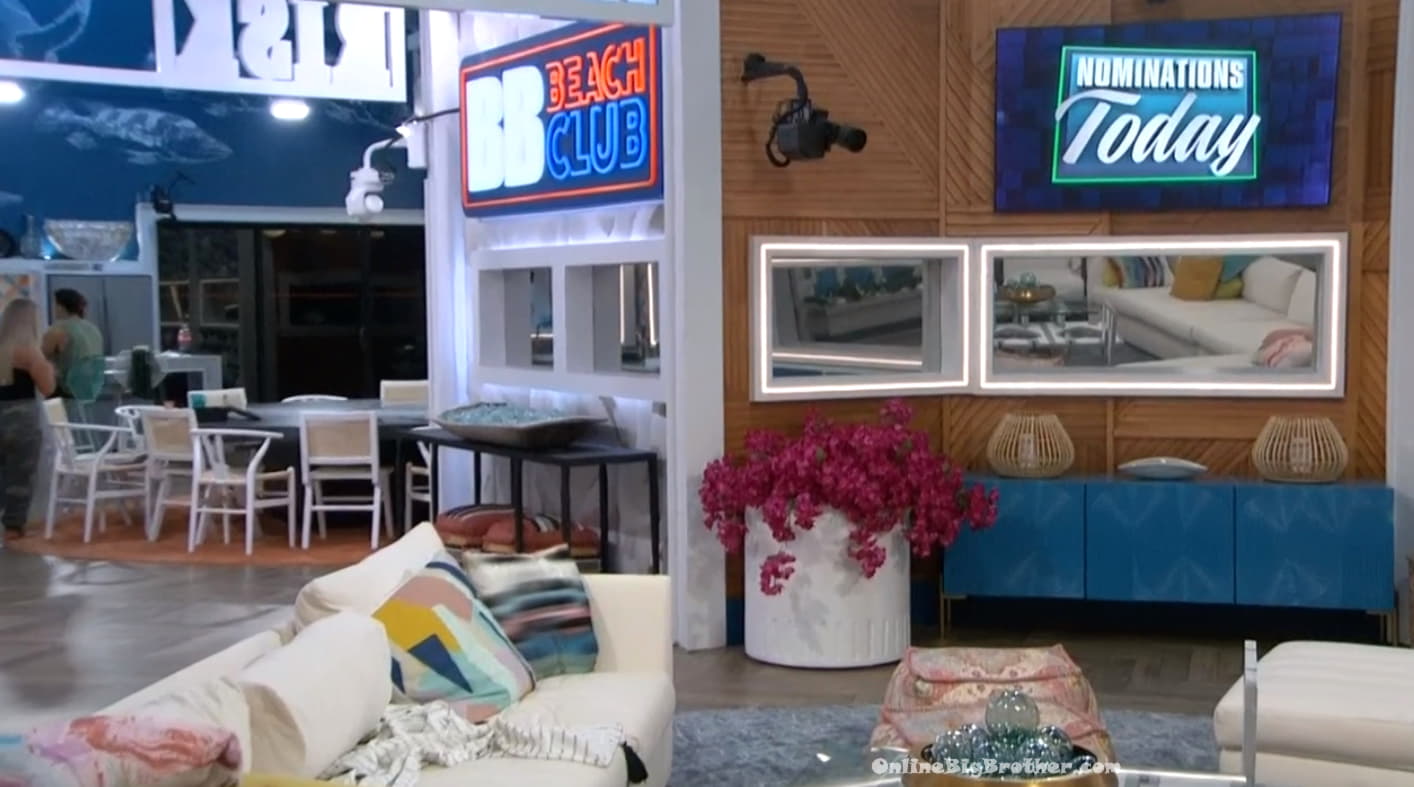 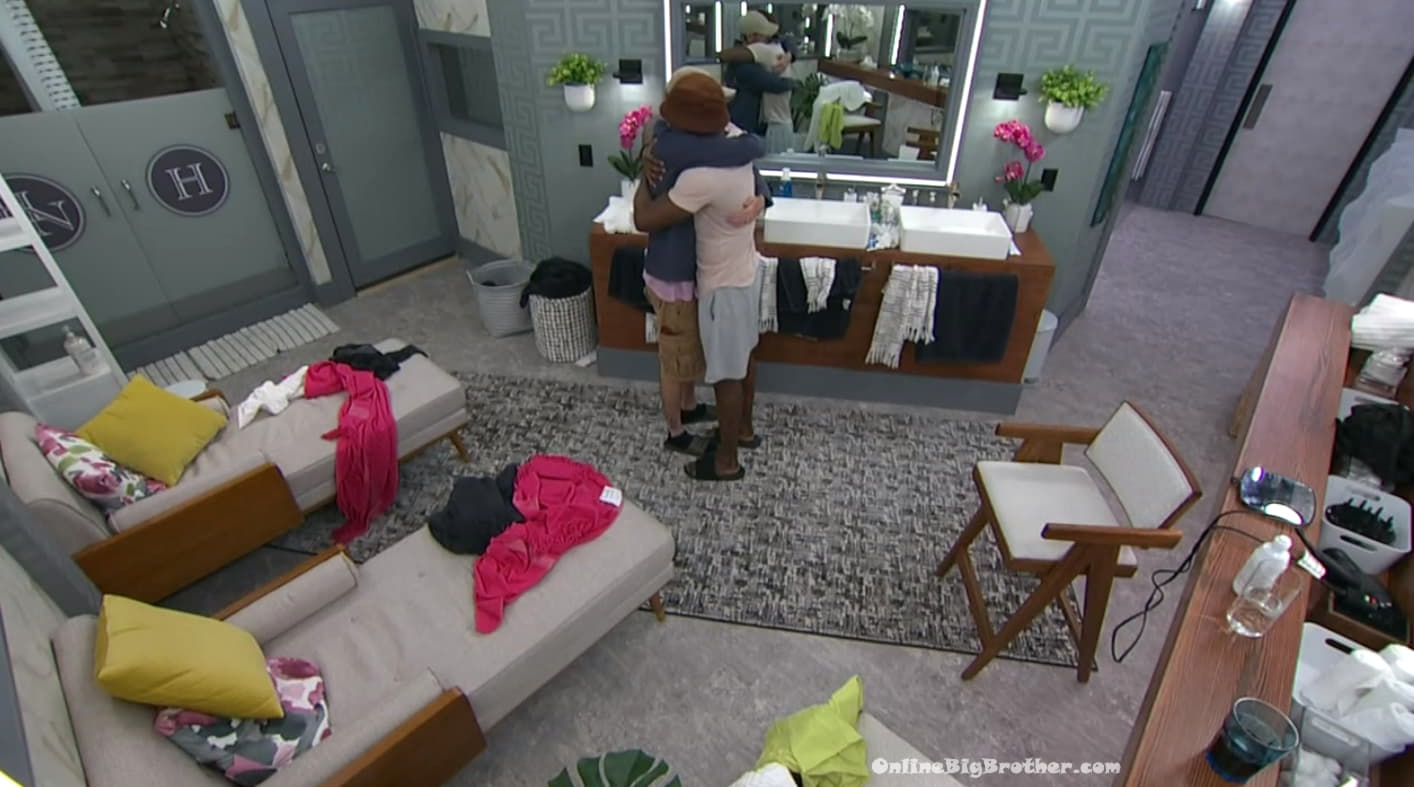 Frenchie comes out of the Diary room crying
Frenchie – I appreciate you you’ve been one of the only people in this house that haven’t bullshitted me.
Brent – I am a man of my word
Frenchie to Xavier – you to man
Frenchie – people are lying to me it’s blatantly obvious I’ve been holding it in for 2 days now. I see it crystal clear I look at these people smiling to my face.. this house has ears. what people don’t realize in the HOH I can hear them when they are across that hall. you can hear everything.
Xavier – the only room where you have secrecy is the have not room
Frenchie goes on about being “Done people-pleasing”
Frenchie says a women lied to him, “America is probably going to hate this”
Frenchie when you look me in my face and you lie mulitple times.. I got you whatever you need since day one I wanted to work with you .. And I pull you in and I’m like alright.. when I give you my word and i tell you this is OK we’re on this level I’m going to give you everything I got. If you are on the block I”m running for the veto cause my ass is on the line
Frenchie – I play a different game than most of these people are playing.. 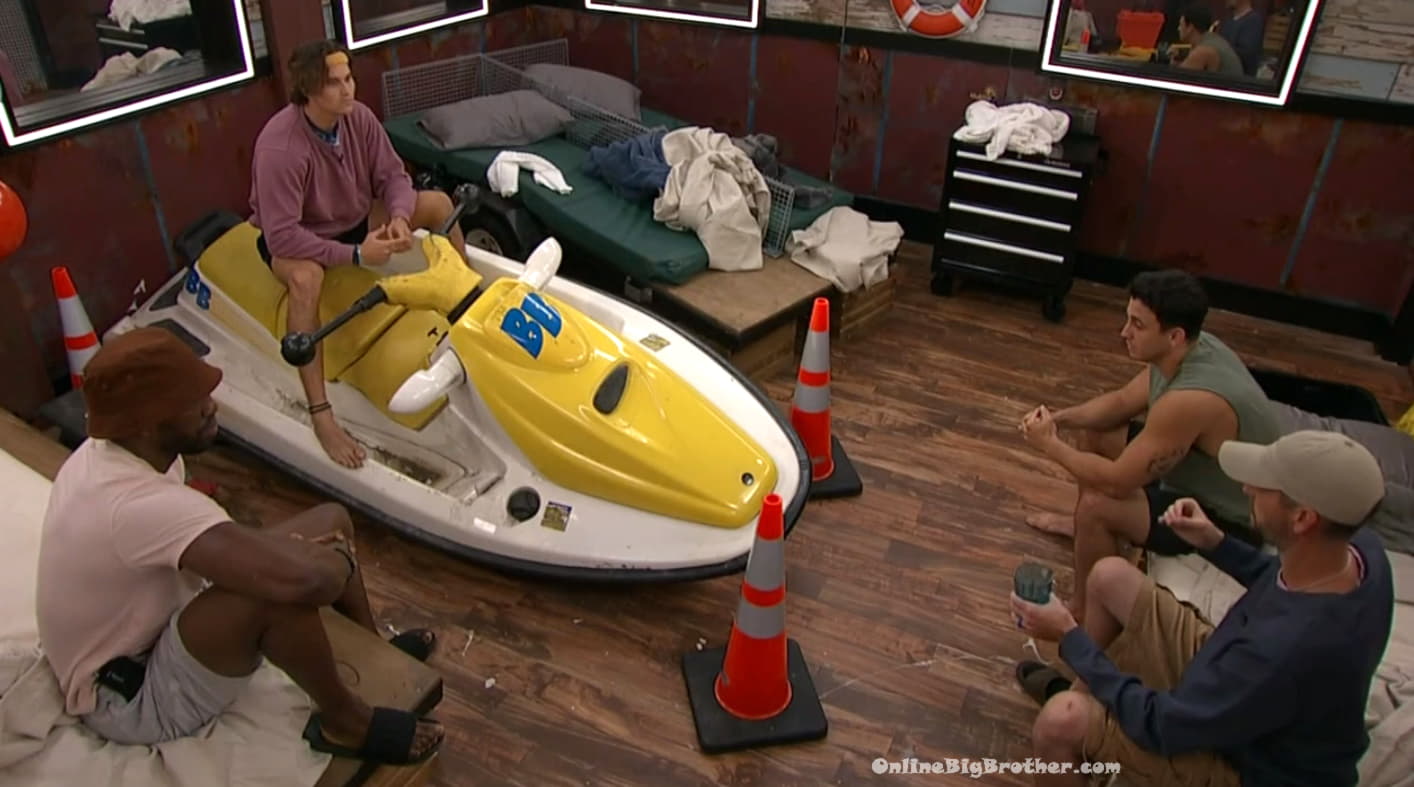 11:24 am Bro summer …
Frenchie going on about pre-judging ‘meatheads’ then brings up telling a group of people he needed a pawn and nobody offered.
Frenchie – I don’t want to get HOHitis you know what I mean to act like the big man on campus.. I haven’t
Brent brings up how Frenchie “called dibs” on Alyssa because she was his type.
Frenchie – If I see someone playing super hard I feel like I need to catch up
They talk about doing these bros meetings every once and while so that they can help each other out.
Frenchie says getting Alyssa out is the next best move other than getting Christian out. He’s sending a message getting the person he’s closest to out.
Xavier – her connection with him is more than one-sided.. He’s feeling her she’s just trying to be friendly with everyone
Travis mentions Tiffany as a possible target and the other three say no way. 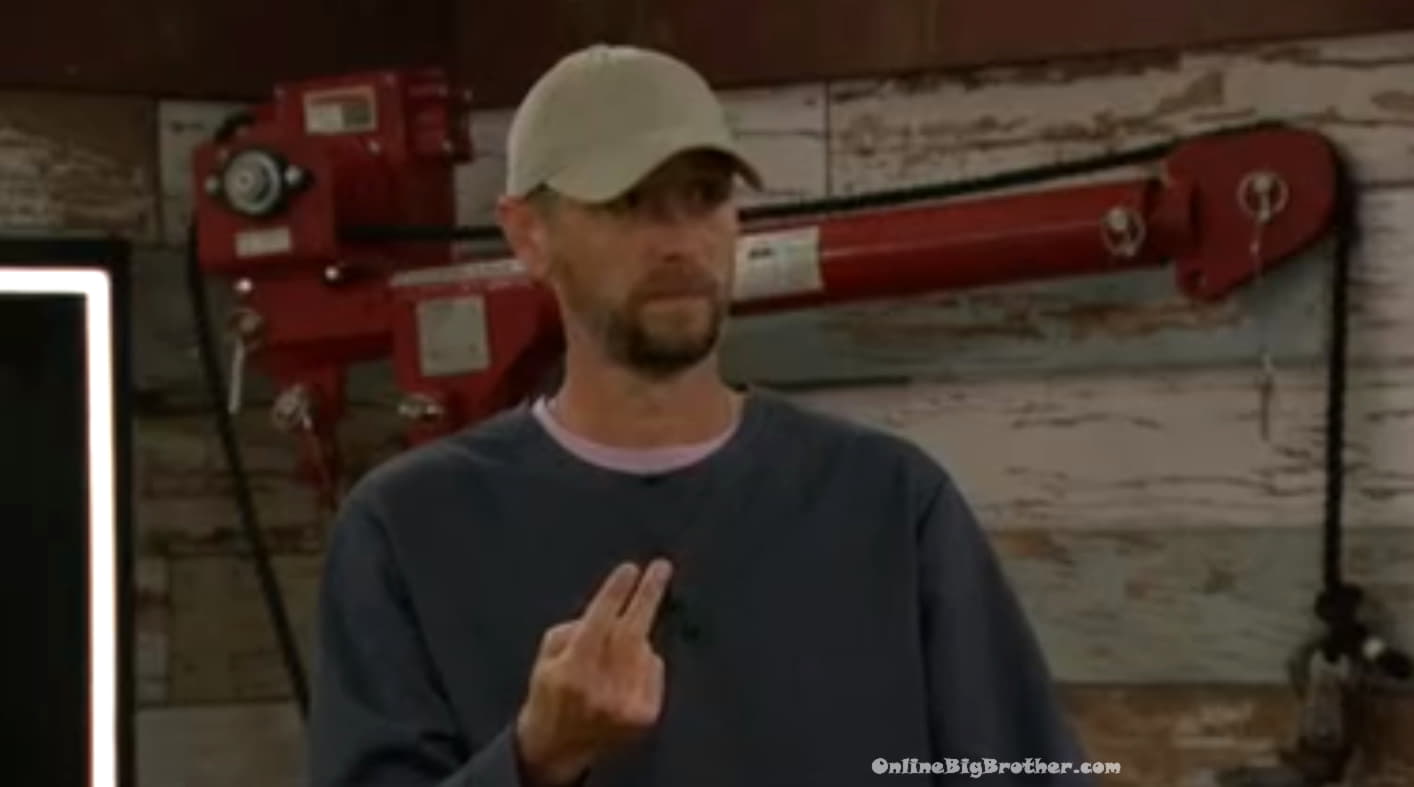 Frenchie – Britini that’s the reason I know half of my list is because of BRitini. Every night she’s coming up giving me a full report.. you would have britini, BIGD and Azah.. my team is working very well together.
(LOL Frenchie wants to form his day one alliance with this day 2 bro alliance)

Their bro meeting is over. Xavier is going to talk to Alyssa and see if she will distance herself from Christian. If she will or is positive about this Frenchie will recalculate his nominations. 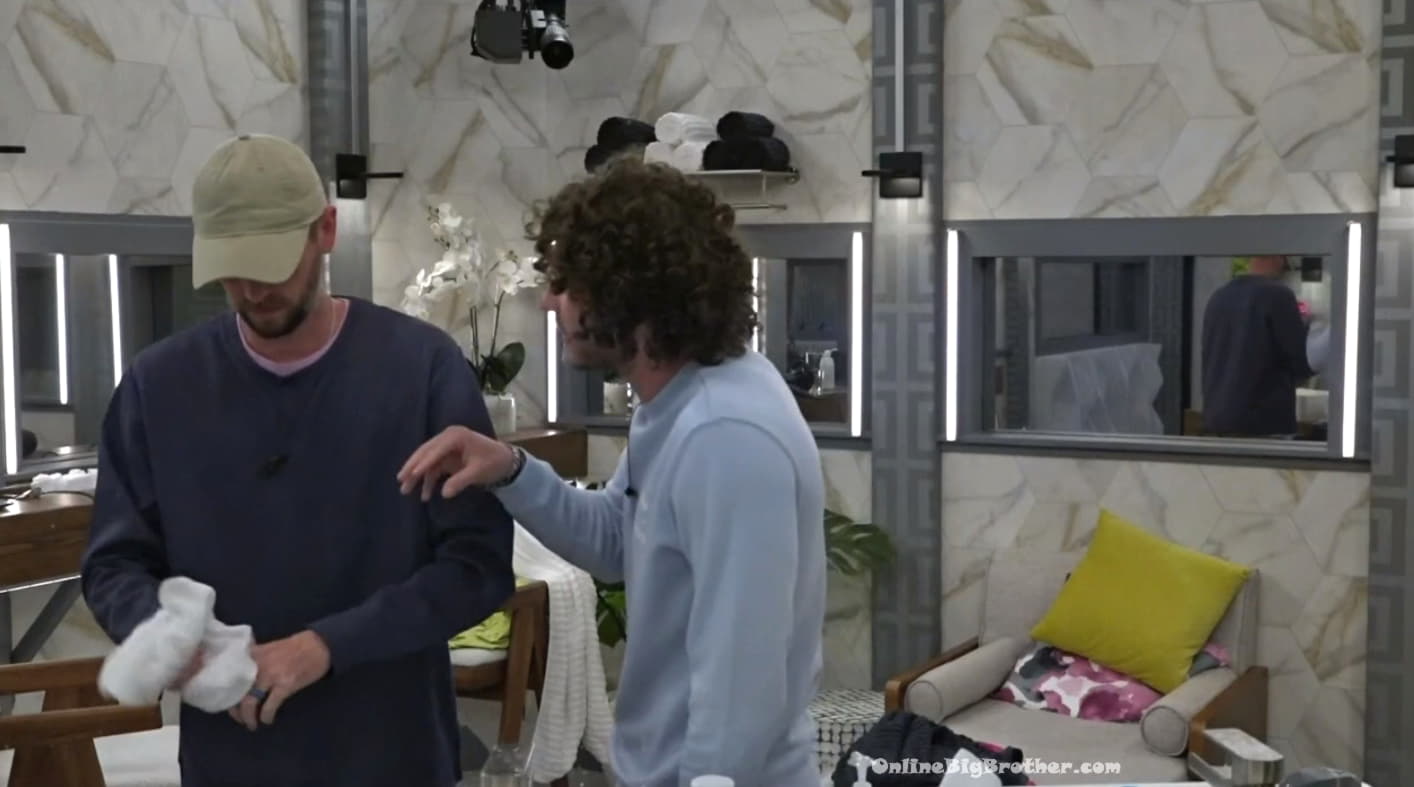 12:19 pm Frenchie and Christian
Christian – you have to make them now?
Frenchie – yeah ..
Christian – is it the same plan.. same target
Frenchie – eventually yes.. just not right now
Christian – not this week
Frenchie – ohh yeah no.. this week..

I’m waiting for a house meeting…plus this reminds me of Vanessa but without the strategy. I’m going to have to spend some time actually watching some of this season, it might be an entertaining mess. I’m staying positive.

I am hoping we get more than one group able to do anything. Many of the last few seasons have really only had one group with any real power and the rest of the people just looking to placate “the house”. I’d love to see multiple smaller groups fighting for some power each week.

Frenchie’s alliances are too confusing. I think he has one with Tiff, Xavier, Sara, Big D and Bitt and Azah? But that they have all decided he talks too much and is off his rocker.

But then there are the Butchers and I have completely lost track of who is in that one. I think it has Xavier, Big D, Brent and Christian? But isn’t he nominating Alyssa because she is close to Christian?

Kyland better not get booted by this madman..

I feel bad for Alyssa as well but I’d rather she went than my # 1 guy.

Interesting nominations, wonder if Kyland volunteered to be a pawn.

will be interesting to hear French reasons for nominations

Frenchie totally shoulda left his meathead trauma at the door. Way to start total chaos by telling everyone everything that comes to your damn mind and painting a massive target on your back.

I think Mr. Frenchie is in way over his head……just saying.

Devin would be proud

Frenchie has lost his damn mind. Just shut up and quit telling everyone what you’re thinking. Then again, this is feed’s gold. Just keep talking Frenchie. You are going down in week 1 BB history. Can’t say this isn’t entertaining.