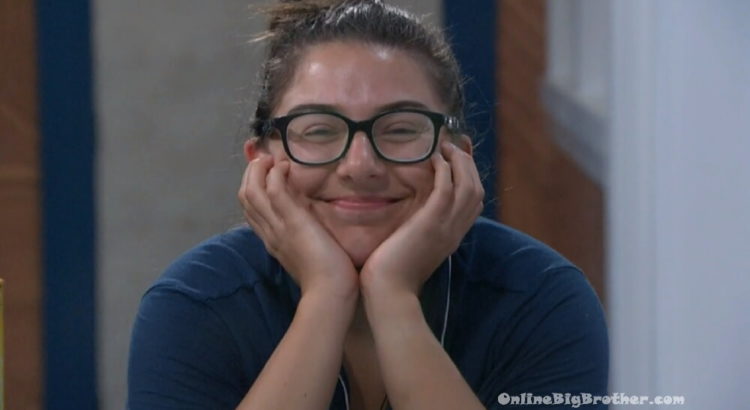 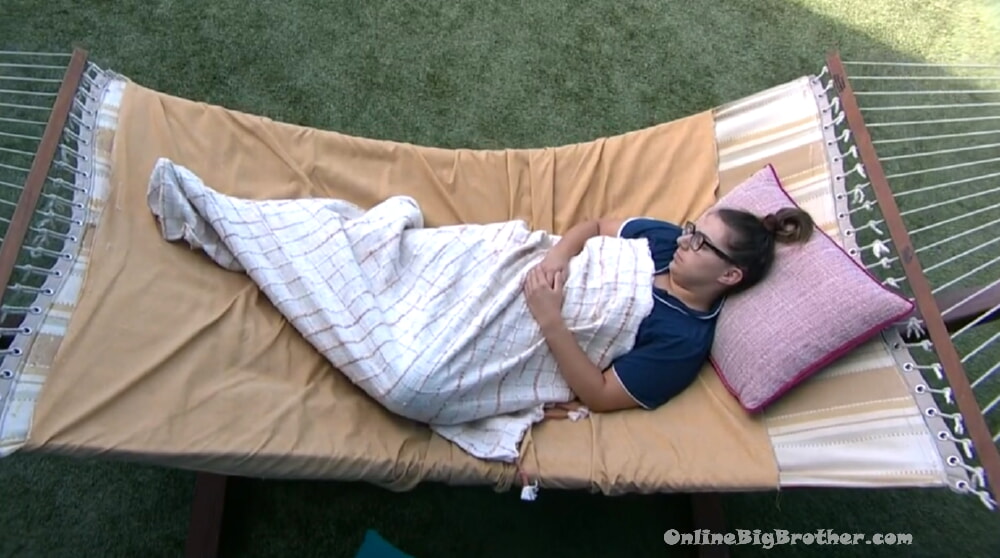 10:16 am Brit on the hammock preparing for her talk with Xavier
“Someone else from his team can sit up there for the rest of the week I don’t need to anymore”
“You need to clarify with everyone your speech meant absolutely nothing”
“I served the due diligence he’s now locked up on the block”
“I’ve done my due diligence I can’t make the promise to him that if he pulls me down off the block I would give him safety next week if I get it. To be honest with you I can’t promise that. Or Can I?”

10:23 am Kyland, Claire, SB, DX, Hannah
Kyland saying tonight there’s no reason for them to stay up past midnight.
The drawer falls apart on Claire
Kyland – did you break the drawer again
Claire raises the piece in the air “Pshcyical threat this is me in the endurance comp.. I’m going to tear down this wall ”
they laugh..
Feeds cut..

11:00 am chit chat and workouts..
Britini is talking about her baseball team. The coral room is giggling away about random topics

11:20 am After 20 solid minutes Britini has stopped talking about Baseball.. She tells Xavier with her IBS it’s difficult for her to digest Apples. Just a bunch of random chit chat. 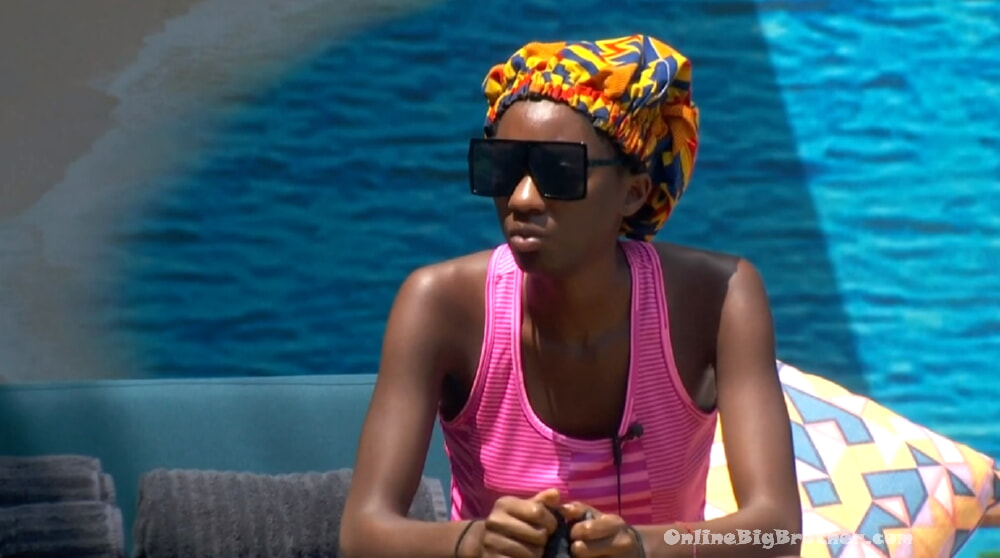 11:28 am Azah and DerekF
DF – Brit is not going home
Azah – Brit isn’t going home but the psychological of that is terrible. Okay put her up as a pawn why make some stupid a$$ lie and then on top of that I was talking to Tiffany yesterday she’s insisting that Brent doesn’t suspect.. Play him respectively man.. this dude is not dumb he knows he knew in the beginning.. like why?
Azah – he’s not dumb he knows what this is about.. be respectful to the man at least.. let him know BRAH you’re a great competitor.. not some stupid a$$ lie
DF – I don’t know why but it could be
Azah – it was to benefit Kyland that’s what it was for. How did that benefit C
Feeds flip to coral room chit chat.. When we’re back to the conversation
DF – When I get a second with X I’ll say your boy is been getting a little Suspicious of me, You NAssa talking and I’m going to go make his boy calm down.
DF – Hey tell your BROTHA to reassure him whatever conversation you need to do
Azah – he knows right now he’s the target. Tiffany thinks he thinks he’s not going home. I think he knows he need to do what he needs to do..
Azah back to asking “why we have to do this whole big show that affects people’s game in the process including people in our own Alliance”
Azah says them putting things “that aren’t true out there” affects Brit’s game and Their game.
DF – what did you want him to say?
Azah – he should have put Britini up in the first place..
Df – if he would have put up Whitney that would have blown up his whole game.. why can’t you see that? They cuddle together they flirt with each other. Why would he throw up Whitney.
DF – he will only throw up Whitney if it’s the last resort and Whitney came down.
DF continues to explain to Azah why Brit went up. She’s not getting it.
Azah – this is my question if Whitney wants Brent out why couldn’t he tell Whtinte I’m going to put you here as a pawn brent goes home.
DF – I dunno that’s him and her’s relationship
Azah – that would make complete sense..
DF – I get what you are trying to say but in this game you can’t blow up everything If Whinety wins HOH she might be upset that X put her on the block what does that mean?
DF – he’s on the block. he’s also looking out for the benefit for himself
Azah – I would like a heads up we were left completely in the dark
DF – he did tell us
Azah – X is the only person that was up front to us, the rest are playing games
Azah – I’m not upset with X. I am about Ky and Tiff.. I’m not upset with Tiff actually what I don’t like I felt played in a sense.
Azah says she now doesn’t know what is true Tiffany and game Tiffany
Brent joins them. 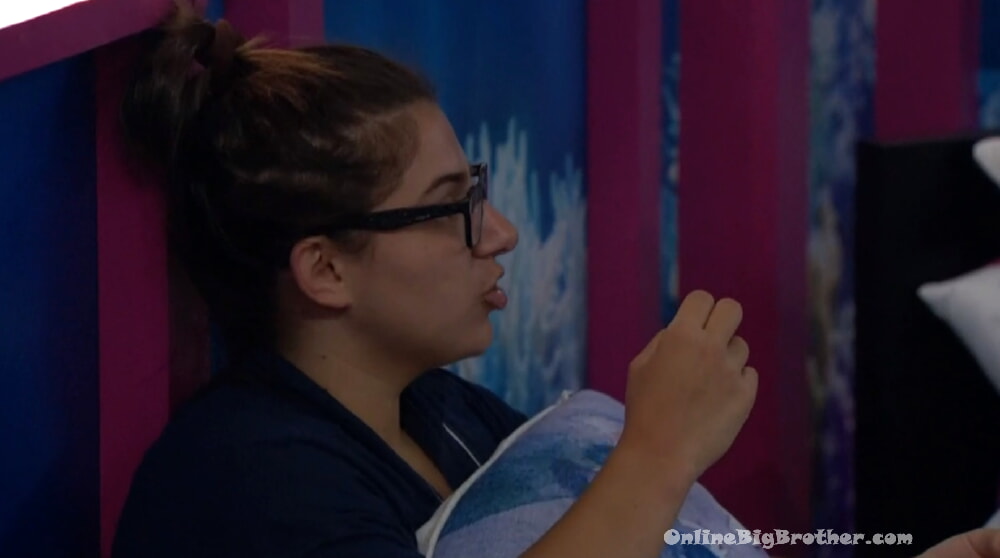 Brit is doing a great job solidifying her spot on the block next week!

No she did not Derek and tiff cheated. All both stringing along through ing comps
I hate them both

Being on the block probably sucks even if you know you’re safe. Britini’s antics could easily be taken as not having as much trust in her allies as she says or at least that would be what I would say if I wanted to separate Britini from the group. If I wanted to work with her, which these last two weeks suggests might not be easy in high stress situations, I’d talk to Britini about how putting people on the block means they are expendable.

Britini’s problem is that she’s showing people she’s going to be hard to work with unless things are going her way. This might make it simpler to eliminate her before someone else is able to use her to take a shot. She may prove to be as unreliable as Frenchie.

I agree.Having seen the Wild Card Comp, Britini had no reason to complain; Derek X and Tiffany had every right to do what they did

Yes. Britini should take a page out of Alyssa’s book. Remember how well Alyssa handled being on the block?

I hate everyone in this season. What a bunch of wheasals. Tgey all made Britney lose wild card dang Derek and Tiffani.
Shame on them..
Hope they both go home get evicted and they think Brent is bad should had kept frenchie.

Britany had the chance to knock Derek out if she was just better at math. She blew it. She could have given him 13.

Azah is a major disappointment… She was my top girl pre-season and now I don’t care if she is cut pre-jury.

She doesn’t understand the game and that’s just annoying.

Tiffany has easily replaced her as my top girl. She knows the game, can win a competition, isn’t emotional AF, and is very funny. I like those type of players.