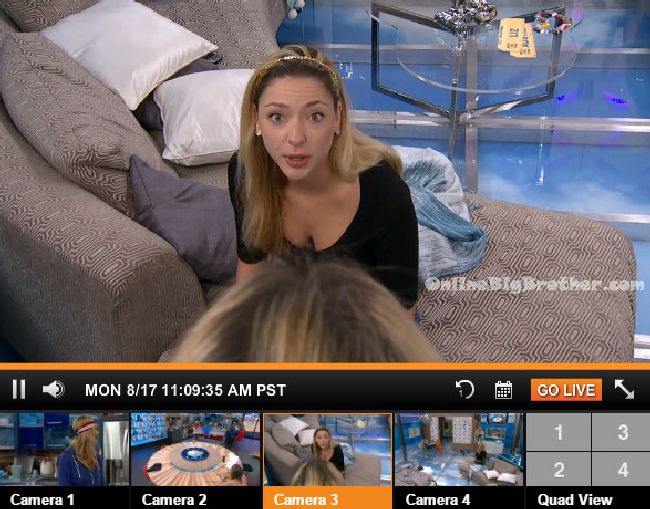 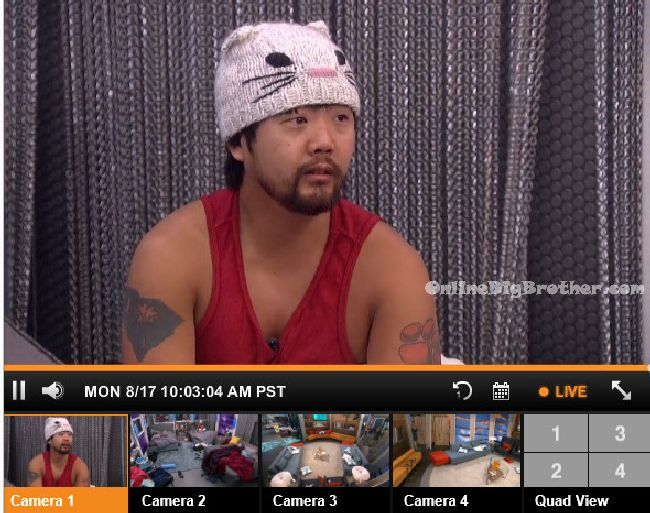 10am – 11am Big Brother wakes up the house guests. In the bedroom – James and Meg are waking up. Meg says she’s happy today. They complain about the wake up music and wonder if it was some kind of joke. James says that music was so old they knew we would connect it you because you’re grandma. “Strangers in the Night” Meg comments on how they (production) are getting ready for the veto meeting. In the havenot room Becky wakes up Steve and tells him the veto meeting is soon. All the house guests are up getting ready for the day and eating breakfast. They talk about how they think the main reason Shelli was pissed was because Clay was going back to Texas and she was going to jury. Liz – do your thing, YOLO! ..You only live once! 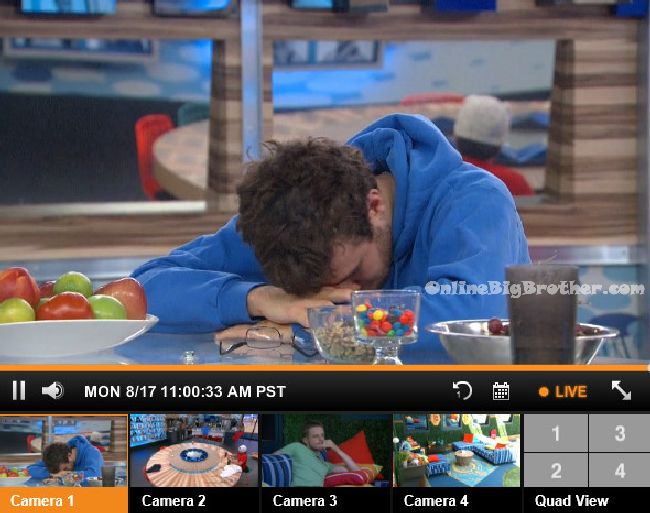 11:10am HOH room – Liz and Julia are talking. Liz practices her speech. This week is especially hard because we’re been having so much fun together, however, like I said before the reason you guys are on the block is purely strategic. You both are some of the best competitors we’ve seen throughout the game in the competitions. I firmly believe that either one of you will definitely be coming back from jury so with that I have decided NOT to use the power of veto! Julia says that’s it, perfect! Liz continues to practice her speech. Julia says why not later today we get her (Becky) up here and get the truth out of her.

11:20am Big Brother blocks the feeds for the power of veto ceremony… Liz is not using the veto. Johnny Mac & Becky will remain on the block and one of them (Becky as of today) will go to jury on Thursday.

See what they can’t show you on TV!

Watch the next week of the live feeds for FREE!

Yepp, figured as much…

They had the idea and the votes to backdoor Vanessa..But they are too stupid to follow through

If they used POV on either…Austin,Julia and the person taken off block are three votes…would not have mattered what Steve,James and Meg did,,Liz would have broke the tie,,BAMM,,,Vanessa gets zapped

Another lame use of HOH…..

I would love to see Vanessa hit the bricks, but I can’t criticize the Austwins for this HoH. They are going to be a target next week no matter who they get out this week.

Getting out Becky will leave Vanessa in the house to target them, yes. But if they had gotten rid of Vanessa, then they would have become the target for Johnny, Steve and Becky.

It didn’t matter who they got out this week. Going forward they are going to have to win comps for their trio to stay intact.

I think you are right, and this decision will backfire and one of the twins will go next week. Van is not as scary as the austwins are, anymore! Also, I feel a twist coming sooner than later. Serves em’ right!
With their logic, they could never vote Van out! Either way Van is going pissed at them. Either they put her up, or they have vote her out as they are the numbers that matter at this point. Same shit different pile. Actually, there is one difference. If van comes back in, she comes back in immediately and with a vengeance. If they voted her out this week, she would have lost connection with the house for an entire week.

I’ll have to agree … The house guests have to be starting to put 1 and 1 together to realize austwins need to be broken up hard… And it might even be when one of them gets evicted that the rewind twist is unveiled.biggest mistake was letting those twins in , longer you wait harder to split them up.

ITA the Twins and Austin should have grown a pair and backdoored Vanessa. All this “well we don’t have a reason to do it” UHM yeah wanted to back door your buddy Austin and this is Big Brother you don’t need a reason to do something good for your game. It would actually give the twins something to say they actually DID instead of just sitting back and “I knoooooowing” all day long.

One other thing Meg & Co. should have NOT listened to James’ paranoia about Shelli and stuck to getting Vanessa out. Then most likely Jackie might still be in this game b/c Vanessa’s little bitch Steve would be w/out her calling his shots.

Becky already told them the truth.

DUH Liz..If You believe one of the two would be able to win the Jury comp, then by leaving nominations the same,You just made Yourself a target..

I’m so sick of this entire cast. Not a likeable one in the whole bunch.

LIz did the correct thing. Why not use Vanessa next week for a v ote to stay safe? I hope Van puts up JMAC and Meg with Austin as the back door, especially since everyone will rat out Austin to her to stay safe. Meg won’t win the Veto so no worries on a back door option.

Why not use Vanessa next week for a vote to stay safe? Because she just passed up an opportunity to make better friends than Vanessa. James, Meg, Johnny Mac, and Becky would have been somewhat united with the Austwins after getting Vanessa out, at least temporarily (they all have to fight each other soon anyway). Instead, she alienated that side of the house and made herself an even bigger target. She is more of a threat than Vanessa at this point. She kept one “friend” (who she knows can’t be trusted) and made 4 definite enemies. Vanessa is one vote this week which they don’t necessarily even need, and Vanessa can’t truly be trusted to have their backs next week.

Becky cannot show evidence of the slightest loyalty to anyone ever. It’s a problem.

Meh (again) Why can’t BB give them wacky stuff to do. Tired of watching the make out sessions between Nastin and the twit.

Hope whoever stays wins HoH and puts Liz and Julia up using the same “strategic” speech…which would actually be a good strategy breaking those two up ASAP.

James…Go make me some rice!!!

What happened to all the exciting twist they talked about before the season started. This is getting more boring as the weeks pass by. James started some excitement and the fun got sucked right out of it. Now it just seemed to fizzle out completely. Come on Big Brother lets do a twist! We’re waiting!

Liz and the others in the house don’t get that whoever gets Vanessa out will be a Big Brother legend.

I would personally fucking high five them that’s for sure

I’d be happy if JMac won the next HoH and put up Liz and Vanessa, letting Liz know “she’s just a pawn”…

I think that hickey diverted the only blood flow that was going to her few brain cells. She’s toast.

They should make a new rule that a player can’t be put on the block twice in a row. That way you can’t wait till the next week to get rid of someone because they will be safe. No more putting up the same pawn week after week. Everyone would be on the block sooner or later. And Hoh would be forced to make tough decisions. Just a thought. Didn’t have anything else to talk about.

It wouldn’t have worked this week, but they should let the person who wins the POV choose the replacement if they decide to use it.

I also wish when someone is voted out they wouldn’t tell them what the vote tally is, just if they are going or not.

Oh sweet baby Jesus, these people are stupid beyond belief. I wish dearly that JMac wins HOH, puts up Vanessa and Liz. If the veto is won by one of the twins or Austin, you know Vanessa will be left up there, twisting in the wind. She has to go, if for nothing than the increasing aggravation she’s causing to the other HGs. But the Hydra is getting more dangerous and Liz also has to go and soon. Julia is expendable, and Austin can’t find his way out of a paper bag with a flashlight and a Bowie knife. Okay, I’m done venting.

I think Meg is super manipulative she never forgets her target but lets everyone else think its theirs. (shelli)
and she wants Johnny Mac out bad she keeps reminding people he should be a target. Her game is good. Meg is the best at pretending she is ok with you. She has made her self seem vulnerable having a disease. (my sister was told she had RA because it was in some blood work but she doesn’t suffer from the symptoms so one docs say she has it the other says until she gets symptom’s she doesn’t .. ) She really is playing a similar games as the twins but wow she is so much better no blood on her hands I am disappointed in James and Meg they seem to forget that Austwins are not their friends I hope Meg is just lying when she seems happy that the Austwins like her. If Meg and James would not have convinced Jackie to not go with Vanessa Jackie would still be in the game. Meg and James are acting stupid but Meg still looks innocent everyone thanks James is the head of that snake. Meg looks like she is only taking revenge for her poor friends so that maybe her game to play the vulnerable harmless fun loving girl. I’m giving Jmac a pass because I believe that production has hurt his game by calling him so much when they know Austwins and Meg and James are getting so jealous. I feel like Jmac is a normal guy(not a wanna be actor, wrestler, or person striving to be on this show). I would have a beer with him. That being said he needs to do something different LIE to these people. Austin has already figured out that Jmac is loyal to a fault that’s why he asked Jmac if he could lie to Vanessa his answer ” to her I can”. We get it your a good guy but these people aren’t it is easy for them to lie(Dr Will) Jackie needs to come back:( Austwins cant win. eeewwwwwwww I have to say I stopped watching the feed lately cause those cuddle with Austin and liz are ick and Liz and Julia can be annoying sorry