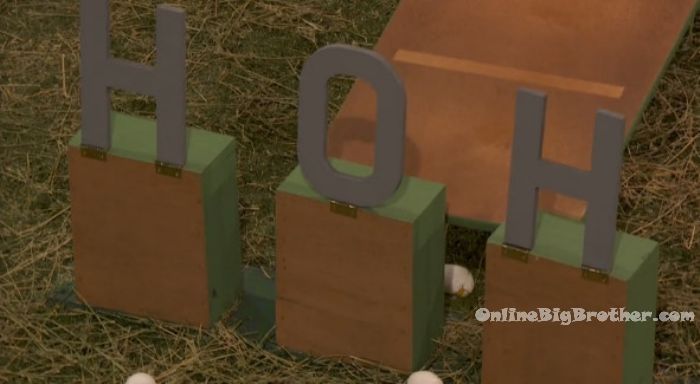 Watch the next week of the feeds for FREE – 1 week Trial! 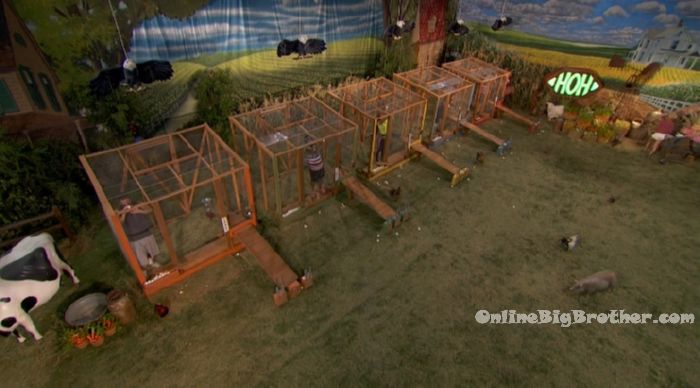 7:50pm The live feeds are showing the HOH competition. Corey, Victor, Natalie and Paul have all knocked down the “O” in their H – O – H. James still hasn’t knocked down any of his. Nat says this comp is egg-xhausting. Corey goes for his “H” and gets it. Corey only has one “H” left to get for him to win the competition. Nicole says good job Corey, James, Paul, Natalie and Vic. Victor knocks down his second “H”. Soon after Natalie knocks down her second “H” too. its a three way tie between Corey, Vic and Natalie. They just need to knock down their last “H”. James goes for the have egg and gets it. Corey and James will not be havenots this week. Natalie says whoever wins this comp .. I will bow down to you. This is the most awful comp ever! James says EVER! Who did my booth .. they super glued my letters! Nicole refills their eggs because they’re all running out. 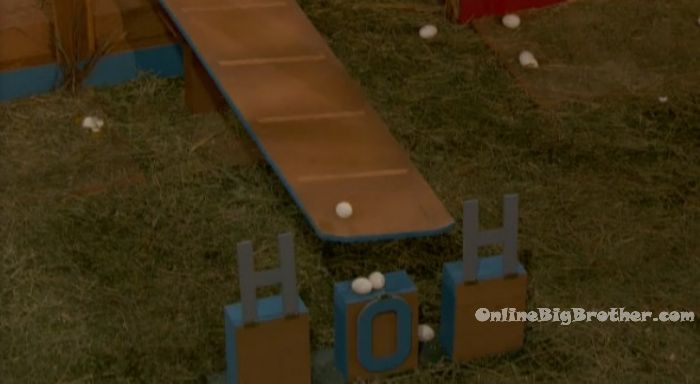 8:15pm – 8:35pm Nicole says this is hard to watch because you guys work all that way and then lose it. Its excruciating. Nat says I can’t, this is so hard. Paul gets his have egg in. Natalie and Victor will be havenots unless one of them wins HOH. Paul gets his “H”. Nicole says now its a four way tie between Corey, Natalie, Paul and Victor. James finally gets his first letter. 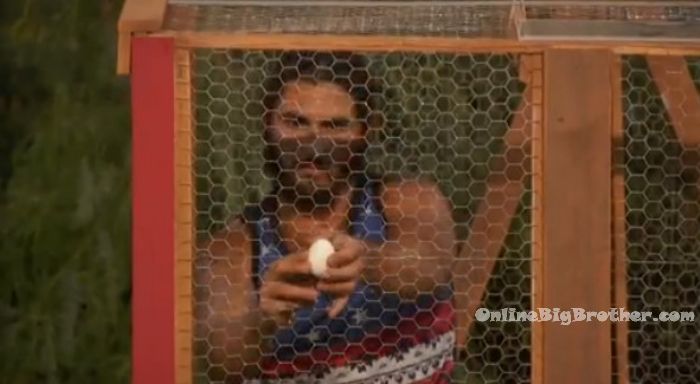 Victor tries again and gets his last “H”

Natalie would be havenot but she has the never not pass so no one is a havenot this week. 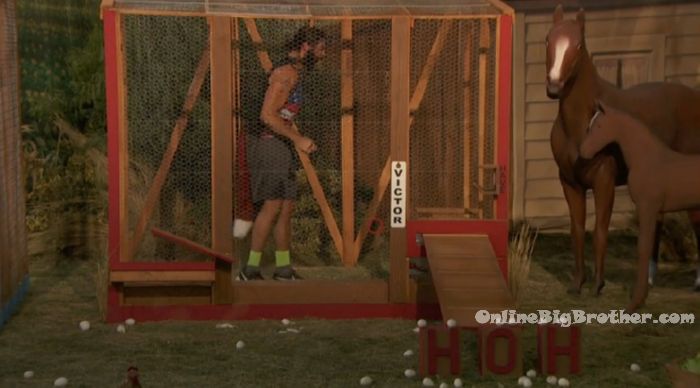 Show your support by making a donation.
Donations support this site more than anything. If you dig our spoilers please find a way to support us.

i bet she does!

How the heck does Nicole breathe with that nose??? Can she win so she can get plastic surgery please? I can’t stand her hair, nose, voice, co-dependency, male validation issues. I will stop watching if she wins. She has got to be in the top 5 of the most hideous houseguests.

Michelle is a super fan but didn’t know that she had to go to the HOH to campaign when she is on the block? More like a STUPID FAN if you ask me….

A photon walks into a hotel. The bellhop says “May I take your bags sir?”. The photon says “No, I’m travelling light “. A joke. Just like this season. Ha!

Did James throw this comp?

No I think he just sucks at it …

After the tantrum Meech threw on her way out Nicole is still somewhat good with both sides, so if Corey wins(long fingers he just might win), they can still choose a side…

If Corey wins his best move moving forward get Ridd off Paul or victor put up both of them paul and victor or victor or James ..best move for his game get out one of those beast

Nicole and Corey need to go! They have done nothing all summer but lay in bed!

I agree. and Corey is just using her anyways.. she is such a whiny biotch! she is so 2 faced!

I hope Victor wins and nominates his traitors: Nat and James.

That’s likely to happen. If Nat or James wins veto, that’s when it will get good. Vic probably wouldn’t put up either Corey (gave him 5G) or Paul, so maybe Nicole will go up. Nicole could definitely be at risk this week.

I hate this comp.

I feel so bad for Corey. Nicole is so mean to him. She’s cheering on Vic for the Hoh comp and is shitting Corey for being slow. That girl is something else. Give the poor guy a break he’s been a have not almost all summer. He looks like he’s about to die, you could at least comfort him. She really likes to emasculate the men she’s with. I can see why Hayden dumped her with all that naggimg. She never appreciates anything Corey does for her.

If Nic is cheering Vic, bet she is hoping he remembers it when he choses who goes on the block…hope he doesn’t allow nic to choose for him….Stay close Paul, so they can’t manipulate your buddy. I think Corey is ok with her cheering vic, cuz he knows what her intentions are as far as surrounding herself with allies. Plus, Corey probably thinking yeah, he’ll use that to hold over her head when this is all over so he can party with the boys and break free of nic finally lol

Poor guy?? As if Corey doesn’t get enough attention in his life lmao

Yes! Nicole has nagged the poor guy all summer. He just sort of laughs it off. He knows it’s just a temporary thing, anyway.

How did Meech get on the board so quick?

Come on Nat. Vic and Paul need to go on block!

First and second place winners are unable to win AFP.

An Apple a Day
Reply to  Brad

That was one of the most intense HOH comps in BB history!!!

We’re in for a good week… Way to go Vic… can’t wait to Lames and Nastalie squirm on the block!

James sucks at life and Comps

James has never won a mental comp and you see how useless he is at other comps also. Anyone that thinks he wasn’t trying tonight is a delusional idiot.

Just send his ass packing. He ruined most of the season but the end game will be great without Lames!

Clay
Reply to  James sucks at life and Comps

I wonder if James is going to pull himself aside 2 hours before the show next Thursday to break the news to himself that unfortunately he will be going home.

I secretly want James or nat to win – since they are now the underdogs. I want to flip the power of the house, I want whomever wins the $500,000 to have worked for it.

Is this a joke? When did James “work” for the 500k?
When he said he wanted to “go with the house” for the 1000th time?…
I guess we have different definitions of work.

Woo Hoo! Vic won! Can’t wait for the fireworks from Nat and James! I think we will finally see where James’ head is at, play the game or throw it away for “love”.

Well I guess the next few weeks are predictable as far as who is going…James then Natalie. If Corey had won, I might have thought things could change, but can’t see it happening with Vic winning. Not sad in who is leaving, just wish there would be a bit more excitement. I guess all I can hope for now is that Vic cuts Corey’s grass. I am positive he has a huge crush on Nicole right now. He cannot keep his hands off her.

Another boring week while we wait for James to die.

I love Vic – but I was hoping for nat or James to win as they are now the underdogs. Vic is pretty true to his word so I think nat and James will go up, unless Paul convinces him otherwise and I don’t think he will as he appears to be mad at nat & James. Heres to hoping nat goes home – cause I love James. Nicole will keep James over nat unless James tells her otherwise and if he does I will be so mad because he has a daughter to support. Corey will vote with Nicole so heres hoping James stays in the game. Fingers crossed.

If Paul & Victor are as smart as I think & they think then Corey & Nicole will be on the block. They’re clearly more dangerous than James/Natalie. Paul/Vic are going F2 if they take out Corey or Nicole this week! In my opinion, Paul/Vic are the only 2 deserving of winning this season.

I’m so glad Vic won. Please get James out.

Thank goodness Vic won, time to get rid of James with him gone Nat is a sitting duck. So glad they finally got rid of Michelle, I don’t think she could of been any more childish in her speech and throwing Paul’s floaty to the audience.

Now another boring 4 against 2 for 2 weeks.

Good for Vic…but him winning is worst case scenario for entertainment.

No way he doesn’t put up James and Nat, who of course will just hide. James will think he’s got the vote and his gut will tell him veto doesn’t matter and he will be evicted…but all week he will frame it like he’s being chivalrous for Nat, not wanting to hurt, so his Julie interview will be just dripping with bulsl*t…

For those who said Nicole was making a mistake voting out Meech… Hmmm looks like a pretty good decision to me now that Vic won HOH.

James goes this week, hopefully. Although it might be kind of fun if he wins Veto to see if he really does sacrifice his game for Nasty Nat. Not to mention how she tries to guilt him or tempt him… bet there might be some smooching… might even slip him the tongue. lol

Please, let’s hope Nat or James wins the POV or this is going to be another boring long week.

So glad the cockroach or the squeakytoy didn’t win. Victorious Vic for the Victory. Squash that roach.

Oooh Nat and James on the block sounds like an excellent week. Go Victor and Paul final 2…

Natalie already sucking up to Victor and being his best friends and as expected James shitting bricks. This is gonna be a good week of feeds :)

Vic is going to put up James and Natalie and it’s going to be glorious watching and hearing the shit they try to spin. It may all be true but in the end you can’t deny sending Vic home…. TWICE! Karma thy name is Fit Vic