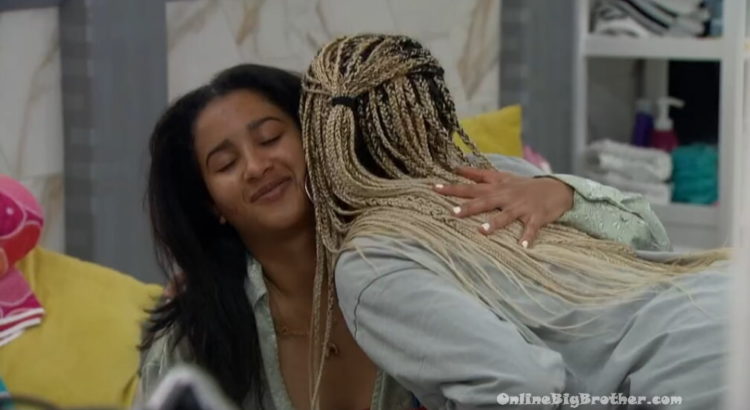 Big Brother Spoilers – Alyssa and X are nominated. Alyssa is the target. Alyssa winning Veto could bring some drama. 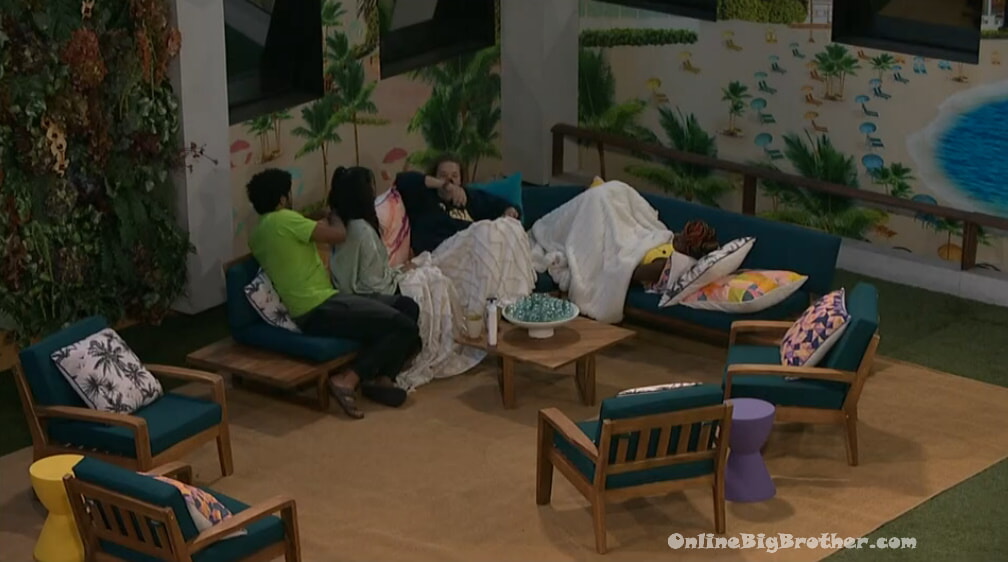 12:15 am – 12:40 am Chit chat about who will hang out after the season is over and generally past seasons. Claire and Azah have a good memory of the history of Big Brother going back to BB2.
“top moments of bad game decisions”
Lawon, Marcellas etc.. 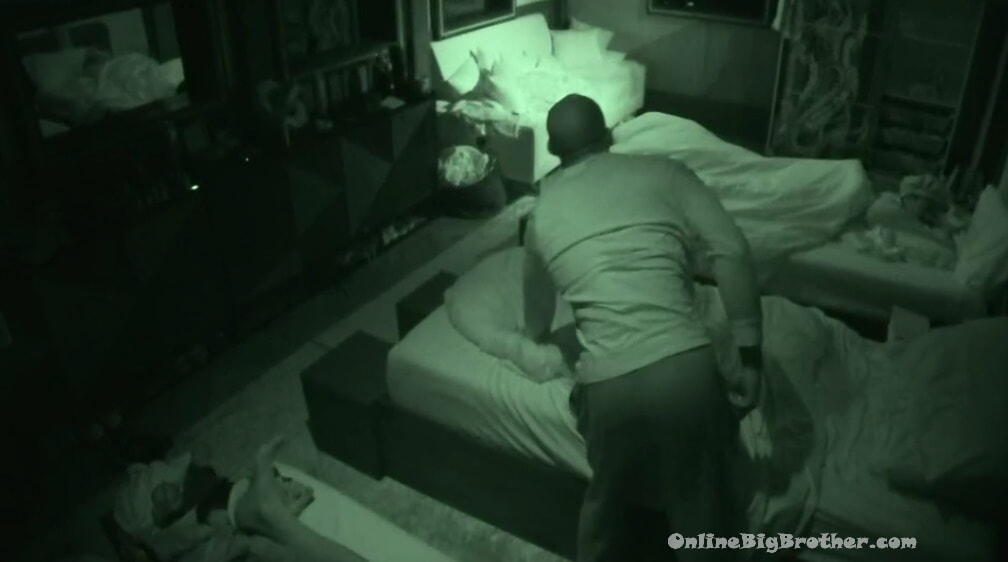 12:44 am Xavier and Kyland move into the Yacht room.
Xavier – we’re going to take this room see how it goes.. 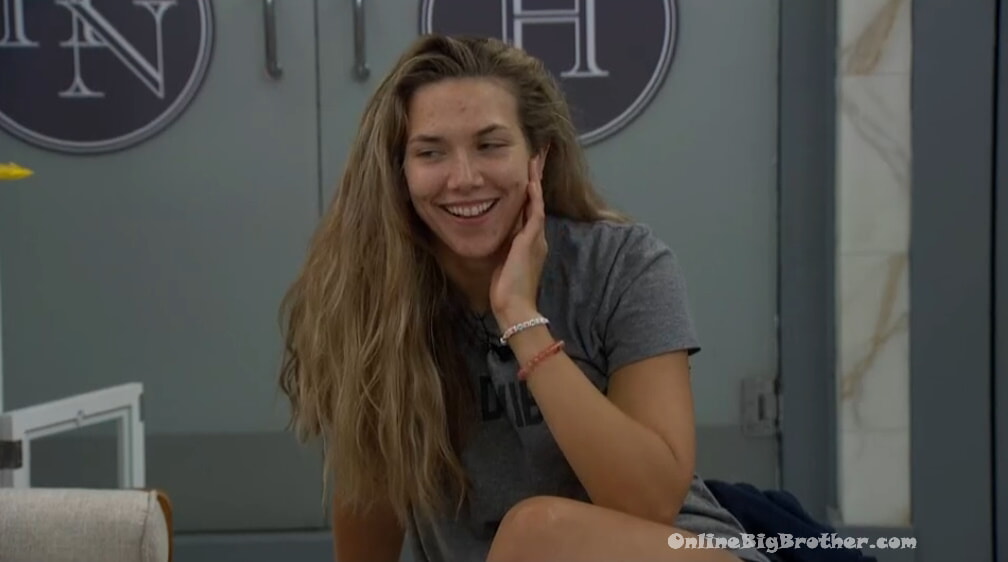 12:48 am Tiff, Claire and hannah
Tiff – I love Chris Brown.. I want a boyfriend just like that
Hanna – good music
tiff – everything about him is sooo.. sex..
Hannah – Chris brown for ma is a bit problematic..
Tiff – I like the music. I don’t care about anyone’s personal life.. none I don’t care about these people do. So when I like people I don’t want to not like them so I don’t look into their personal life
Hannah – Gotcha
Tiff – His music, his voice his entertaining the job he does with the entertaining is dope
they chit chat about the conversation in the backyard where they taled about who will hang out after the season. They mention that DX will want to bring Travis along. Ky will want to bring SB but SB won’t want to hangout with them after hearing the things they said. Brit will want to come but she’s a “Good girl” and will go home at midnight.

They talk about the ZINGs people will get.
Hannah – you kind of get a glimpse of what America sees
Claire – or what their perceptions is or whatever. Like ohh what thing is talked about.
Claire – I find 25% of them good the rest of them are OKAY..
Clair e- how do you think people will react to the zing?
Tiff – I’m going to laugh
Claire says the three of them will laugh and be fine
Hanna – I’ll pretend to be super upset
Tiff – X will be fine. Ky will be upset if they zing about SB or Shelly
Claire – he’ll be fine if it’s about him being long-winded or him being a mad scientist
Tiff – Alyssa will probably not be fine with whatever
Hannah – She’ll laugh.. or pretend to laugh then she’ll cry about it later
Claire – Azah? it won’t affect Azah.
Tiff – if they bring that camel toe up (LOL)
they all laugh
Claire – BIGD it’ll depend.. for the most part, it’ll be a laugh or it will seriously affect him in the game.
Hannah – yeah
Tiff says if they can’t handle their zings they shouldn’t be on a show like this.
Tiff asks in BB history how got real upset about their zings?
Claire – Nicole..
Tiff – she was so mad at what Bayleigh said, A couple of guys a couple of tries..
Claire – Beth was mad when they called her Old gizzard
Tiff thinks her zing will be something about going after younger men. 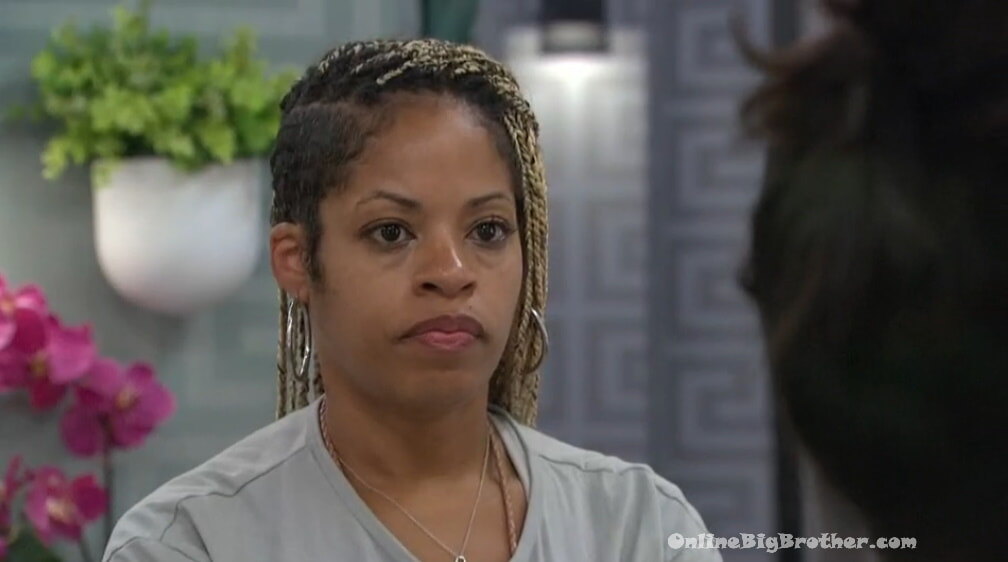 1:05 am Tiff and Hannah
Tiff – we needed to get some of those tough competitors out to win some comps
Tiff – DX would have won that comp yesterday
Hannah – he said he was really bad with motion sickness
Tiff – I thought I was too
Hannah – more than 2/3 done this game but we’ve only played a little more than half. We still have 6 evictions to final 2
Tiff is worried that Xavier told BIGD what she said about him. She saw them talking outside.
Tiff says Xavier is working with DF.
Hannah – BIGD has a final 2 with everyone besides me and you. If he has a final 2 with everyone he has a final 2 with no one
Hannah explains X knows this so he’s not going to share all his information with DF. “X is smarter than that and he’s definitely smarter than running to the person with the biggest mouth in this house”
Tiff – I don’t know how much I trust X
Hannah – I don’t know if I trust anyone in the cookout besides you
Hannah says for them to get to final 2 they need Ky and X “How do we get BIGD out that first week”
Tiff – put Azah up next to him
Hanna – three votes..
Tiff – me and you

Hannah – but if I’m HOH. If X has a final 2, Ky has a final 2 how are we going to get BIGD out?
Hannah – we can try to convince X to do a final 4 with Azah. Then if we put Azah up with BIGD X will want to keep Azah because we have a final 4.
Tiff – I think he already has something with Azah
Tiff – we have to think of a way to get BIGD out of this house
Hannah – I’m so conflicted it’s like we need Claire to win HOH next week
They hug
Hannah – we have to get to final 6
Tiff – we can’t play the game we want to play
Hannah – we need to both be able to win that final 4 HOH
Tiff – so neither of us can win 5
Hanna – if we can’t get BIGD out when we’re here (6) how .. when?
Tiff – if they take KY out at 6 and I can’t win 5 I’m on the block 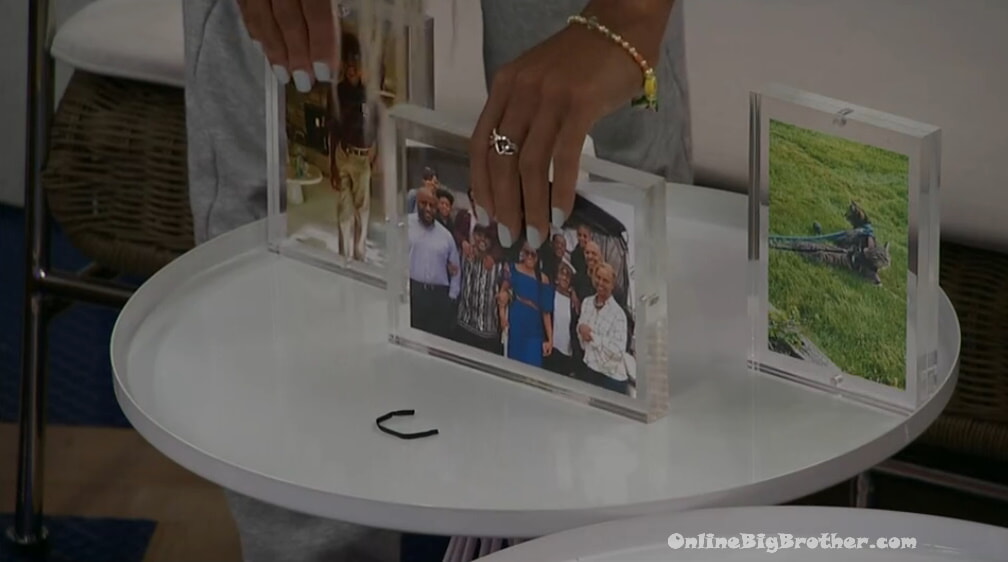 1:14 am Tiffany alone in the HOH talks to the cameras says tomorrow is veto. She’s going to try to win it as long as Alyssa doesn’t they should be Okay
Tiff says she made a few members of the cookout pissed yesterday “the motto of the season no risk no reward so I took a risk I hope I reap the reward”
Tiff – I hope I accomplish what needs to be accomplished this week.. Which is sending Alyssa home
Tiff – I hope I can secure my nominations tomorrow to ensure that Alyssa does go home this week.
Tiff says she doesn’t want to have to nominate Claire. 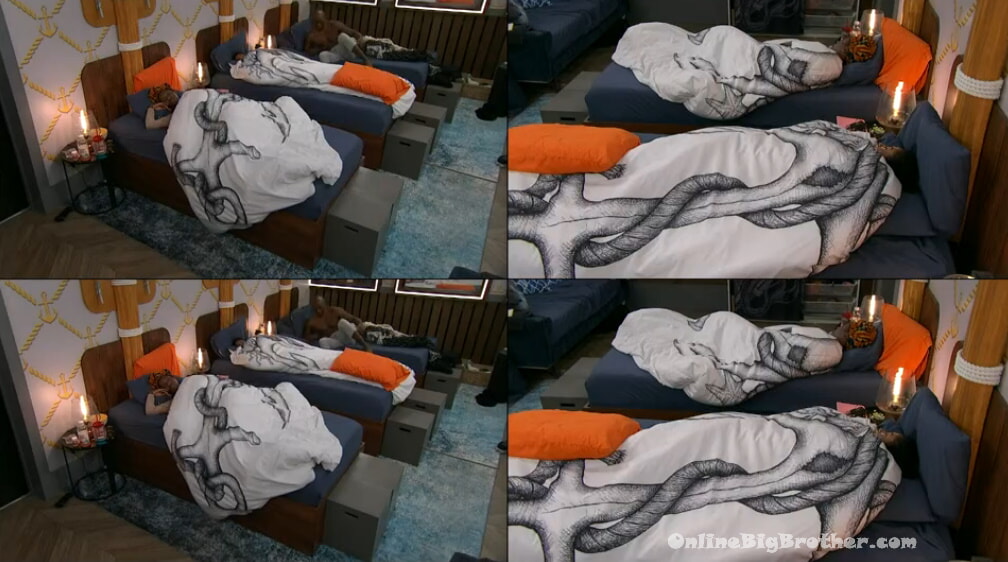 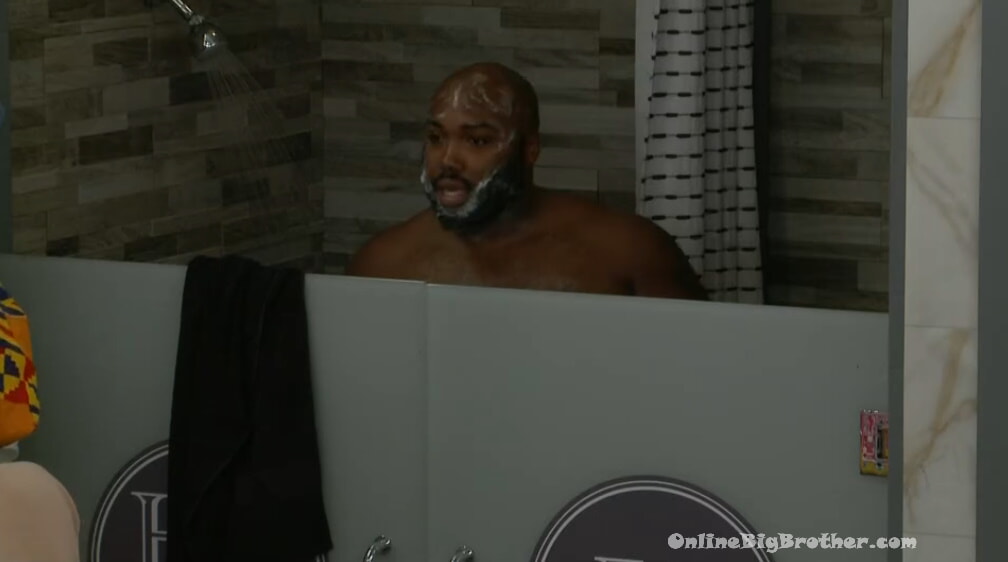 7:21 am DF already up taking a shower

8:30 am Feeds cut to pound puppies for veto player picks.

Please consider a donation to keep the madness going.

If Tiff & the rest of the cookoit were bright for 1 minute. They could take out the no1 competitor left in the game. Vote out Xavier.

can’t do that!
the CO as final 6 would be a milestone on BB and for BLM

That would be really nice and ideal, but I think that in the end, they will probably stick with The Cookout

X take Alyssa off block to get sent home

Tiffany should have let kyland win so everyone looked at him as the selfish one. Idk how she gets to final 2 unless Claire Hannah and her win back to back. I also don’t see why targeting Derek f who will never win anything is so important to them. They can get him out at anytime. Azah and Derek F will never win anything so just get X and Ky out

I think Ky would have put up Tiff and Claire. I think Tiff thought that as well.

Ky can’t be trusted in their eyes. He did not fall when he should have. Azah fell right before him and that should not have happened. And who wants to have a one on one with Ky anyway. Lol!

Why isn’t anyone targeting X or Ky?
A Theory.
Gee, the two people in the house that feel comfortable enough to go bitch and argue with production? They complain to the minions of Grod and nothing happens to them?
A planned 2 hour episode assumed to be a triple becomes a normal length episode double and a two hour episode double the next week, within 48 hours of Ky having a childish tantrum at the thought of a triple?
The guy given the have not room to himself for a week?
The other guy awarded with food while he’s a have not (those damn blt’s rise again), and ‘punished’ with no punishment consequences that look good for episode onlies to believe he actually suffers a risk.
You know who got this treatment in most recent history? 22’s Cauliflower and 21’s Jackhole. That’s who.

Yeah. I wonder why nobody is targeting the entitled acting manbabies. blink blink.

San_Diego_Gal(@sandiegogal)
Reply to  another name

If I recall correctly, NicoleF was also known for filing complaints in the DR. And per the trend you indicated, nobody targeted her.

On the TE being switched to two DEs, perhaps it was Grod’s caving not only to Ky, but also to BB Twitter. There was an uproar on BB Twitter that there would be no time to enjoy the Cookout as F6 because a TE would take the house from 7 to 4. Demands were made for a change in production scheduling to allow the Cookout as F6 to have time for a celebration. So, Grod appeased Ky and appeased the Twitter mob with the change to two DEs.

another name
Reply to  San_Diego_Gal

Yes. Nicf was in that grouping. twice. 18 and 22.
The whole we won’t get a f6 celebration twitter thing? I happily missed that.
I’d probably have tweeted a response that would have them trying to get me booted off twitter. (never EVER EVER respond to a hannah fan tweet with anything but hannah praise. I’m completely serious, you will get death threats).

Hannah – “I’m so conflicted it’s like we need Claire to win HOH next week.” This statement should be followed by Hannah & Tiff realizing this is why X has been so adamant about keeping Alyssa. Besides his crush on Alyssa, X wants to keep her to take-out one of the CO members (namely, Tiff). As Another Name has been saying, X is itching for the CO alliance to break, but he wants the blame on someone else.

Well said. If Alyssa manages to win veto and Tiffany decides to blindly put up Claire in her place instead of another cookout member, she may as well write the cheque out to X and pack her bags.

Hannah-We have to get Final 6
Tiff-We can’t play the game we want to play.

I’d love Alyssa to win POV to shake things up. Unfortunately I think things will be boring and pretend drama with Alyssa going to jury. I don’t know if F6 is production or CO true goal. We’ve seen different people wanting to push things but not really following through.

“We’ve seen different people wanting to push things but not really following through.”

100% agree with this statement. Also, it seems to be that the HGs change direction after a visit to the DR, so production manipulation reigns supreme.

Yup & after visit the stress literally shows all over Claires face. Breakouts of stress zits & she has become more restless with her hands, picking constantly at her face.

Timed Veto…….
Been productions way to control who wins for many seasons.
Like last week …such BS

Personally they sjoukd had gotten out tiff. Claire and Hannah shes trouble.. x and KY need to get there butt in gear or they be girls in the house that won’t be good

Claire & Alyssia are so stupid if they think female CO are “real”
friends. Real friendship ends at the color of your skin with these people. You are getting played so bad by CO.

Simon or Dawg, haven’t gone through your posts yet, but did you get the video of Claire trying to mock KY’s walk and she falls? It is hilarious!!

LOL I didn’t see that when was that?

It must have been yesterday some time because a few of the accounts that I follow on Twitter posted it. I will see if I can find the time

LOL too funny! Thanks for finding those!