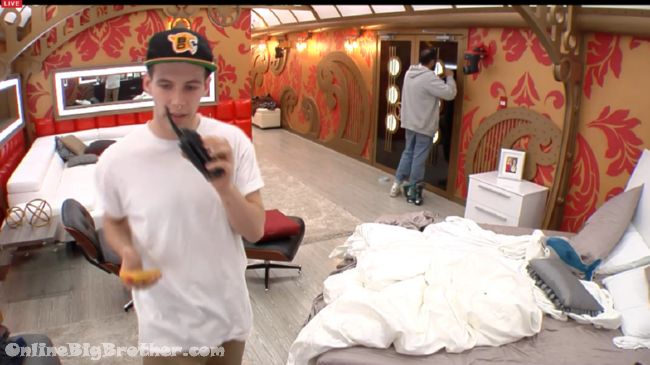 5:52pm HOH Maintenance Guys working on the Door. The Audio is from Cam 1-2.

5:54pm
Everyone is collecting in the living room Sindy plans on an activity something from her cruise ship job. Willow goes into the Have nots to wake Godfrey up
Willow – I want to make out with you GODFREY .. We gotta make out .. Make love to me Godfrey. 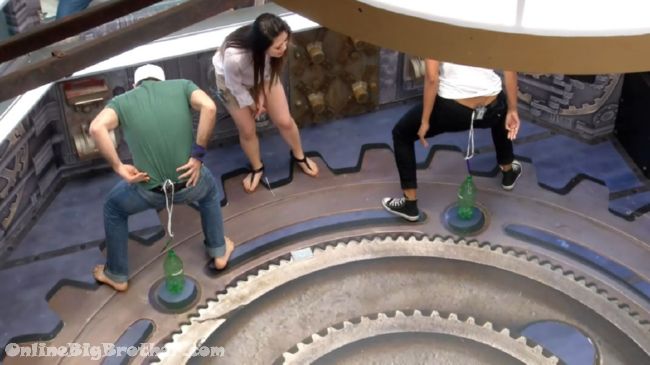 6:06pm They’re playing Sindy’s game everyone having fun. After it’s done they laugh that the live feeders and production are all thanking Sindy right now. 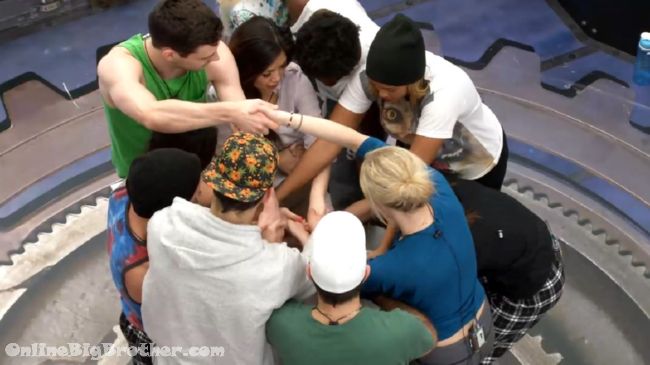 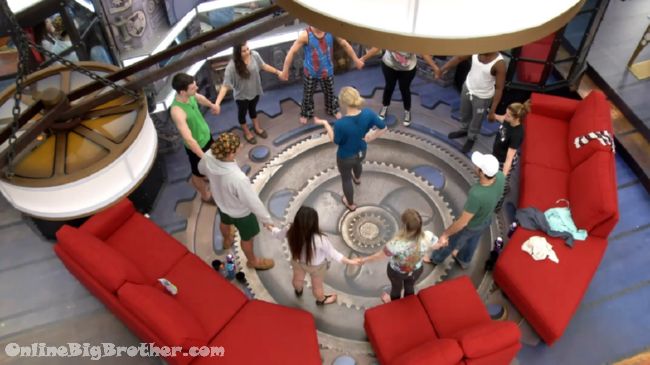 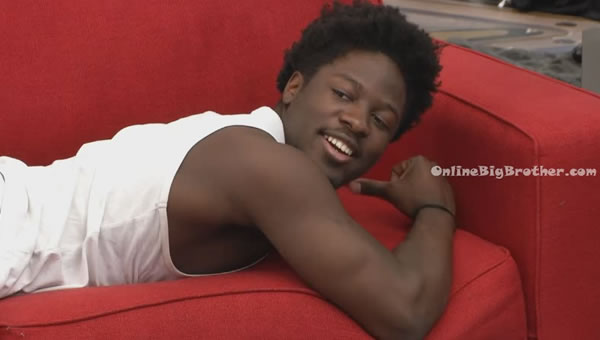 6:41pm Random chit chat
Brittnee joking that she’s had one cuddle mance in the house and that was with Bobby. Tells Bobby she’s sorry but after the game is over there’s nothing between them. Godfrey plays up that he likes Brittnee.
Brittnee calls Godfrey a beautiful Chocolate man says she’ll find him a good girl because she’s not the one.
Godfrey – “You’re still a young women you don’t know what you want yet. I’m willing to wait for you.. I’ll be there.. i’m just going to wait”
Kevin joins them asks Brittnee if what they say is true about black guys (Cr**ches)
Sindy says the biggest d1*k she had was on a white guy
Brittnee says her last guy was well endowed it scared her a bit. Says he looked like a young Denzel Washington
Godfrey – I look like a middle aged Denzel Washington cmmnn you don’t see the resemblance.. from the side.. just from the ears .. we have the same ear..
Brittnee says her typical type is caucasian
Godfrey – I got a bit of Caucasian in my I’m 6th generation Caucasian man.
Godfrey – “6Th generations White man right here.. You just can’t see the white but trust me.. i’m 3.65%”

6:50pm Willow and Sarah
Willow sharing some stories of her youth sounds like she’s been “Jumped” and in fights a lot.

8:18pm Feeds down BTW
They’ve been down for over a hour

So I take the round 2 will happen live on Weds?

The backyard is closed and we can hear construction going on. It’s a bit early to start building a set mayne the feeds go down and they have the comps before wed.

BB please write better scripts for the players, not all females are brainless. You do have 3 out of the girls that don’t have a clue. Of course you picked them. For the guys…..power over women, what else is new. There are 4 of your players that wouldn’t bother me of winning the game. Godfrey, Sarah , Bruno , Sindy…oops she is gone, too good for the show, I’ll go with Britt. Hey tell your cameraman he has his hormones running too much over Ash. First post for me , might be my last.

Yuuup… bring it BB, it’s needed now so Sindy can blow up that Popsicle Stand!

Yo Godfrey is growing on me by leaps and bounds – sharp, funny, articulate, understated. He’s the perfect player for Big Bro and I’d love to sit and have a beer with him after the show.

I must say, God is killing it.

Hooray for the maintenance guy! I have to admit to becoming Team God ever since his speeches about getting Zach. He had nothing to lose and Zach needed a wake up call. Really hoping God is the one to take Zach out.

Sindy is going to be missed in this house full of comatose players.
This season is like an ad for Zzzquil

So hope they do the double and show it tomorrow. !! Diaper needs to go!! Bobby and zack.

willow is starting to grow on me

Sorry to see Sindy go, but she screwed up by blowing up Bruno and Bobbys game and trying to get them put on the block. She is the only girl with the strength mentally and physically to take on the other side, but doesn’t think past the current week. Did she not think it would get back to them?

Godfrey and Britt were so cute in the human knot game. They grabbed each others hands even with their eyes closed. :)

Godfrey is freaking hilarious. He’s so spot on and has remarks so fast. You’re darker than Denzel though lol.

Kevin’s comment question about Black penises was pretty funny. He seemed a little envious. I’m not surprised he’s open to dating all kinds of people. I’m of a similar mind, I like the eccentricities of different cultures/ethnic groups.

Is anything going on worth following tonight? Seems like it may be a good night to take a break from BBCan3.

Yessss the maintenance guy!!!
Wooohooooo : D thanks Simon / Dawg for posting the pic.
Did he bring WD40 for the squeaky door too? lol