3:35pm Backyard – Victor, Jozea and Zakiyah are talking. Jozea says that Tiffany is trying to turn Michelle for Paulie to stay. Victor says we just want to get past this eviction .. get Paulie out and then we’ll move forward ..as long as someone from our 6 or 7 get it. Zakiyah asks where’s Tiffany at? Victor says she’s shaddy as f**K! Zakiyah says every time I come into a room with her she is quiet. Bronte joins them. Jozea says whether its Paulie, Tiffany or Nicole …we got to get them all out. Jozea tells Vic we got James too. Vic says oh yeah once he saw how many people we had he knew he had to vote with us. Bronte says they clearly don’t know how to play the game. You can’t flip flop. Once everyone sees it, they’ll vote you out. I think they cast a lot of intelligent people and you’re not going to get away with lies so you might as well be honest.

Safari room – James, Zak and DaVonne are talking. Zak says that he (Paulie) talks to Tiffany a lot. Zak says she tried to play me today .. she was like so what do you think about Paulie. She’s conniving. James says she’s playing like her sister now. Frank joins them. Zak tells him how Victor and Jozea asked Paulie who’s vote he had and he said he had me. Frank says he shouldn’t have said that. I told him no more game talk. Frank says I trust Bridgette because I know she’s got mine and Paulie’s back. Last night she came up and said they’re having a meeting down stairs and I don’t want to go to it.

Tiffany joins Day and Zak. She says that Jozea is staring at me .. burning a hole right through me. Zak brings up how Jozea was talking about how you were working on Michelle to vote for Paulie. Tiffany says we were talking about he wanting to move to Florida. Tiffany says its so hard for me to just not go off right now. Zak and Day tell her not to worry about it. Paulie joins them.


4:35pm – 4:55pm Cam 1-2 HOH room – Frank & James are talking. Frank did you like how I was F**King with Natalie last night? James says yeah. Frank says we don’t need to flip them but we could. Especially with Jozea sinking his own ship. James says Vic’s whole thing is that he’s a beast and is going to hump it out. Frank says he would not have done well at that comp yesterday. He didn’t even do well in that Roadkill comp. Frank and James take a nap. 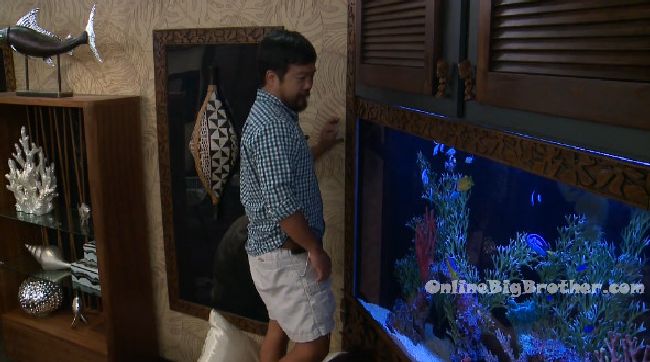 5pm – 5:10pm Cam 3-4 Paulie says I’m getting so sick of seeing the blatantly obvious. I have to bite my tongue so bad which is hard because I feel like I have a good relationship with everyone. Paulie asks if Bridgette is with them. Zak says I don’t know. I can’t get a good read on her. Paulie says Frank trusts her. Zak says I know that’s the only reason why I want to trust her. Paulie says at the end of the day I would feel more comfortable if the anonymous person put up Bridgette. Zak says regardless of who goes up .. there’s more people against him (Jozea). No worries, you have nothing to worry about. Paulie says I don’t trust Natalie or Bronte. I just want Jozea to go and then I want to be the one to send Vic home. Zak says or me. 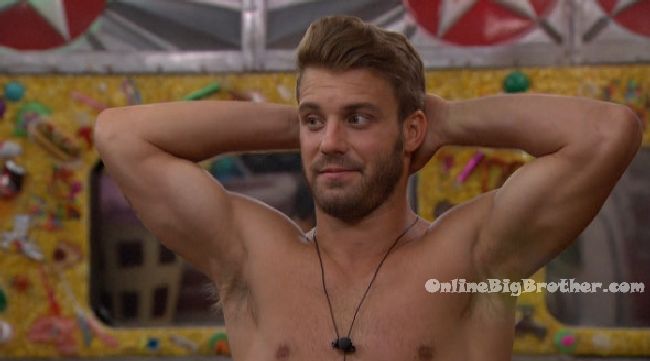 OMG some people are freaking out online about Corey, calling him Aarron 2.0… What did he say I know it wasn’t that unfortunate “The Bachelor Party was gay.” commen, that ws no big deal at all… I am gay and ws not offended at all, it does not make him homophobic. … Did he say something stupid during that conversation with Joz about politics??? I don’t get it, the only person in the house that has been racist is Joz… because he keeps saying that him, Da and Zak understand each other because they were raised (Obviously the weren’t because if he was he’d know not to call himself the messiah.)… oh well. I just did not hear anything that he said that was so offensive.

scratch this comment is was just the lame “… His bachelor party ws so gay comment.”… christ my people ned to chill sometimes… every dumb comment is not homophobic.

You either wanna have Corey’s babies or you’ve had several wet dreams about him since the cast reveal.

I love your comments Eric Ca!

It was about burning the goat for fun when he was in a frat. He thought it was funny.

Um wtf. Corey is a sociopath.

I really don’t get why people are hating on Day for not trusting Tiff. Tiffany is creating a sibling alliance with Paulee just like what she did with Steve and those two ended up in the final three. Also Paulee is not a part of the 8 pack. Granted Tiffany is loyal to fatal 5 as of the moment, but Day is not actually blowing Tiff’s game as of now. Also the only people she told her worries about Tiff is Z, James and Frank (people that are in her core alliance), Vets and fatal5.

No one said Day is “blowing Tiff’s game” but Day has said that Tiff is playing a Audrey game by stirring up stuff when that is actually what Day is doing.

Day can’t blow Tiff’s game. She doesnt even know what Tiff is doing. She fears her because she is Nessa’s sister and they all are like damn she is gonna run this shit unless we stop her.

Days plan to stop her I guess is going around steering people to think negative about Tiff. Good luck with that Day Day:-) I promise you Day is gone weeks before Tiff:-)

Hit those thumbs down Day fans. Hit it!

Tiff for the win!

Wheres Michelles gorgeous self? We need more Michelle. Less Natalie and Bron and Bridge. The eye candy struggle is real:-)

It is the stupidest move to throw your own alliance members under the bus.
Da and Especially Zak keep talking smack about Tiff.
I never liked Da, can’t wait till she is out before jury.
Zak is so clueless as to how to play the game, I don’t care for her either
But then again I only like Tiff, Michelle, and a couple others so far, the rest of em … eeehh
The point is though … when in an alliance you should only talk smack about people not in your alliance … never your own people

Zack is just jealous that Paulie is paying more attention to Tiffany than her. When feeds first started Zak was all over paulie with her hand on his knee, but now that paulie is spending so much time with Tiffany it’s easy for Day to talk crap and get Zak on board. Typical jealous girl.

Scratch that is was the stupid… Gay Bachelorette comment and they are wigging out that he is a Republican… geez…. my people need to chill sometimes.

I read some where their were a few other comments Corey made on Twitter or Instagram about gay people. If I remember right they were not against the LGBT community.

I love how Jozea and Paul keep saying they run the house. Cracks me up every time. I can not wait to see their faces Thursday night when Jozea gets the boot!

This is such a great site to catch up on everything I missed today. The good news is that Jozea is still annoying must people and will hopefully go home … can not happen soon enough!

Jozea is like Devin 2.0 on steroids, the brightest flames burn out the fastest on this show. Between him and Paul it is like “the battle of the screen time”. We need them OUT so we can actually appreciate the real strategy of the game.

I think Devin was Devin on steroids.

Trying to catch up, since I’ve not had access to TV or WIFI – so basically Josea and the bearded wonder have anointed themselves as the leaders in the house and are running the game? Hope they get put in their place (or out the front door) because it would be painful to have another season like last year where Vanessa was the puppet master.

I kind of hope Jozea still thinks he’s safe on eviction night, just because it’s funny to see him make a fool of himself and it will be even funnier to see his reaction when Julie tells him to gtfo

i think Day is just saying things so people won’t think she’s close with tiffany. staying low on the radar if someone seems to be saying stuff about her, or at least positioning herself to be able to hear those things. unless i see someone talking to the camera, i don’t take anything they say at face value until i see them actually follow thru with it, or i have already seen the person they are talking about saying something.

oh, and, Michelle is on Paulie’s team, why on earth would michelle want to vote someone on her team out of the house? the idea that someone would be trying to sway her around to keeping paulie, well she should already be fully swung to that idea. same if bridgette goes up, neither frank or michelle should even consider voting either of them. The fact that Joz and Paul or whoever else believe that they will? well that is some clever spinnery right there.

they are so concerned with their alliances, and newbie alliances, and getting out whoever, they can’t see that it is not a benefit to a 4 person team to lose a team member, it is an obvious benefit for them to take out someone from another team.

Da has been trying to steer Zak and others in her alliances to think negative of Tiffany. She doesn’t need to fool them of anything. She is simply working against Tiffany. Tiffany is barely playing yet. Why is everyone all leery of her and thinking she is “playing too hard”? Because Da is in their ear all the time about Tiff. Da knows Tiff is going to be a strong player so she is undercutting her now. All of this will backfire. Da’s game is always based on talking behinds peoples backs and steering people to think negative about people she fears.

Exactly! And z is getting a bit jealous of Tiffany and Paulie. Z has a thing for Paulie but he’s flirting with Tiffany too.

So you have da saying all that crap, and z chiming in because of Paulie. It’s kinda annoying. They both need to chill.

Is Josey still pretending to be Miss Sya?

Are you attempting to be cute or is your spelling actually that awful?