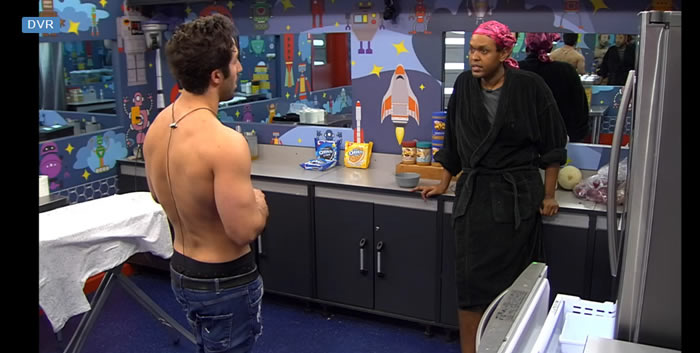 10:00am Gary and Demetres
Demetres – I’ll have to vote you out.. .. Its a numbers thing..
Gary – why
Demtres – you’re the hardest person to vote out
Gary – Demetres you don’t have to do this
Demetres – I’ll tell you if anything changes
Gary – you told me 100% on the couch you told me that..

They talk about the Cassandra vote. Bruno says that Cassandra thought she was safe.
Demetres says it’s because she thought Ika and Demetres were voting for her.
Demetres says he told Gary this morning.
Demetres say they can’t control Gary.
Bruno – you guys have it good with Dre.. she trusts you guys
Demetres says she trusts Ika.. Demetres doesn’t talk game with Dre
Bruno says Jackie winning HOH isn’t that bad. It’s bad if Dillon wins, “Obviously one of us has to win”
Bruno keep saying as long as only 1 of them go up they control the votes.
Demetres brings up the HOH competition and how Kevin just kinda dropped. Even if he knew he didn’t have a chance to win he would have still hung on as long as he could. Says there’s a pride thing.
Adds that he noticed all the guys had dropped off
Demetres – I can’t tell how bad the chicks are hurting
Before he knew it he was one of the last one standing.

Kevin joins them they start to study.

Kevin and Demetres HOH
Kevin says after today they have the majority every week as long as they win HOH.
Kevin says Ika is such a good alliance member “She’s a beast and she lets you know where it’s at”
Demetres points out that Ika is stressed she has 3 people going after her playing for the HOH. (Jackie, Emily, Dillon)

Demetres – I told Gary
Kevin – what was his reaction
Demetres – he’s pissed.. I had told him I would keep him before the comp
Demetres adds that Gary stormed out called him a “F***G liar”

10:38am Sindy and Kevin Storage room
Kevin – Ika is not happy with me
Sindy – she’s calmed down now..

Feeds are down.. Probably won’t be back up until after the show.

I’m really having hard time to like anyone this year. I was supporting Cass and Gary for entertainment reasons.. But dear God, now it’s a zzzzzz fast. Plus it’s full of catty people who are just b#tch3$. Neda is just unbearable, her nastiness during the slop cookies reveal was just too much to take. I would have snapped. Bruno showed once again his bad temper. Sindy is just a huge let down. Ohh boy….

Guy From Canada
Reply to  BBcanned

Bruno was angry because all this week production was screwing him and Kevin over and over. Don’t hate on the guy for having a great social game and blowing up out of frustration. He’s here to play a game, and is competitive. But when rules are laid out, you follow them, and they change the results to suit their needs, that is bs. I’m surprised that’s th wonky out burst we saw.

BKCM
Reply to  Guy From Canada

what was the outburst? I missed it?

He found out he was on slop and he started kicking his bag repeatedly. He was alone in the room so noone else saw but they showed it on the show.

Father of 3
Reply to  BKCM

Honestly as a father I wouldn’t want my children to see that attitude. Sad and very agressive for no reason. Well he hated to be on slop. Also the game wasn’t going his way. But it’s a scary, agressive reaction that doesn’t value 100k.

Anonymous
Reply to  Guy From Canada

No….the real question is, why the heck didn’t you just play smart? Bruno is such a dumbass. I would actually be walking around eggshells in that house making sure something like this didn’t bite me in the ass. They were notified it was “backwards week”, everyone in the house is so stupid. Neda is also a complete tool.

Glad I’m not the only one who thought that Neda was acting absolutely ridiculous and embarrassing during the slop cookies reveal. She used to be one of my favourite BBCAN houseguests before this season.. Now she is one of my least favourites. Sad.

she was before her true colors came out. I voted for her but cant stand the b1tch anymore. Hope she goes as soon as her immunity wears off!

I liked her too. Voted for her. Now I feel bad about it. She got the power in her head and act as a bully teenager

Canada was on the whacky tobacky when they voted for her safety. But now we’re back from rehab, baby. And we’ve seen the light. ?

I am so disgusted in how BB5 is allowing so much bullying from Neda & Ika. they are both such vile human beings. I get that it’s a game but to be that to see how they are treating Jackie and Gary is not right at all. BB5 should of stepped in once they saw how damaging Ika is being to Jackie. Shame on you BB5.

Oh please!
Jackie was all talk during her interview… and now she wants to play the victim card!
Jackie is used to being the proverbial big fish in a small pond – until she left the pond and saw the ocean is way bigger than she thought.
Neda already sad she wasn’t going to at nice this season… and Ika makes no apologies for being bitchy.
No the shame is on you.
Watch another show if you have a problem with this season

Ugh there was no actual vote! It was rigged...

They didn’t even have an actual vote..everyone I know that tried to vote couldn’t. They gave it to Neda. Everyone knows what a little snot she is..entitled brat is actually more like it! she thinks she’s the queen of Big Brother and well..Jon beat her butt so she’s actually not. Naming her alliance after her clothing line..bad idea Neda! People despise her and now know what NOT to buy. I wouldn’t spend one cent on her clothing..not adding to the help Neda get rich fund. That’s all this girl is about..money!

Anonymous
Reply to  Ugh there was no actual vote! It was rigged...

i didnt even know there was a voting going on, fwiw, and i had been looking since bbcan is known for it’s voting for this and that and the other thing. couldn’t find any sign of it, so i was pretty surprised to see that there had not only been one but what it was for. i would have voted for neda tho, because we would have voted based on prior history. the fact she is not really the same person this season as shown last season would have just been a nail in our coffins for protecting her.

i never would have voted to protect cass or gary, i never agreed that gary should even be allowe d back in, i have a problem with former winners getting back another chance to play. i do not mind final 4 or 3 people getting back in as much as that

I was on BBCAN website and was able to vote so I don’t why you weren’t. I did vote for Neda but this season she is completely different. I wouldn’t have voted for her otherwise.

I know I tried more times than I can count and it would not take any of mine either As well as a few other people I have spoken too in the live feeds! So I do have to at least consider something was a little wonky with the whole vote thing!

same here!!!
I voted a lot! For Neda!
I regret it now! Shes totally different and very arrogant… Cant stand her and I want her gone!

Anonymous
Reply to  Ugh there was no actual vote! It was rigged...

sorry, but the vote was real. I voted multiple times. I voted newbie, not vet with full knowledge a vet would win, but i voted.

Guy From Canada
Reply to  Ugh there was no actual vote! It was rigged...

I voted a butt load for Kevin (pun intended). I figured he was a sure shot to jury anyways, and would play the same regardless. I would have loved to see if meanda could have lasted this long without protection, but the protection added to her ego and she has blown up her long game, sigh.

Anonymous
Reply to  Guy From Canada

Agree – hands down she has robbed the winner in her season, inflated her image since then and now what was a glimpse before has been fully revealed now .

Huge shout out to Dawg, you presently have more votes for fav player than Jackie, good job! lol And on a side note, all those who know Dem take a lesson from this page and never trust him when he tell you hundo! Especially when the show went out of its way to show that clip on national TV! You are not looking such the nice guy anymore! KHARMA

Demetres is the BIGGEST follower I have EVER seen on Big Brother (and look: I have watched so many editions and from different countries). Why is he handling everything to The Six? Doesn’t he see he’s at the bottom of the totem? He’s gonna be the first to get cut off at the first chance they get to take him out. Meanwhile, Neda annoys the F*** out of me and she makes me feel bad because I’ve started to attack her appearance in my mind. I hate being that way but I cannot look at her and not despise her mean girl ugly horsy mug. And Bruno… boy… what’s wrong with you? You signed up for a second round on BBCan… what were you expecting? If you can’t handle playing games, don’t come into the playground!

The only reason I am voting for Demetres is I hope they show him naked. Other than that they should have kept Mark Chrysler.

Demetres is a hot hunk of man.

For all you Kraken show watchers. Our new green screen came in today. can finally do away with the drop cloth.

Ika is an ugly person in the inside

She is just playing both side. But also very emotional in a bad way. Everything is about her. But it’s not. Dad