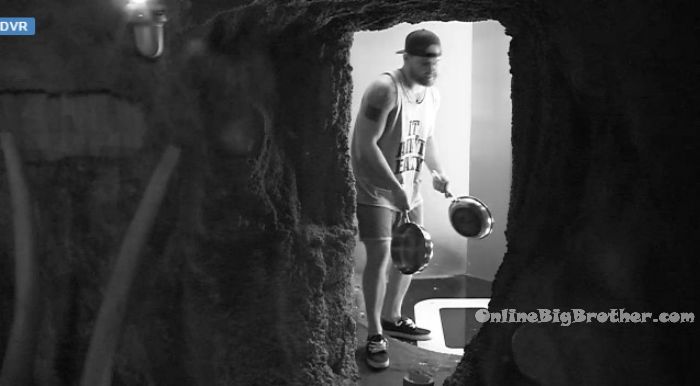 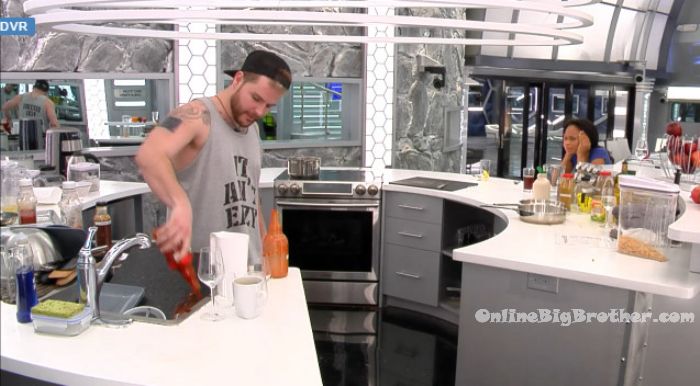 2:30am Dallas and Ika in the kitchen. Dallas – I’m going to put some condiments on the shampoo bottles… so don’t have a shower tomorrow. Ika and Dallas laugh. Dallas – I’m thinking about putting Cindy on blast too. She’s about as real as a 3 dollar bill. I’m going to grab some steak sauce. Ika – get rid of all the ketchup.. they love ketchup. Dallas – f**k em! F**k em all! I’ll wait till you go lay down for a bit and then I’ll do the pots and pans.. so that you can be like what the heck is going on. Ika – I think if you hadn’t done that thing with the French Connection .. you would have been fine. Dallas dumps a bunch of condiments out in the sink and then throws out the bottles. Ika – this is so cool. I’m actually watching this live. Get rid of the salt. Dallas – I already did. Ika – get rid of the garlic, they love it. Dallas dumps the garlic and a bunch of other things out in the garbage. Ika – we’re going to hell for this. Onions, they love onions. Get rid of all the black pepper. I’ve been hungry all week, I’m loving this. Dallas empties the rest of the spices into the garbage. Ika – this is some petty sh*t. Dallas – f**k em! Ika tries to go into the storage room. Dallas – they (production) locked it on me because I was in there dumping things out. Ika – they are going to DIE! 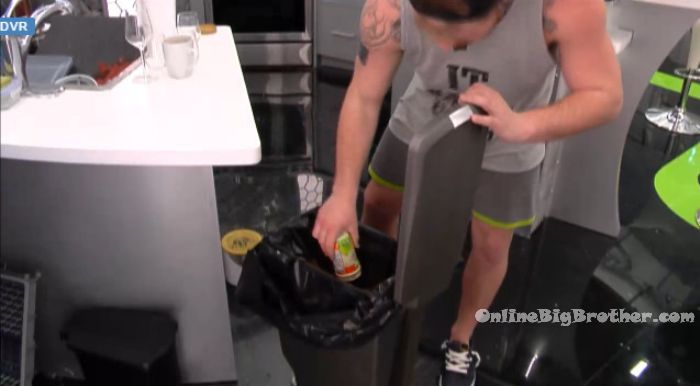 Dallas and Ika head into the bathroom. Dallas empties a bunch of the shampoo bottles out and then fills them with condiments. Ikay heads to bed. Dallas continues to empty out shampoo bottles and fill them. He then heads down to the kitchen and says I’m going to hell for this. He heads out to the hot tub room to smoke. 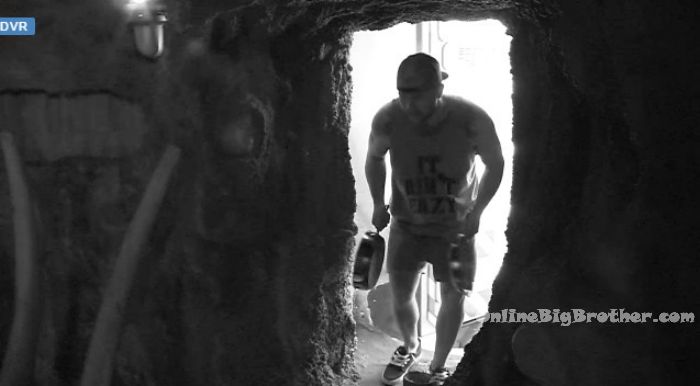 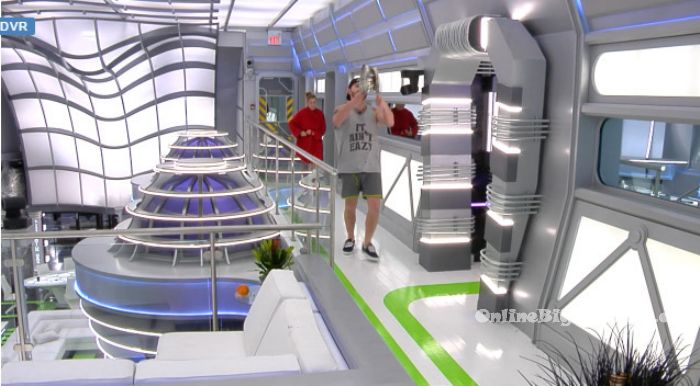 Ika and Dre late night
IKa says they are getting rid of Dallas to get rid of EMily next week. Ika says Dallas bumped the shampoo, hot sauce etc..
Dre – I want to save Dallas.
Ika says Kevin, Bruno are in an alliance with Dillon and Emily.
Ika – if we keep him he’s going after Dillon.. Why are we sending home the guy banging pots and pans
Dre – I always wanted to keep him
Dre – we’re getting rid of Dallas because everyone is scared of Cassandra
Ika – right now Cassandra isn’t coming after us

Dre says they just don’t have the numbers to keep Dallas.
Ika – not even if twe tell them about the alliance the wise guys.. Or do we keep that to ourselves..
Dre suspects that Neda is working with Emily and Dillon.

Ika – Cassandra is a snake but are we willing to keep that snake..
Dre – could she pull this off (keeping Dallas)

Dre says if there’s a way they can keep Dallas she’ll execute it.
Ika says the only votes they have are her, Dre, Cassandra, Gary, Jackie, William.
Ika – the house is split it’s 6 – 6
Ika – I wish this was yesterday.. will this be a trend flipping votes on Thursday.. we still have time

Ika points out that Kevin and Bruno were in an alliance with Dallas and they are willing to cut him out week 2 ‘That’s ruthless”
Ika is going to talk to Demetres see if she can convince him to keep Dallas, “I think he does trust me”
Ika says Neda had a big influence in getting Dallas on the block.
Dre says that is the one disadvantage that the newbies have in the game because the vets can influence them.
Ika agrees, says Neda has a lot of pull.

Dre says if she wins HOH she’ll put EMily and Dillon up and if POV is played Sindy goes up.
Dre – I’m not giving hugs to anybody i’m done I’m giving kisses.

Ika – Dre says she’s on board, JAckie’s on board, I’m on board, William’s on board, You’re on board.. I’m not sure about Gary..
Ika – how do we send a legend like that home
Cassandra scoffs that Emily thinks she’s safe
Ika says Cassandra needs to get KAren.
Cassandra can’t get Karen they need to convince Gary to get Karen

(Ika and Cassandra Have nots)

Demetres asks Ika is he’s in the position to break the tie should he keep Dalals.
Ika says they need to convince the house that is what the majority wants. Adds that right now there’s only 2 people that want Emikly to stay and it’s Dillon and Emily.
Cassandra joins them says she want’s able to talk to Gary but he’ll vote to keep Dallas.
Ika – all the newbies want him to stay
Demetres – I totally agree we should keep Dallas
Cassandra – we should keep Dallas
Cassandra – that is the best TV I’ve seen in all 5 seasons..
Ika says they can’t speak to Karen because if they do she’ll tell the whole house that you tried to flip the house.
Ika called to the Diary room
CAssandr a- what should I do
Demetres – Gary said he’s on board?
Cassandra – we have 6 votes we need at least 7 because we don’t want you to break the tie
Demetres – If I have to I will
Cassandra – Emily is being so cocky.. she’s so rude..

okay. watched that whole ball of whatever you want to call it.
from the backyard being left open (doesn’t happen) to the go to bed messages beyond the norm as signal.
to the cuts in feed as set up for each of these things (his so called off the cuff speeches).
to the cuts in between the pots and ika and cass talking.
sorry. that was as close to scripted as a situation can get.
yup. i’m calling it. my blatant manipulation sense just went overboard.
that’ll be the end of the season for me.

note to self. don’t leave comments during insomnia outbreaks.

Yawn. Get some original material Dallas. We’ve already seen this behavior on BBUS

The pots and pans were weak. I thought he went in there and made sure everyone is up. He went there for three seconds singing a tune.

did you yawn when ED did it? saying we’ve seen Tanisha do this on BGC1?
“Yall neva gonna get sleep bcuz of ME”!!!!!!

i thought it was dumb when ED did it the first time, but now it is a BB tradition, so it appeals to some of the fans. and some of the ones in the house. so maybe all this was a good thing for dallas.

I hope Dallas stays but I am hoping more for a tie and Demtres has to break it. Yes Dallas is a bad player, but he is more entertaining then a lot of the rest of the bunch right now. Ika may be playing too hard right now and could be out pre jury as a result…..again….

WTF is Ika( BB18 Davonne) doing she is destroying her game. I really was hoping that Ika would do really well and make it it to at least jury but it doesn’t look like it.

Ika is playing hard yea… But this is the best move for her. She’s doing this so she won’t go home pre-jury. She is trying to keep as many big targets in there as possible. She wants to keep Cass and Dallas on the hit list before her. Emily and Dillon are on the hit list before her. If she gets rid of Emily that’s the one person who was coming after her. Newbies want Bruno and Kevin gone before Ika too, That will get her to jury. Once they’re in Jury everyone is waiting to pluck Neda off. Sindy is not making friends or moves. Ika has Demetres for sure!! She has Dre and William and Jackie comes with those 2! Cass and Dallas will stick to her as well. That feeling that you’re getting, that she is playing too hard… it means she’s playing the best game! Laying around and doing nothing like Gary and Neda does not mean you’re playing a great game, it means you’re playing a safe game. How are you going to set yourself up for the finish line if you haven’t made any moves. Everyone is so ready to give Neda the credit for Dallas on the block, but really Ika has all of the power to flip the votes (and the show is going to make it seem like it was all Cassandra’s doing). Demetres has been on standby waiting to see what IKA wants to do, I love that Ika is playing the game much harder than her last season but yes i’m also nervous it will blow up on her too.

love how dallas blow up every1 game know!

I think Dallas trying to blow everyones game up was lame, and shows what kind of a small person he is. It was completely uncalled for and puts a target on others who obviously were playing better. He gives a speech to the vets that they all should stick together, meanwhile he threw Bruno under the bus earlier that day. The man has no class. Anyone can bang a few pots and pans. I like to be entertained just like everyone else, but watching him grab his crotch, puke in the bathroom sink, spit on the hottub deck for others to step in shows how much class that man really has.

I’m glad Dallas is gone, what a slob. He could have used his brain and tried to stay but nope just be lazy and boo hoo about it. What a waste of a player, he’s only good in his own mind. I don’t buy this “make for good t.v. drama” by him staying, he’s too pathetic to be entertaining. He thinks being a man means acting like a sloppy pigI Get a little bit of class and respect. I couldn’t stand him last time or this time. Good riddance!

I guess its one of those things that you had to be there. I thought he was the only one laughing at something that was not that funny or original.