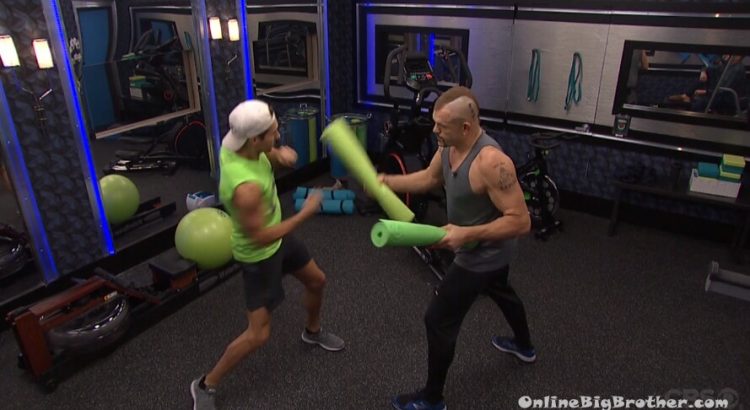 At 6:00pm we got another Celebrity Big Brother Feed Leak. We can start to piece together some things from the conversations but it’s still tough.
Sounds like Shannon won the Power of Veto today. It was a spelling competition. Ariadna, Brandi, Keisha, Shannon played.
Sounds like Keisha won the Head of Household and nominated Chuck/ james. They are talking about using the veto on Chuck and nominating Mark.

The first-ever celebrity edition of Big Brother is here! Stream the premiere Wednesday Feb. 7th @ 8/7c with a FREE trial of CBS All Access. 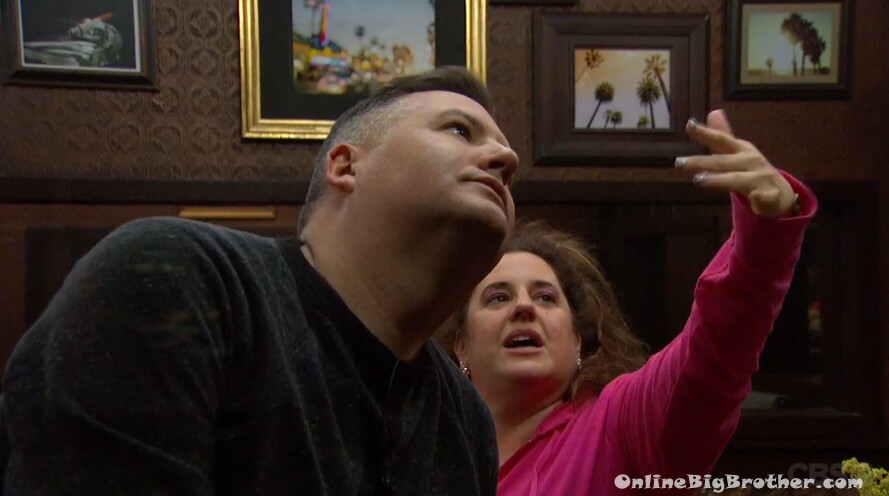 6:00pm Marissa and Ross CAm 1-2
Checking out the pictures in the room. Marissa says “I guarantee” they will have a competition that involves the picture. They head into the kitchen where Chuck, every morning, Shannon are talking about James taking Benadryl and sleeping. 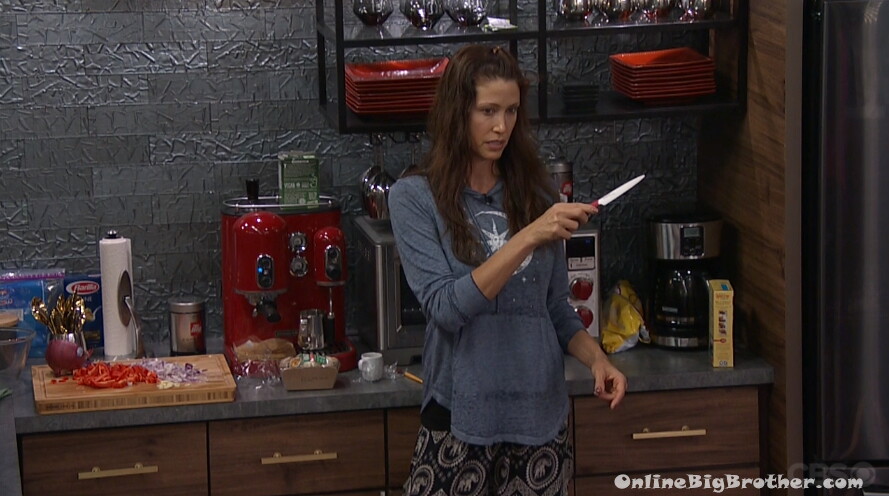 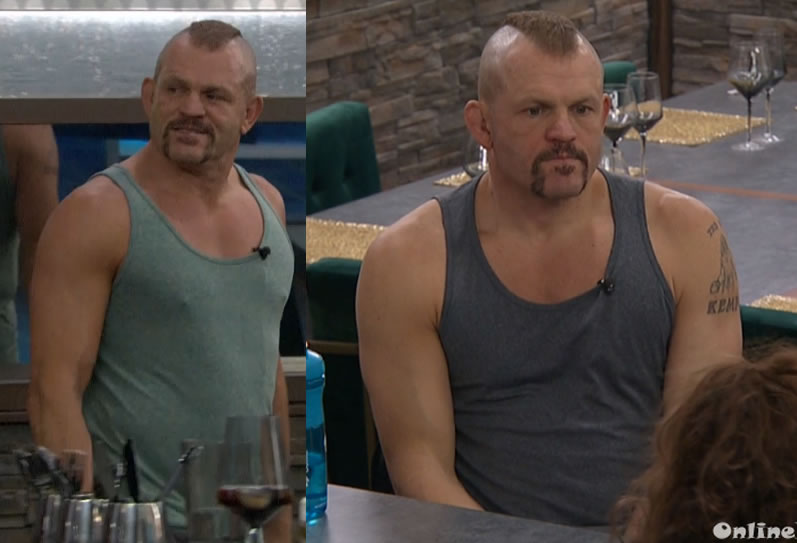 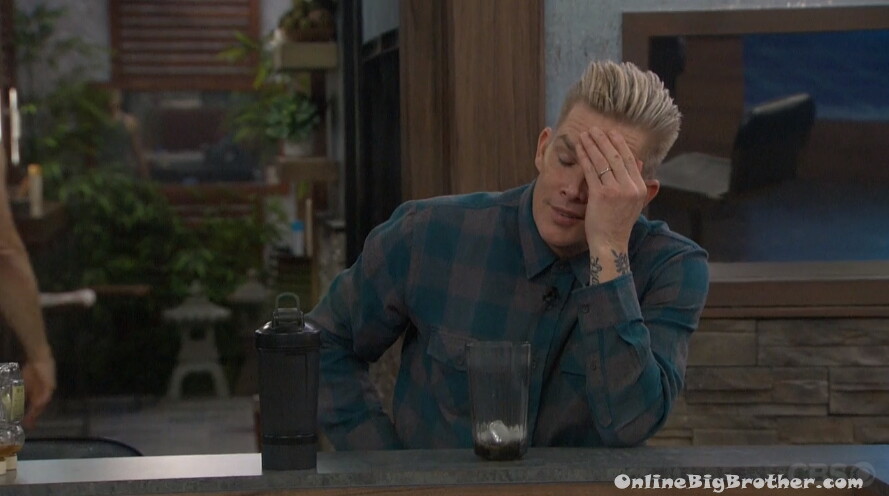 Every morning talks about trying to get Crew members to tell him who won the Super Bowl.

They couldn’t find out.

Marissa talks. Says she has to go wake James up. 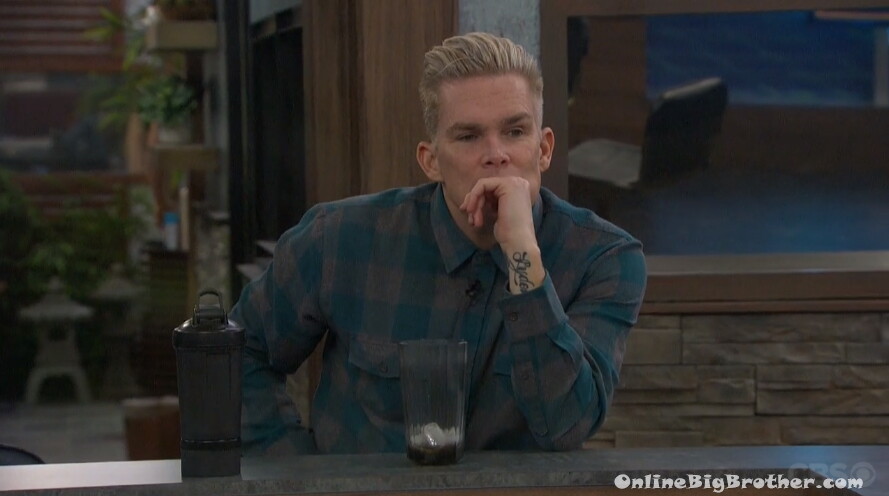 Every morning tries to figure out the date…

James comes in.
Every Morning asks  – you gonna hit the mits homie
James – yeah I love it dude
Every Morning – what you do..
James – rolled up yoga pads 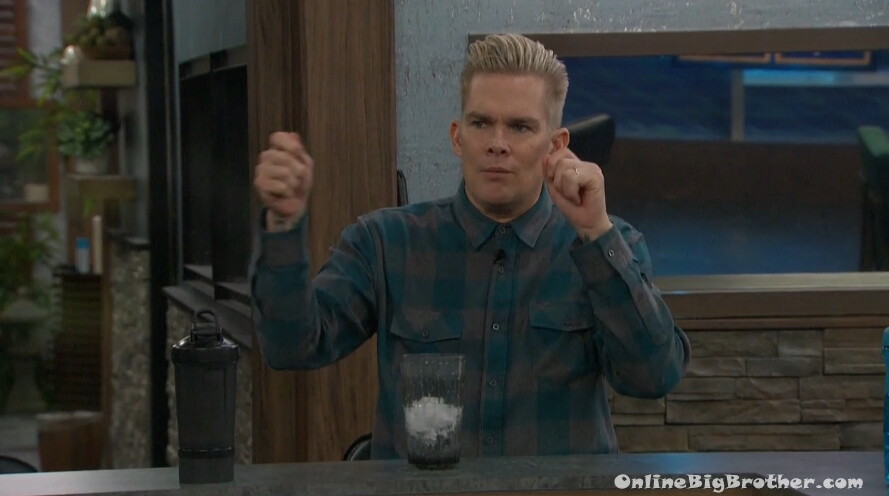 Every morning – you just hold them up..
James – bop bop .. movements..
James – I love it it’s my favorite thing in all training. I’ve done martial arts since I was little
Every morning.. – yup
James – it’s boxing..
Every morning – it’s the most visceral of it all 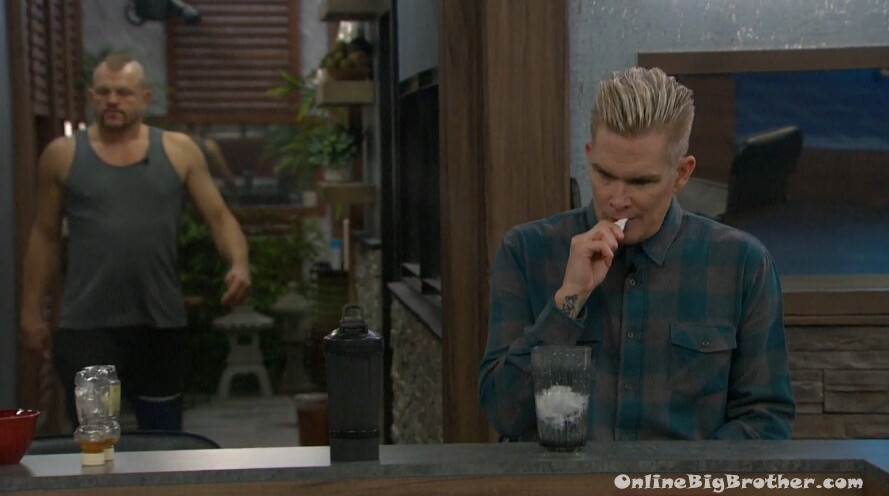 Every morning back to the lip gloss. (Last nights lip gloss featured pics) 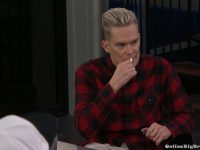 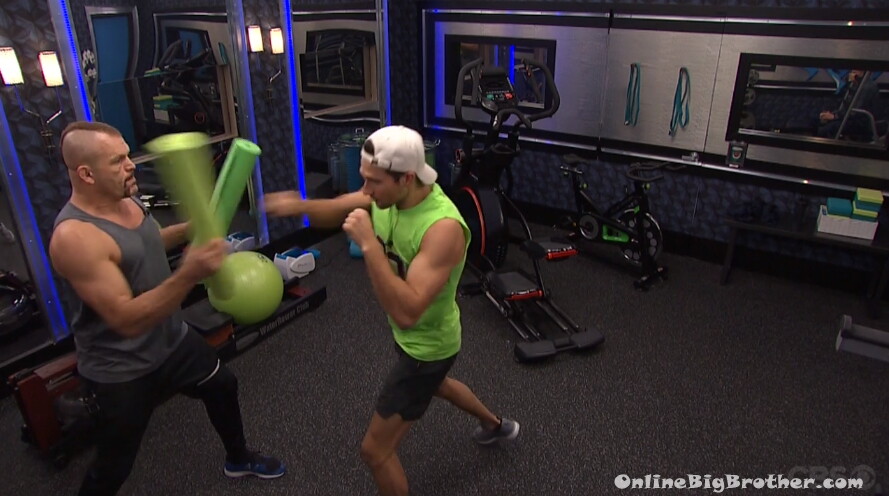 Bros head up to the gym.. (The secret room upstairs is now the gym. here’s a shot from BB18 and the accompany post talking about Paul finding the magic letter.. etc…etc.. … ) 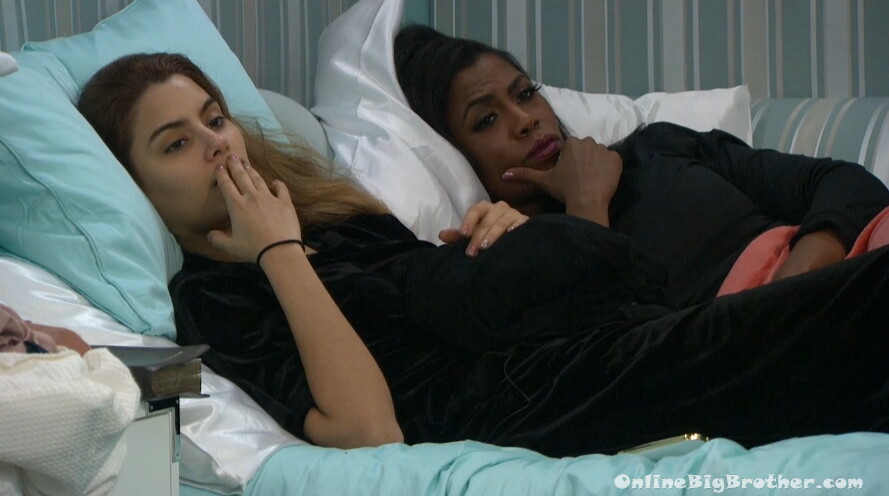 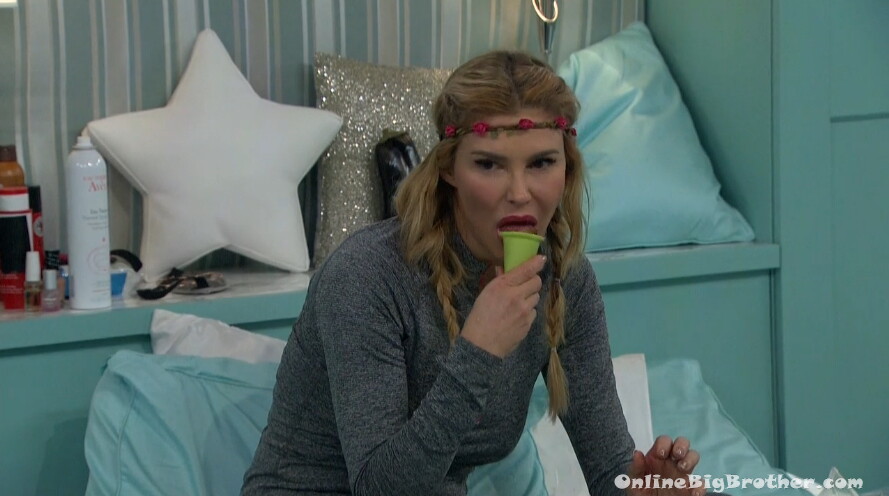 Brandi comes in.
They bring up what Mark did to Ariadna.
Something about during the competition today he disputed something.
Brandi – their ego’s are bent
Ariadna – they are so jealous we are together
Brandi – it’s that bro mentality it’s unfortunate, It’s in their genes..
Ariadna – C’mon, screaming like crazy.. oh you have to check everything again, because they were cheating. Shannon, Keisha and Brandi was helping them (about mark)
BRandi says she wasn’t cheating
Ariadna – Shannon and Keisha wasn’t cheating
Brandi – I know.. THey’re poor sports.. They’re underdogs.
Brandi – they are getting beat by girls.. the’re being big Babies
They says James is being more calm and humble. trying to be nicer and chill.

Ariadna – we knew it was going to be a spelling competition.. (POV)
Brandi – the good news is we still have the power..
Ariadna – thank god for Shannon, that was awesome 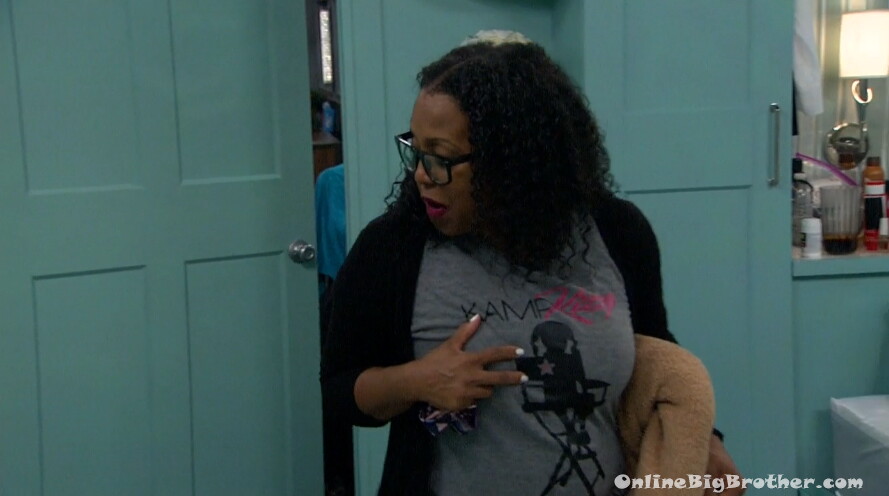 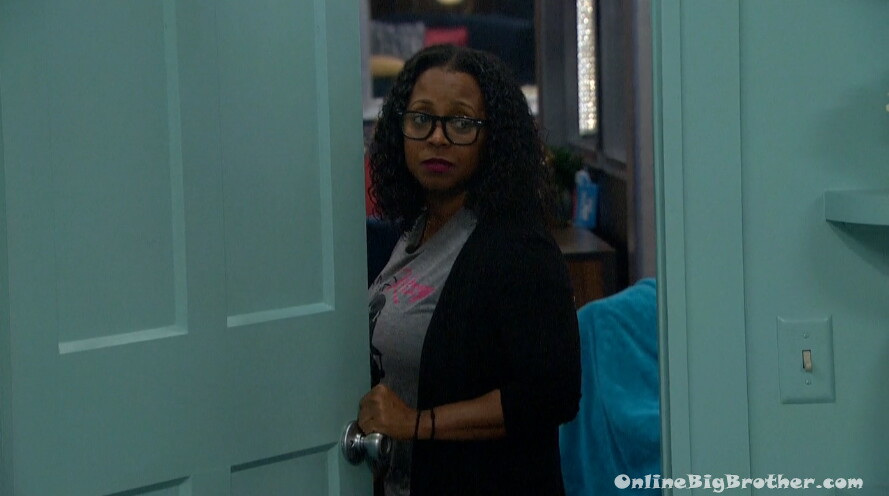 Ruby leaves… “I just want someone to keep my company”
Omarosa goes out to keep her company. (in the hoh probably) .

Brandi and Adriana continue to talk about the boys being pissy..

Ross says Ariadna did great in the spelling competition “English is not your first language.”

Should have followed the casting from Better Late Than Never maybe old but they are ACTUAL celebrities funny as hell to watch and they don’t seem to have a problem sharing beds. In Morocco two double beds five guys. Other cities as well no star power or demands just go with the flow. Love this show don’t thing BB celeb is gonna come close.

Better Later than Never is awesome! But so far what I have read from the Feed Leaks it looks promising this first Season of BBC.

astill wonder how much per hgs are they geting paid to play in thr house because uk versionandrew was paid 10k just to enter the house ended up 12.5k because celebs wonr be playn for free

wow – stupid move Mark -if you are not sure that someone cheated..shut it