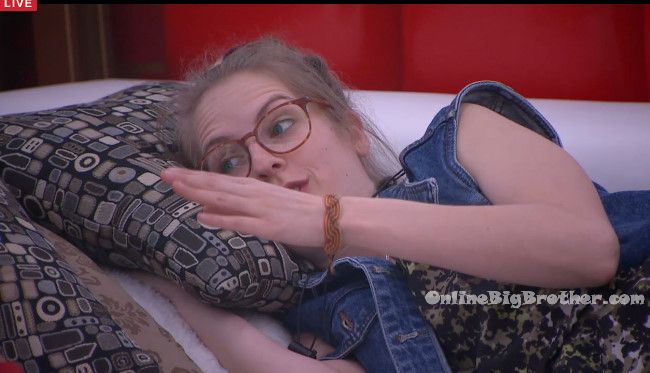 4:10pm HOH room. Brittnee talks to Sarah about being stress out. Sarah says I think we’re pretty equal. I don’t want to knock you down at all but we’ve both won the same amount of competitions. Brittnee comments on the secret power. Sarah says but we were both nominated for that. Pili is sleeping in the HOH bed. Godfrey is sleeping beside the bed. Sarah and Brittnee start whispering even quieter. Brittnee tells Sarah about her conversation with Zach. Sarah tells Britt I am obviously not going after you. We’re so tight, they’re going to put us up together. There is only so much that is in our control. Britt says he said there’s an emotional move and game move .. kind of like what happened with Jon and Neda. But whatever If I go home because of it at least it says more about me and who I am as a person. Sarah says don’t let him get into your head like that. Pili joins in on the conversation. Sarah says there are only two things we need to worry about who vote for us in jury and who will beat us next week.

Pili tells them that Ash told me she isn’t going to vote me out. Tomorrow I will know where her true loyalties lie. What her true colours are. Its not that I want to campaign against him. I have nothing bad to say about him. Sarah says that’s not what the game is about its why you should stay over him. Pili says I just don’t have the words I guess. Sarah says from the sounds of it he’s not even campaigning to Godfrey any more so he probably doesn’t have his vote.. and you B probably won’t vote for him to stay either ..so we’re good. We don’t need to have to worry about it any more. Don’t let him stress you out. Right now we have him up there and we have a shot to get him out. Brittnee tells Pili my logic and emotion meet up as the same thing and that is why I am voting to keep you. Sarah asks would it upset you .. if B and Godfrey voted him out and she (Ash) gave him a sympathy vote? Pili says its a game, I can’t take it to heart but …you know what I mean. Why him over me!? Pili says if anything changes will you guys talk to me? Sarah says if anything changes you will know because I will be running around the house screaming my head off. They continue talking. Then Pili gets up to go and says I’m going to go do something with my life.

4:30pm Kitchen – Zach putting Ash in a choke hold while they cook dinner. 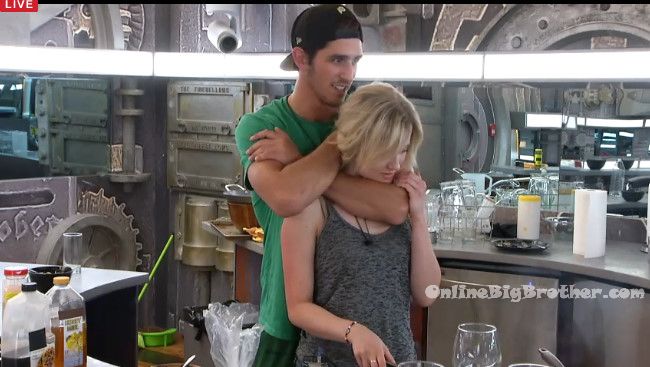 5pm – 5:50pm HOH room – Sarah and Brittnee continue to talk. Sarah’s still trying to get Sarah to realize its the best decision for both of them to vote out Zach. Zach joins them.


6:25pm – 7:10pm All the house guests are in the HOH room talking about random things and telling life stories. Its a quiet, lazy day in the BB house.

this why they should have put 3 people on the block!

Wasnt really that successful with BB15…

why is everyone so mean to pili
like obviously she was oblivious to the fact that she was being racist
and she realized that she was being racist afterwards without needed being told
so if that isn’t enough realization and regret, i don’t know what is
and it’s also not pili’s fault for nick nemer making that racist comment either
and no one can say that they have never made a racist joke before

she didn’t say anything racist, it was insensitive. she imitated a chinese actor/character’s accent in a movie and it was just complete gibberish.

got anything else to say!

and what makes sarah, brittnee, and godfrey better to KNOW that she’s being racist AND not telling her that she shouldn’t be saying that
like if you know it’s bad, and let it go on, isn’t that worse than not knowing?

go back when sarah was talkn about gina maria@!

That’s why Sarah was upset with herself last night. She knew it was wrong not to say anything right away and was disappointed in herself for laughing uncomfortably with her. Her and Godfrey had a whole conversation about it late last night in the HOH room.

It wasn’t so much racism as it was insensitivity. I mean, I’m in high school and I hear jokes like that all the time. I highly doubt it conceals a true disdain towards other races. But it is insensitive and I am against them.

Thank you so much for this forum dawg and samon ????
Super confused, what did Pili say that was considered racist? She is a sweet girl and most likely didn’t realize what she was saying! But what did she say?

Thank you so much for this forum dawg and samon ????
Super confused, what did Pili say that was considered racist? She is a sweet girl and most likely didn’t realize what she was saying! But what did she say?

It was in this post http://www.onlinebigbrother.com/no-matter-what-she-sells-to-you-if-you-win-hoh-evict-her-zach/ The time stamp 11:09pm Pili, Godfrey, Sarah and Brittnee chit chat Near the end of the video “Chat Chat”

She was talking about the movie the human centipede and identified one of the Characters (The head of the centipede) as the Chinese guy. I didn’t watch it all but from what I can tell it wasn’t a big deal (That movie grosses me out too much but every year the House guests talk about it I feel like I’ve watched it) Godfrey also mentioned it not being a big deal. Sarah seems to still be talking about it.

Sarah is like your typical bully. Jumping up and down and pointing at every one else’s actions and flaws just so the attention isn’t on her. Some might say that her actions are a game move but what I’ve heard come out of her mouth as of late and the way she putting people down is more of a sign of her exposing her own insecurities about herself. She’s even talking to B with a little more sass now. True colors are definitely coming out. I don’t know Sarah so I’m not going to call her names but what she is showing us is making my observation more of a fact every day.
And I think when B goes home and watches the season, she is going to be looking at Sarah in a WHOLE different light as well.
Everyone is so focused on getting out Zach that they are going to let Sarah take it all the way to the end. If she’s in final 2, she wins. It’s over.

Exactly! However the sheeple on here will defend anything she does and absolutely demonize anyone who’s not on her team. Look at the way people talk about Zach, Bruno, Bobby etc.

apparantly Godfrey had some good convos about woodoo and illuminati with Pili and Asleigh todag. He made stuff up and they bought it. Any chance to be able to see those?

In the main bedroom, around 5 pm, he was spinning his tales. And you are heard right… It was entertaining. Unfortunately it seems uncaptured.

unless sarah makes some stupid comments lik how she tinks se and britts accomplishments are equal britt does not think sarah has done much and would take her. ij other words b is delusional if she thinks the other aent giving sarah credit for all b’s moves…sarahs moves and who knows who elses….even if we know she hasnt

Dawg you have almost passed Ashleigh in the poll. Your getting close to Zach too.