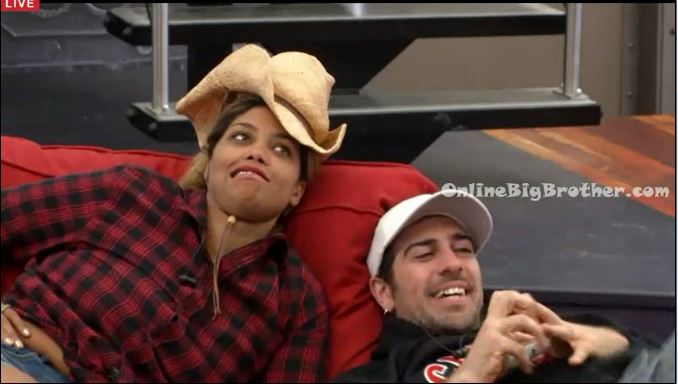 6:30pm In the storage room – Jordan talks to Kevin about his conversation with Brittnee. Jordan laughs about how Britt said Kevin would be upset if she put up Pili. Jordan says you are the least emotional person in here. Jordan says hopefully Captain Canada can win some comps and we can sit back a bit. Kevin says nobody gets that we are .. Jordan says they have no idea we’re the fortress. Jordan says Bobby thinks he’s playing me. He’s a f**king moron. Jordan says once you fall out of the comp Bobby might feel comfortable enough to throw it to me or Zach. We first have to get confirmation from Zach that Bobby will throw it tomorrow. Pilar joins them.

In the bedroom – Sarah says that a kids mind is like an adults on pot. When you smoke up you make so many more connections with your mind. Like with flex thoughts – how many things can you make with a paper clip. A normal amount someone will come up with are 27 things whereas a kid would come up with 150 things.

6:40pm – 7pm Out in the backyard – Kevin, Godfrey and Bruno talk. Bruno looks a Naeha’s backyard photo and says that she would have tore sh*t up in here! Kevin agrees. Bruno asks what would you do if one of them walked back into the house. I’m pretty sure they would walk right back out. Bruno thinks tomorrows HOH competition will be a puzzle. Kevin says if Bobby wins it, one of the guys win it we’re good. Bruno agrees. I think we’re good. Godfrey says the girls are getting nervous. If one of them win they are taking out a guy for sure. Bruno says they made the guys come together. Kevin says as soon as that conversation leaked. Bruno, Bobby and Godfrey head out to the hot tub room.


7:15pm All the house guests are in the bedroom hanging out on the beds talking about random things. Willow finds some paper and Sarah grabs it and says get this out of here! This is contraband!

This sucks. Production seems determined to make the feeds as boring as possible. And I was really looking forward to another, “I’m a healthcare PROFESSIONAL!” moment this season…

Allison’s meltdown, probable cause for lack of booze and feed blocking when there is booze.

I think the best case scenario is Godfrey winning HOH and slapping Zach and Jordan’s asses on the block. If one of those two or Kevin doesn’t go home next week it will probably be too late to stop the Diapers.

Agreed the Diapers need to take a hit.. I don’t care how it goes down.

sad to say imo godfrey will put up sarah and kevin or at leayt brit in order to backdoor kevin if possible. i somhow doubt their desire to put up or get rid of zach versus kevin or a girl any girl

why kevin is so scary is beyond me. he was on the block and won pov just like other ppl wn veto

This is what happens when you fill the house with 4 people who want to play the game and another 8 who are just there to talk about past seasons and daydream about their celebrity status when they leave the house.

Brittnee said that she would never put Ashleigh up until the end because she would get too bitchy? Seriously?

Seriously, could Bobby be more of a doofus?

Everytime Bruno or Godfrey have a plan or the seed to doing something intelligent Bobby is the one to squash it. Sarah and Britt are ready to jump ship and bury Newport but Bobby convinces them if they win to put up Britt and Sarah on the block b/c everyone is voting out Kevin.

Why would S & B work with anyone who makes an alliance with them and puts them on the block right afterward? What an idiot.

He is right about one thing… yeah boys wait one more week because once Zach or JP win (which will happen) and he ends up getting backdoored while he’s sitting beside Godfrey and they don’t have the votes he’ll see his wait another week was stupid b/c they could have possibly swayed the girls and then worked on Willow to keep Bobby. As it is if Zach’s plan works there is no way S&B will keep Bobby and Godfrey made the commitment to Sarah to save his own ass which will work to his benefit moving forward.

However if Naeha (fingers crossed) returns to the house she could align with S&B and Bruno/God to take out the Bromuda Triangle group. and Willow could either be with Bruno to make it 7 to 5 or go to the diapers to make it 6 all.

I’m hoping above all hope it is Naeha returning and that she automatically gets to be HOH or that Sarah, Britt or even Godfrey win. They can put up Ash and Pelee (aren’t you just dying to see if they actually play the game once they aren’t just painting their nails?) or they can come out blazing and put up Kevin and Zach with JP as the renom to take down one of the big guns.

Their goal should be to get out Zach because of how much influence he has. That will force JP and Kevin to make the fortress real but they’ll have Pilar and Ash as their back-ups (good luck with that) whereas S & B’s side will have Britt, Sarah, Naeha, as the female competitors.

Then they should target Kevin/JP with Kevin as the target.

The game would be so much more interesting and I actually think if JP survived he could reformulate the group of Naeha, Sarah and Britt to work with him to flip back and take out Bruno/Godfrey/Willow then Pilar and Ash.

Much depends on who wins HOH and who returns. If I were Sarah/Britt though I’d have a really hard time EVER trusting Johnny again if he returned. I get he is fighting to stay in the game but his approach bombed b/c he needed to chose just one group to go after. Instead he outed a supposed girls alliance to the boys, the couples alliance to Bruno and S & B to the Bromuda Triangle. It looks way too desperate and he’s so smart they might just believe he made the whole gummy bear strategy thing up himself.

Johnny would be on a revolving door

Can we all agree this season is a total shit show?
This cast is beyond dull & the guys are all trying so hard.
There is no one to root for at all really. Sigh

As it stands now this season is very boring and the shenanigans that global is pulling makes it even worse. No a total lose It just needs a little push in the right direction to get the ball rolling.

Totally agree Simon! The twists have been total busts and productions attempts to generate entertainment with things like BBTV have been total duds as well.
Lets have a look at the failures of twists:
1) Canada votes out the first player: A cougar with fake cannons gets voted out by catty Canadian women over a complete flop of a houseguest, who is very hard to even understand much of the time. What was Robyn Kass thinking??
2) Instant eviction: The twist in itself isn’t so bad, but the fact that Kevin had to make his picks before Naeha convinced him to go after Greig and Bobby basically ruined it.
3) Double Veto: Great chance to cause some drama and shake things up, but ya, why don’t we have a POV competition that ensures that the underdogs/nominees have no chance to get their hands on it. A comp that favours men and the majority in the house. Makes for a snoozefest of a week. Production tries to compensate with BBTV which was a total flop as well. Sarah’s comedy routine wasn’t bad tho. The rest was cringe worthy.

WOW Kevin is a big time DOUCHEBAG doing that to Johnny when Johnny used a veto on him last week. There is really NO ONE on this cast to root for, they are all greedy and fake.

Kevin is dumb too, Johnny is a vote for him to stay in the house… I can’t believe how he’s perfectly fine with the idea of sending home, it’s quite embarrassing that he’s getting played by newport

I think I’m in the minority here but honestly I think the house guests are actually good quality. They are annoying at times being overly dramatic and cocky but I actually like how almost all of them are aware of how the game is (well apart from the Pili who hopefully gets booted next week). Each of them are playing differently and it is amazing how they make their moves, granted there is yet to have a “star” among them but this season still has an unpredictability factor which is why I’m still getting excited and have my hopes up for this show.

On contrary, the production SUCKS SO BAD this time, it’s very disastrous how they block the feeds over alcohol drinking, warn the houseguests about talking sex, and give scripted lines while in confessional. And the unfairness of the past two competitions really turned me off. Seriously, I wouldn’t mind watching the same old type of competitions but putting a new one which allows people to work together is a big BS. The HOH and Veto competitions are fantastic because it changes how the dynamics of the house works but if production is reinforcing competitions to which houseguests themselves can choose who will win and lose, then might as well not have them. They can just have them sit down on the diary room and secretly vote on who will win the next HOH and next Veto.

i can’t watch the feed no more because it is so cringey watching that juvenile cast. I don’t mind young players but there need to be a mix. And there are mature young people to cast as well…but ideally more older people. Bruno have no one to talk real to. He needs to lower himself down constantly and i really feel for him in the interactions with the others in conversation. He is doing a good job though, but he must feel lonely in there.
i’m rooting for him.