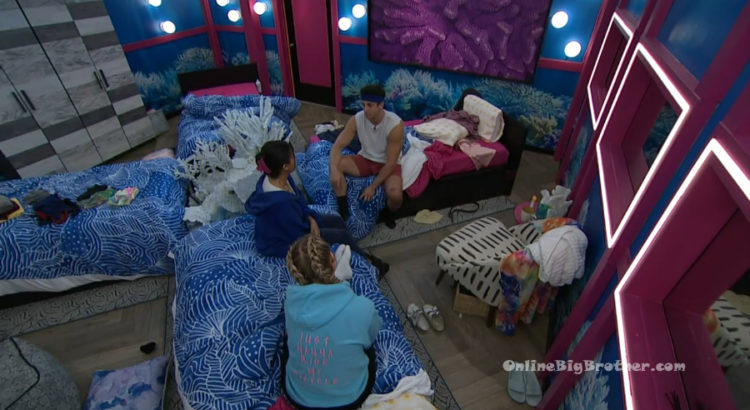 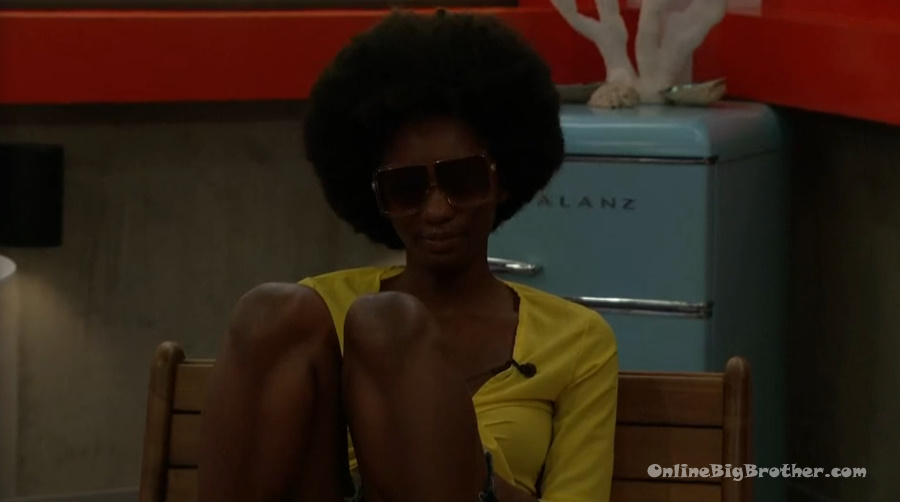 7:27pm The live feeds return from being blocked. HOH room – Xavier, Big D and Azah.
Big D – he kills me. Yeah, when I go to New York I’ll have to change out my outfit because I don’t want no one to target me. I’m like what?! Dude!? Xavier – change up his outfit? Big D – because he goes to New York to New Jersey sometimes in a suit. Xavier – in this house what does that have to do with sh*t? Big D – You know what he meant. Xavier – oh because he thinks he getting targeted just for nothing in here? Big D – because he is probably like the only white boy walking through there with a nice suit on and stuff. Xavier is stunned. Big D – that’s exactly what I said. Me and Tiff rolled our eyes. Xavier – I want to just give him advice like you’re very blunt and I don’t think you say certain things intentionally but somethings you say can be very easily taken the wrong way. I remember he was up here trying to figure out why I didn’t put you (Azah) up. And on a personal level I do enjoy your (Azah) company a lot. She and I relate to things that no one else can. And he said something to someone else in the house, I think it was Hannah. He was like I don’t know why he is making it a race thing. And I was like I wasn’t making it a race thing. Azah – he said that? When did that happen? Xavier – this was a couple of days ago. Azah – this is why I don’t feel comfortable cuddling with you with him around anymore. Xavier – I don’t think he meant anything bad. Big D – no he didn’t mean anything bad. Azah – he knows what he’s doing. You put something like that out there… because he’s had suspicions. That’s why I’ve been afraid honestly to be around you. He said that it was interesting being the only Italian American. Its interesting being the only one here. You know how that is right? Xavier laughs. Azah – if anyone would be able to sniff us out, it would be him. Xavier – he is saying Italian American like he is not white. Big D – Italian American is not a race.

Xavier – I am angling my team towards Whitney (next target) and I think everyone is getting on board with that. Big D – we don’t have anyone on Whitney’s team. You know, I don’t know where Derek X’s head is at. Xavier – and if Hannah was put up no one is voting her out. Azah – I don’t know where Derek X’s head is at now that I think about it. Xavier – I truly don’t think he is going to go for it (HOH). I don’t think he wants it. He is nervous right now. Big D – Ky is close to him. Xavier – that’s why I think he would be kept in check. Big D – what would shake up the house is if Whitney wins next week. Xavier – yeah. Azah – if Whitney wins you’re going to see an afro up on the block. Big D – I don’t think so, I think it would be Alyssa and Christian. 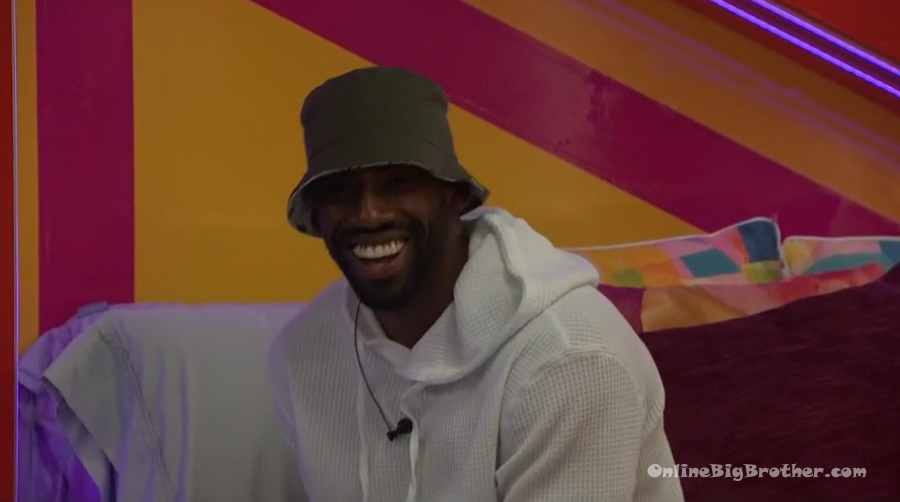 Bedroom. Hannah, Whitney and Derek X
Hannah – It actually makes the least sense for you (Derek X) to gun for this HOH. Whitney – but I think we would have to gun for it if a member of the kings is not out by then because we have to make sure they don’t have 4 going into jury. Hannah – no, yeah I agree. If we hadn’t by next week, I would have to gun for it and I would have to take that shot. Even though I don’t want to be the one to do it. Whitney – we just have to make sure that happens or we’re all screwed. Derek – I am 100% down to throw it. I am a little shaky who the kings would go after.. because they’ve already promised Britini that they wouldn’t put her up for a week. They would have to nominate Azah and Big D. Whitney – and honestly I could see them doing that as the wimpy way out. Brent joins them. Whitney – we’re just talking about next week. Brent – well I’m not going to be here so good luck. Whitney – don’t say that. Brent – so you guys do want me to stay. Hannah – so Alyssa doesn’t know about the mafia? Brent – she doesn’t know about anything. She is mad at X for being left in the dark but its for her own good because we can protect her as long as possible. All I know is she isn’t going to go after our team. Hannah – you know her best would she vote me out over X? Brent – no. She told me that everyone is coming for me. She is betraying her whole team to let me know. This really solidifies how much she trusts me because she is risking her whole team and everyone else in the house to tell me. That is pretty big. She knows the whole house is after me and she still tells me. Why do you (Whitney) look so concerned? Whitney – I am just curious why she is talking so much. Brent – Explains why Alyssa trust him so much because he helped save her in the beginning. Hannah – you trust her? Brent – now I do. 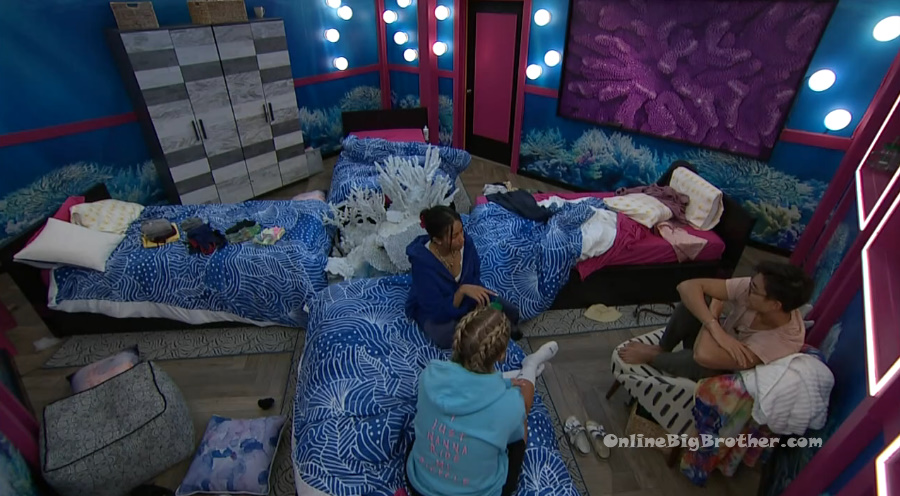 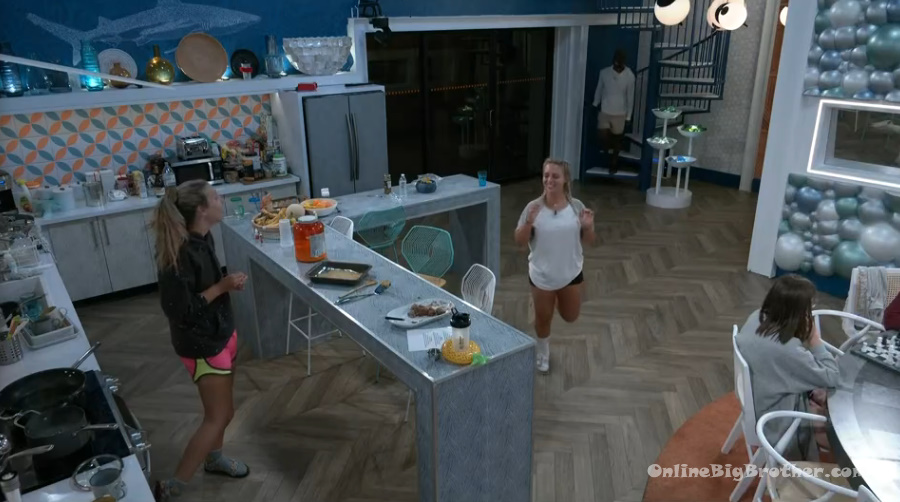 9:30pm – 10pm Hot Tub with beer and wine. Azah, Whitney, Alyssa, Christian and Xavier. They guess each others favorite body parts, honeymoon vacation, etc. They then move up to the HOH tub. 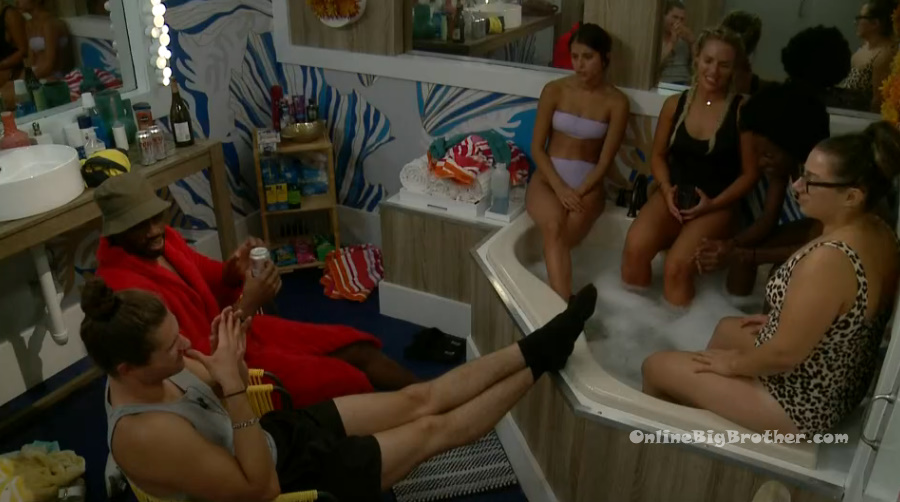 If you like these spoilers please consider a donation to keep the madness going. We accept donations via paypal How to support OBB

Some babes just really look hot in a one piece, and NO I’m not talking about Britini. #SideboobForever #BlondesReallyDoHaveMoreFun