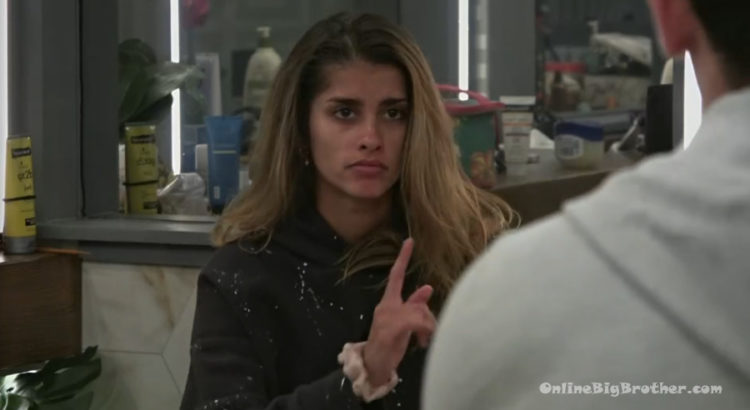 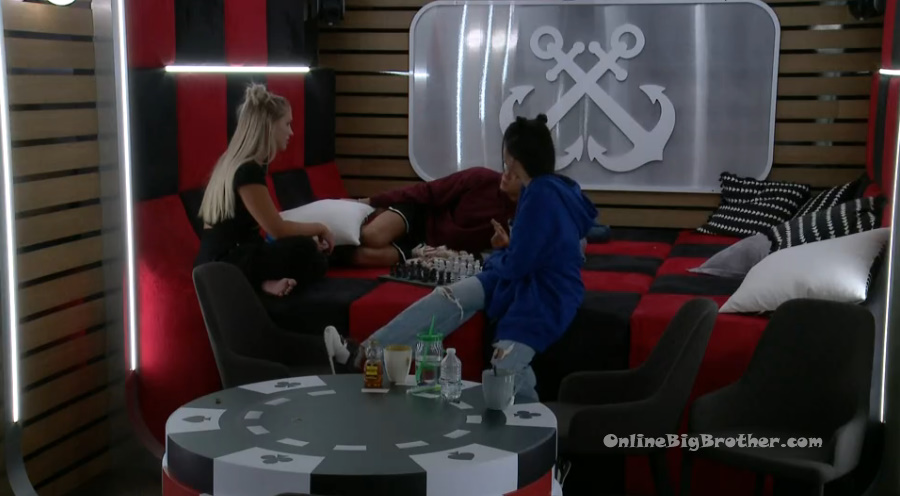 9:23pm Chess room. Derek X, Whitney and Hannah.
Hannah – we’re not telling him he’s going home. Whitney – so we’re all on the same page. Derek – I mean we will have to give him.. do we just give him everything? Whitney – he can go back and watch the episode. I feel like I would just be like there is a pattern of the strong white men going home first. Maybe? No!? Hannah – Mmmmm. Whitney – I just don’t know what we can tell him where he doesn’t take it super offensive. Because if we do tell him – you’re chauvinistic, you’re arrogant, you have a big personality, you’re a lot to handle, no one wants to be around you.. as the real reasons that would really really hurt. Hannah – Mmmmhhmmm. Whitney – I would rather come up with a way where his feelings are hurt the least as possible and then he can go back and watch it if he wants and see oh sh*t I did do that. That is how some people felt. Hannah – I think I will just keep it game play. You speak for the team way too often and way too comfortably. Whitney – I don’t think we can make it about us because then he can blow up our game. Hannah – well even if it was 15 minutes before the eviction what is he going to say? Whitney – you don’t think he would change his eviction speech? Derek – he could. They wonder if they should tell him it was a house decision. 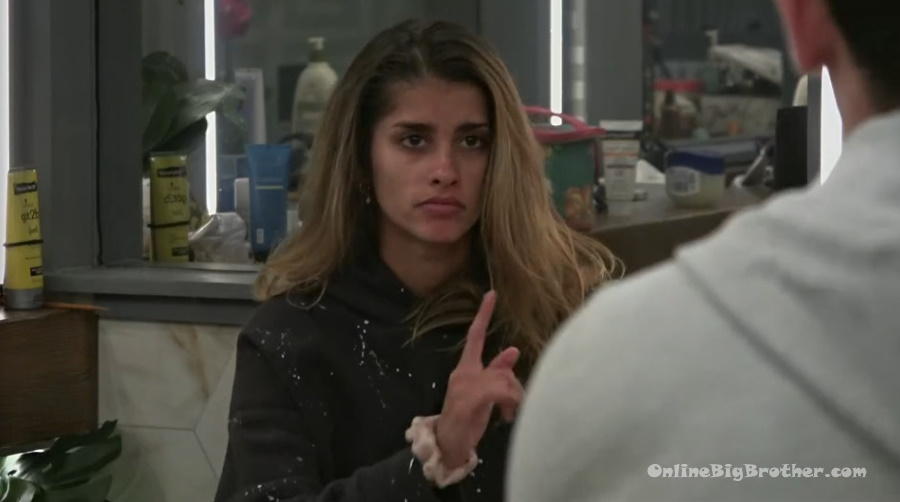 9:33pm Bathroom. Alyssa and Brent.
Brent – he (Xavier) hasn’t talked any plan with you? Alyssa – no, he didn’t want to talk game. Well he talked to Christian because he won the veto. They I walked in to shower and she said I am going to do teams that way we can talk with the radicals and figure things out. I asked are you keeping the noms the same and he said I don’t know yet I want to talk with all the teams but I still want Britini out. Brent – yeah. Since we have the “sewer rat” final two, no one will suspect it at all. Especially if Christian is with us. Alyssa – no one will suspect what? Brent – no one will suspect we have a final two. Like we will be able to go all the way. Especially with the protection I have with my team. Alyssa – and SB (Sarah Beth) and Christian trust me. Brent – I know that’s what I think X is worried about. Alyssa – oh you think out of us four he thinks he is the bottom of my totem pole? Brent – MMmhhmm. If he is willing to take a shot at me as a pawn when I know it wasn’t and proved it wasn’t and I proved it wasn’t. He is planning for next week when teams end and then he is going to have Big D and whoever else. Alyssa – why would you want to align yourself with players like that!? That aren’t winning! Brent – because they’re loaners so their loyalty will be to him. right!? SB and Christian’s is to you. Alyssa – but if he is doing that .. you think he would be smarter than to put you up. Brent – because he tried to use the whole pawn thing. He is going to take on the role of I’ll take you to the promised land, follow me. Alyssa – are you going to talk to Christian tonight? He didn’t say anything but it seemed he wanted the noms to stay the same. Brent – I would rather they stay the same. Alyssa – so you can see the numbers? Brent – Mmmmhmmm. And that way you get information, everyone gets information. Alyssa – but you would think after the veto he would start telling us stuff. Brent – just be careful because X is playing for his future game and he is willing to cut down everyone. If we do it right we can go all the way. Alyssa – but we keep f**king it up. Brent – I know .. I just need to trust at least 1 person.. and that is you. I don’t know why everyone wants to do it on their own. Alyssa leaves. Brent – Ah F**k, why do I feel like she is lying.. 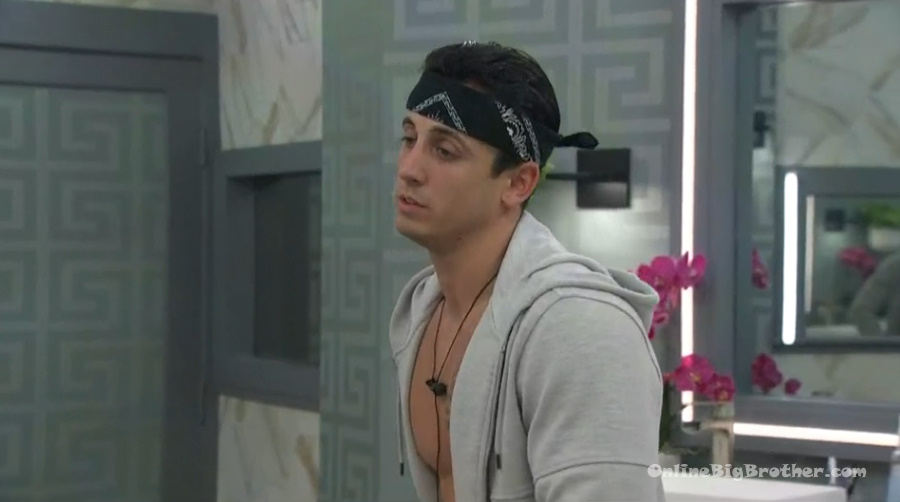 9:55pm Most of the the house guests are chatting in the living room. 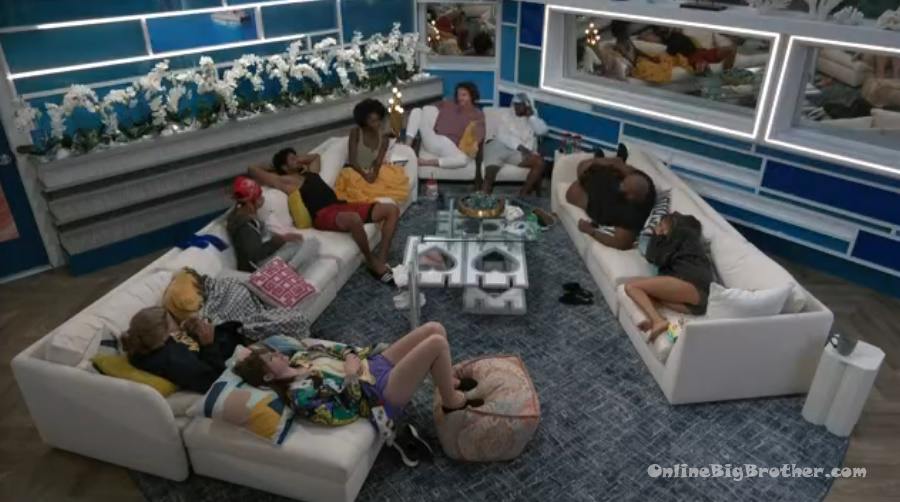 10:08pm Chess room. Derek X, Hannah and Brent.
Brent – my speech is going to be this for the veto.. and tell me if this is too harsh. What I can offer and provide but I would never beg. Actions will always speak louder than words. .. ah but I can’t get aggressive so I don’t know what to say. Hannah – I don’t think that’s aggressive. Derek – yeah I don’t think that’s aggressive. Brent – that is what I am going to have to say to Christian and X. Hannah – I think that is actually a pretty vague speech. Brent – ah, I’m not about these long a$$ speeches, I don’
t give two sh*ts. Mostly it would be I know who I am and I know what I can provide. I’ll never beg but actions will always speak louder than words. Because everyone keeps saying things but no one does anything to prove it. So they wanted me as a pawn.. prove that I’m a pawn. You know? Derek – yeah that’s like what you said so prove it to me. Maybe he will realize he is going against his word. Brent – or maybe I can say that all you have is your word. I want it to be short but powerful. Less is always more in speeches. 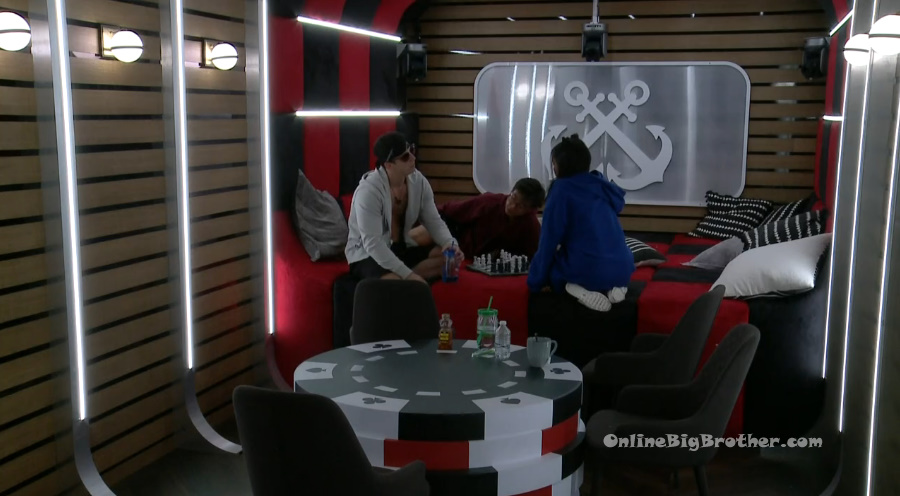 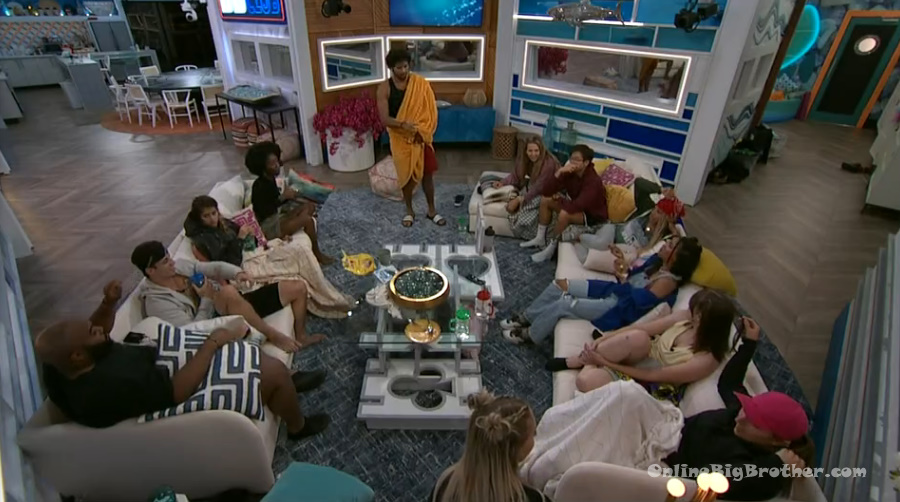 11:35pm Hammock. Xavier and Whitney.
Whitney – its nice that there was a clear target this week and we’re all on the same page. Its been a calm week .. I feel like. Xavier – I was in a difficult position but you guys will break it to him in your goodbye messages and I don’t think he is the type to hold a grudge. He’ll understand that a lot of it was just part of the game. Whitney – I think they only time I would get upset or not okay with it is if I was put up by one of my teammates. Xavier – fair. I love when people talk about having a target versus not having targets. As soon as we walk in this house there are 1 targets. That’s just facts. Only one person wins. 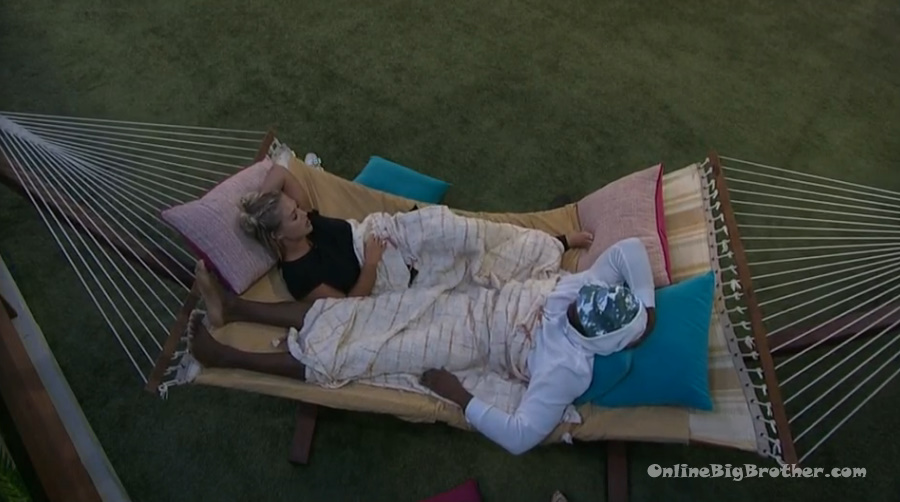 11:37pm Storage room. Tiffany and Claire.
Claire – I don’t know if Derek X is trying to make a final 2. Hannah might. Tiffany – Hannah knows to do it but he doesn’t. And that would be smart for her to do that because she tries to act like she likes him and he likes her so… If he makes a final two with her that makes her comfortable because she’s got a guy to keep her all the way to the very end. Claire – I don’t know if they have a final two but they’re definitely trying to work together. Tiffany – I think she is working with him more than she is letting Whitney know. So whatever she is comfortable telling you and keeping Whitney in the dart I bet you that Hannah is telling Derek X everything. She is close with Derek X .. WHICH is cool, I don’t care about that because I like Derek X. And I like Hannah. And Hannah has always said to us that Whitney is expendable but she wants to keep her as a number. I just think we have to keep Hannah and Derek X almost at the bottom because they are definitely this (together / close).

I am really loving this cast. They are there to play the game, little pettiness and getting personal. They are mature and not so much foul language (I’m showing my age). It’s refreshing.

But I really want to hear their plans regarding all that sweet meet and greet money.