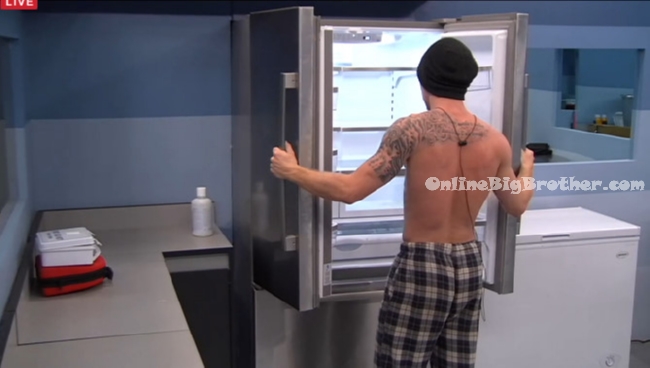 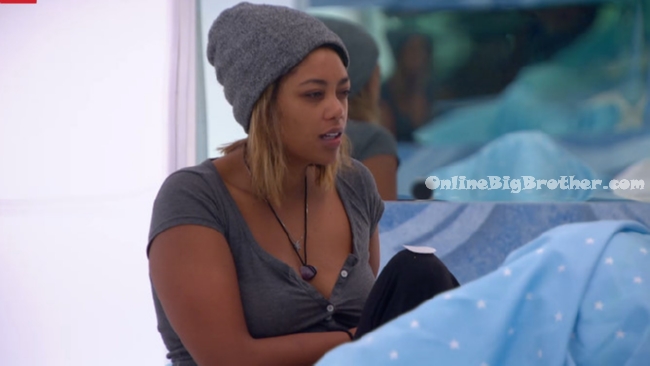 9:30am – 10am Big Brother wakes up the house guests and then blocks the live feeds. When the feeds return – Britt and Jordan are in the bedroom talking about the havenot alarm going off last night. Godfrey had moved his mattress during the middle of the night and set off the alarm. Jordan says if he hadn’t moved, they would have been all right. They wish Jonny a happy birthday again. Brittnee explains how there are sensors inside the room. Sarah asks so you can get out of the room without setting off the alarm? Britt says yeah if you duck under the sensors and do a mission impossible you get out without setting it off. The house guests realize that there’s no hot water for showers in the bathroom or the HOH bathroom as well as the hot tub room is locked. Bobby goes downstairs and checks the pantry for milk and finds all the food has been removed. He heads back upstairs and says I potentially have some bad news. We might all be havenots. There’s no hotwater, no food and no hot tub room. Happy Birthday Johnny. Sarah says BB said you run the water, the consequences will be severe. (They’re not allowed to run the water while they go to the bathroom after Sarah ran the water and flooded the house.) They all agree they’re being punished but aren’t sure why. At least give us a warning. Ashleigh says it could be nothing. Bobby says the pantry is dead empty. Jordan goes into the diary room and comes back out saying they’ll get back to them about why they’re being punished. Bruno checks the taps in the bathroom and realizes there’s no running water at all. Bobby says I bet we’re going to have to earn it back. It’s their whole theme.

Jordan realizes the slop is gone along with the slop chips they made. Of all the days it had to happen, on Johnny’s birthday. Jordan figures they’re get 2 full days of slop. That’s what happened when BBCAN1 Rachelle ate the fuzzy peach when she was a havenot. 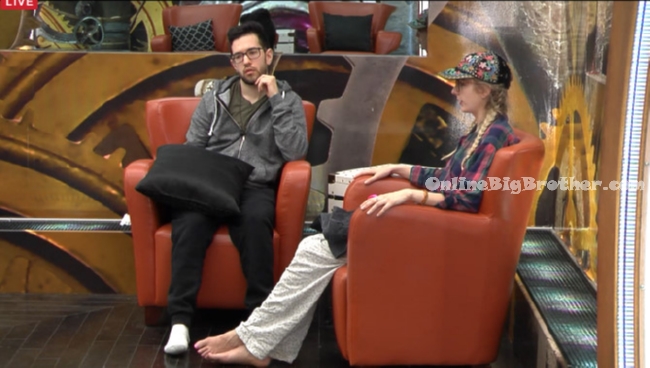 10:10am In the kitchen / backyard the house guests are talking about how someone needs to come forward and admit they did it. Willow says whoever did it needs to go in and really apologize in the diary room. Graig asks them if he should just go in there and apologize for it even though it wasn’t him. Bruno says no don’t do it. If it wasn’t you don’t apologize. Godfrey says I feel bad for you guys because this is what I eat every day. They were told that in the middle of the night an unnamed house guest hit/broke a camera in the backyard. (Big Brother Canada 1 – the house guests were also punished for touching a camera and no one knew who did it.) 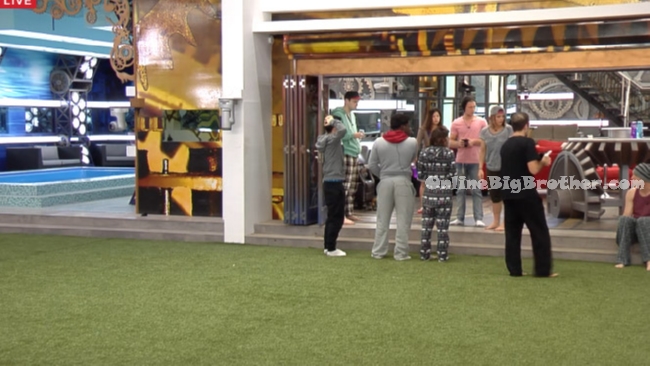 10:30am Jordan suggests they all go into the HOH room and each of them leave 1 at a time for a few minutes so that the person responsible can go into the diary room and apologize without everyone knowing who it was. They all agree they’re family and no one cares who did it. The guys head upstairs and tell the girls the plan and then go into the HOH room. Bobby comments how he’s glad they didn’t take his beer away. They comment on how he’s lucky. Bobby says they can’t mess with my luxury items. Bruno says whoever did it we will not be pissed. Who cares. Graig says I can speak for myself I won’t be pissed. Willow says whoever did it, we will know because they’ll be punished. Bruno comments that the camera in the backyard looks like its broken, its facing the ground. All the house guests pile into the HOH room. They all reiterate that no one will be mad if the person responsible comes forward and confesses. 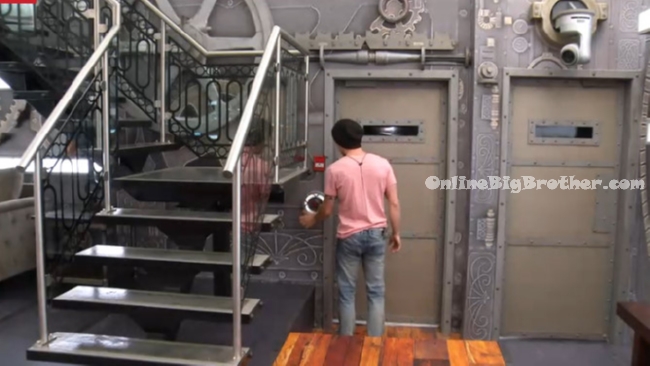 11:30am In the HOH room – Willow, Pilar, Ash, Kevin, Johnny and Bobby are on the HOH bed talking about how Cindy and Jordan made out last night. Willow says JP picked her up. Bobby says JP’s got game. Willow says that Cindy said the only thing holding her back is his age. Bobby asks how old is he? Willow says he’s 21 and she’s 26.


11:50am – 12pm Kevin heads into the Diary room. Naeha goes to the kitchen and looks in the smaller fridge to see for herself that all the food has been removed. Pilar is next and goes into the diary room. Cindy’s next and wanders around the house. In the HOH room – Sarah starts to cry. (She also cried in the Diary Room, when she exited the DR she stopped at the mirrow and wiped her eyes.) In the HOH bathroom – Sarah says to Ash and Bruno “To hear the tone in their voice. I hope someone comes forward. To think someone is capable of that and isn’t confessing.” Next Zach heads into the diary room. Up in the HOH room – Jordan comments that he bets when Zach comes back Big Brother still won’t tell them who broke the camera. After Zach returns they agree to hang around for 5 minutes to see if they get called. 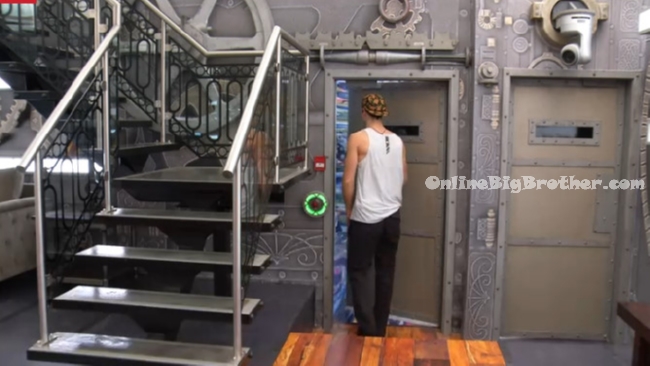 I think the sensors in the have not room are definitely a clue to the secret power inside the room. BB will have to leave a clue hinting towards the room though eventually
Very cool idea. I’m guessing it’ll either be a diamond power of veto or something along the lines of a coup d’état

Bobby is lost in this game and i guess that he broke the camera while in Peter Pan mode. The guy is a male bimbo – and seems to be getting on peoples nerves more than Graig. His lying about trivial matters is bizarre (crying during Soul Surfer, being a virgin) and It is only a matter of time before this sausage-tongued dweeb self destructs like Schwarzenegger in T2 – I predict it happens when he finds out Zach is Ashley’s number 1. Cyberdyne systems (big brother) sends this character back every season but this year he won’t be back. Hasta la vista BOBBY!!!!

they are really being tough this season on the house guests aren’t they? lol

I used to like Kevin, but, his arrogance is not so nice.

is it just me that sometimes think the great and powerful production team creates drama when enough isn’t already happening?
but then again, I sometimes get the feeling that the hg’s are given storyline plot points (not scripts, “suggestions”).

Stan7777
Reply to  another name

What….. are you suggesting that production creates storylines. I will not allow this misrepresentation of production to stay unchallenged another minute! You are a scoundrel to have bad mouth production! Lies I tell pure lies. What would AG say OMW? :)

another name
Reply to  Stan7777

… I’m sorry production. don’t break any more cameras in reaction to people suggesting you create storylines so that the feeds get all boring again. :)
glad I didn’t suggest that certain showmances are manufactured. i’d hate to see the punishment for that.

Omg. Is sarah annoying he sh*t out of anyone else???? “I’m devastated, I’m livid..” blah blah blah YOU FLOODED THE FREAKIN HOH ROOM You fool!!!!! I cannot stand her she has gots to go!

I should also say thanks simon & dawg for the amazing updates…I’m glued to this site!

Thank you! Glad you love our site!

Well she isn’t 1st on the list but she’s a front runner. HG’s I won’t miss when they are evicted. Sarah with an S is simply annoying.

I can’t wait to find out who did it and why!

I love this. Production is not treating houseguests like special snowflakes and will pull the rug out from under them if needed. So different than BBUS where some people claimed they had to be on a gluten free diet (and then scarfed cookies) or couldn’t do something for whatever non-legit reason. If you are there to compete, expect some hard knocks if you are going to not follow the rules!