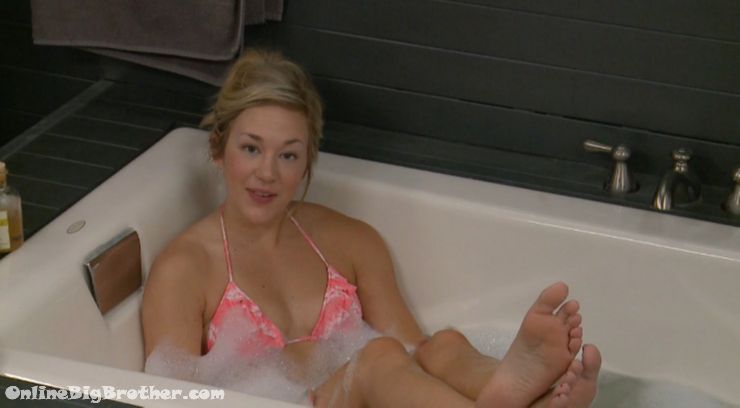 1:38pm Morgan in the bubble bath enjoying her HOH…
Morgan – I’m losing my mind but that’s OK because I have HOH
Morgan – I hope America you see I’m a competitor in this game.. I’m here for the next 2 weeks..
Morgan – So America, Hoping you’re enjoying bath time with Bikini girl
Morgan – I know I was America’s nom and I’m hoping I redeemed myself and got back in your good graces..
Morgan says she’s drowning in Student debt and owes her parents a lot of money
Morgan – I want to go back to school and finish my education,… Kryssie thinks I’m here to LAwdy daw around (that’s why Kryssie is here)
Morgan – she thinks I don’t need the money which is false.. I would love to start the business someday.. I might be just a bikini girl but I’m actually quite intelligent..
MOrgan – Bikini Girl for Final 3..
Morgan says she’ll take Kryssie to final 3 if she can. 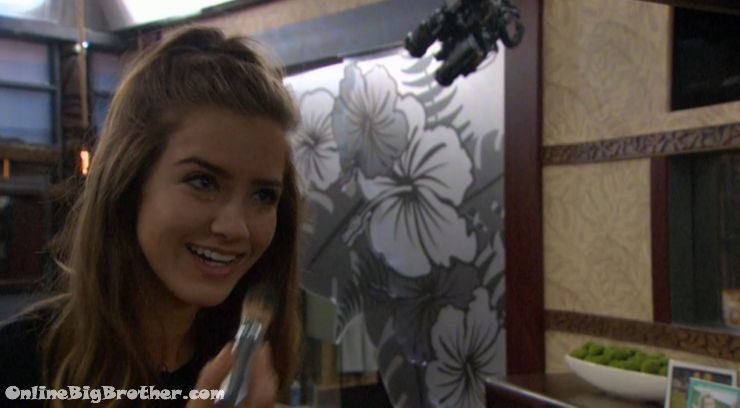 Talking about how Kryussie, Jason and Justin were whispering in the bathroom today. They bring up Jason acting all sad and trying to get people sorry for him
Morgan and Shelby agree they don’t feel sorry for Jason he made that fake final 4 deal with them “Just to mess with us” 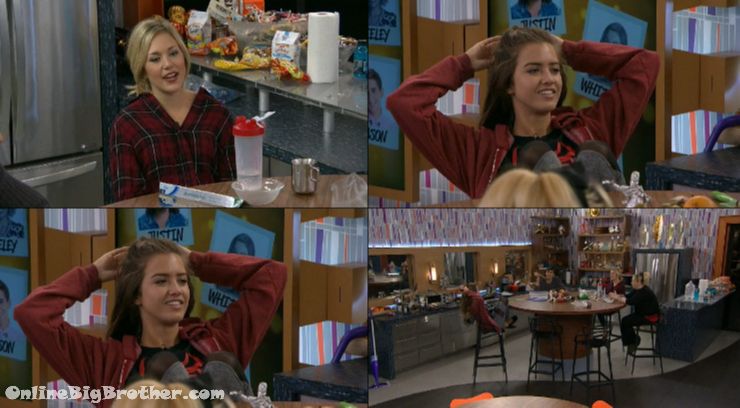 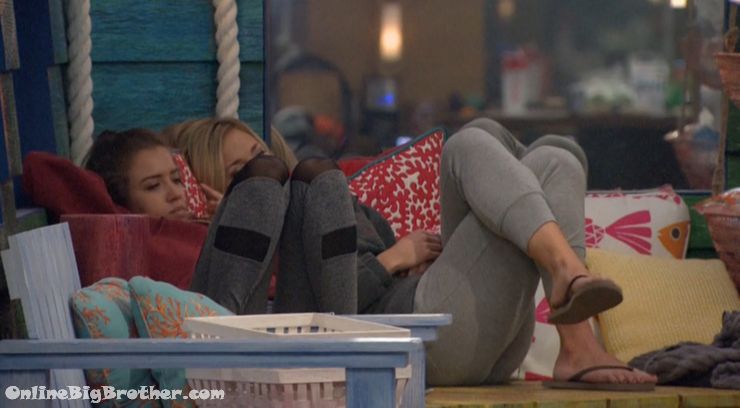 8pm Justin is laying in bed. In the kitchen – Morgan and Shelby are making dinner.

9:15pm The house guests are in the kitchen eating.

11:20pm – 11:50pm Bedroom – Justin and Jason. After, they sit around the kitchen reminiscing about the season. They head to the bedroom. Jason and Justin continue to talk. Justin – I ain’t trying to compete against you. You two are the ones I’m most loyal to. I pick their brains to see where they’re at but I really don’t give a f**k about them. I really haven’t won anything.. its been my social game that’s kept me in here. Jason – they think you’ve been throwing everything. Justin – I really haven’t thrown anything in here. 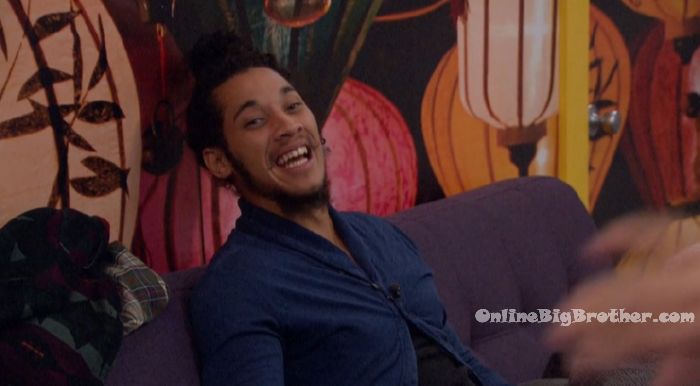 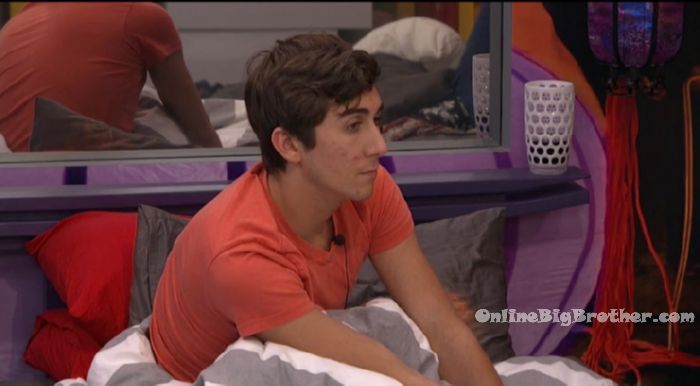 12:20am Bedroom – Jason, Kryssie and Justin are talking in bed. Jason – best case scenario is we’re able to help the person not on the block get the veto. But if it looks like that is impossible then its every man for himself. Justin – I just want us 3 at the end. Whatever I’m telling them… I’m selling them pipe dreams. Jason – oh I know. 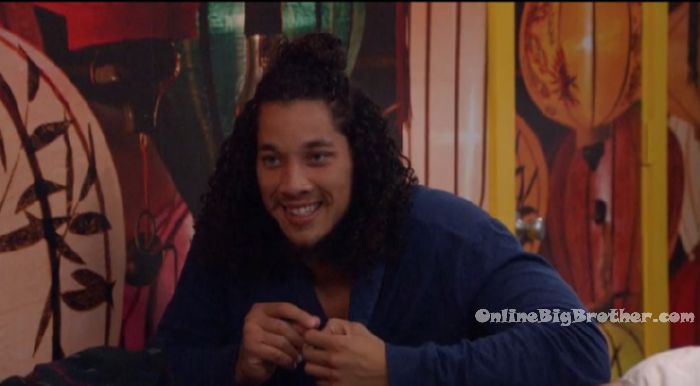 3:30am All the house guests are sleeping.. 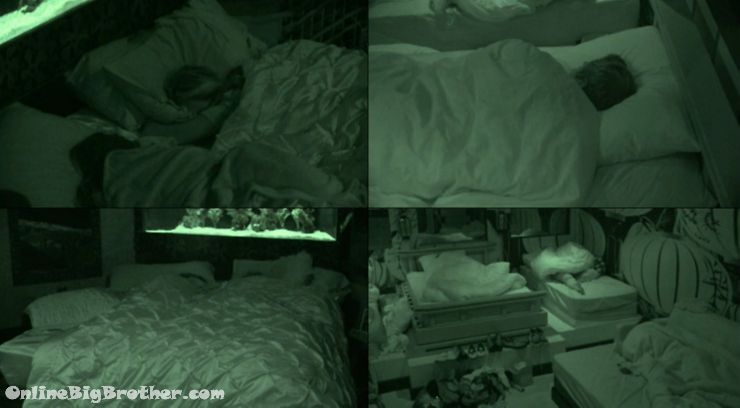 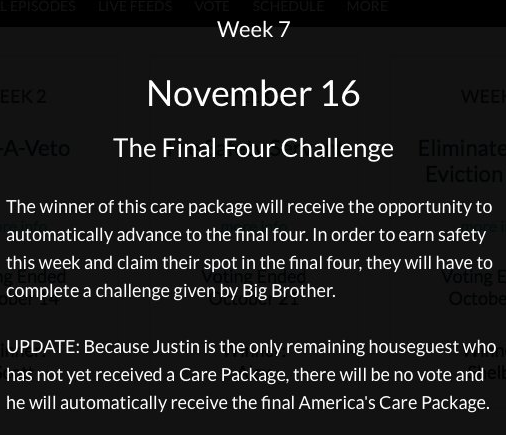 Ugh those rat hair photos are making me gag, lol.

I bet anything that the challenge will be to sing a song or do a pizza dance.

Getting annoyed with Justin and the care package should have been played last week. Never thought i would say it but krissie over jason and justin for third place. Justin has gotten an easy ride this care package just mAkes it easier for him Cant remember if hes been on the block i dont want him to pull a nicole and win over any of the girls!!!

I love Kryssie. Hope she wins!

I hope next season there are no more care packages. Ruins the game of people actually playing. HOH is almost useless with this. And no more vets. They lost..go home and stay home.

Hopefully one of the girls wins veto and Jason is out the door. Then as long as Kryssie doesn’t win final HOH and one of the girls wins veto they can send her packing. I’d love to see Shelby win and Justin and Morgan beside her. Plus it would be great to see the veto winner next week stand up and vote out Kryssie. She thinks she is F3 no matter what. I’m betting she would do a cornbread exit…

Your scenario is perfect. Fingers crossed!

Anything that bounces Jason sounds good to me.

That would be the perfect ending, but in the real world the most deserving person rarely wins. I’m assuming it will be Jason, Kryssie and Morgan in F3

Libtard
Reply to  Said it before and here it is again

Said it before and here it is again
Reply to  Libtard

?
And you are what 3?
How did you glean anything about me from my comment? except that the winner (of BB which is the topic here) is always the one who deserves it bc they did exactly what was required to become said winner.
Logic is now sadly lost on everyone… only emotion is left.
I’m sorry you feel bad, but it isn’t fault.

My perfect scenario is that Shelby takes the win and Morgan 2nd place. Justin will get America’s fav player. lol (For charm not for competition beast as of now)

I wonder what happened to those extensions.

I despise Jason and people like him, I can’t say hate since I’ve never met him but vile, putride, nasty ect… would describe him by his actions and words. He surrounds himself with similar people and is generally a miserable person, only takes real delight in others suffering not his deeds or actions.
I really get his hatred for Alex, Morgan and Shelby he knows they don’t need the money, not that they are rich but he knows they will be successful in life that they have ambitions and have a drive to suceed and it’s people like them he hates the worst. He wants it so just for a minute or a month he can be something other than a cellar dwelling Martyr. He takes more pleasure in peoples pain and suffering then anything beneficial to himself, he could try to improve himself but it’s way more effort than blaming others for his choices in life.
Jason might win this game but he is losing at life.

Great description. You didn’t include in there that Kryssie and Jason are just alike. I’ve never seen a nastier bunch like LNC. All they did this season is be nasty. Pure jealousy. Get out there and make something of your life. Instead of that bitter hatred that engulfs you.

Seems like the interest in this season has waned now that all of the interesting houseguests are gone (or are on their way out) and all that remain (or will remain) are the basic and boring folks with no personality. Who wants to watch this paint drying snoozefest???

The nature of the show means the fri-sun are pretty boring except for the care package..

Ya
Reply to  Simon

I like that it slows down during the weekends so I can focus on other things.

She does look flawless in that Bikini! I think like someone said before it may be better to only have Morgan OR Shelby in the final 3 so the votes don’t get split? I agree Justin has not “earned” the win it seems he has just skated by, has never won anything and has never been a part of any major moves/decisions. I do indeed hope either Morgan or Shelby pull out the win. Shelby has had a target on her back the entire time (much her own fault from what I read) but she has played the game and won when she needed to win. Jason and Kryssie I find both to be disgusting trolls. From that side of the LNJ I would only not vomit if Justin won.

Personally I don’t want to see Justin in the final 3 at all. Yes he is funny sometimes, but a total scatterbrain.

Non BB related stuff will keep the OBB team away for the better part of the day. I’ll post if something big happens otherwise we won’t update until later tonight.

I think Shelby is the best player left in the game. She can strategize and win comps.
Jason is a close second, he can strategize and has a good social game (even though I do not like him) he has convinced the house to leave him in the game for this long.
Morgan seems to have a strategic mind but needs Shelby to finalize ideas. She’s won a couple of comps, and I think she could win more.

Kryssie and Justin have done nothing the whole game.
Kryssie is the goat everyone wants to drag to the end.
Justin is a hard decision. Any other year he wouldn’t stand a chance, but this year he may get a lot of votes just because he’s popular.

Is there an America’s favorite player this year?

Do we know how next week is going to play out to get the final 3?
Will it be a HOH and a veto holder like a typical final 4 situation. Which is kind of unfair because the person off the block shouldn’t be able to pick the final 3 finalists, it should be the HOH decision!
Or will they do some sort of 3 part final HOH like they do to determine the final 2? I’d prefer to see a 4 competitions, if you win 2/4 then you secure your place in the final 3 and get the final vote to evict. And if needs be there will be a 5th competition if everyone wins 1 or two people win 2 competitions!

I’m so sad that Danielle was voted out and evicted.
Is there any way we can bring her back>>>>>???

I was glad to see Dani go BUT was happy with her classy exit. She was another one spewing hatred for the girls and lacked the very class she exhibited in the end. I hope they ALL read what WE SAW and realize WE SAW THAT and hopefully regret those behaviors. I agree both sides had their moments but the spitting in the tub, rubbing armpits on pillows and Jason threatening to put the other sides SSN’s on the internet?! I hope he’s voted out this week strictly because of that. IT’S A GAME!

Jason has to go

Your coverage of bbott has sucked.

Sorry u weren’t happy. We never said were covering this season full time.

BTW… Justin won the care package and completed the comp. Pov on monday determines who goes home. Jason or Shelby

What
Reply to  Simon

Jason or Shelby ?
Morgan put Shelby on the block?
If so
why?

Simon
Reply to  What

Justin can’t go up because of the care package

Simon/dawg, you guys have done an amazing job!!! If peeps wanted to know more, they could have paid for it. It was excruciating watching live feeds sometimes. But if you want minute by minute updates, watch the f’ing feeds!! Love ya

Hiss!!! Go somewhere else then. I appreciate all your coverage. Thank you!