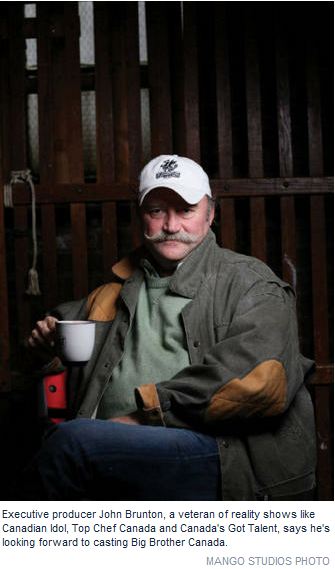 Less than 24 hours after the press release regarding the newly scheduled Big Brother Canada edition, John Brunton the executive producer says that he has already been overwhelmed with hopeful hosts and contestants wanting to be a part of the show.

Burton stated that the company had their first pre-production meeting about the new series on Thursday. He says that they are hoping to begin shooting early in 2013 at a location somewhere in Toronto. Burton continues saying that he is looking forward to casting and says that it is the absolute key to any reality TV show to cast the right people.

“The casting is going to be so much fun, because it’s kind of hot mess TV a bit,” he says. “We have experience doing that from our other shows, but this is different from looking for people who can dance or sing.”

They plan to cast their net as wide as possible but states that they are still in the process of figuring out the exact details of the casting procedure.

The production company, Insight Production has partnered up with Endemol, the company responsible for spreading the big brother franchise around the world. This partnership was a perfect fit, as Insight Production has a long history of creating reality TV shows in Canada, such as, Canadian Idol, Battle of the Blades, and Canada’s Got Talent, just to name a few. Burton went on to state that although those reality TV shows have been a great success, they do not even compare to the scope being put forth for the Big Brother Canada Series.

“This show is a major viewing commitment, three hours a week, but the complications of pulling it off as a production are really exciting to us. It’s new technology, it’s building a house inside a studio that you can shoot in, that people have to live in, that has real plumbing and all that stuff. There’s something really fascinating to us about the format and to us it’s a big, big, big show. It shoots for over 70 days, 24-7, and it never stops.”

It’s not surprising that the news of a Big Brother Canada has spread like wild fire with hopeful contestants and hosts vying for their shot at being a part of the first Canadian season. We are excited for the new reality series and cannot wait for new details to be released. Stay tuned for more information about the Canadian edition, including how to apply to be cast on the new series. If you are serious about applying, you may want to read up on the book written by Big Brother 10 Winner Dan Gheesling from the US series: How to Get on Reality TV. It is also worth taking a look at Susan Monson’s new book called
Me on TV: The First Ever Kick A$$ Guide to Get You On Any Reality TV Show.

Hopefully, it would be Toronto Ontario Canada!!!!!

Simon I know this is off topic and political but how bad is the “maple spring” up there going on. Mainstream media isn’t saying much about it down here but when you look at the alternate news it sounds fairly serious.

From my understanding it’s pretty much regionalized to Quebec. Honestly though I really don’t know much about the issues being protests, I think it might be based on funding cuts to education. I haven’t noticed any major protests in my province of BC yet, but in the coming year things are going to get crazy in BC. The tar sands are becoming a major political/environmental issue in the west and a proposed northern pipeline is going to be the biggest political issue in BC for this decade.

Canada is undergoing more than usual civil disorder right now probably based on a government passing laws that are not popular with the majority of Canadians. The major political parties in Canada are the Liberals (Centre-Left) NDP (Leftish) Conservative (Right). The Conservatives were able to win the previous election with a majority of seats and 39% of the popular vote, NDP got 31% and Liberals 19%. The remaining 10% of the vote was split among smaller left leaning parties like the Greens, Block, marijuana etc.

In parliamentary politics if a government holds a majority they can pass any law they want. The only thing stopping them is our upper courts, charter of rights and of course protests.

If there as any one living in Quebec please shed more light on the problems happening there. I hope they are not renewing talks to separate from Canada.

What I’m referring to is the education cuts you mentioned and bill 78 which was rushed through your Parliament to allow the police to crack down on the protesters. The next day after it passed there was supposedly instant mass civil disobedience in protest and some of the videos show pretty brutal police actions with over 2,500 arrests.
Glad to hear you haven’t been affected yet and look forward to the replies you asked for from your fellow Canadians, I hope for the best.

Will Big Brother Canada have live feeds? If so, will American’s be able to watch it? And will it be at a different time of year then the US Big Brother? I hope so!

No idea about the live feeds yet.. hopefully they do have them. For me the 24/7 live feeds is what makes BB great

I already posted something similar to the question that iam going to ask,but for some reason i don’t see it here.Are either Simon or Dawg going to write about what happens on the show The Glass House?So we are able to come here and talk about the show,the way we talk about BigBrother.I understand if you guys won’t have the time or aren’t able to write about the show.Iam aware that the both of you have a life of your own,that might make it difficult to do what iam asking.But i thought it wouldn’t hurt to ask you guys.I like how we are able to talk about what happens on BigBrother.So for me,being able to come here and talk about The Glass House,will make wacthing it more interesting.

we’ll be watching and blogging about The glass house. I think Once BB starts we’ll be taking it a bit slow on glass house but until then we’re going to try and give it similar treatment that we give BB
here is a link to our new site. http://www.abctheglasshouse.com/