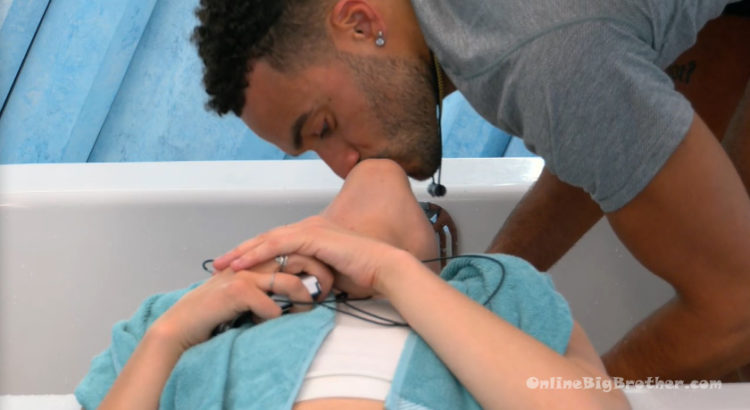 Big Brother spoilers – Vic is nominated her campaign is strong. 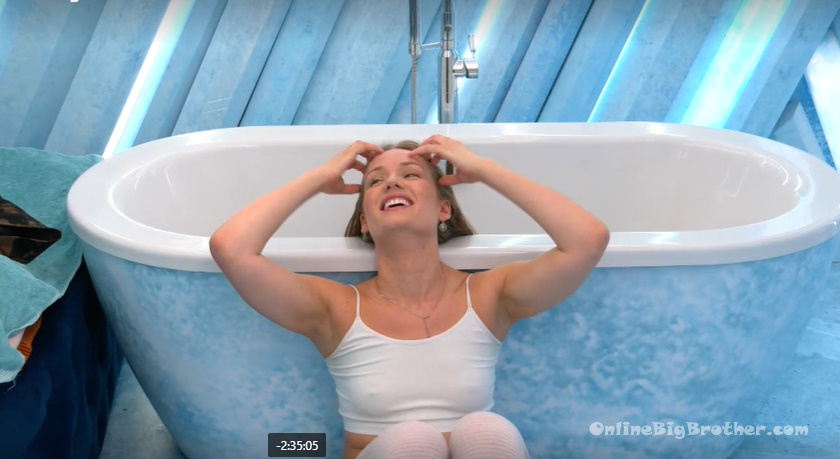 11:20pm HOH bathroom. Jed is washing Beth’s hair..
Beth – this is so nice of you. I thought you were going to tell me to bug off! Jed – this is what married couples do. Beth – you would do this for me? Jed – yeah, I would take care of you. Jed – who are we evicting? Beth – Vic. Jed – yeah? Beth – yeah, we went over some crazy stuff when you left. Jed – did you? Yeah I talked to Tera again in the bathroom. Beth – is she falling? Jed – no, she’s just upset. She is just mentally sad ..like emotional. She was like I haven’t been talked to like that since high school. Jed – yeah, you got f**king roasted. Beth – especially when Vic walked away. Jed – she was just saying how emotionally exhausted she was from today and how she had all these pitches she wanted to give tonight but I said just do it tomorrow. Beth – good. I get that and prefer that. Jed – I said that all people want to hear is that you give your word for not coming for them .. and just giving that as a promise because people do trust your word because you haven’t given it much and you play by it. So if you’re going to be promising people things just make you promise people safety. That’s all they want to hear. Beth – what did she say? Jed – she said yeah. And she said I would never put you guys up as a clear target in the house and I don’t want this sh*t storm to happen again so if I win I don’t want to be involved in such a crazy thing again. I would do what the house wants. Beth – do you believe it? Jed – ah ..I honestly do, yeah. Do I think she will win.. na. If I think she does .. I think she will do what she says. Beth – we went through Vic’s resume .. and every single week she has done something. Jed – that’s dangerous. What did she do week 2? Beth – its actually crazy. Week 1 – she wins the first HOH ..ever. And she was the only vote to keep Julie. And no one thinks anything of it. Jed – week 2 she was the vote that saved Rohan. Beth – week 3 she wins. Puts Keifer and the block and gets literally the biggest player out of the game. Next week .. no blood on her hands. Doesn’t even go on the block. Makes a deal with Keifer. 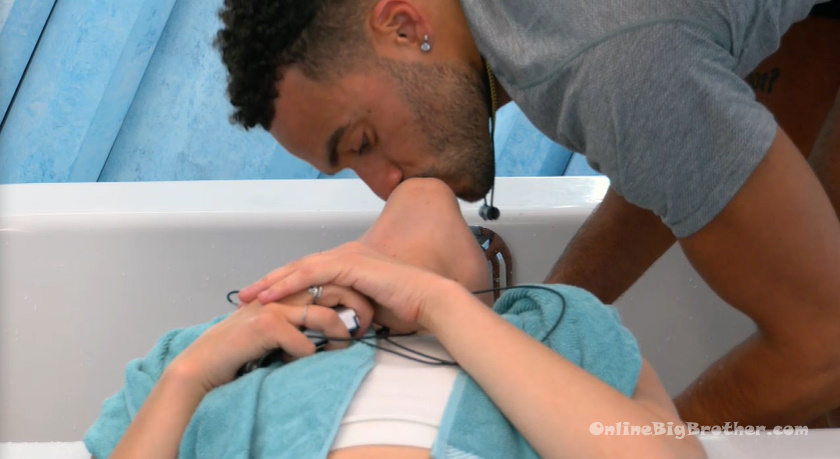 12:30am Bedroom. Keifer and Ty.
Ty – I am never going in that room. That was awkward! Everyone is face down, a$$ up! Keifer – she literally only went for people in that room. Ty – what a sick game this is. Keifer – everyone in this room went unscathed. She was going to go for Brey though. Ty – talked her out of it? Keifer – yeah. Ty – oh man, I really want to keep her but I know its not best for our games. Keifer – I want to keep her too. Ty – the emotional side of me, really wants to keep her. Keifer – me too. Ty – I love spice. Keifer – I hate this. Ty – I know. Oh man, where did she go wrong? Hey, had I won the veto we wouldn’t be in this situation. Keifer -exactly. Ty – its my fault, its okay! I’ll take it. Keifer – Jed should have won.. the HOH. Ty – that too. Those two things happened .. we’re not in this situation. Keifer – because we could have gone for a back door.. and maybe Roh doesn’t get picked. Ty – yeah, I take responsibility for my part in this one. That’s why I don’t think she understood the magnitude of what I was feeling.. when I did not win the veto. The plan was Roh first then her. Keifer – I really think she would try to take us to final 3. Ty – I agree with you. BUT then again if we really want to keep her .. we could.. Keifer – she would come for Beth. Ty – do you think we could get out of it? No? Keifer – no, she would get Beth. She would put Jed up next to her. Ty – you think so?! You think she puts Jed up? keifer – because we ain’t going to vote Jed out. Ty – and we can’t save her. F**k! That’s assuming they stay on the block.. I don’t want to be in that situation though. Keifer – exactly. Its a potential situation. We just know how she gets with power. Ty – she will make Beth pay for putting her in this situation. Keifer – do we want to protect Beth or Vic? Ty – Beth is essentially trading Vic for Brey. Because she prefers Brey.. because Brey prefers her. That is the reality. Brey is a number for her .. Vic is not. Keifer – its going to be hard to have conversations because Breydon is going to be around all the time. Ty – I know.. I struggle with it. Keifer – I just won’t do it. Because its going to be me .. the next time I win HOH .. I’m going to have to be the one to send Brey home. Anyone else it would cut deep, deep! Ty – I know. I know. I would do it too. I would hate it but I would do it. Keifer – its getting to the point where we’re aligned with everybody. This one is making me feel sick. Ty – she saved us. Keifer – maybe we just save her. Ty – if we want too .. we can! And Jed with do it if we say. Keifer – I honestly think she could be the best player .. ever! Whoever takes Vic out wins the game. ..if she survives this. Ty – maybe we save her.. because if she gets close to winning she is taking us with her. And we could take her out at the last minute. She is not beating us with days. I can tell you that much. Just sucks because we have to climb over her and Roh.. even still.. 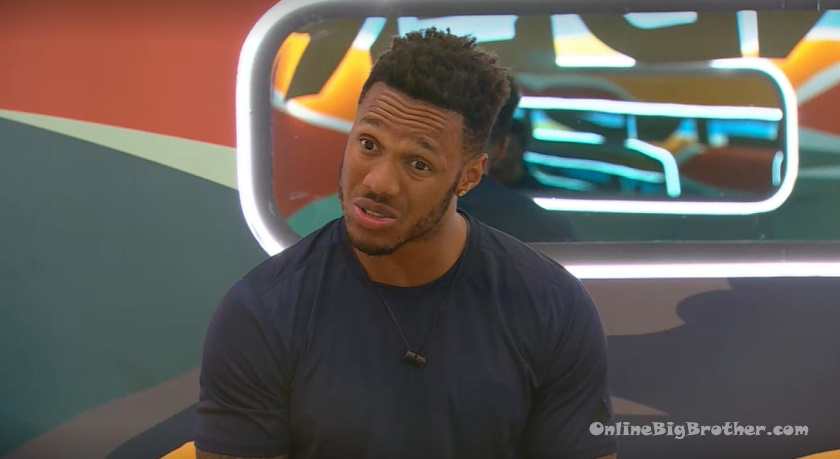 Jed, Ty and Keifer.
Jed – a seven person alliance .. just for half of them to go home!? Just to be dismantled by the butch?! They got dismantled! Ty – Odd Balls eh!? Jed – F**k I should have said that in there! Odd Balls eh?! Alright .. cool! We’ll see who’s odd now?! We’ll see who’s the wild man out now!? Brey and Beth join them. we’re thinking of walking in that room and going “Odd Balls’ eh?!!” Jed – its feeling pretty f**king odd in here! Breydon – why kick them when they’re already down on the ground. Ty – who is down!? Keifer – that whole room! Ty – Are you dumb or are you stupid. How can the whole room be down?! Keifer – it is literally night and day. Ty – hold on lets analyze this for a second.. One man is eating steak in there. He is good! Brey – one girl is on the block. The other girl is on the block. Her best friend is on the block. Ty – she is good though. Not everyone is going home in the room. Breydon – but one of them is. Ty – there are three safe people in there. Breydon – and two of them fought. Beth – Ty is such a di*k. The longer you’re in here .. the more ruthless you get! Keifer – Beth! you’re one to talk! Ty – Backdoor Beth! Keifer – she is the most ruthless.. we called it! Beth – we’ll watch these f**kers when they’re on the block. We’ll be like .. well isn’t this ODD?!! Keifer – you’ll be watching from home that’s what I’m thinking! Jed – a lot of talk from someone who isn’t playing Beth! 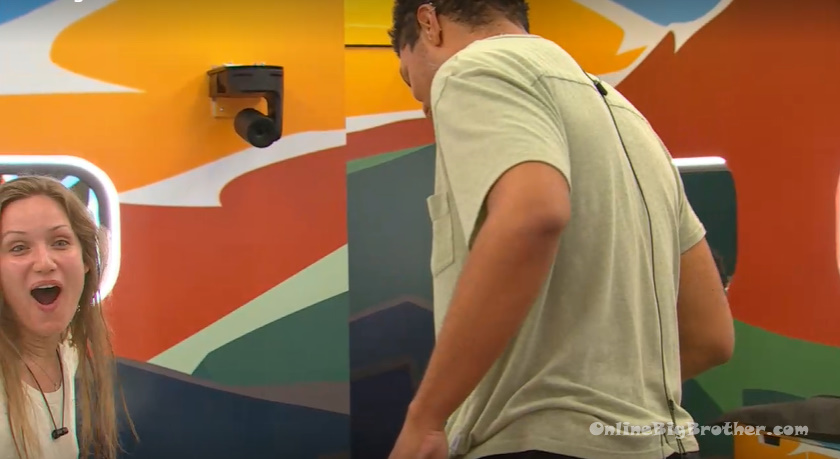 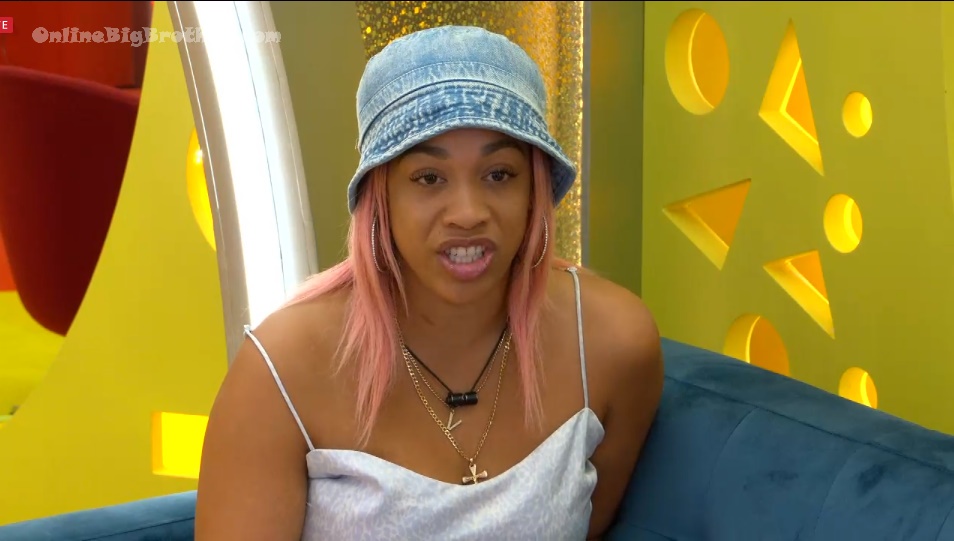 Today is going to be filled with HARDCORE Vic campaigning swearing on god, The sun, her boyfriend.. DEAD A$$ all that stuff. That will be followed up with waffling x10000.

I wonder if production for this season is in jeopardy now that non-essential business is getting shut down again. Technically BBCAN is non-essential. Might have another season 8 on our hands.

Simon
Reply to  Guy from GTA

Wondering that as well. So far I haven’t heard anything about filming specifically.

anyone know the brand of ro’s party shirt?…
i think i wanna get one haha 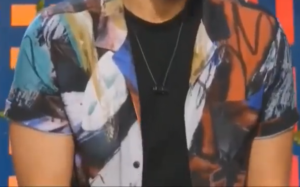 Reminds me of the great search for the bear Shirt Judd wore.

10:14 am Wednesday morning
Today is going to be filled with HARDCORE Vic campaigning swearing on god, The sun, her boyfriend.. DEAD A$$ all that stuff. That will be followed up with waffling x10000.