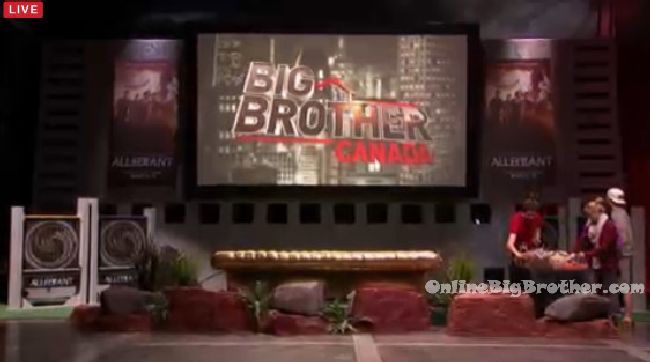 5:20pm Dallas, Maddy, Joel and Loveita head out into the backyard to watch The Divergent Series: Allegiant movie première. Big Brother shows the movie set up in the backyard with a projector screen and a couch for the four to watch the movie. They also have a full set up of movie snacks, drinks and candy.


5:35pm In the bedroom – Jared tells Raul about his talk with Loveita. Kelsey asks what are we going to do about Cassandra? Jared says we’re going to try and keep her off the block. Kelsey asks do you think we should continue to trust her? Kelsey tells them about how Cassandra told Loveita if she won the veto she wouldn’t mind if she used it and put me up. Is she just working every angle? I want to trust her but AHHhhh.. She switches sides with whoever is in power. Do we keep her and trust her? Jared says I could careless if we keep her. If we do are we just pissing off Loveita? Kelsey says she doesn’t care. Jared tells Kelsey to stop helping the brothers. Kelsey says she’s not. Jared says I do’t want to talk to Loveita, but im the only one that can, you guys freak her out. Kelsey says I just had an hour talk with her because we had to hangout. Jared tells Kelsey to stop b***hing about Loveita in front of everyone because people are telling her everything.

In the HOH room – Phil tells Nick that I wouldn’t put Loveita next week because she kept us safe the first week. If I won HOH, I would put up Christine and a mutual person that people want out and then if she (Loveita) doesn’t win the POV I would put her up. 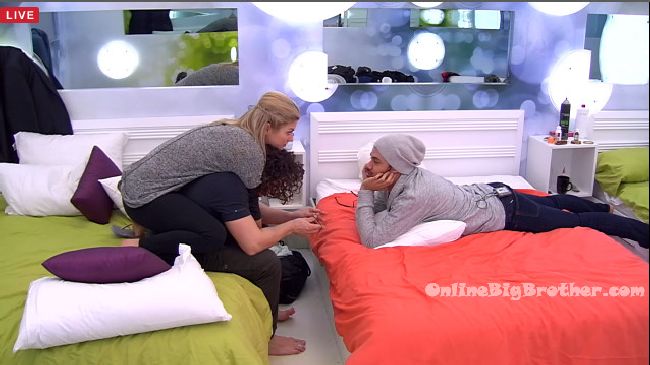 5:45pm – 6:55pm Big Brother blocks the feeds… The feeds return with all the house guests on a pink bedroom lock down. 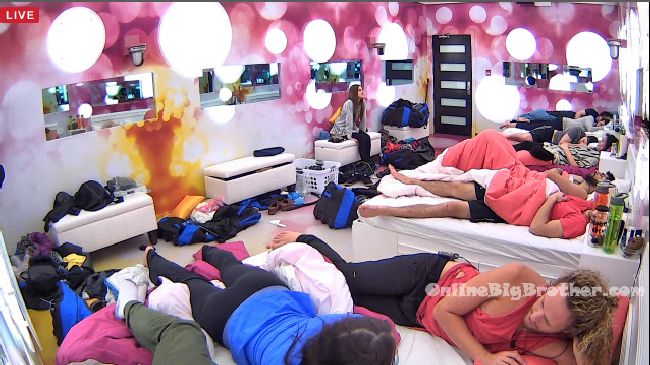 6:30pm – 6:45pm Bedroom lock down continues. Tim, Cassandra and Mitch are on a bed talking. (Mitch is more just listening) Tim asks Cassandra if she won HOH who she would put up? Cassandra says Dallas and Maddy. If you’re not working together it shouldn’t matter. Tim says that Loveita’s nominations stopped the rock throwing. Cassandra says I’ve got to get her out. Tim says there are bigger fish to fry. Cassandra asks Dallas? Tim says he’s still working out. Tim says Maddy and Kelsey won’t be able to form an alliance with anyone else. Tim says Loveita could have put up Kelsey, Raul or Jared up. Whatever deal they made offered her more protection than you did. She put up people that didn’t piss off both sides. Retaliation moves aren’t usually the smartest move. Big Brother ends the lock down.

7pm The house guests are eating / chatting in the kitchen. 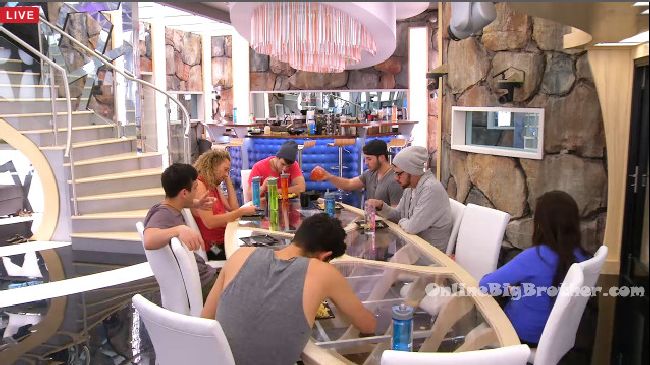 Wow, I thought I ate a lot at a Movie Theater but they seem to have taken a pound or more of candy each….

did dallas get to choose 3 people, because he won POV, or did Loveita get included due to being HOH and Dallas picking 2 others. i could see him picking loveita as HOH, and maddy of course, but Joel is a wildcard there other than him being a Have not and this is a nice gesture for breaking that have not week

I just don’t understand Phil. Loveita warns him of the plan to put up the bros and he seems to be turning on her, what kind of logic is that. He should see her as an ally and protect her.

reminds me of Bruno’s insane rantings about Sarah & Britnee. Gets an idea in his head and runs with it, even tho it literally would have made more sense for him to sincerely work with Loveita. even he would have to see that Nikki and Loveita are close, and he wants to get closer to Nikki, all these comments about Loveita, and fakery, isn’t going to get him there. he has no legit alliance with any group or people, it would have been simple for a sincere person to go to Loveita and try to create something with tim, nikki, mitch and joel, and cassandra for that matter. numbers would have given loveita the necessary support to go a different direction, or even the same direction, just instead making Christine the main target, and one of the 3 as backup, wouldn’t really matter which went or stayed. loveita still has very legitimate reasons to not put up Dallas and Maddy, and Ramsey for being the only ones in the house that respected her nomination target in Week one, no one would fault her for not complying with their own wishes to remove those 3/.

phil is freaking twisted. i know he said he wished that he could split from nick and play alone but quite honestly nick needs for that split to happen so he can get the hell away from phil and play alone. phil is going to drag them both down and if he’s not careful thats going to happen this week

phil is pretty tough on him

How is Maddy beating Dawg for top 3 faves in the poll? Where is the love?!?!

its a no brainer, why keep someone like christine who will work with dallas, ramsay, maddy?

who cares what loveita wants? she doesnt play hoh next week, the voters will decide

third wheel is collectively alot dumber than i thought, i particularly thought jared was smarter than that

The three have been allowing themselves to become paranoid about who Loveita is in an alliance with. I get the feeling they worry that breaking their word with Loveita would set numbers they have been using in the game so far to turn against them. It also reflects poorly on the image Jared is trying to project for himself in the game as the honest straight shooter. He gave his word, breaking it reflects badly on him.
Attacking Loveita and Sharry in retribution was fine because it was three plus their four buddies against two. Two weeks later they are thinking Joel and maybe the brothers have joined with Loveita. It’s more of a fair fight now for numbers if they keep the war going while Dallas and Maddy are waiting in the wings to attack while they concentrate on Loveita.
That was my read in regard to their paranoia. Perhaps I give them too much credit?

they should realize that once veto is played or not, loveitas power trip is over, they can then work with whoever they like and as they dont particularly like or trust her it would be strange if they chose to do so

next hoh love doesnt play, joel and mitch wont be wanting to win the comp and nikki probably wont, so its likely she wont have any influence over noms

Sometimes i wonder if some of the houseguests are just shuttled into the high roller room for hours at a time, and then set free for quick sighting before they disappear again. If Ramsey were a character on a series I think he’d be extra # 7. Sometimes when he shows up on screen i feel like I’ve sighted the loch ness monster or bigfoot.

could you imagine he makes final 2?

nice guy, but just not good casting for big brother