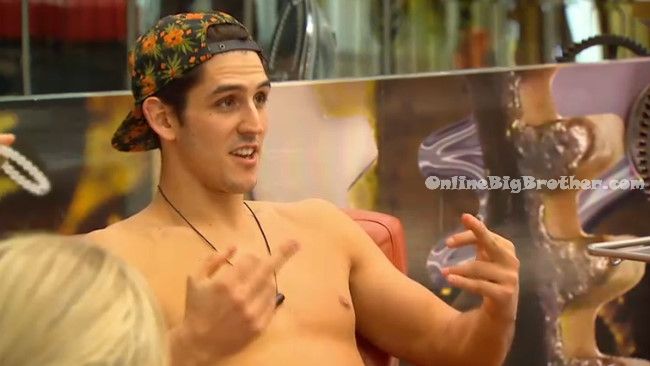 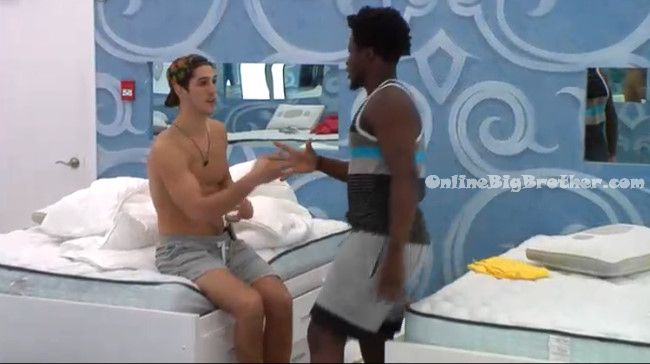 4:30pm In the bedroom – Zach and Godfrey are talking about how if they keep Bobby they will gain respect from the 5 girls. Zach says if we keep Graig then we make 5 enemies. Zach says this way if one of the girls wins HOH we’ll be in good with them.

4:40pm – 5pm Zach heads to the bathroom and hugs Ashleigh. She tells him she’s watching Bruno shower. They head out of the bathroom and talk in the chairs. Zach says he’s worried about winning things. It’s bad for me to be seen winning things. Zach tells Ash she should stay with the chop shop and have the other 3 guys in front of her. Zach says the chop shop thinks they have JP too. Both sides think they have more numbers than they actually have. You just have to make sure people think you add value to their game. Zach says theres two ways to play the game. The social way to get people out or to win competitions to get people out. I’m playing the first way no until I have to play the other. Zach says until someone takes a swing at us there’s no need to go nuts. B is really starting to drive me nuts. Willow joins them. Zach throws up two middle fingers and says we can pretty much go like this to the other side of the house.

4:40pm – 5:45pm Out in the backyard: Bruno and Godfrey talk game about Bobby and Graig being on the block. Godfrey says as it stands its 6 against 6. Bruno says Kevin has 2 votes. Whatever he votes, she votes. Bruno says he will try and work on Willow. Bruno says Graig over played. Godfrey says he played like me on day 2. I was pulling a Devin yo! That’s why I’ve just laid low. Bruno tells Godfrey that he likes him the most. God says me too bro. I am pissed that it came to this. Out of no where! Graig joins them and says keep me. They’re not coming after him. Bobby’s the one getting in with them all if you haven’t seen. Godfrey says they’re going after threats. Graig says I hope I can convince Zach to keep me. Graig says Kevin will not vote against the house. If you tell him to to keep me, he will. Bruno says I can’t keep pushing for you because I’ll be the next target. Godfrey says I highly doubt Johnny used the veto on Kevin without him knowing it was happening. Graig says he didn’t know. Graig says he (Kevin) got Naeha up for us. Do you think if he was working for the other side he would have done that? Bruno says I am fighting for you to stay 100%! Graig says I know. Graig says if you guys don’t get Johnny out next week he is going after Zach. Johnny’s proved he’s a competition beast. Bruno agrees.


Ash, Johnny, Zach, Willow and Brittnee are hanging out by the bathroom. Willow lays down on Zach’s arm and asks look how cute we are?! She kisses his arm. She says “We’re in love, we’re in love!” The talk turns to s*x and big brother blocks the feeds. 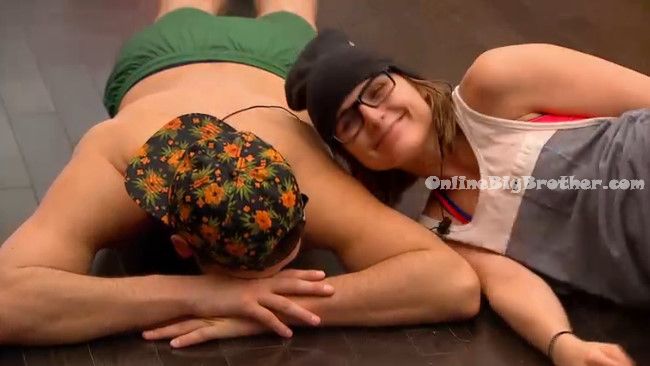 6pm Kevin and Pilar are in the havenot room. Kevin shows her the two tiles that set off the alarm. Pilar tells him he’s so smart. Kevin says it wasn’t him who figured it out. Kevin lays back down with her on the mattress pad and they start making out. Kevin asks her if she’s in an alliance with anyone? Pilar says do you remember Ashleigh .. the diaper thing she was talking about. Kevin says oh yeah the joke. Pilar says yeah. That’s the only thing I was in. Pilar asks Kevin if he’s in an alliance. Kevin jokes he’s in his 9th alliance now. She asks really? Kevin says no he’s not in any just with people he can trust. 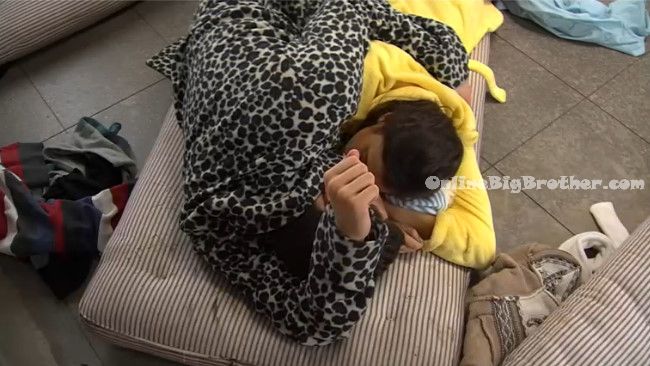 Week One there’s a lot of Alliance but we’ve tried to make sense of it all.. Read our alliance help guide (Keep in mind the feeds have been down for a good while so things will most likely have changed)

If only Willow knew that Zach fingered Ashleigh last night, and he probably got a hand job too.

Graig is really campaigning too hard. He was laughing when Sindy was campaigning like that, and now the shoe is on the other foot.

Zach should not be telling everyone that he is playing both sides of the house. That can easily work against him. Seems like he lost his touch since he got some action in the Have Not room.

Kevin is literally the Nash Grier of bbc3, he can say and do all the stupid shit he wants and people will forgive him because he’s cute.

*johnny has only won one veto*

graig:
“OMG!!! JOHNNY IS A COMPETITION BEAST!! WE NEED TO GET HIM OUT MAN”

Is Graig pretty much gone? I’m gonna miss him, he actually provides comic relief in the show with his stupidity.

AS of right now Graig is gone. There’s a lot of time left though and given how much stronger of a competitor Bobby is over Graig he might have a chance. Graig is essentially a non factor unless they have a baseball comp.

I’m rooting for JP he reminds me of Ian Terry and Zach. However, I can’t see why they would want to keep Bobby, other then the fact that the girls hate Graig and they want to be in good terms with them.

Just out of curiosity, who actually likes the showmance crap of BB? Thumbs up if you like, down if you don’t :) thanx

Not sure I like either of the couples in showmances this year. Neither are a good match and they both seem somewhat contrived. I actually think BB shut off the feeds when Zack, Johnny, Brit, Ash, etc. we’re talking about sex because Zach was talking about past encounters with girls and how they always had expectations of him after the deed, and how he has to accept that he has to deal with a before and after process with girls. I don’t think the convo was “good” for BB’s version of the Zacleigh showmance. I mean they let Graig and everyone else talk about him getting off beside Sindy and did not shut that down . . . .

another name
Reply to  SMH

lol. hey smh, I feel like saying, ‘hey come sit by me, and we can both look skeptically at productions captain canada marketing campaign.’ (I agree).

How did they discover the alarm tiles? I thought a screen capture of someone trying to lift up the tiles. Is production feeding them clues?

Happened last night the noticed two tiles were different than the rest.

Here’s how i look at it, either way if you keep Graig or Bobby the chop shop are gunning to get rid of all the girls first and Johnny. If you keep Graig then you have a much better chance in winning a competition…