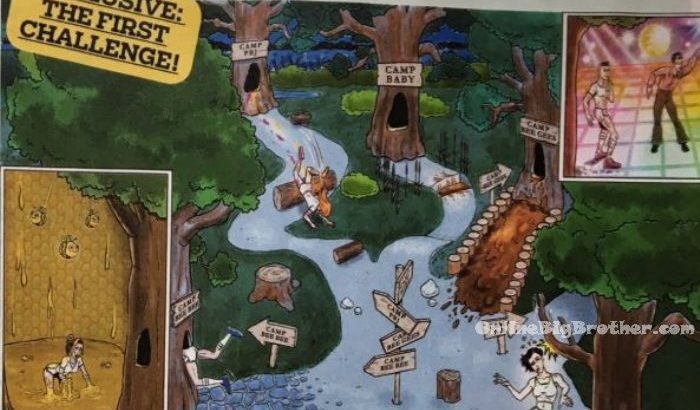 With the premiere episode of Big Brother 21 just one week way we’re all dying to start spying on the all new cast of house guests. The next best thing is getting an exclusive sneak peek at the first challenge of the season. In a recent TV Guide magazine we get an inside look at the first competition. A special thank you to twitter user: Bryan Wayne @mrhappybw for the photo of the article.

Additionally, in the article below it is also revealed that the seasons theme will be that of the great outdoors. 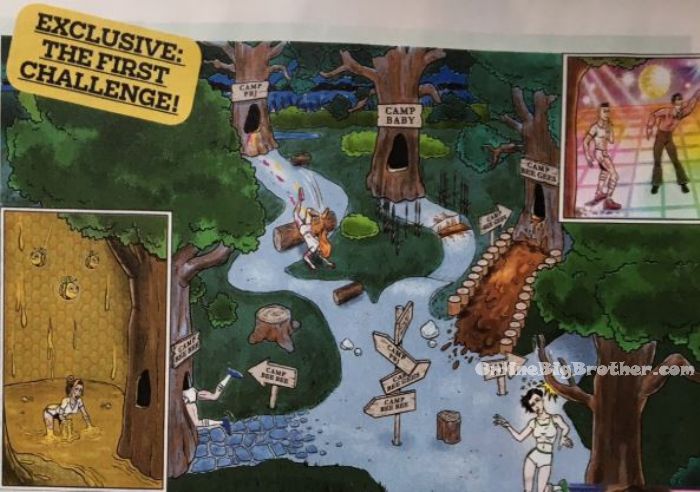 “CBS’s long-running reality competition Big Brother has always brought the strangers-forced-to-live-together-drama, but lets not overlook the fun part: the challenges. When Season 21 kicks off with a two night premiere, 16 house guests begin their three-month crusade for a $500,000 prize (and the notice of host Julie Chen Moonves, inset). But first – in a season that embraces the great outdoors – they have to get through the silly summer camp seen here in an exclusive artist’s rendering.

“This challenge has one of the things we love to do in Big Brother, which is put our house guests in complete darkness and play a game,” executive director Rich Meehan says. Lost in the woods with no light to guide them, each player must blindly fumble his or her way through the backyard to find the path leading back to the house, aka Camp BB. Along the way, they could unintentionally knock into obstacles or end up in a decoy room with a similar name, like Camp Bee Bee, where they’ll get stuck in a quagmire of honey, or Camp Bee Gees, where they’ll have to hustle through a disco diversion.
Big Brother’s challenge department, led by co-executive producer Heath Luman, spends up to eight weeks conceptualizing, planning and doing trial runs of each showdown, which variously, test physical strength, mental sharpness, memory and endurance. But “especially on opening night, when the stakes could be very high, we want to make sure it’s as fair as possible,” executive producer Allison Grodner says.
“Everyone can do well [on this one]. It’s not going to rely on a specific skill that maybe one person will have over another” Of course if you happen to have perfect night vision, you might have the advantage here. – Rich Sands

I actually get the hard copy of @TVGuideMagazine still and they have a small piece on #BB21. Says the season is great outdoors themed. First comp will be set in dark where they must find way through back yard through a Forrest to “camp B.B.” will be false camps they get stuck. pic.twitter.com/26toGbzUXw

Looking forward to this new season! I think the “great outdoors” could be an interesting theme. But I’m going to pass on any attempts to rank the houseguests before the season starts. In pre-season ranking last year, I thought Tyler would be easy carnage. The year before, I thought Christmas would be a star. ‘Nuff said.

OMFG I swear if that happens ..

Will Cliff have a chance?! The darkness might help level the other guys speed and athleticism and allow Cliff’s experience to shine…he just might make it past the first eviction!

Hey Simon and Dawg!! Can’t wait for next week! Any chance that Cliff Hogg is related to Whitney Hogg BBOTT?

I was thinking the same thing the other day.

Glad you’re back!! I didn’t even clue into that … That would be interesting!

He’s from my city and I think that Whitney is from the south, somewhere. I bet they are related. Maybe her uncle or something

I believe I read Tommy and Christie knew each other too. Something about the two of them in an Instagram/twitter picture from years ago. She dated someone he knew or something. I hope they aren’t doing some kind of secret pairs or connections type thing. I’m not sure how I’d like that. 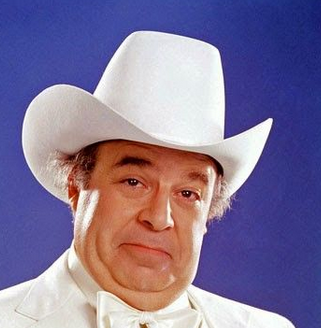 Rumours have Kemi winning the first Head of Household.

Poor Cliff…only hope is if someone else has annoyed Kemi. He’s a very easy target otherwise because a 20 year age difference is hard to overcome.

Not that I would ever want to subject myself to such torture, but I have always thought my only saving grace for being an HG would be my amazing southern cooking and obvious non-threat status (and obviously my ability to provide lots of mama love support). Let’s hope Cliff can find his HG’s can’t live without him….for whatever reason. #MosquitoCliffBB21

My sources say it’s Nick, but my sources have been wrong in the past. :-/

Do not bring back that gremlin Paul! Enough already.

I’ve been told to watch Entertainment Tonight for a first look at the BB21 house. I’ll be watching.

Sweet! CBS hasn’t shown anything on their press site so I’m guessing ET will have the first look.

Do you know what time?

There are rumours of an outdoor theme and a duos twist.

Who gets camp director