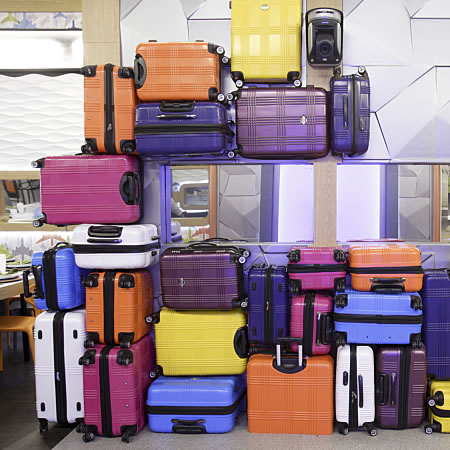 I wasn’t expecting these until Friday but here we go! Big Brother 18 House theme and picture reveal. The Theme is Summer Vacation.. Hurray ;) We got the Cast a couple days ago, the interviews revealed some interesting cast members, check them out here and here.

now all we’re waiting for is some clarity for the beginning twists and who the returning player are.

Features Include Exotically Themed Bedrooms and Living Areas, Plus a Completely Redesigned Backyard With a New Pool, Hot Tub and Gym Equipment

New Weekly Competition to Be Unveiled During the June 26 Episode

From the press release

“We are loving how the house theme plays into the twists and turns that the BIG BROTHER Houseguests will face this summer,” said Allison Grodner, Executive Producer, BIG BROTHER. “I don’t want to give too much away, but there are quite a few things in the house that are more than just decorations.”

“This season we’re creating the craziest summer vacation ever inside the BIG BROTHER house,” added Rich Meehan, Executive Producer. “It’s going to be 99 days of twists and turns, with a few secrets along the way. But we’re most looking forward to those moments that even surprise us…because it wouldn’t be BIG BROTHER without unexpected ‘showmances,’ meltdowns and blindsides.”

As with any great vacation, the Houseguests will start their summer of fun in an ultra-modern air terminal/living room where a “Departures” sign lists the exotic destinations featured throughout the house. The air travel theme continues in the kitchen, with an island built from the cowling of a 727 jet engine, and souvenir-themed plates, glasses and snow globes. In an African safari-themed room, Houseguests can lounge inside a “glamping tent,” then “travel” to the bustling Shibuya section of Tokyo with its pop-art graphic mural and neon signs, and to London with its cobblestone floor and Union Jack fabric in the bedrooms. A bright yellow and red phone booth serves as a passageway between the Tokyo and London rooms and has a working phone that connects callers to the Head of Household suite. The patterned textures and bright colors of the Caribbean-inspired bathroom brings the beach indoors for the Houseguests.

Upstairs, the HOH suite is themed Honolulu, Hawaii, with a laser-cut hibiscus room divider, tiki pilasters and a headboard built from a massive saltwater aquarium, with seven tropical fish, one for each of the seven seas. Also, this season’s chess set is custom built with 3D-printed scale replicas of famous landmarks in Chicago and New York City. 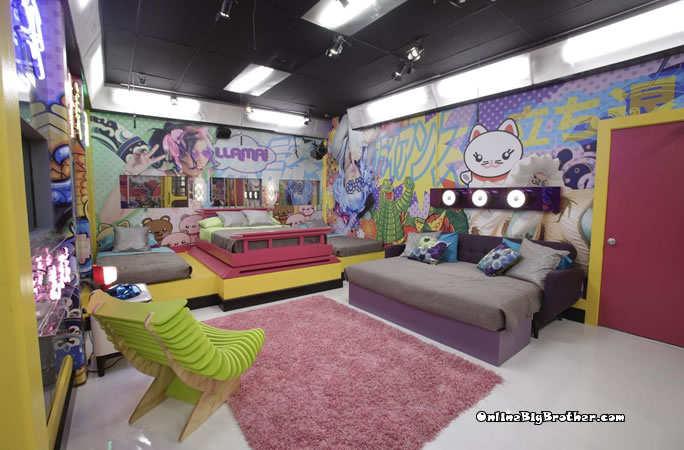 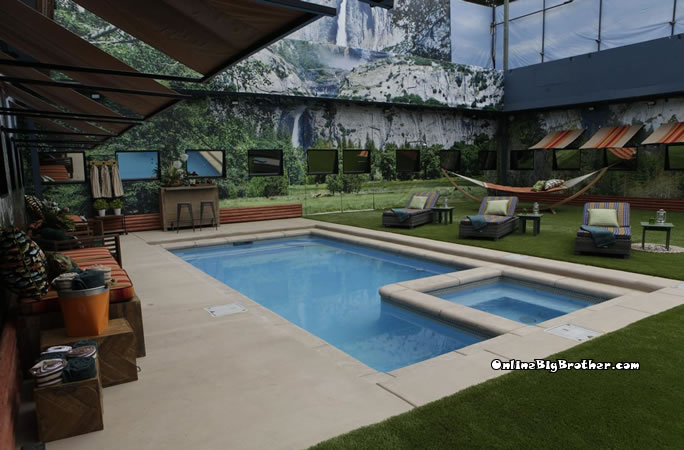 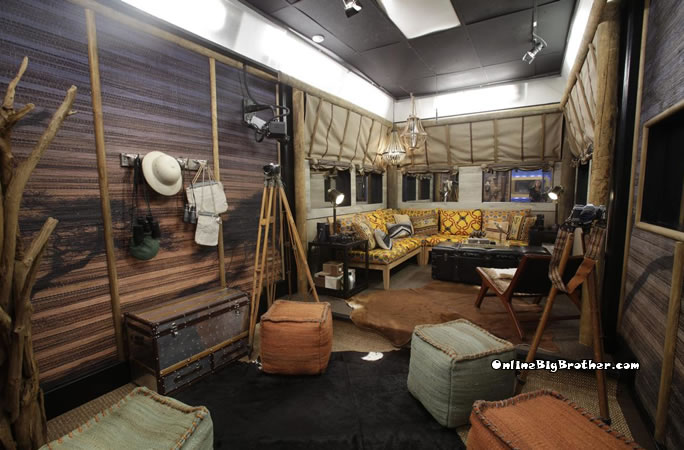 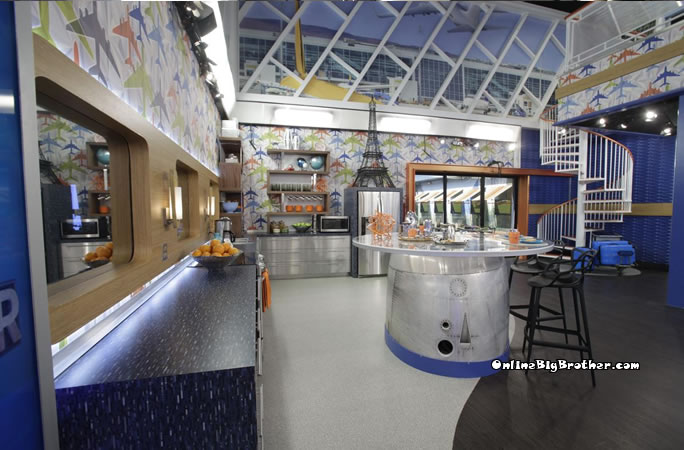 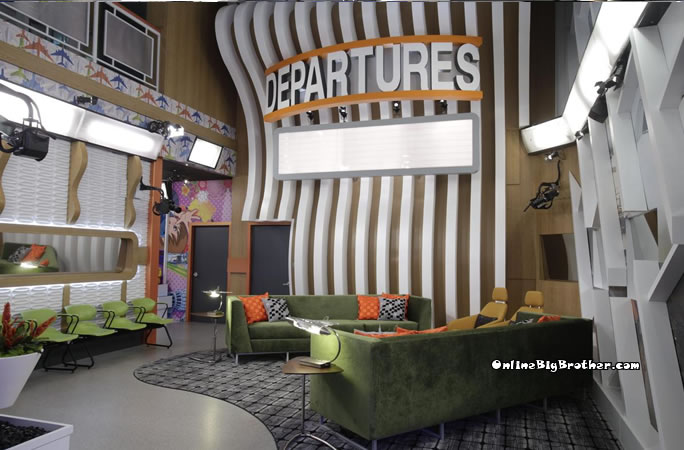 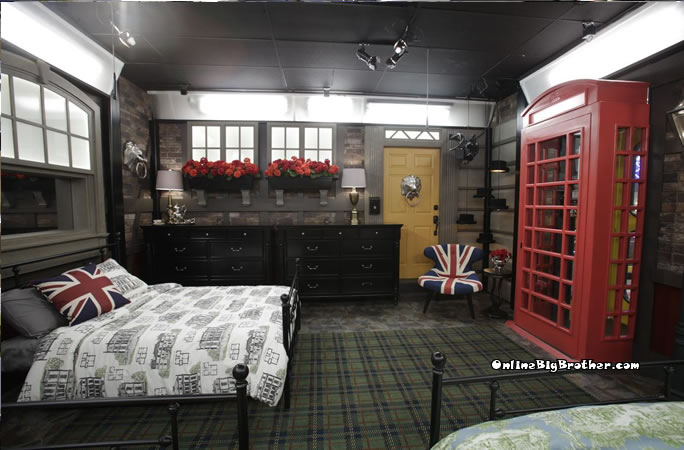 Grodner just confirmed there will be no battle of the block! YES!!!!!

That is good news. I love adding twists but Battle of the Block is one that just doesn’t work.

I like this theme a lot. And the new pool is nice!

I still don’t understand why they bill this as a “new house”. It’s the same house that underwent a facelift. Why don’t they change the floor plan? Move the staircase? Mix things up a bit?

Really likin all these theme rooms this season. Love the scenery look of the backyard too! Wondering if that Departure Sign info or those suitcases will play into the game in some way.

I wasn’t so sure about the house design after the “leaked” photos the other day, but seeing these, I do believe I dig this house. Love the living room and London themed room, especially the phone booth. I also want the wooden backyard furniture, please and thank you.

We all know there are going to be some former players coming back
Simon & Dawg and everyone else who do you want to come back ?
I would like to see James bb17, Nick bb15, Kaitlin,bb15,Jackie bb17
Who I don’t want to see Audrey bb17, Vanessa bb17, Judd bb15,
And of course Frankie Grande!!!!!

Umm that’s a tough question.. I wouldn’t mind seeing some crazy players come back in. Like an Audrey, an Amanda or a Devin, maybe even Caleb. It would never happen but Willie from season 14 gave us still to this day the craziest week 1 on the feeds. Enzo from Season 12 was cool, JAmes bb17 was cool and Kaitlin bb15 was awesome. Don’t think JAckie would be on my list. And Frankie coming back is one of the worst outcomes.

Love the way the house looks.

Liking the new house design! Now anxiously awaiting to see who the mystery 4 will be. Love to see Amanda back… Need a good bitch and she sure fits that bill. So many of the great players from years back have moved on with their lives so I’m sure it’s going to be 4 from the not to distant years.