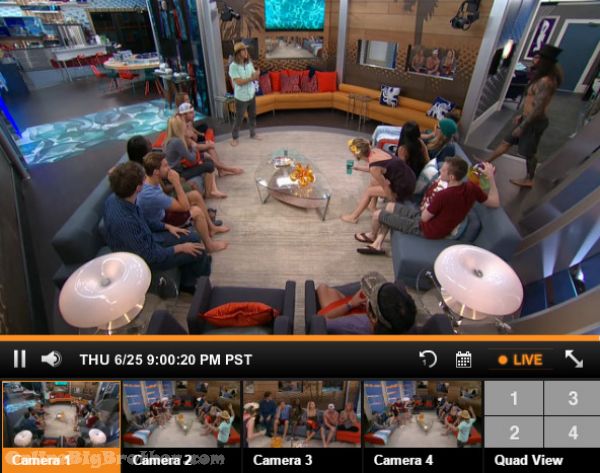 houseguests collected in the living room. They’ve been told the live feeds are now open to the public. They start doing shoutouts to family and friends. 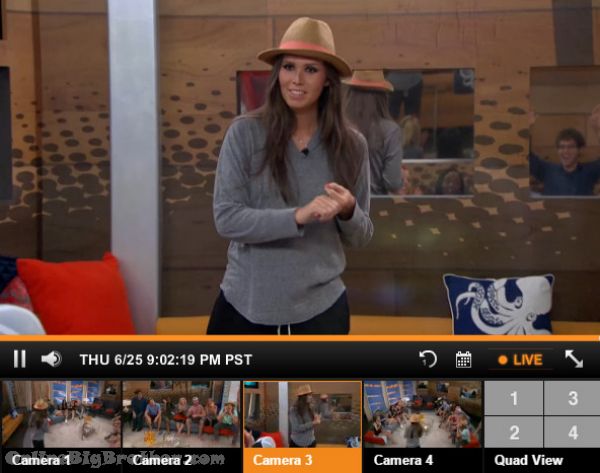 Audrey is the first one up. 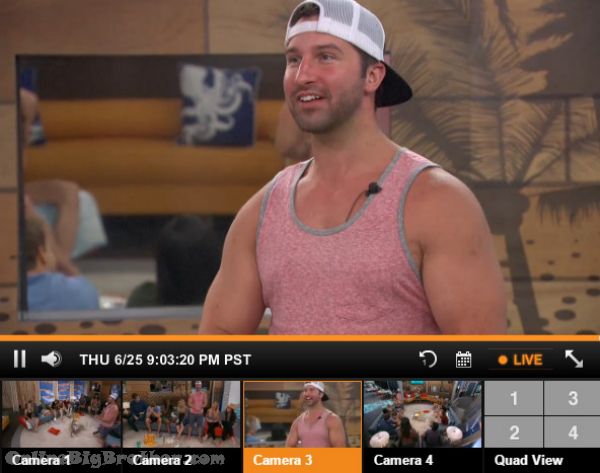 Jeff thanks his mom and dad along with Eric his twin Brother. 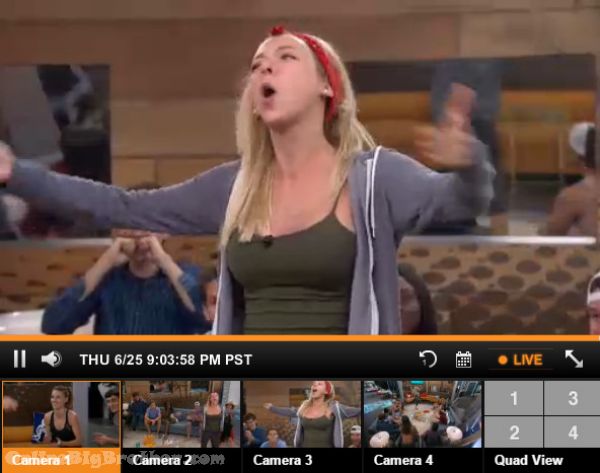 Liz thanks her mom and pop says the party doesn’t stop in Miami. 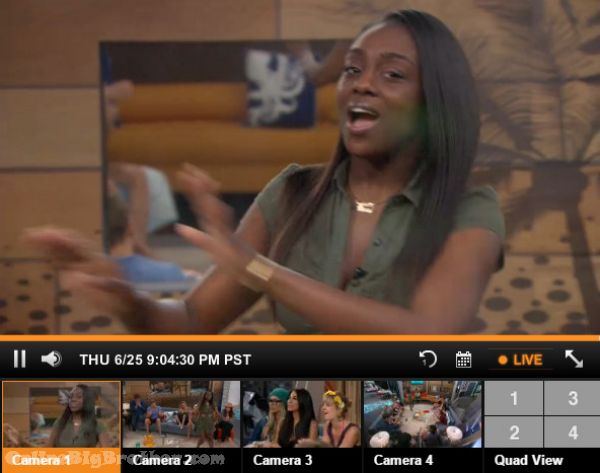 Davone thanks her family 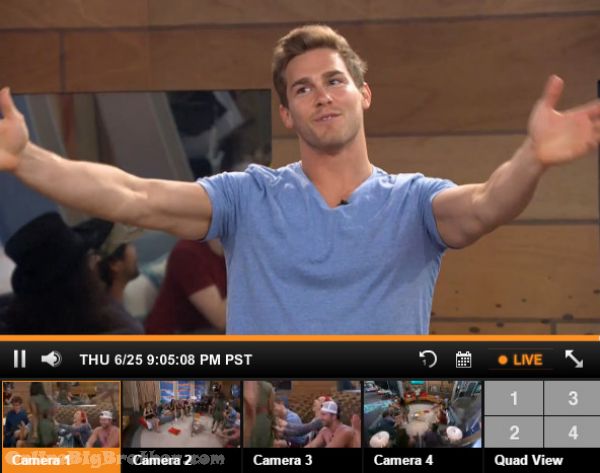 Clay thanks his mom 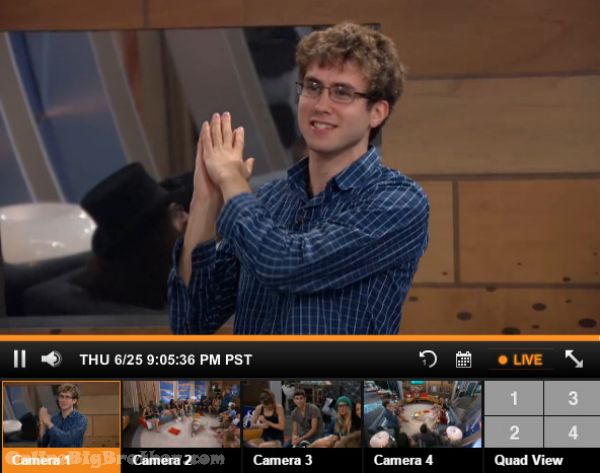 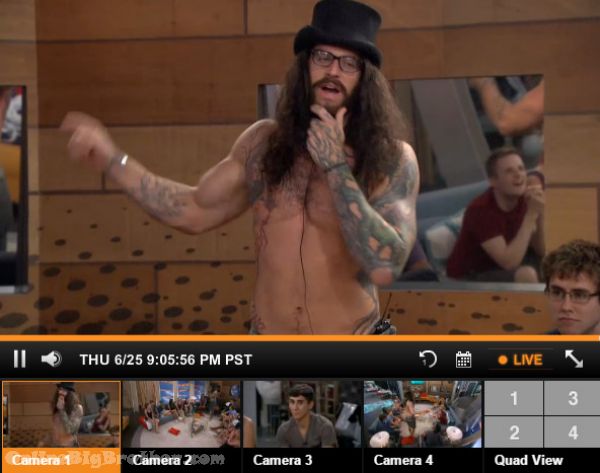 Austin says his breakfast is made with real fruit thanks a bunch of people including his Sisters and parents. 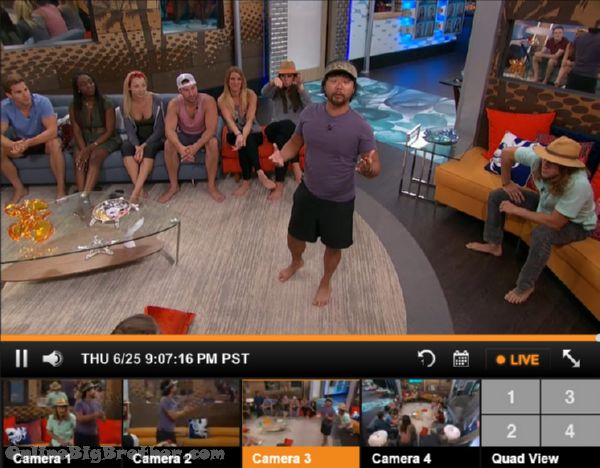 James gives a shoutout to his beautiful daughter Baleigh 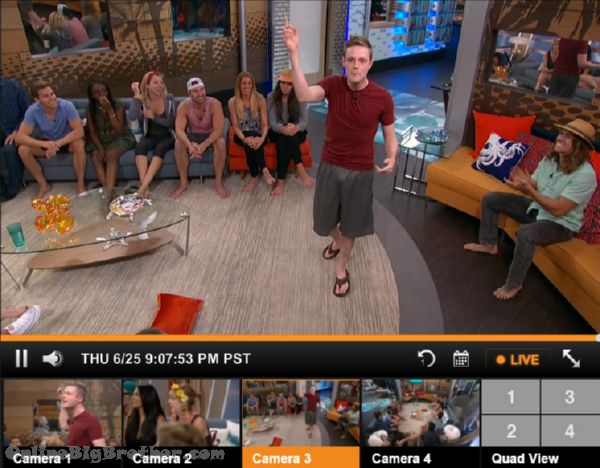 Johnny mac thanks his mom, dad and Brother. gives a shoutout to the people in the office 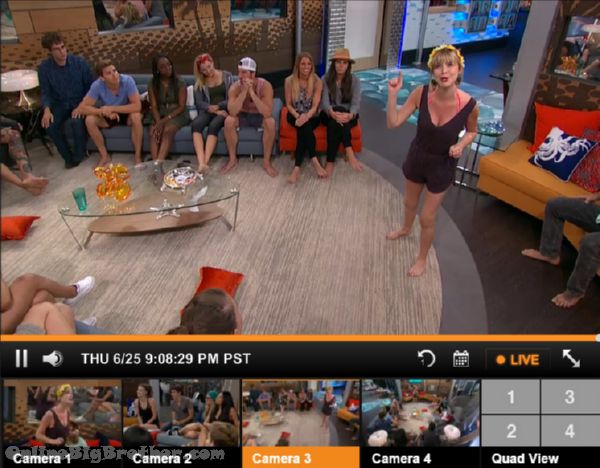 Meg thanks mom and dad and “JONNY T THATS RIGHT” 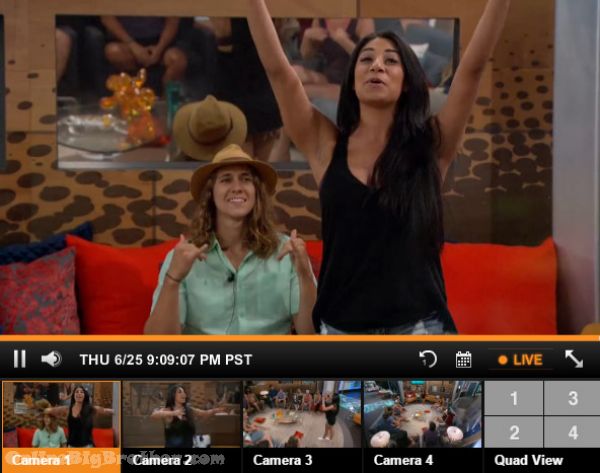 Jackie thanks Mom, Dad and Brother “So proud to be here” 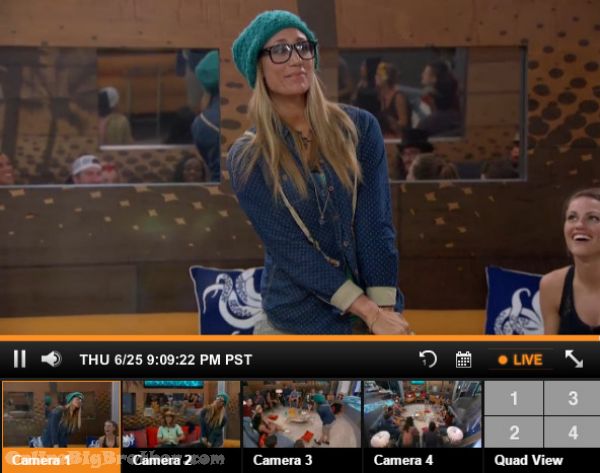 Vanessa Thanks Mel “I miss you so much, all my florida peeps all my vegas peeps whats up” 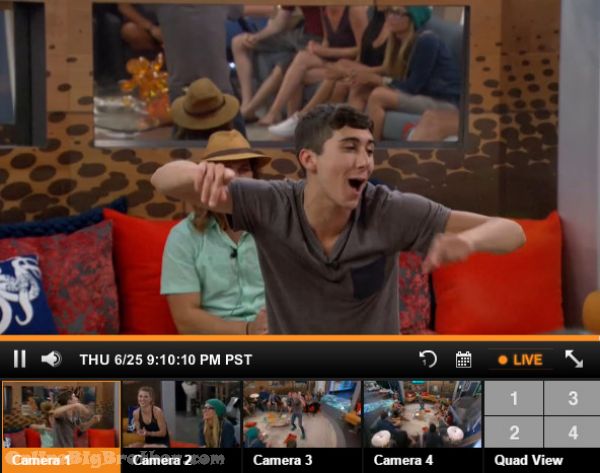 Jason “All my bad bitches and hookers.. you know what it is hoe” 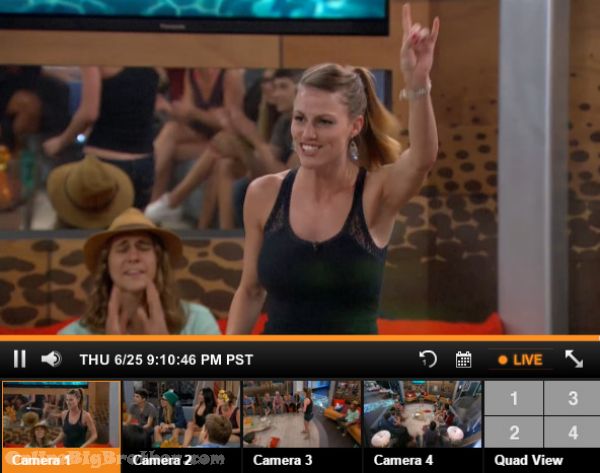 Becky “So excited to be here.. Miss you girtls LOVE SHACK” 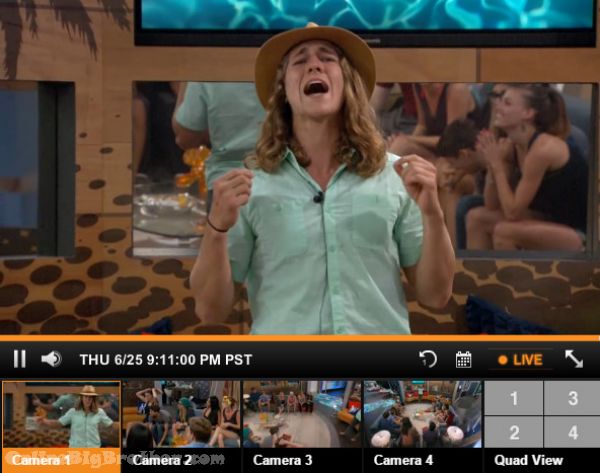 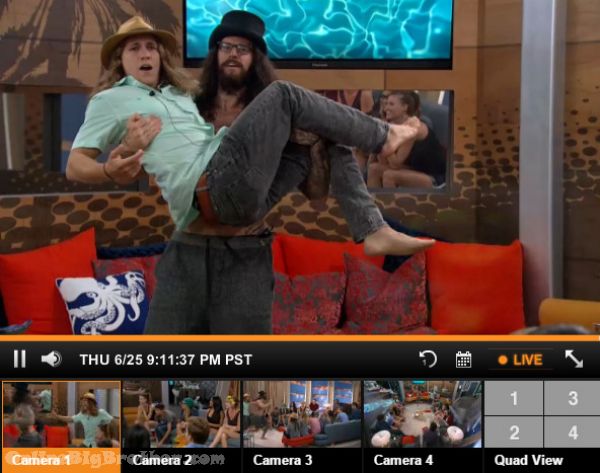 9:12pm Looks like Jace and Austin have become friends 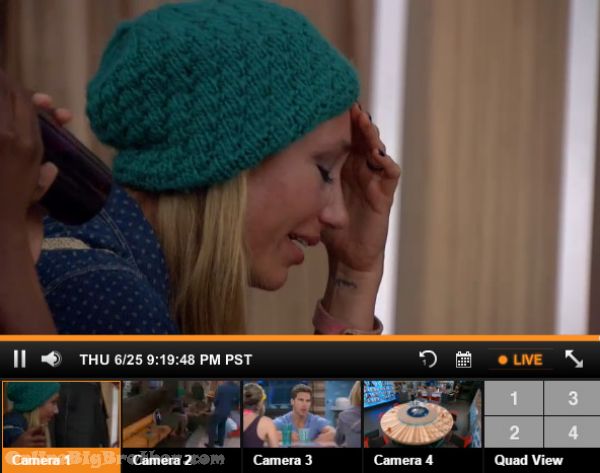 9:20pm Vanessa is missing her girlfriend.
Vanessa “It’s been 2 and a half weeks it’s been so long”
Steve and Jackie are comforting her.
Steve – Did I tell you about the research project I’m working on.. Have I shown you my math skills yet”
(They are laughing about this)

Steve and Jackie are nominated. 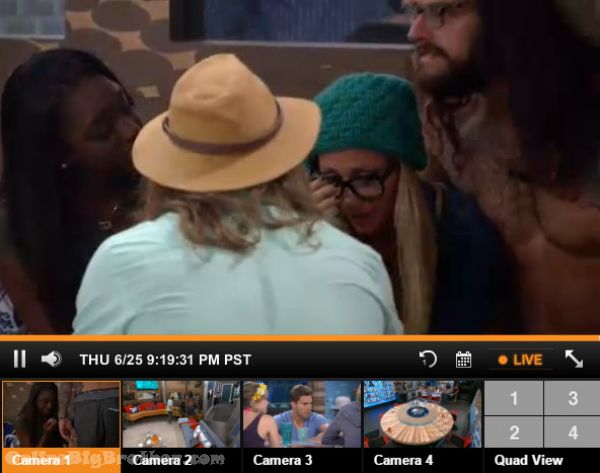 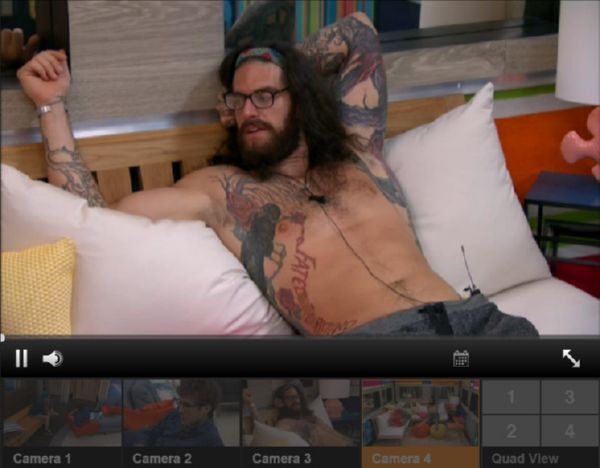 They give out a bunch of shoutouts. JAce says he won’t give Dan gheeshling a shoutout.

Austin – We gotta make a final three with honeycut
Jace – I like Honey Cut
Asuting Liz is my main final three.. she is the clebrity chick
JAce – she’s hot this is hot
Austin – I got a girlfriend i’m in love with.. LIz is our Janelle.. Shelli’s gotta go

James is the HOH Steve and Jackie are nominated.

I really hope Steve doesn’t go first! He was so adorable comforting Vanessa!!

I know – I LUV Steve!! He is smart & witty & I really hope he sticks around for awhile! I know it’s early but right now I think my favs are Steve & DaVonne. I really like her too & she is a single mom – so gotta root for her. However those poker people reading skills may need some work since she immediately dismissed John as being a dentist! LOL! Though I can’t really blame her for misreading him – he Does seem a little twitchy/nervous to be a dentist! LOL! And I guess Austin isn’t gay afterall since he said he had a girlfriend that he loved. I like him either way.

I would like Jace and Meg gone ASAP thank you.

Agree. His line about working on a musical project that includes the alphabet, trying to get U and I together was cute.

Yep – he’s trying way too hard! Hate to judge someone too soon but he got on my nerves almost immediately.

Yup. He tries too hard.

What happens when you play to hard to fast……….. ask Cindy with an S! Might not be 1st but not long for the house if he continues.

I love Sindy tho! She made a big move blindsiding her showmance which gave us good TV, I love good TV!!!

There are now 4 people in the house that have a twin on the outside? WTH?

Is there a chat room on the feeds for onlinebigbrother peeps?

I’ve got so much catching up to do.

Not surprised Steve was nominated first. He stands out the most.

So I’m guessing Jace/Austin (Jactin) are a pair.

Clay is close to Audrey/Da’Vonne/Shelli, and Meg could be a number for that group.

Vanessa seems like a loner for now and on the quiet side. I wonder if she’ll be a true Floater this season like Jun.

Wow…so Clay is in the girls alliance???…

Yep lol. He’s been glued to the girls, especially Audrey. I wonder where this will lead to…

Clay may be attempting to snatch some of that forbidden fruit.

Austin and Jace is bad news for Austin. His size makes him a target anyway but Jace is baggage he does not need.

as someone who don’t live in the US with no access to the feeds i really appreciate this! im gonna have to rely on the video you upload! thanks so much

Just get a VPN. Many are super cheap and should work for you.

So apparently people are annoyed by jace..? I personally find Jason extremely annoying! But I can see Jace

to see Jason out of the house next week. gone, never to return to our TV’s again. he is already annoying the heck out of me, and we are only 2 episodes in. scary.

Ariana Grande stinks!
Reply to  I would love

No, he’s obnoxious and annoying. I’m gay and I don’t like him either. If he were straight, he’d still be annoying.

Would love for Jason to be instantly replaced by Job from Banshee! I’d buy and sit by the feeds 24/7 for that.

Ok so Steve and Jackie were nominated by James so when does Jason nominated his two?

Simon
Reply to  production rigged it

He has already the BOB has been played. I’m not sure yet who went up.

Everyone seems to be behind backdooring Jace right now, he is majorly rubbing off wrong on the house. Austin needs to distance himself while he can.

AND I admire Audrey’s courage, You go girl!

Jesus Christ. Vanessa is having a mental breakdown on day 1.

They’ve already been in the house for a week or so.

She’s the poker player right? I think she could be bluffing

Geez! You don’t have to use God’s name as a curse word or to express disgust.
You could have use any other name or curse word.. but you didn’t.
It’s called blasphemy. And it’s a serious offense.
Pls be respectful

Jace is trying so hard to be like Hayden from last season, but he’s wayyy too over the top. Hayden knew when to turn it off, Jace doesn’t.

Glad I’m not the only one Jace is rubbing the wrong way..I want Hayden back

Bummed Jackie is nominated but not surprised obvs

Let’s get this twin twist going!! I want the twins to be Johnny Mac and his brother

Vanessa congrats your now the most annoying house guest ever! Snob sniffeling and self evict!

Not sure who I like/dislike yet..just want to thank Simon and Dawg in advance for all the hard work you’ll put into our obession this season. Cheers!

jase is so annoying! I know it’s early but, thus far I am not impressed with this cast at all from what I have seen on the feeds.

If steve might be trouble depends how pov because a lot of people might compare him to ian like davonne and clay probably others. And does anyone think jeff probst comes with a twist like a return contestant or that two votes like in survivor to one person. So there 17 houseguests wow. Jeff is playing a jeff game from bb11

Vanessa is either a really good actor, or going batshit week 1. I hope it’s the former, because if not I’d be so let down. I was thinking her and Da’Vonne would team up in secret.

Okay so I’m guessing Clay, Meg, and Audrey are a thing? And are they already lounging in the HOH room? This was like the Diaper Alliance on BBCan 3. Will they play too hard to fast?

There are a lot of strong personalities this season. I could see all the big threats take each other out and people like John make it to the end. But we shall see. Sunday can’t come soon enough!

austin and jase are easily my least favorite so far! I really don’t want Steve to go but I’m not surprised he was nominated he is an easy target bc he stands out to much. I hope he can pull himself off the block!

Thanks Simon and Dawg for all the work you guys do! I hope we have a good season!

What is a “lurker dude sketch master flex”?

They are playing too fast too quick