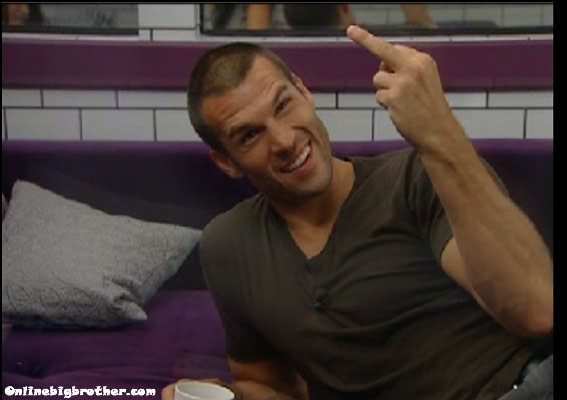 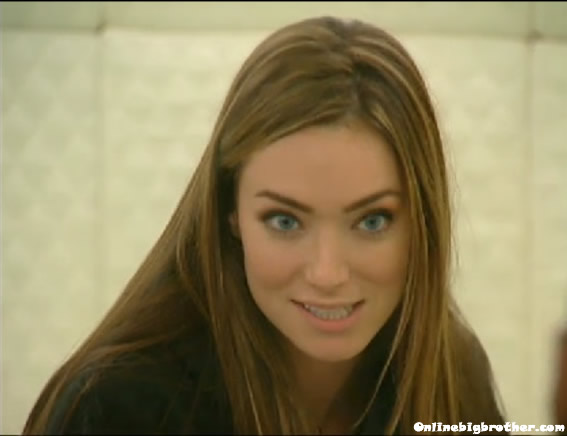 12:20am Have Nots Dom, Keith and Lawon talking about Dani acting the about dick being missing.. They start talking about it being them vs the returning houseguests. They all seem convinced that dick being gone is a twist

Adam, cassi and Shelly joins them they they are talking about how glad they are Porsche is going home. They start wondering what they should do if they win VETO. Dom thinks it’s a partner comp and if Porsche/Keith win they both get taken off the block. Keith mentions that maybe he should through the comp so they can oust POrsche. They all agree that they are not suspicious of each other. Dom doing a lot of theorizing he thinks if Porsche goes home nobody will be mad.

Keith: “Why isn’t anyone worried about Kalia she;’s flipped”
Adam:”I just think she’s a stupid bitch and doesn’t know how to play the game”
Adam explain to him that Kalia isn’t going to flip because she at the bottom of the totem if she does.
Adam says he’s worried about DOM he’s getting really close to Jeff and he’s being very cold to Adam. Keith agrees.
Adam: “For someone who says he doesn’t know the game he’s doing a lot of talking”
Keith: “He’s so adamant that I throw the comp”
Adam wants Kieth to keep that Private but he’s not trusting dom right now. Adam says he’s not talking much game with the returning houseguests because he wants t think he’s weak. He really thinks KAlia is stupid and they don’t need to worry about her. He’s most worried about Dom flipping.
Shelly and Cassi join them Shelly swears to them Kalia is not flipping. Keith tells them he’s worried that Dom want him to throw the comp it doesn’t sound right to him. Adam agrees tells him to play his heart out in the comp if he feels that there’s something up. Keith thinks that they (the mystery 6) might want to keep Porsche and get her vote for the following week thereby eliminating the numbers advantage the newcomers have. Keith: “Dom make me sound like i’m being overly paranoid but I’m worried I’m the target” Cassi chimes in that she is positive Kalia is with them. Adam reiterates how if anyone flips they are on the bottom of the other teams totem pole. Adam: “You’re number 7 if you flip”

12:22am fortune room Rachel and Dani talking about taking out the new players… Rachel wishes they could trust Cassi but she’s sure they can’t trust her. Dani says it’s not fair to the newcomers that they are playing because ‘It’s obvious we are better then them” Rachel agrees.

Dani says kalia is really getting on her nerves, Rachel agrees… Rachel thinks Lawon is a floater Dani thinks Lawon isn’t going to do anything in the game they both doubt he will win a comp Rachel “Even if he does win something he won’t have the balls to do anything big” Dani can’t stand Adam she thinks he says the stupidest thing. Rachel “I like Kalia, Adam and Porches but I just don’t think they fit in”. They are both glad to have the 6 returning houseguests. Dani “OMG if you weren’t in here i don’t know what I would do”. Rachel says she glad Dani is in the house to. dani whispers to Rachel tells her that they need to win next HOH other wise they won’t have the numbers.

They both love Jeff and Jordan.. and are sooo glad they are in the hosue with them. Dani “I always liked Brendon on the show he’s so goofy”. Dani admits to not like Jordan and Jeff during BB11. Rachel asks if she liked her last season. Dani didn’t like rachel until the end of the season but knew she would like her in real life.

Brendon joins them says Porsche is really getting on his nerves. rachel tells him to calm down about it and just let her get on everyone Nerves. Dani says the new players all got weird when the feeds were turned on expect for cassi who isn’t sure what show she is on.

Dani really doesn’t like Adam she’s thinking about telling him if he wins VETO and uses it then they will target him next. Rachel isn’t sure thats a good idea right yet. Brendon brings up how star struck adam is about Dick being on the show. Dani jokes that Adam lives in fake big BRother 8 house. Rachel 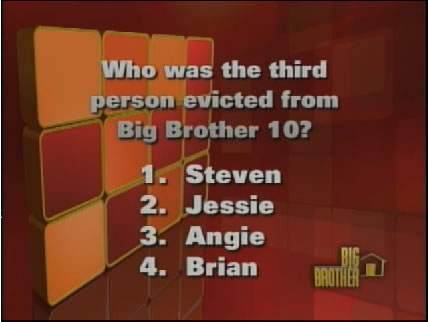 3:36am Trivia Thank god dawg is back… I’m starting to think Dick is dead

3:50am Trvia OK something is up

4:03am Trivia Dick Dead? POV getting played? CBS being assholes?

dani and rachel have this mean girl thing going. trash talking the newbies… i haven’t figured out who im supporting yet, but im really interested in finding out what happened to dick. also: loving bblite

There both mean girls!

I’m sooo happy for a new season. I lived on this website last summer. Though this year I am going to comment more. I am a j&j liver but hope the newbies knock some veterans out.

Ugh can’t wait to find out what happened with dick

ohh man, i wonder if she’ll be the fan favorite this year

not all comments are positive, trust me

i spend a lot of time on twitter, enjoying the twitter wars of celebs and getting news updates. i hope u didn’t turn twitter off because Rachel is trending. LOL.. They hate her, especially her laugh.

the newbies are soooo paranoid about everything, I feel like they’re gonna end up destroying themselves while the vets just sit back and watch

Everytime Cassi was on the screen (live feeds) I lost my train of thought. She’s stunning and a total tomboy, she’s awesome. Def a Cassi Fan

Dicks out of the game specific reason not known

something happened outside the house “Personal Things” all Dani knows it’s not immediate family.

OMG Simon is that true. I love Dick and wanted him to win it all again. I guess I will have to go for Dani or Jeff.

AWWWWWWWWWWWWWWWW C’MON I was looking forward to Rachel’s torment. Rest of the show is not going to be good without him. I hope this is just part of the game. I wouldn’t be able to stand Brenchel coasting to the win.

I may be giving too much credit to Dick here….but I wonder if that was part of his plan to help out his daughter….now she’s guaranteed to be in the top 10

Boring. why do they regurgitate the same players. 250 million americans and they bring back 6 repeats. I need more originality. tiring. WILL NOT WATCH

Oh no, QAZ, drink! Dave, I know, you would think they would pick new people but they are going for the sure ratings from past draws. However, sometimes people do get tried of the some old.

No one cares if u do!

What the hell happened to penis??….I mean Dick?

This old vs new will give us a fun summer compared to last sumner. Lots of strategic scheming got to love it

BB should do something to make the new guys have a fair chance the vets know the games, and the things that are coming not fair.