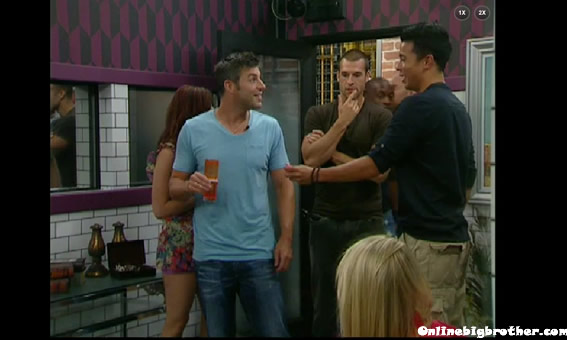 Here we go… lounge brief talk about playing a prank on Dick. Dani Joins them, they start asking her if DIck is another twist she says no. They start suggesting hiding his key, Dani joins in reminds them she hasn’t talk to her father in years. They Dani if Dick is doing a live blog in the DR she doesn’t think so they all agree that wouldn’t be fair. Adam charges in asks tells them he found a piece of paper in the living room it was under a nominations chair cushion. Most people are giving Adam a hard time saying he’s making the paper up. Adam swear to them that he’s telling the truth. Brendon makes Adam promise him he’s not lying about the paper and if he’s lying he has to give up bacon and cigarettes for a week. Porsche says she feels like she’s playing the game “clue” with all the secret message laying around. Jordan brings up that the POV is tomorrow. 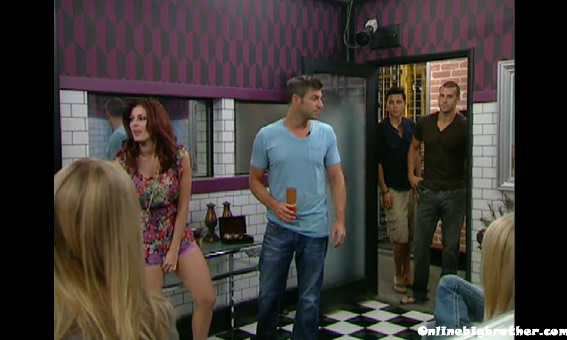 Jeff and Jordan talking about if Dick is allowed to do his web “things” it wouldn’t be fair. Jordan is worried that something happened to Dick that’s why he’s in the DR for so long They Giggle about planting the piece of paper under the cushion with Brendon. Brendon walks in brings up that DICKS been gone for over 2 hours. They laugh at the planting the clue. 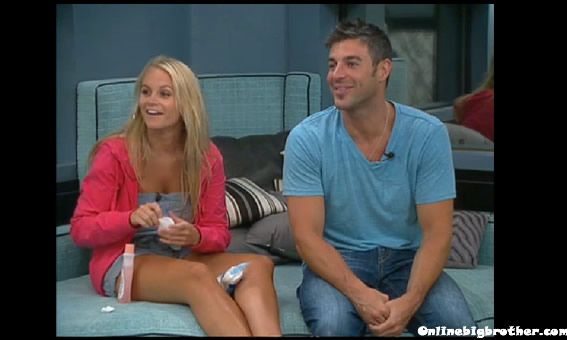 10:20pm Rachel starts to rally the houseguests to play her game Porsch from the kitchen asks her something about a red stain Rachel says it’s wine porasche says she though it was menstrual blood, Rachel: “Thats so gross”. The houseguests meet up in the HOH room They are playing the same game Rachel made them all play last season (Find the differences). One group stays in the HOH the other group hides stuff in the living room. THe HOH group then turns on the HOH spy cam and tries to find out what the other group moved. 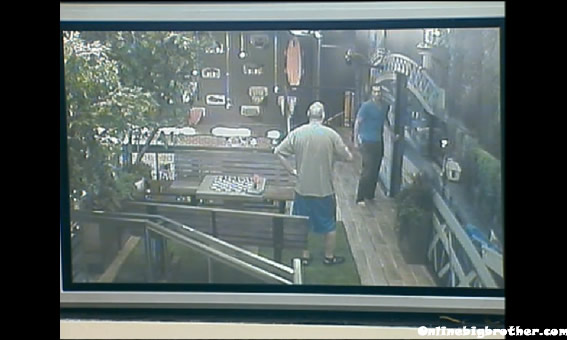 10:40pm HOH Random talk hearing a lot about BACON BACON BACON BACON.. Their all in the HOH talking about how bored they are Rachel suggests they have another fashion show. … They can’t decide to do.. Dani brings up how exciting it was during her season. Rachel Suggests heads up 7-up… Jeff wants to do something that allows them to cool off “Lets use our minds”, Adam “lets all take showers” everyone laughs POrsche doesn’t want to. 10:51 they all leave the HOH cause it’s so “BLANK” hot. There’s grumblings about not being allowed to play charades. 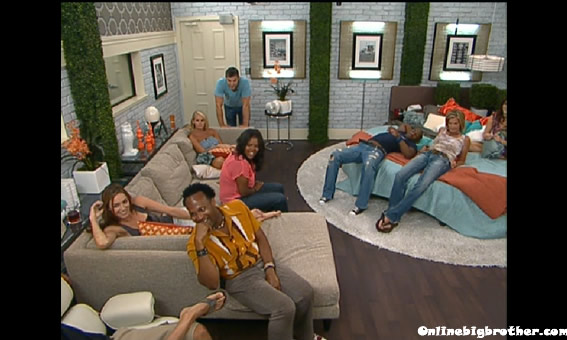 So excited for the start of a new season…Hopefully it’ll be way more entertaining than the fiasco that was last year! lol And even though I have to suffer the through the torment that is Boy George’s laugh for an indeterminate amount of time, things are looking promising so far! And so excited you guys are back!

Let’s hope Allison Grodner hasn’t turned into a vampire. Actually, if it’s Rachel’s blood, then yes. Let’s hope she has.

Did I miss something, Simon? What are the “web things” that Dick might be doing that the HG’s are referring to? Does he run a blog or something?

he’s been doing stuff at rtvzone and was going to host recap shows this season obviously before he ended up on the show.

Ok.. So Dick has to be gone right!? Its been well over 3 hours and no sign of him.

J, very strange isn’t it. Something is going on with Dick.

Good to see you all back. Sickened by another season with Rach/Brendon as well as Dick and Danielle. How many people live in this country and they can’t find new people? I think they’re going for immediate drama. But the truth is.. so far other than Dick disappearing.. it’s boring. : ) *waves @ Simon and Dawg* !!!

Love the dynamic duos this season! Although I do not like some of them (Rachel/Brendan), they add a lot to the season as far as entertainment goes. I wonder if Dick missing has something to do with a new twist or if he is in some sort of trouble? Would hate to see him go so early this season!

Simon, Dog, thanks for the great updates already… I should be sleeping right now but I am reading your blogs. One request: PLEASE consider changing out that first picture on the top right. I can see how the psycho red-heads boobs would draw a certain amount of traffic but really, it is too much! Thanks!!!

Look at those screenshots of Brendon, totally jealous of Jeff.

why aren’t they allowed to play charades??

I don’t know about anyone else, but bringing back some of these same ole people is ruining the whole concept of Big Brother. They won so leave them to there fourtunes.
Again you have your perfect people, your gay person, minority persons, the slightly older than the rest person, Theres never any real people. Old, fat, crippled, and ugly your all American —-American.
Looks like Julie is pregnant again…..?