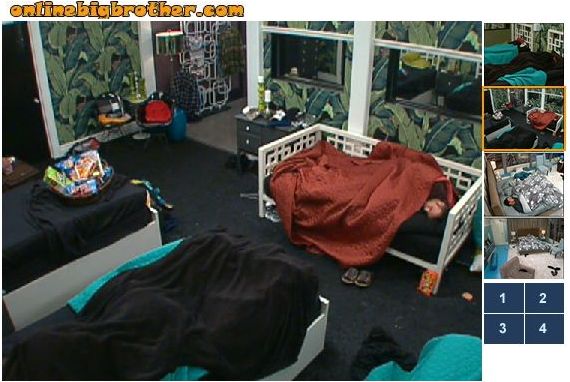 $5 off Discount – LIMITED Time OFFER! ONLY $9.99!
PLUS try it FREE for 3 Days!
9am Big Brother switches the live feeds to the “we will be right back” screen. At 9:20am the feeds come back. All the house guests are still in bed with the covers pulled up over their heads. At 9:45am Britney gets up to go to the bathroom to take a shower. Britney is getting ready in the bathroom with her towel wrapped around her. She heads into the bedroom and grabs her clothes and then goes back to the bathroom. Big Brother calls her to the diary room. Britney says very funny …I am naked under the towel …I am not going …call somebody else. Britney then goes into the washroom to get dressed. Hayden in to the bathroom and says YO! Britney says hey! Hayden says I GOTTA PEE! Britney comes out and starts putting on her makeup. Hayden goes into the washroom then come out and asks what time it normally happens. Britney says 11am. Hayden leaves the bathroom.  Big Brother then calls Lane to the diary room and Britney says thank you.. 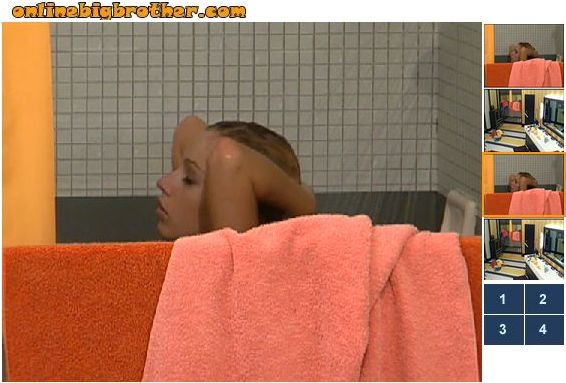 10:30am Big Brother calls Britney to the diary room again… this time she doesn’t say or do anything she just keeps drying and straightening her hair.  When she’s done she leave the bathroom and heads into the diary room. Ragan is now in the shower. Enzo is dressed and trimming his side burns in the bathroom mirror. Enzo farts and smiles as he looks over at Ragan in the shower.  Ragan asks did you fart?  Enzo says yeah …its okay! 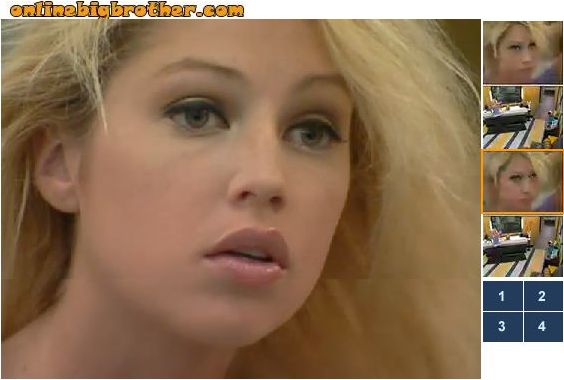 10:45am Enzo comes into the jumanji room where Hayden is laying in bed. Enzo says that he is drinking tea out of a BLANK bowl. Enzo asks what time the POV ceremony is going to be? Hayden says around 11 oclock …so in like half an hour. Enoz keeps saying don’t be scared. Hayden gets up and says that he’s going to go get ready and shower. Enzo heads back into the kitchen to make his breakfast. Enzo heads out to the backyard and stops at the kitchen table and says “Spaceship, I will finish you today!” Britney laughs. They both head outside to sit on the backyard couch to eat their cereal. Big Brother then calls Enzo into the diary room. A few minutes later Big Brother tells the house guests that they are on a out door lock down. 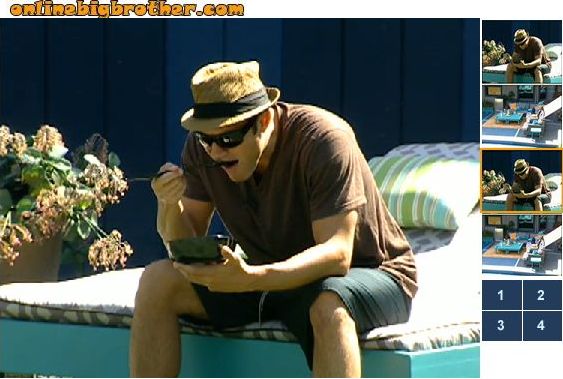 10:50am – 11am Ragan comes out into the backyard and asks him if his speech is going to call Enzo and Hayden out for making out all night. Ragan says no …but that he has something else planned.. Something similar …something more controversial… Ragan says that he is going to one up Andrews speech… just you wait. Only Ragan and Britney are out in the backyard. Britney says we are on a lock down …where are Hayden and Lane …did they get murdered or something. Ragan says well Hayden was in the shower. Lane comes out into the backyard. Lane asks Britney if she wants to bite the dead skin off his foot. Britney says no I dont think you’re famous enough… I live in this house… for all I know they could be blacking out your face. Lane says so if when we get out and I am famous …will you bite the dead skin off my feet then? Britney says no …maybe Tucker (Lane’s dog) will though… Big Brother cuts the feeds to the “we will be right back” screen..

Controversial???..with the dead air we’ve seen from this lot, how the hell is anything truthful going to be controversial?….Ragan looks like he’s trying to set himself up for some interview/talkshow cash by exaggerating the truth…meh, can’t blame him i guess.

i dont really see her lazy eye ? they look straight to me in that pic

I AGREE with you. Ever since I heard that Britney has a lazy eye, I have looked for it! Say what you must about BRITNEY but you can’t take away from the fact that she is a BEAUTIFUL YOUNG LADY! (on the outside) NOW KRISTEN had a LAZY EYE, BIG TIME. Her right eye! But I just don’t see it with Britney and NEVER have. I watch BBAD and not ONCE have I seen it. I think you all are confused her with KRISTEN!!!

No, she does have a slight lazy eye. It’s not really noticeable, but she does have it. Doesnt take away from the fact that she’s a pretty girl though.

I see it and when she’s tired it’s more noticeable as it is with people who have lazy eye. I knew someone who was born with one eye completely crossed and after treatment you would never know today. Brit is pretty on the outside, but she’s young and hopefully someday she’ll gain enough insight so that her inside will match her outside.

Ragan is going to throw Brigade under the bus. Fianally. Hopefully… Give us some drama dramaqueen.

When, how and why

yeah maybe…but the only person it would get on his side would be britney, which really wouldn’t do anything

“very funny …I am naked under the towel”

Why else would they call you into the DR you venomous bitch!?!?!

lol the camera guy was all over her dancing yesterday XD

It’s a damn shame that this little girl ran her mouth so much that a large amount of viewers can’t stand her, and we don’t even know her personality. Her parents should be very embarrassed.

I mean… We don’t even know her personally.. typo.

Dont you get it? People would hate on anyone in this house. It’s human nature for some reason. Dont think that if you were in that house it would be any different. Seriously. It boggles my mind that everyone is holier than thou, like you’re sooo perfect eh?

Why isnt Ragans picture with an alter ego? Couldnt find a picture of a little weasel? A whiney bitch?

because if you do anything like that to a homo you are labeled a homophobe.

Because he is worthless, why bother giving him one.

So Ragan is going to drop a bomb on the Charde….I think it’s a little to late for that.
Now he has no way of getting any votes to stay( not like he any to begin with)
I BET Big Mouth Brit will tell everyone, u know she loves brownie points.
I guess it’s a update worth waiting for.

Why in the hell would he put Hayden up? He should have put Brittany up and then there might have been a little bit of backstabbing, not know which one would go home. Now it is a given that Ragan is gone, no way Hayden is going. totally predictable.

live feeds came back for a minute and enzma asks hairdo how does it feel to be on the block. Its official brit is on her way to finaleee

Production should have BB13 as allstars because this season has been the worst.

I knew that was going to happen bye bye Ragan

What is the BIG deal RAGAN is the one going home and this way if the ‘Brigadë’ is outted then Lane can say sure we an alliance, if that were true then why would I put up HAYDEN? I think that it was a smart move!!!

lol did she sleep with him last night to not get nominated?

Maybe she did bite the skin off of his toe! Even though Hayden will never get voted off, it could have stirred some interesting fallout from Ragan and Brittany.

Lane has no balls…why is everyone promising that stupid self-centered spoiled brat they won’t put her up? My God do they even want to win the money. Jury votes my butt something is going on between Lane and Brit. Stupid move worse than Marcellas giving up the Veto on Amy. What a jackass. I hope to hell Hayden goes home for that stupid move.

Why are people interpreting Haden going up as a sign of anything? Brigadoon has been talking about the replacement nom for days. Lane has spoken to Britany about it. At the end of the day, Lane is guaranteed only one vote in the jury house – Britany’s. Why would he jeopardize that? And why would his fellow Brigadoon freaks expect him to? It is a “nomination” in name only – Regan is the one going home, the other guy is just filling a seat.

hayden better not go home, brit has gotta leave, & so those ragan. ragan first, then brit. when hayden winds HOH…which he prolly might; cuz he noes its important, and i notice how he wins things, when necessary. he’s gonna take him out.

no lane made the only move that will guarantee him the money
all he needs to do is get enzo out and that should be easy enough b/c enzo isn’t really a competitor, he has one thing and that was when there were only 5 people in the house. Lane, britt, and ragan=final three= lane winning

I think Ragan is going to tell them off. He has an extensive vocabulary and he’s going to put the dumb dumb in their place. I hope they vote out Hayden instead of Ragan. I didn’t like Ragan for what he said to Rachel, but he’s the only reason why I’m still watching. The rest are boring and mouthy Britney is very hard to watch.

if lane takes brit to final 2, he ill lose. brit thinks she has all these fans, lol

im a fan of Brit.i think shes funny.and i think anyone who goes up against Britney in the finals will lose.enzo probably has the best shot.

Maybe Ragan is going to threaten if they vote him out that he’ll tell everyone in the Jury house about the Brigade so they don’t get any votes. Plus, that would turn Britney
against Lane , because she said if she found out he was in an alliance she would
kill him. If Britney wins the next HOH that could screw Lane. Vote out Hayden, and
Britney would be so pissed off at Lane she will align with Ragan and Enzo and they
could vote Lane out .. Final three Enzo, Ragan and Britney

I hope Enzo, and the little girl votes to get Hayden out.
One obvious reason to save Ragan. He’s smarter than all you knuckle heads combined.

there is not one person in bb this year worthy of winning. worst season EVER. Brendon would come the closest. At least he tried.

All I can say is thank goodness Rachel and Brendon weren’t still in the house when
the HG’s had to do all that dancing.. I don’t think my stomach could have taken all
those lap dances she would have given him.

I think Enzo is on to Lane and Hayden being too close. I’m hoping Brittany votes out Hayden since she really knows Lane likes Hayden better and then Enzo follows suit and also votes Hayden out. Lane would be shocked.

Layne was in deep thought last night. I think he realizes that he shouldnt of opened his mouth up,about having loot!!!!!!!!!!!…

Hope Brit wins the HOH next, she has to and get Enzo out, she has a better change of winning in the final two against Lane and Hayden.

I still think Lane and Brittney are the ones really engaged! We have NEVER seen Brittney’s older brother. I think the pic that is published that is supposedly, Nick, is actually her brother. If Lane and Brittney make it through the entire game and get to the final 2, they will make a bundle because they stumped the house and the audience! That is my story and I am sticking to it!!!!!!!!!

Ragen looks like the floops fooglie things from Spy Kids !