8:40am Big Brother wakes up the houseguests…

SEE what they CAN’T show you on TV! Superpass 3 Day FREE Trial


OnlineBigBrother.com 9am Matt, Ragan, and Brendon are on the backyard couches talking about Annie and the votes. Brendon says that she should just leave with some dignity. Ragan says that he appreciates her fighting though. They start talking about the saboteur. Matt says that someone said that he (saboteur) comes every episode so there should be one today. Ragan asks who are the only people in the house who haven’t had any alcohol… they start listing names.. Britney, Kathy… Matt says HMMMmm.. and Britney always talks about getting drunk at home.. (just then the feeds cut to we will be right back) When they come back .. Ragan is saying maybe they would make a special exception to the age rule. Matt says MMmHHmm. Brendon says he has a pretty good lie-o-meter. Brendon says what we should do is ask her more questions about her fiance. Ragan says I don’t think that’s really a big deal… but that the age thing would be something bigger. (They are thinking that Britney could be underage because she doesn’t drink in the house. OnlineBigBrother.com) Matt says so we don’t definitively know that the saboteur isn’t one of the life long friends do we? Ragan says I think its 3 different people. They are joking around and laughing about the saboteur. They talk about what they need to do today… they figure they will be doing their diary room goodbye messages. 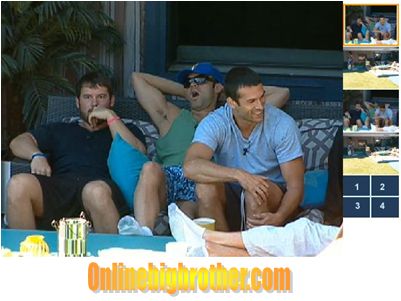 Is it just me or does the audio really suck on the feeds this year?

im glad im not the only one then !! yeah audio sucks,the side windows are always messed up,u cant go full screen,i really hate it !!(the only good thing is that its faster then real player)

Monet is another spoiled jealous “girl”, Britney is a tard!

I don’t get why Brendon says Annie should just leave with dignity. Would he? I’d be disappointed if she didn’t at least try to stay. She’s going about it the wrong way but if you’re willing to just walk out without trying then you don’t deserve to be there.

cause she is begging !! really pathetic of her! she is a looser alls he does is talk smack about the hg,especially the girls….

So, I guess you’d rather watch someone just say “Ok, you beat me, I’m just gonna sit here and be nice to everyone until you vote me out”? Or would you rather see her trying to scrounge for votes?

I don’t get this intense hatred for Annie right off the bat. Just like with Ronnie last year. I was never a fan of his, but the way people seemed to want him dead just never sat well with me. Do you want entertainment? Do you want to see people stirring it up and causing drama? Or do you want to see a bunch of people sitting around holding hands and loving each other?

I’m with you Emme.

I agree also. But there is nothing wrong with calling a spade a spade. Ronnie deserved the hatred and Annie has done nothing but whine the entire time she’s been on the block. She could fight to stay in the house with a little more dignity than she is showing.

The smart move by Annie would be to simply find a way to convince Hayden (current power) by pointing out the smallest alliance currently in the house and in BB history (Rachel and Bredon) and that she would be willing to do A, B & C to stay over Rachel. If convinced, Hayden would be able to save her.

By continuously BOTHERING Hayden and the rest of the house with her nonsense she has nailed her coffin shut.

simon…….. do you remember what post it was where you mentioned Kathy talking about her daughter looking like brit…….. because the first day she only mentioned having a son and a few days later she said his name was shane……… then i read on here she mentioned having a DAUGHTER close to brits age that kinda looks like her………. She has also stated she only has one child as well so i wanted to re read that post to see if i missed something

sorry ladyswag i don’t remember which post it is in..

why can’t they get annie out next week? that would be so much smarter to kill the showmance now because while jeff & jordan was more of a weak power who got really nluck the entire time, brenden and rachel will be stronger because their both smarter… annie is not threat while branchel is a big threat

It makes no sense to get Annie out this week. It’s just personal and nothing more. These people aren’t thinking with their heads and just say “well she could be the sabateur” so they can feel better about their decision.

watch Annie will find a way to stay, I have a gut feeling she has gotten more votes than people realize.

from the first day i said annie was my favorite then ragan ( yea i kno the two gay people) but they seem like 2 of only like 3 real people in the house this season. Rachel is jus for entertainment. In the weenie challenge she didnt hesitate to take her shirt off and now she says “I’ve only known you for 9 days, but I like you more than people I have known for years”. I think she just fast and easy. Plus why would BB get rid of the saboteur 1st and then to tell the houseguest. Let them think that the saboteur is still there.