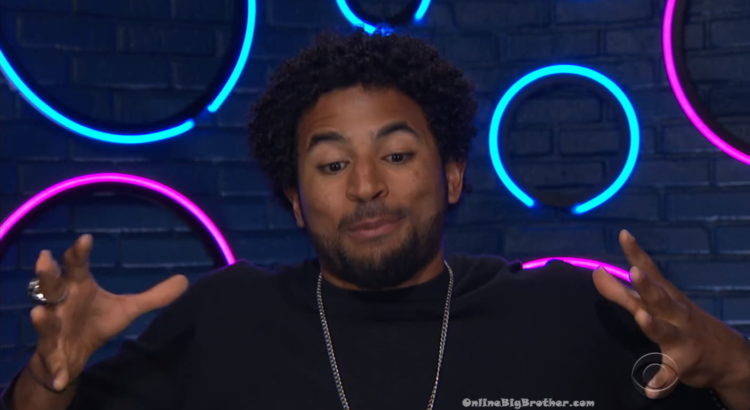 Here we go the start of a new season of Big Brother. The cast looks great on paper. That’s reasons enough to be optimistic for this season. I mean look at last season it couldn’t get any worse.

The ranking is back up for BB23 now with a new value.. ZERO! – RANK THE HOUSEGUESTS –

Meet all the new Houseguests before they move in with Paramount+. Try it FREE! 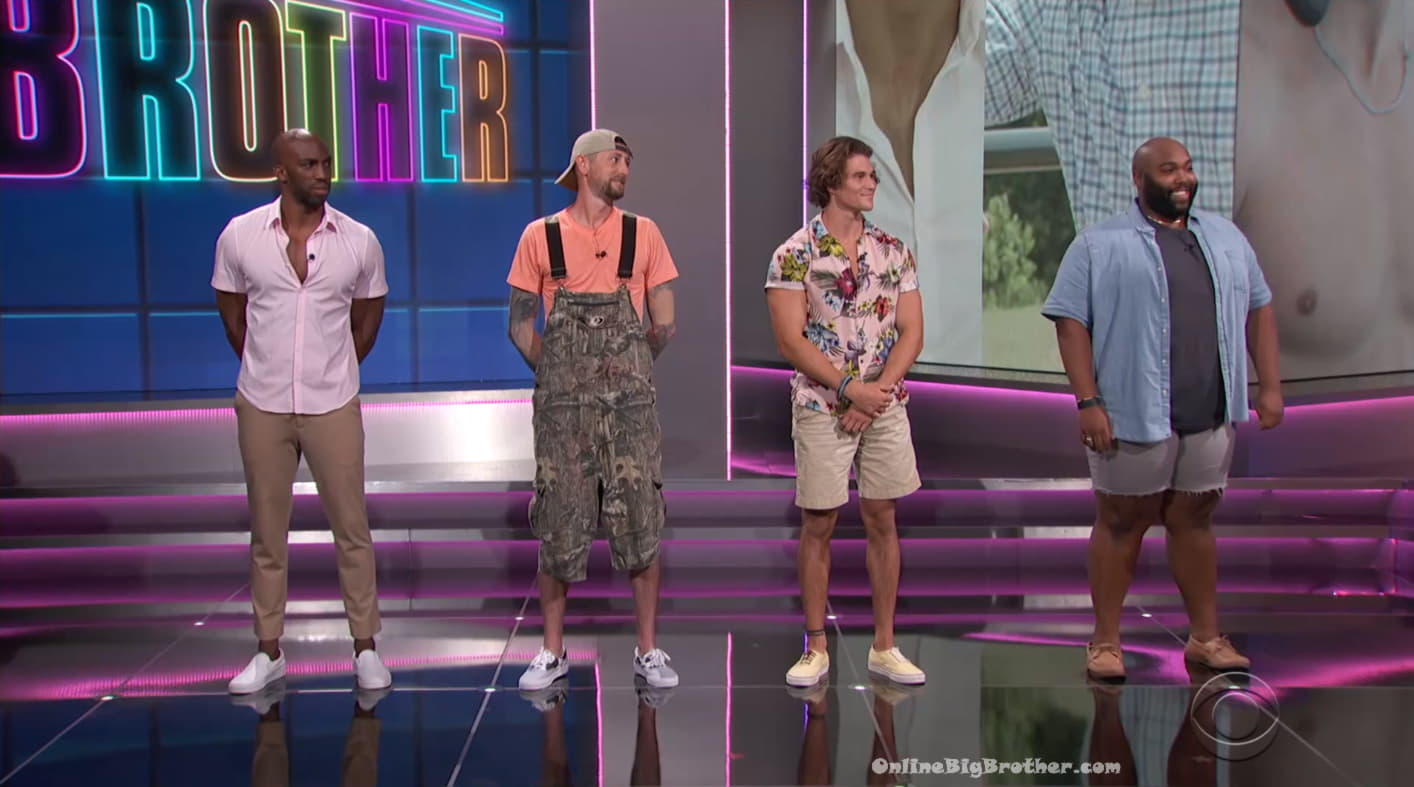 First group to enter the house 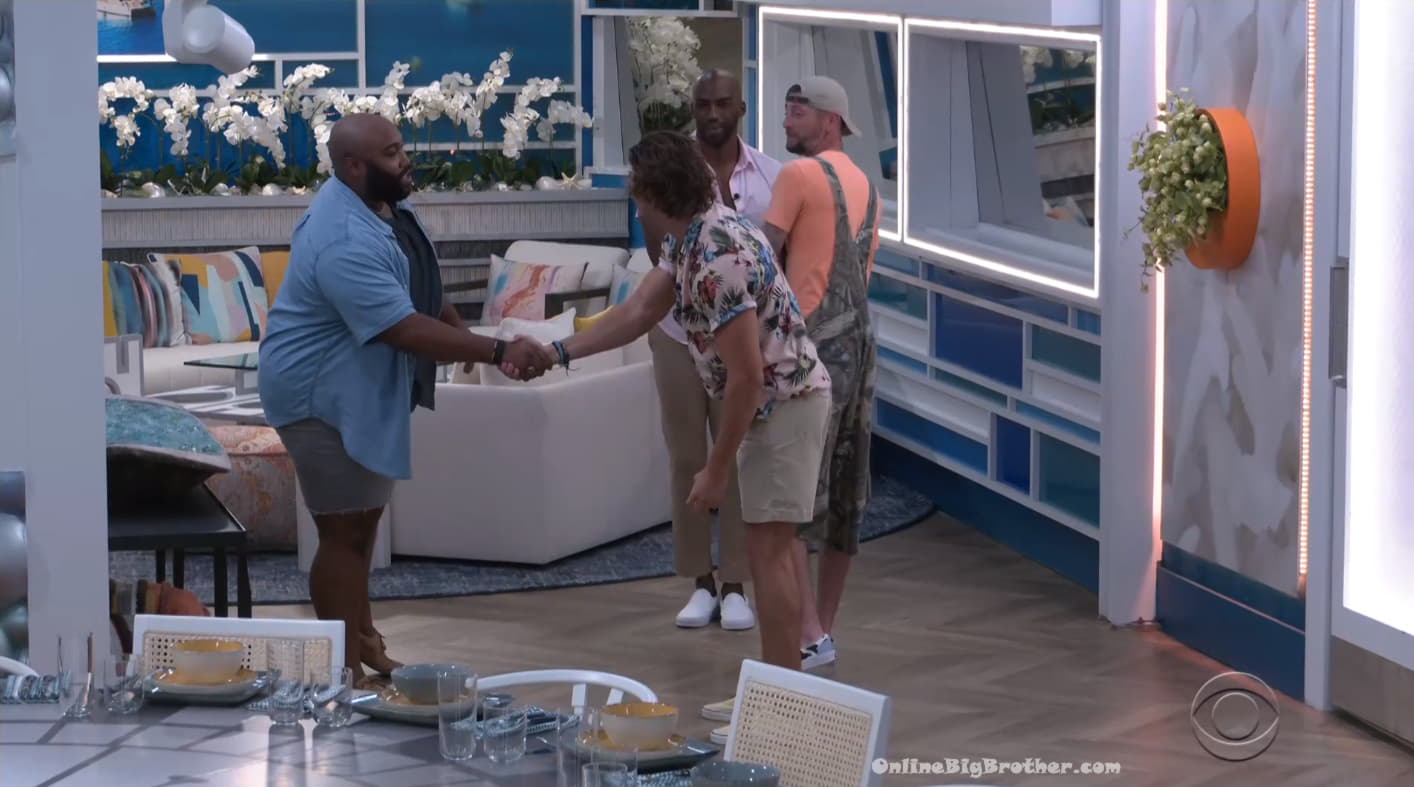 DerekF is the first to walk in.

The First four compete. The winner gets to compete in the Head of Household Competition. Frenchie wins 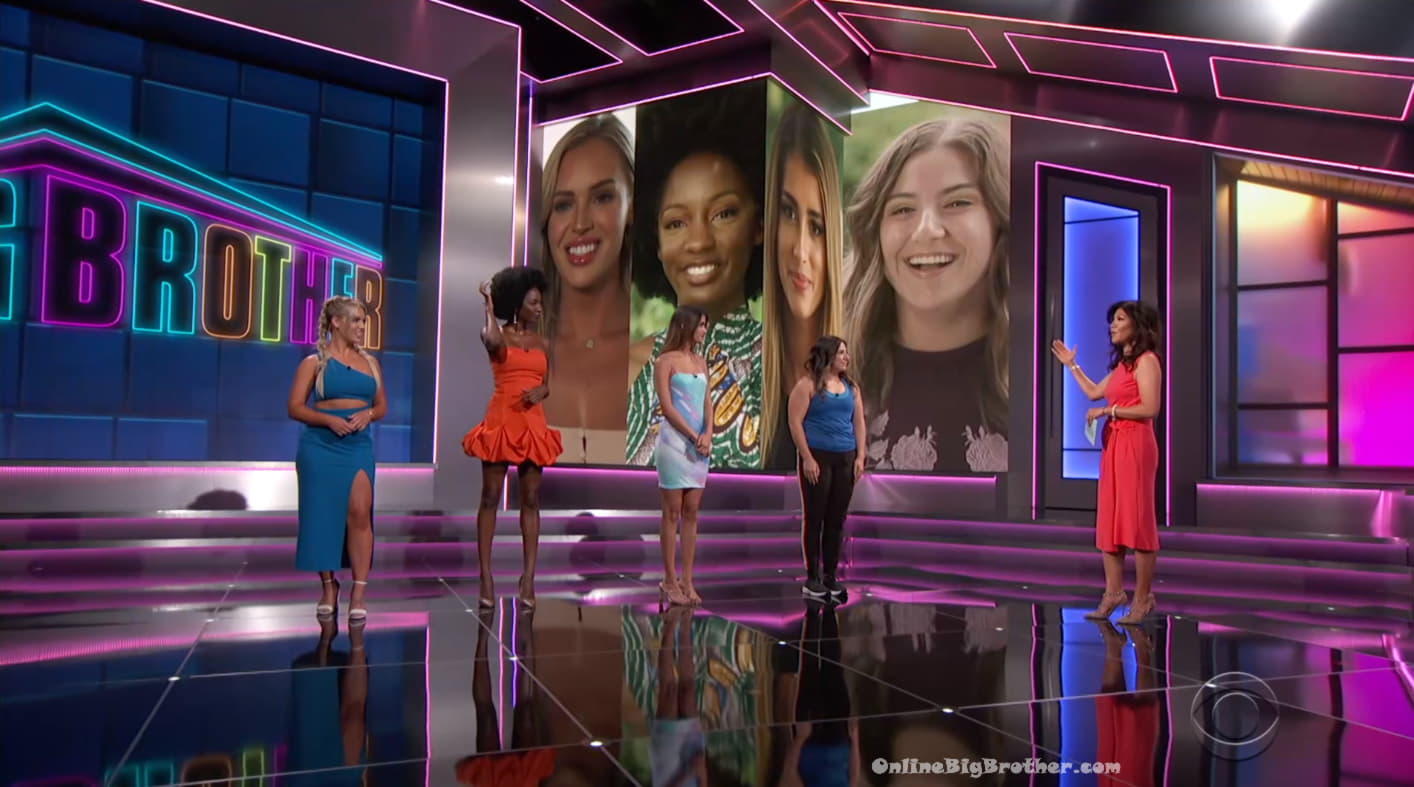 Second group to enter the house 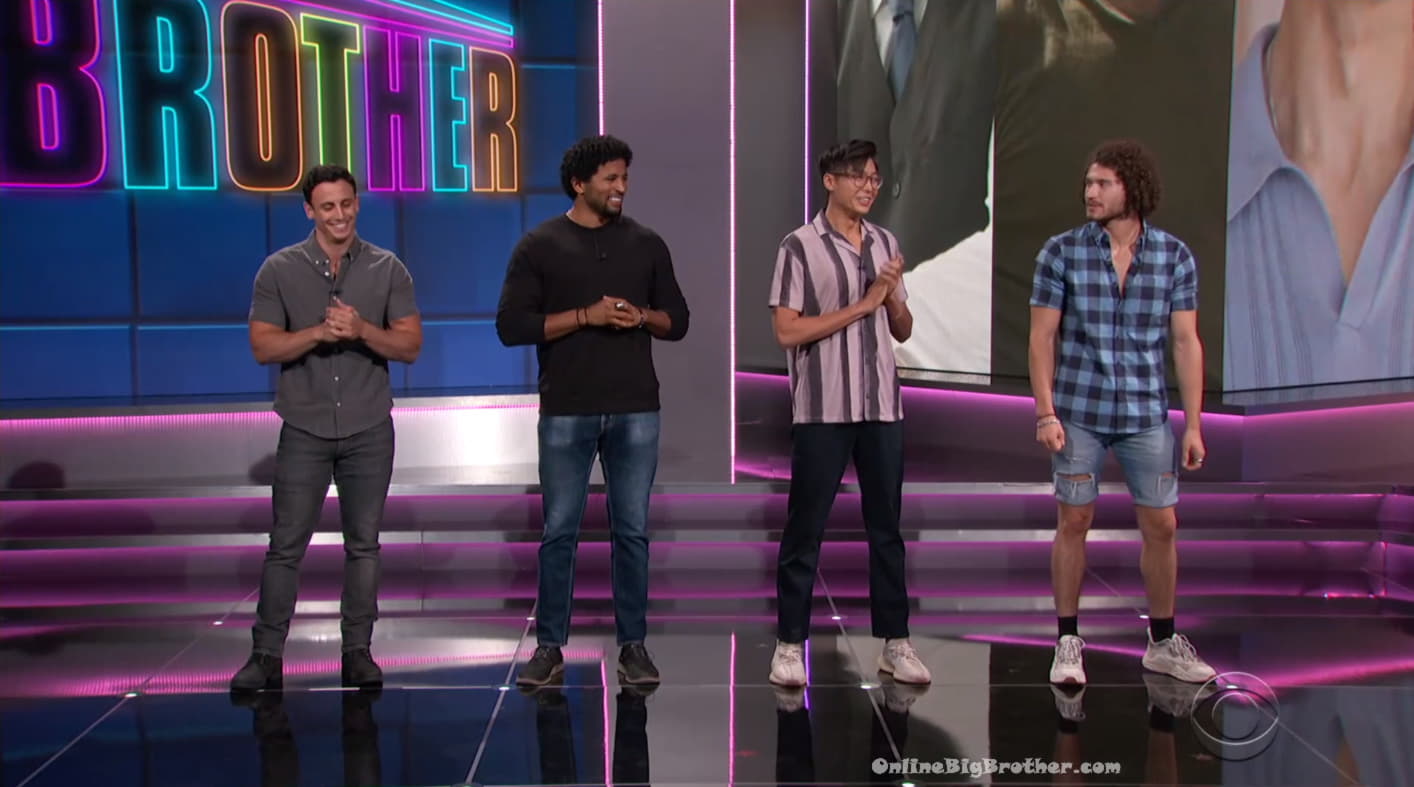 Third group to enter the house 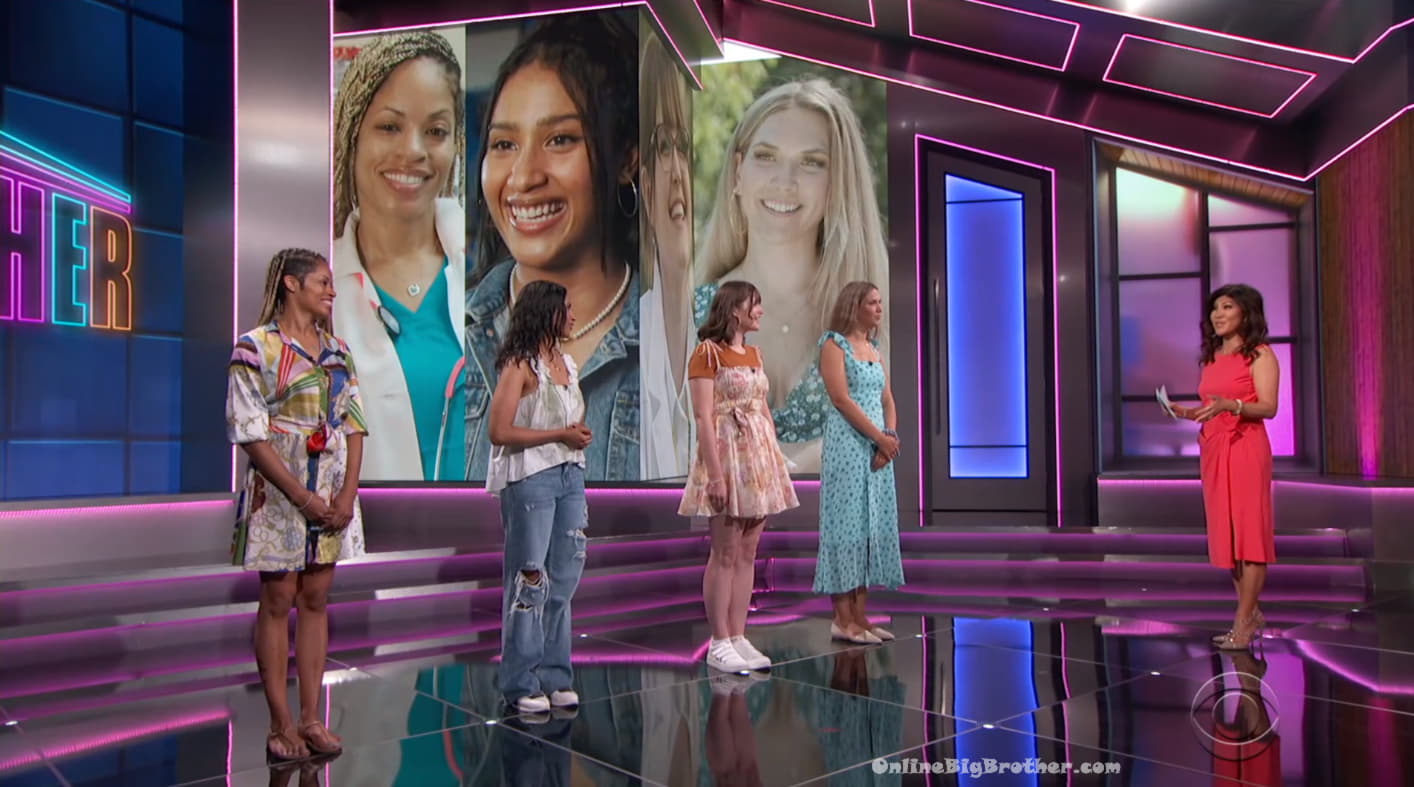 Fourth group to enter the house

Claire wins the competition
Claire, Frenchie French, Whitney, and Christian now get to compete in the Head of Household

The Team captain are 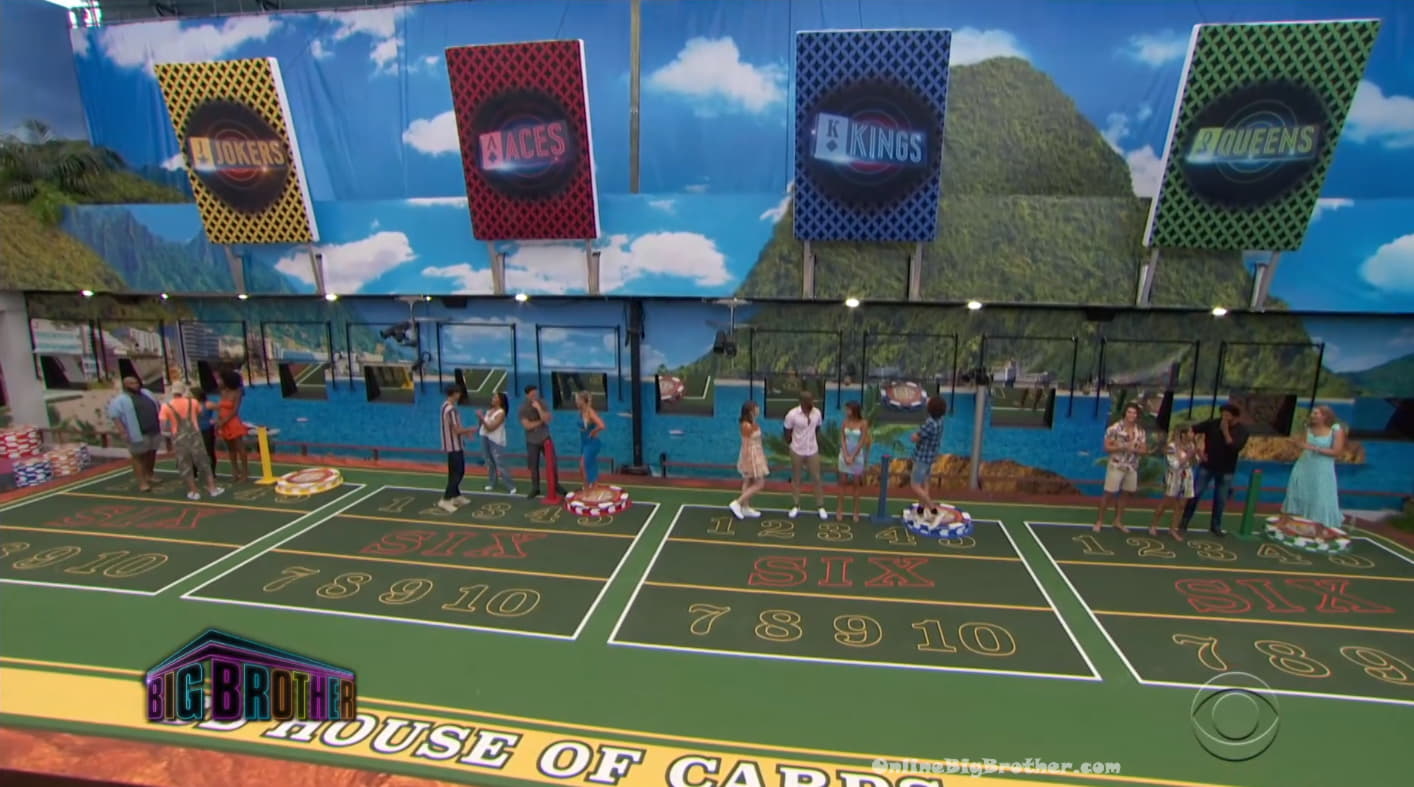 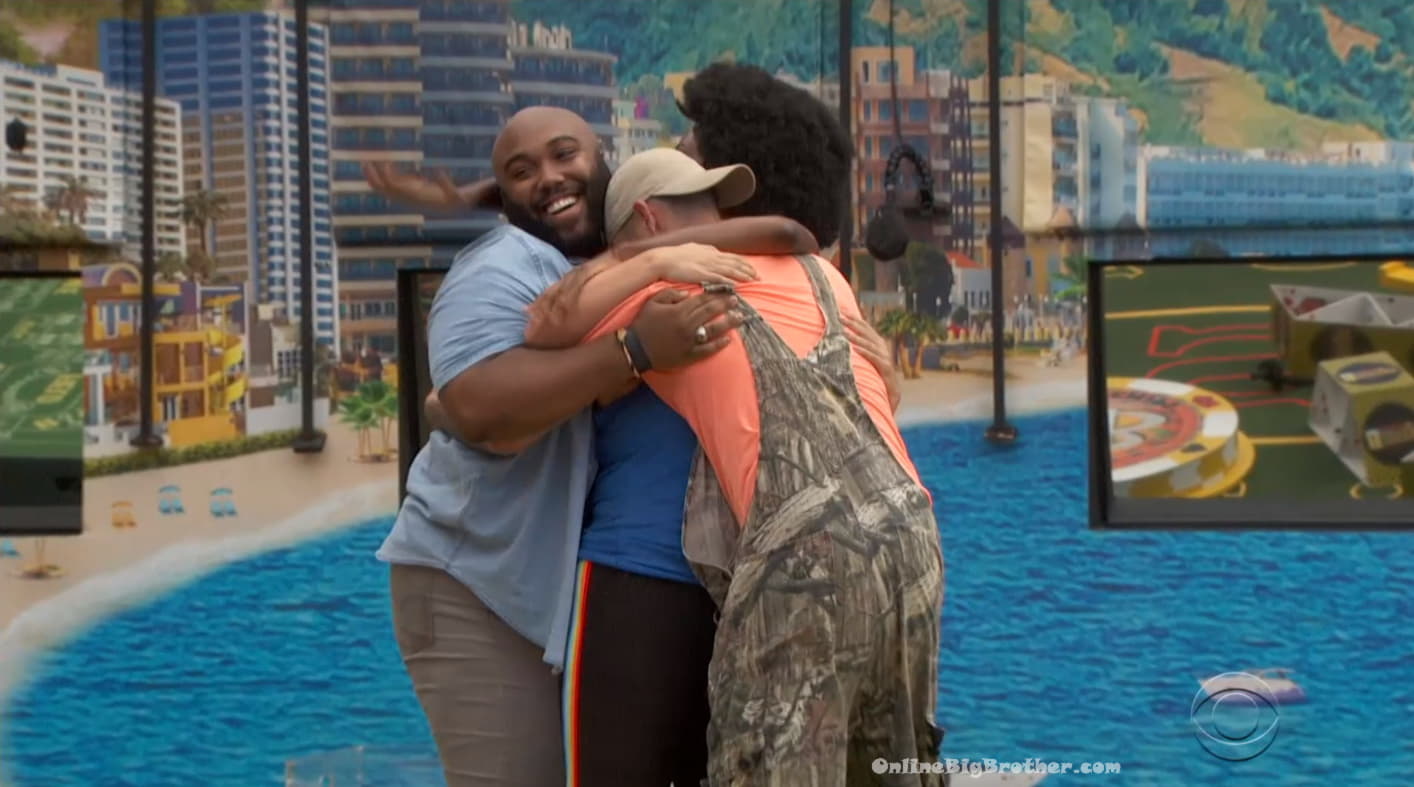 Frenchie French and the Jokers win the Head of Household competition.

Queens come in Second. Aces come in Third and the Kings are last. Kings will be have nots for the week. 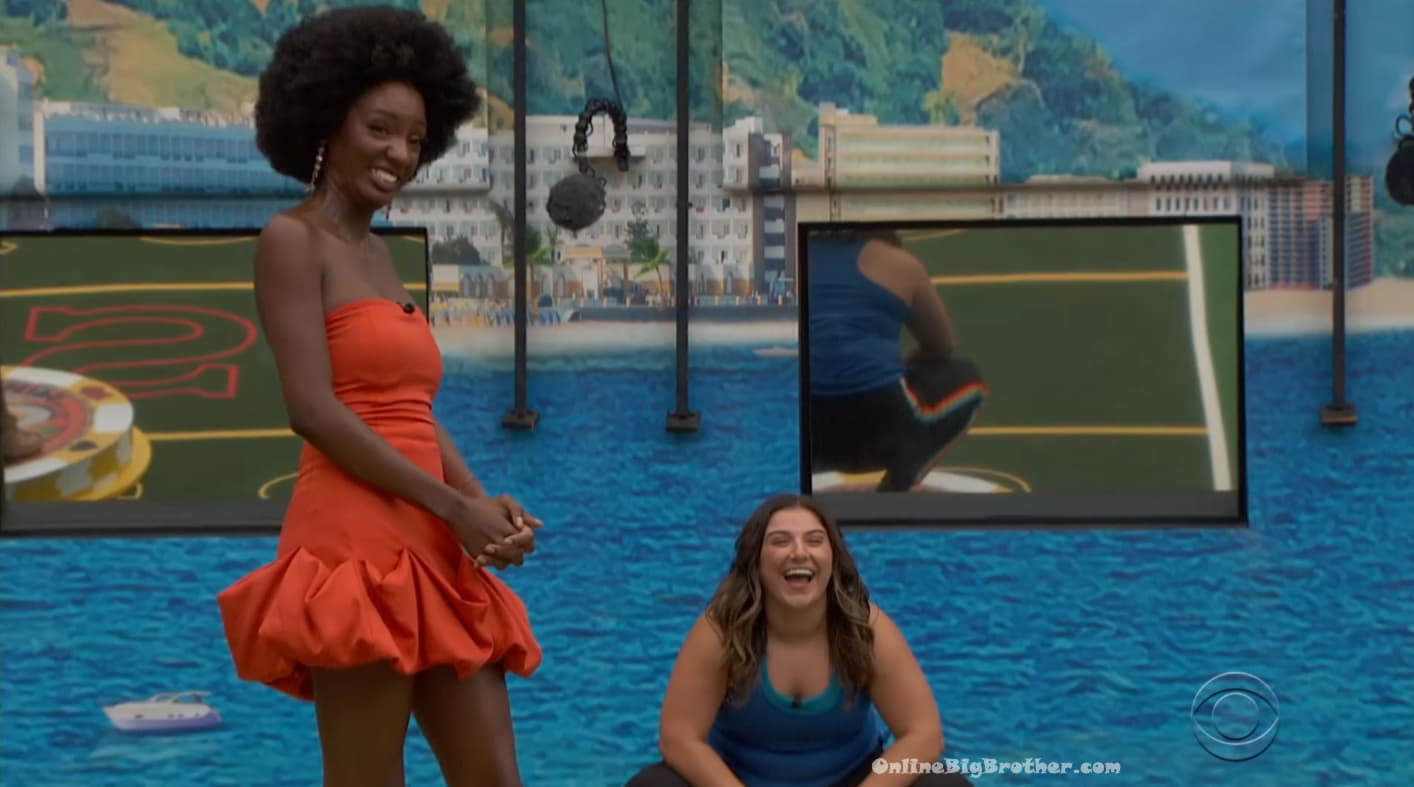 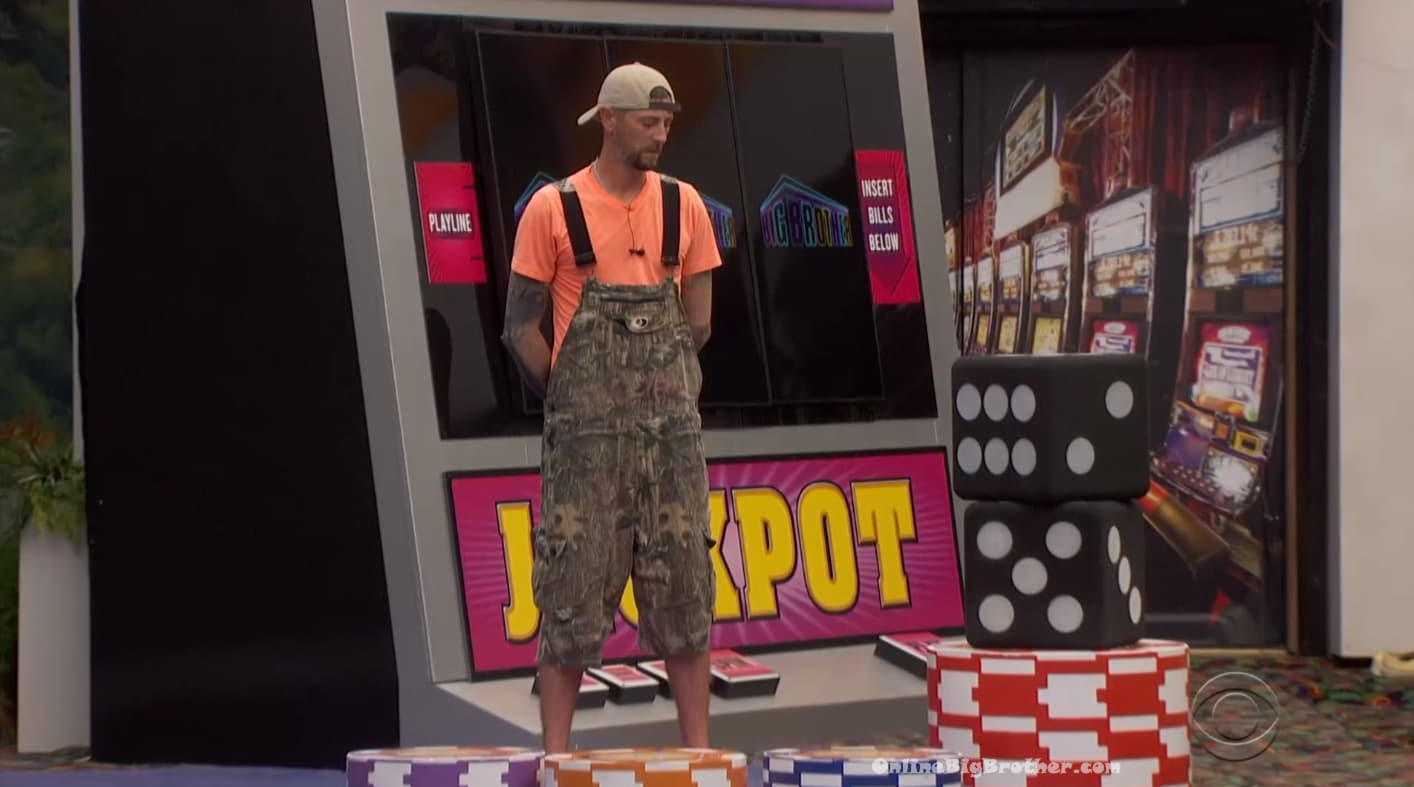 Frenchie offered a deal called double or nothing. If he rolls the dice on the table he gets 2 weeks team safety if he fails he’s no longer HOH and his team is eligible for nomination. Claire would then become HOH.

Frenchie turns the offer down. 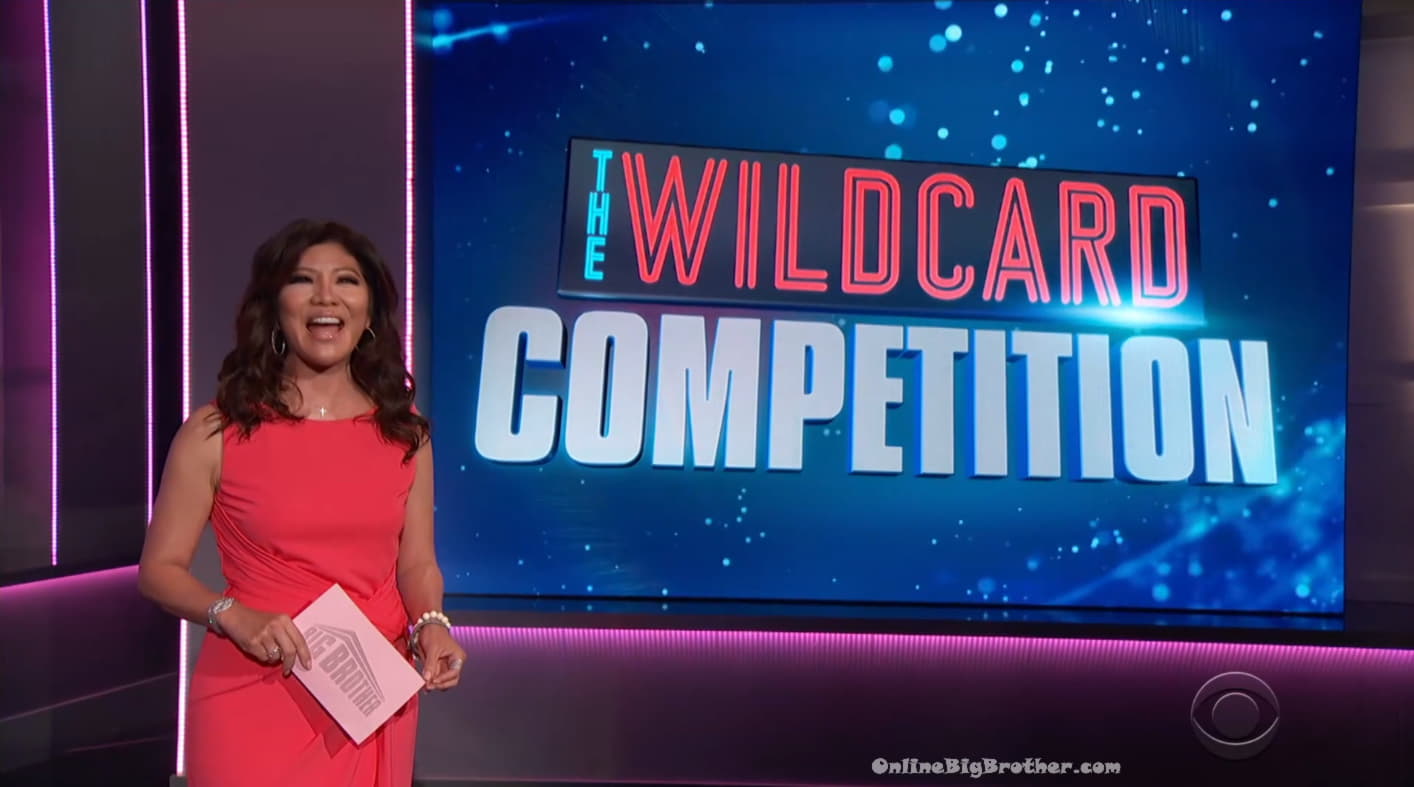 I am trying really hard to find something redeeming about Christian

I’m going to need to add a couple of people in the Amanda Zuckerman category soon.

Julie said it was live right? so when feeds come on they will only have been in the house for 3 hours?

Yup. should be some good fun 🙂

Hi Simon! Hopefully this will be a good fun season!!

Heres somthin for everyone to get in the mood, since it seems to be missing from the show and the pre-feeds
https://www.youtube.com/watch?v=58UXX7yUicI

Janelle is way better than Nicole.

Could Whitney be my new Janelle? Oh pleeeeease.

Overall, the cast looks good. More diverse. I have also become aware that casting is new this season (Kassting still taking applications for BBCan10, though…).

Alyssa is a likeable and more physically attractive version of Analyse with a stronger work ethic, just not as physical or athletic.

Caleb….err, I mean Christian, is going to Caleb this season. He already picked his Amber with his first overall pick, see above. (*To add to above note, Alyssa will spend all her time with Sarah as they talk about clothing and designs, while also experiencing a showmance attraction for someone other than Christian, most likely his Tyler-triplet Travis (say that three times fast) — her work ethic and his living with parents will be the first of many deal breakers for these two — so he detonates his entire team and gets used as a shield while always thinking he owns the house.

Tiffany stars in the role of Dayvonne, the single mother with fire, drive, and passion to win the game more for her child than for herself. Will her power of intuition be strong within the BB House, or will she misread her information and mistake others for who they are to her in this game. (*To add to the above notes: Christian should’ve taken Tiffany over Alyssa to build a stronger team, instead he fell for his crush…also, not only would have taking Tiffany made his team stronger, Alyssa would’ve been upset by not being chosen by him and maybe more likely to have a chance with her…*Christian ranks lowest on my player board)

The Queens = strongest overall team, will be important to see how they all gel.

The Jokers, as the saying goes, “are wild”. The hold the power this week, but next week will have some blood on their hands. Turning down the deal was dumb, because it was the easiest challenge to win since Kaitlyn’s puzzle. Hell, I don’t think Frenchy really wanted to see if he could win it during that awkward forced attempt….and folks, this was not live, I repeat, this was not done live. It was taped. Their outifts were from earlier this week. The 3-hour delay for live feeds is not because of the time zones and viewing on West Coast, it’s because they’ve been in the house for a few days.

The Kings are by far the weakest team. This means that the Aces are the dark horse that won’t be noticed until later in the game…unless internal drama stirs and tears them apart. That’s the funny thing about Aces, they can be kept up your sleeve, they can count as 1 or 11. Use them how you want, use them as you need; but in the end, they are still Aces and will beat your wilds, your Kings, and your Queens.

It seems (hopefully!) to be a cast that wants to play and compete. I don’t think half of them are the fans they say they are…(*see: Frenchy talking about his note taking, yet in a pre-entry interview he was talking about how he doesn’t think he could be as loyal as Derrick and take Cody to the final, when it was truly Cody who took Derrick to the final….Derrick was grooming Victoria to final two and would’ve cut Cody as his final big, hard move).

I like the teams twist, I do hope that it remains for at least 5-6 weeks of evictions. The massive alliance for the first half of the season has been ultimately boring, and the final half of betrayals and moves are never near enough to fulfill the season. We need a season that starts moving from the beginning, as the weeks progress, we may see a Survivor twist with Julie being replaced by Probst and asking everyone to drop their Buffs.

Looking forward to a good season of gameplay. (*Sidenote, I was able to catch Big Brother Australia, what a much better game with the different challenges. Add in how they have to earn a grocery budget and order as a house…oh, and punishments are paid.

All the best to everyone out there!

Hey Simon and Dawg! Thanks for having us back for another season!

Just so you know, the guys already posted in one of their pre-season posts that the team twist will only last for the first four weeks of the season, so I’m assuming that means no more than 4 evictions will occur during that time unless something weird happens. Good post though, and I just wanted to let you know.

Good to know, thank you! I do wish the twist would last longer, but they never really do.

I like Frenchie so far. You can tell he has a heart of gold!

This group seems to be more intelligent than the past couple seasons!

The Foosa
Reply to  Backseat Driver

I’m biting my tongue, but it’s obvious they are trying to change perceptions of a certain “sector” and increasing their odds to 43%…Teams suck but it worked well in BBCAN to get the results they wanted….

Oh, so glad you are BACK!