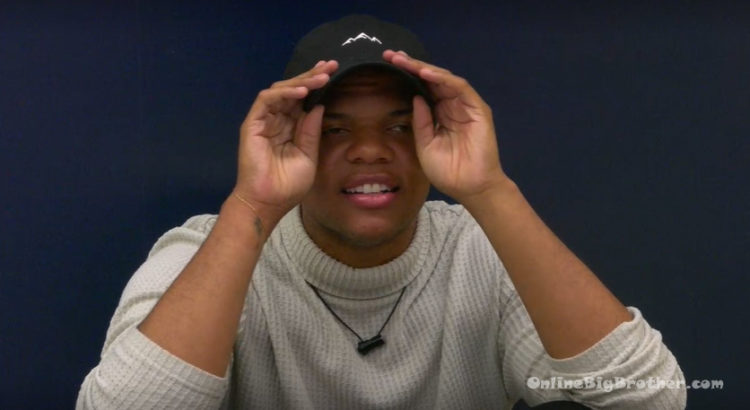 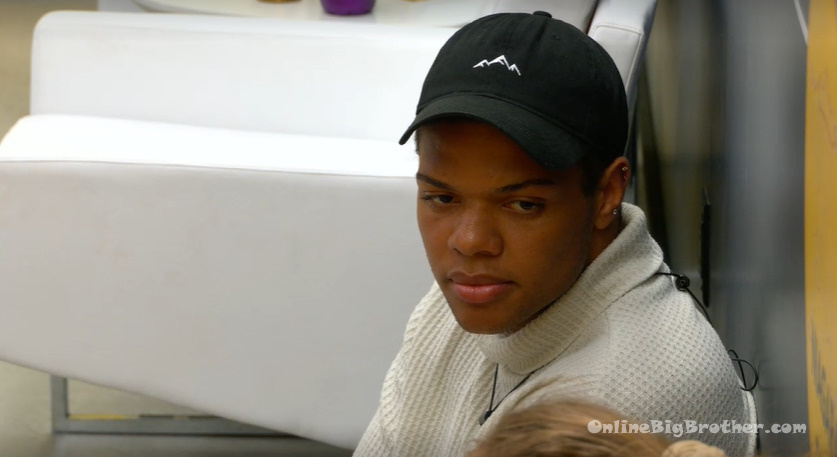 10:30pm Beth and Breydon.
Beth – they just want to slide through. That’s what Jed, Ty and Keifer were saying. Keifer was like nope, I am not even discussing it Breydon is staying. Like if you guys vote the other way then Breydon gets my vote. And then we were like boosting their ego like yeah that sounds awesome. So we are kind of thinking .. well we haven’t said it yet but if we just told them.. Breydon – to vote that way? Beth – That way and then next week they are like.. out. Breydon – yeah. Beth – like they’re isolated. Breydon – yeah 100%. Beth – right, like you have to believe me. Breydon – oh I will. Beth – and Keifer was like there is no way Breydon will go out. Austin in going. Like just so you know this is straight up what is happening in the house right now. Breydon – which is what I assumed would happen. Beth – I will literally Brey.. tell you like f**king 5 minutes before the vote and as soon as I know if its flipping I am coming to you. Breydon – okay. Thank you. Beth – of F**King course and I would expect the same. It is not happening that way like I am not even entertaining the idea. Breydon – well thank you. That means a lot, like I am actually really stressed. Beth – like you are literally one of my people in this house, like you can’t go. I think its weird, like if I can be honest with you. Austin is isolating herself. I think that she is sad. I think that she feels betrayed. Obviously she knows a lot of people lied to her. And there wasn’t anything I could do.. my hands were tied. Breydon – no, that’s what I am saying. Beth – I am like really awkward around people that are mad at me. They talk about Vic and Beth brings up how she is so mad at Austin. Beth – I would like bet my life on it that you’re staying. Like no one is even talking about it. But as much as I say that.. Austin is going .. its terrible. Breydon – its literally the greater of evils .. you know what I mean? Beth – I know. They want you out.. just so you know . Information is f**king power .. like lets hold onto that sh*t. Breydon – of course. Just know that you do have the numbers and we can trick them. I wanted to trick them but what does that do other than annoy them. I like literally want to be like f**k off! Like you guys are annoying. Breydon – yeah that’s all it does. Beth – I am just tired of them walking around and dictating what happens. And then other people make the move and they just sit back and they didn’t do anything. That’s it ..you have to trust me. Breydon – of course. 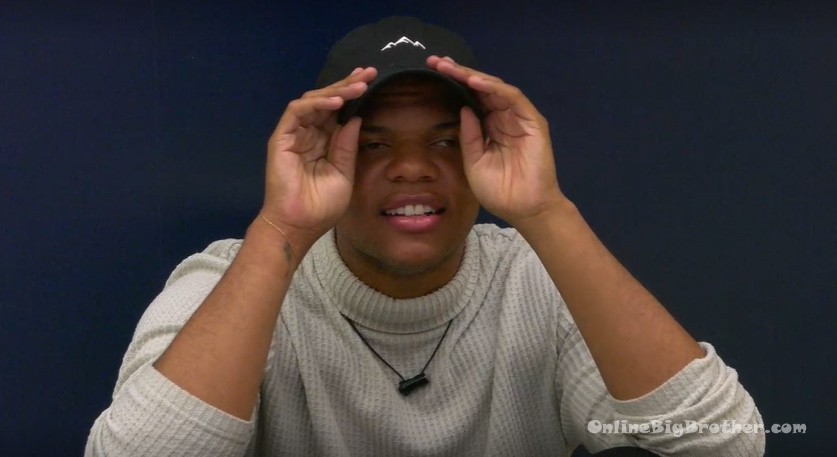 Backyard. Beth and Ty.
Ty – who’s next. Beth – that’s what we should be talking about. And I personally think Roh should be next .. but we need him. Beth – best case scenario is that Breydon wins and takes a shot at Tina and Tera. Ty – why do you want Tina and Tera gone so bad? Beth – why not!? Do something for us! Ty – you want Roh here!? I would rather have Roh with me than Tera. Ty – okay.. if Roh and Tera are on the block, you would take out tera? You know what I mean? Beth – no we take out Roh. Ty – I am just thinking that yeah we could take out Tera but we could take her out any time. We keep saying that and pushing it down the road. 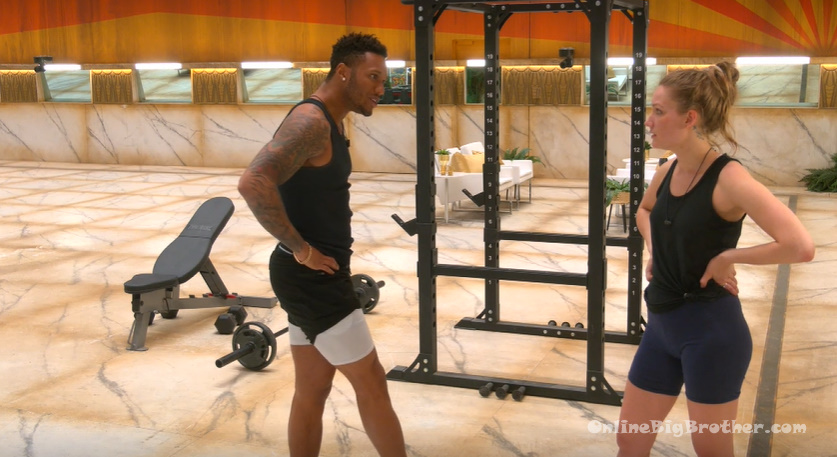 12am Ty and Jed.
Ty and Jed going over the votes using Oreo cookies. Ty – next week one of us wins .. Roh and Tera go up. That means Breydon votes with us and Vic. We send Rohan home. And then we still have the numbers for the next HOH.. in theory. Jed – right. Ty – Did she (Beth) tell you about how she wants to try and work something with Roh and make it seem like she is playing us. Jed – yes. Ty – its a good idea but is it too soon .. I feel like it is way too soon to execute. I think she has to put it in motion and try and get an idea of when he would want to put us up so that we’re safe even next week. Jed – yes, I don’t think it would be a next week thing. Ty – I think its an after next week thing. Jed agrees – its planning for something at least 2 weeks away for Roh. I don’t even think Roh would put us up next week. 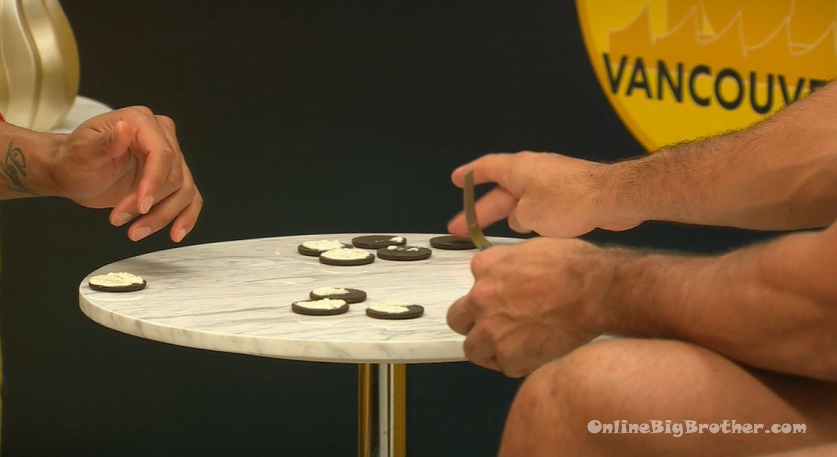 Wait for it.
Episode Edit:
Tonight on Big Brother Canada Social Siren Beth has the men of the house following her every word, and the Mastermind Sunsetters control another week, even with an Invisible HOH. With King Kiefer at the helm, their fortune’s couldn’t be brighter. Watch as the unstoppable power alliance tricks the In-Vic-sable HOH to target her closest friend.

Did it happen? No. Will that matter to the episode edit? Not really, given last week’s edit.

With Ty and Jed’s new plan to create a new alliance with Vic called the Ghost Peppers, HERE is what is going to happen:
Ty is going to flirt with Vic the same way he flirted with Austin until after Veto ceremony of her HOH.
They’re hoping the house won’t view Beth as a threat anymore, and will instead target Vic.
The house already suspects that Vic is being moved into the sunsetters and playing both sides.
The only person that will potentially buy this is Rohan.
But. Does it have the potential to be real? Could Beth, who helped concoct the plan, really be trying to find a way of cutting one of her two guys (Ty) in order to secure her final two spot? It’s possible in edit spin.
Will Ty and Jed get the manwhore treatment the same way a female houseguest would? No. Will Ty get season 16bbus Christine/Cody treatment for moving in and flirting with Vic? No, but if she responds SHE certainly will.
Vic, if she falls for the alliance, will be emboldened to target Beth. Wait for it.
This plan is dumb. It feels like a Jed plan. Every Jed plan is a thinly veiled dick measuring contest… and given what Beth had to say on that subject, maybe he should rethink that.

This is what happens when an entire alliance that is aware they are being given golden edit treatment begins to feel too comfortable. They all believe nobody will target them, and start coming up with stupid tricks to be fancy in order to trick people.

Last week I’d have almost felt pity for Vic. But now, i’m in the go for it, give the sociopath a taste of her own medicine.

Beth or Vic revealed the Pink Ladies. sideye… god i hope that’s not a euphemism for something because reading that sentence standalone sounds a little… hmm is that code?
Well that sort of blows up the chances of Beth actually riding the middle somehow. again. not intended as code. Man, every Beth sentence is like half double entendre half dirty limerick.
What’s funny to me: the only thing that seems to unite all of the fans on either side of the debate this season: they all dislike Beth. Even the most ardent sunsetter fan will say “Beth… oh you got us on that one, you take her.”

Looks like Ty & Jed figured out Vic’s Achilles heel. Jed finally told her about the trio they created called the Ghost Peppers for her Jed & Ty (she’s including Keifer but the guys didn’t).

After Jed told her & left the room she went on an extended happy rant of how she’s going to win the game & made the right decision aligning with JT —and basically celebrating screwing over “Bossy Glossy’s” (her F3 with Austin & Breydon).

She said yesterday she was re-thinking her decision that maybe she did the wrong thing but THIS “proved she made the right move”.

Little does she know the ONLY reason Ty & Jed came up with this (and fwiw Beth knows all about it & encouraged it) — was so the house will target Vic with one of the guys & she’ll be the player cut. They intend to start whispering with her – taking her into closed rooms when people are watching ALL to create a target on Vic & so the others will take her out.

Tera is already clued into the extra chats & whispers and you know Beth will start planting seeds about how Vic is pushing her out.

The question is… WILL the boys tell Keif & if they do will they tell him the truth about it? That will pose some issues for Keif if he knows Vic is essentially the sacrificial lamb & will NEVER move ahead of Beth. AND— will he tell Vic? (that could be explosive!)

I’d say I feel bad for Vic — -but I don’t. She screwed over Austin/Brey who even today want to believe she wasn’t the one who would do this to them. Vic is so desperate to be the lone female among 4 guys — but the guys would rather keep Beth (1st) Keifer (2nd) & maybe even Tina ahead of Keif and Vic can be sacrificed at any time to save their trio or quartet.

Although they briefly considered moving Vic up b/c she saved them — as her invisible HOH draws to a close they are rethinking how she set them up with the others & how competitive she is so they’ll be happy for the other side of the house to take her out.

I’m a bit angsty over this anyway – b/c Vic could’ve really shaken up the house & instead chose to F Austin & Breydon over & then really rub it in with all her EXTRA nonsense.

AGAIN — I remain convinced this HOH won’t count & is an April Fool’s Day joke — perhaps we’ll find out tonight. If when that’s proven correct on Thursday how will the Sunsetters scramble? — I have a strong suspicion (b/c Ty is a decent guy) he’ll want Austin knowing before the eviction that he was NOT the invisible HOH — which means WHEN Aus/Brey both stay they’ll know it was Vic who screwed them over, stared them in the face lying about it & saying how cruel that person was — THAT alone will fire up AB & TNT to win the HOH. And — **Ro CANNOT win HOH b/c he won’t put Vic up even if he saw actual footage of her making nominations he’d find some way to convince himself it wasn’t true.

Still, I’d rather see Ty/Jed on the block & Vic as the backdoor option just so she gets to see firsthand how much the trio really has her back — NOT!!! Plus– for my amusement, I’m dying to see her have to campaign to Breydon & Austin on why they should keep her after what she did to them!

The other little ditty I’m putting into the universe is for Austin to win the Skip the Dishes prize b/c I want Vic (and Ty/Jed) to second guess how her backstab was perceived by the public.